The Pound to New Zealand Dollar exchange rate entered the new week trading at its highest level since August 2020 but may have scope for further gains up to and above 2.0125 over the coming days as the main Kiwi exchange rate NZD/USD struggles to keep its head above water.

Sterling opened the week on the front foot while clocking up one of its largest over an under pressure Kiwi currency that has enabled the Pound to New Zealand Dollar rate to rise more than two percent thus far in the fledgling year of 2022.

While Sterling itself rose against all major currencies during the opening days of the new year the Pound to New Zealand Dollar rate owed around two thirds of increase to losses sustained by the Kiwi, which has weakened further against the U.S. Dollar and remains vulnerable to continued losses.

“We continue to maintain a bearish stance on NZD – there is arguably no G10 currency which has more asymmetric downside risk from central bank pricing than NZD. Negative NZD positions could therefore serve as an attractive hedge against a sudden global dovish pivot in response to Omicron in the coming weeks,” says David Adams, CFA and head of North American FX strategy at Morgan Stanley.

GBP/NZD rate could be likely to remain ascendant so long as NZD/USD is under pressure and would benefit from technical support around the 1.9807 area in the event of weakness over the coming days. 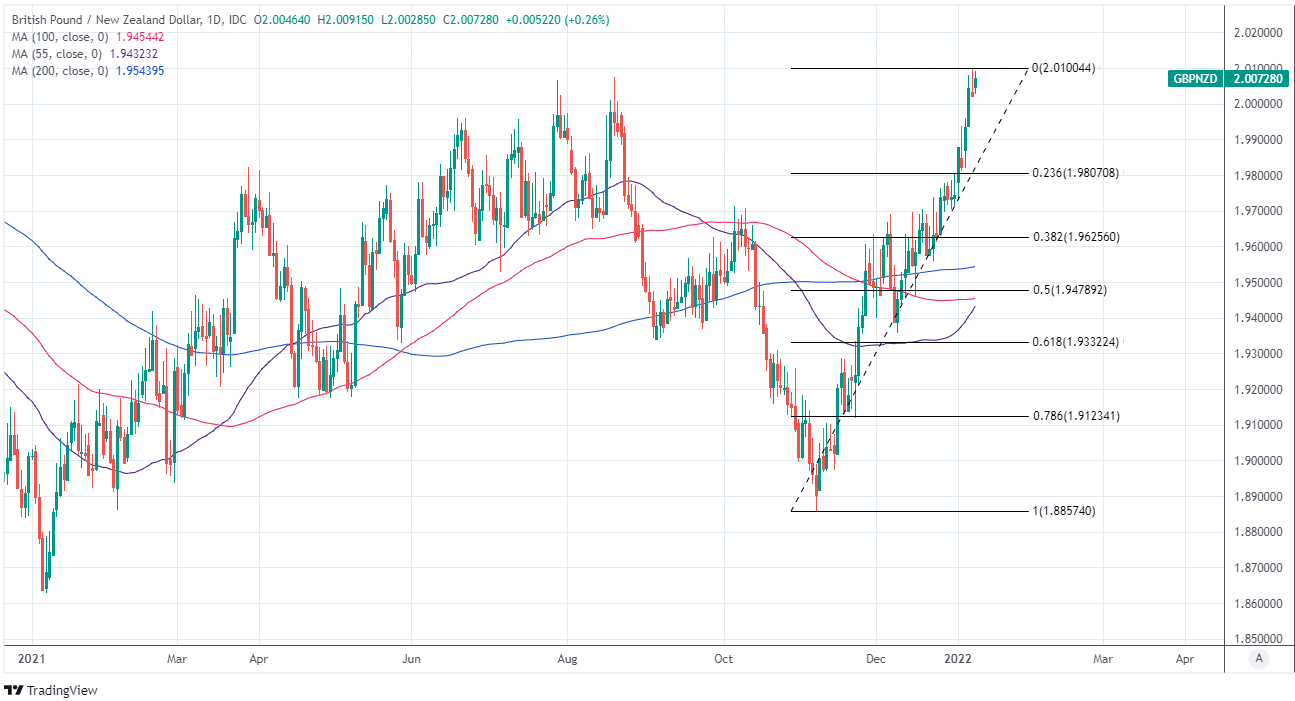 “We said earlier that [NZD/GBP] looks vulnerable to the down side given how much is already priced into NZ, but not UK; here we are,” says David Croy, a strategist at ANZ, who says the next major level of resistance for Sterling is all the way up at 2.0833, with the support for NZD/GBP at 0.4800.

Croy, Morgan Stanley’s Adams and others have attributed the New Zealand Dollar’s ongoing weakness to a combination of market pricing of the Reserve Bank of New Zealand (RBNZ) interest rate outlook, and risks to the bank’s ability to deliver on expectations for the Kiwi cash rate.

The RBNZ suggested in November that its cash rate is likely to rise from 0.75% to 2.25% by year-end, although with the Omicron variant of the coronavirus already delaying a reopening of New Zealand’s tourism sector while shuttering anew some parts of key Asia Pacific and trade partner economies such as China and Japan, the Kiwi economy is less assured than it was at the time of the last policy decision.

“The RBNZ guided that “considered steps in the OCR were the most appropriate way to continue reducing monetary stimulus.” We view this as consistent with 25bp rate increases at each upcoming meeting until the neutral rate of ~2.0% is reached by August 2022,” says Andrew Boak, chief economist for Australia & New Zealand at Goldman Sachs.

“The probability of additional tightening beyond that point is material (45%) - but we don’t think it is the most likely scenario given the lagged impact of policy tightening will likely see a marked deceleration in inflation, rise in the unemployment rate, and inflection in house prices on that timeframe,” Boak and colleagues said following a review of the RBNZ’s November policy update and forecasts.

Risks to the economic recovery and RBNZ interest rate outlook have got some analysts advocating bets against the New Zealand Dollar while the market itself has appeared to be giving the Kiwi a wide berth during recent weeks.

“We continue to see negative risks to NZD best expressed via long AUD/NZD and short NZD/USD (via options). RBNZ pricing remains arguably the most aggressive in the G10, with the market implying an OCR of nearly 275bp (or about 75bp above neutral) by the end of 2023. This suggests that any sort of negative data surprise or dovish response from the RBNZ could generate a meaningful repricing in front end rates,” says Morgan Stanley’s Adams.

This is one possible reason for the continued ascent of the Pound to New Zealand Dollar rate, which would also be likely to rise further this week if economists are right to anticipate that U.S. inflation will rise close to 7% when the data for December is published on Wednesday. 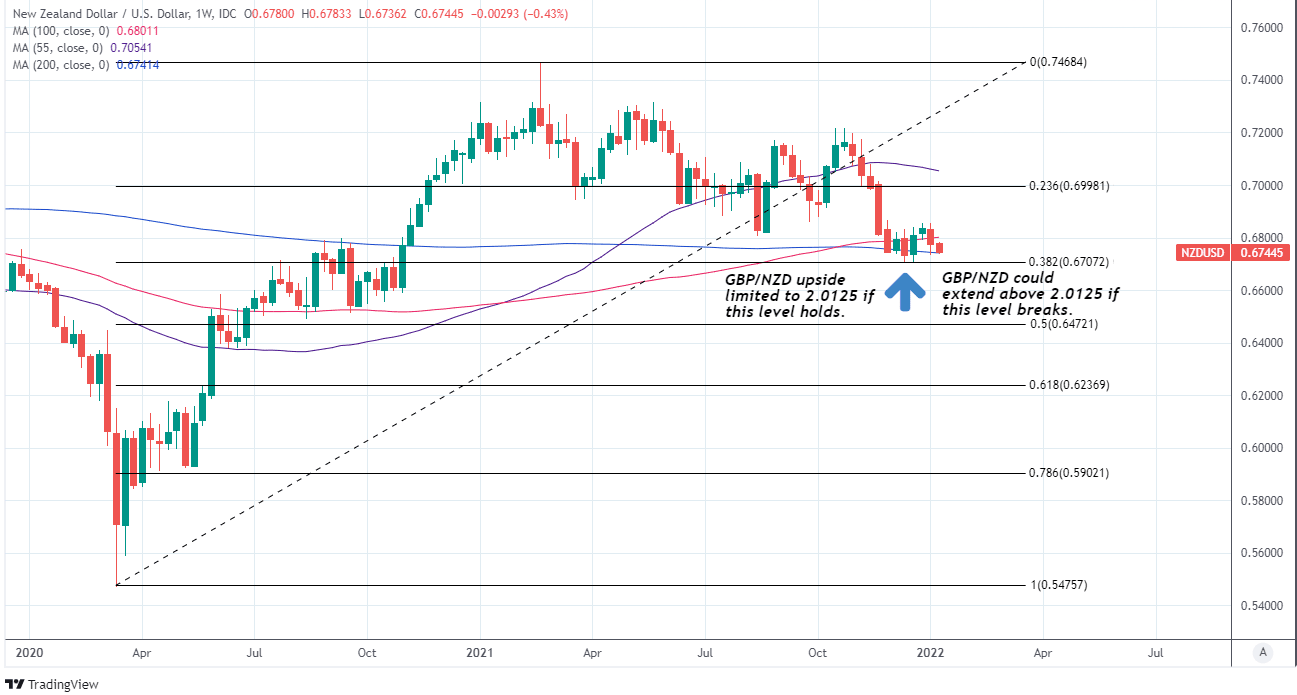 Above: NZD/USD shown at weekly intervals with Fibonacci retracements of 2020 recovery indicating likely areas of technical support for the Kiwi.

The Pound to Kiwi rate tends to closely reflect the relative performance of GBP/USD and NZD/USD, the latter of which is the most sensitive of the major exchange rates to increases in American bond yields that could extend recent sharp gains in response to any further surge in U.S. inflation.

“We maintain our bullish USD outlook, particularly versus low yielders (EUR, JPY) and NZD. The Fed minutes this week conveyed a hawkish tone and implied that both rate hikes and balance sheet normalization might be earlier and faster than previously anticipated,” says Morgan Stanley’s Adams.

Any losses for NZD/USD would likely lift the Pound to New Zealand Dollar rate to 2.0125 or above if they’re significant enough to pull the main Kiwi exchange rate back to or beneath its December 2021 low and nearest level of technical support at 0.6707.

This would be the case even if the main Sterling exchange rate GBP/USD was to decline back beneath 1.35, while the Pound to Kiwi rate would potentially advance even further if NZD/USD breaks beneath that 0.6707 support level.

U.S. inflation figures are the highlight of the week ahead for GBP/NZD given that New Zealand’s economic calendar is devoid of major appointments and because Friday’s November GDP data from the UK mostly covers the period before the emergence of the Omicron variant.