The Pound-to-New Zealand Dollar rate enters the new week near its highest since late August and could remain buoyant above 1.95 over the coming days if local coronavirus developments or global market factors lead the Kiwi to remain a laggard among major currencies.

New Zealand’s Dollar lagged major counterparts in the final session of last week having outperformed only the safe-haven and low-yielding Japanese Yen while being left behind by oil-linked currencies like the Canadian Dollar, as well as a rejuvenated Pound Sterling.

This was even after the Reserve Bank of New Zealand (RBNZ) announced the first in a likely cycle of increases to its official cash rate on Wednesday, which rose from 0.25% to 0.5% and could yet rise further over the coming years.

“Guidance reiterated that the OCR could eventually reach 2.0%. But offshore markets appear to be pricing pandemic risks into the NZD, sceptical that the RBNZ can outpace the developed world in its tightening cycle,” says Imre Speizer, head of NZ strategy at Westpac.

The Kiwi’s lacklustre response may have been nothing more than the short-term influence of profit-taking following a widely expected decision, but it could also reflect unease in the market now that the coronavirus is appearing to have dug its heels in on the ground in New Zealand.

Price action and the latest updates from Wellington could offer answers this week and would determine along the way whether the Pound-to-New Zealand Dollar rally fades, or if it extends and takes Sterling up to 1.98 or more. 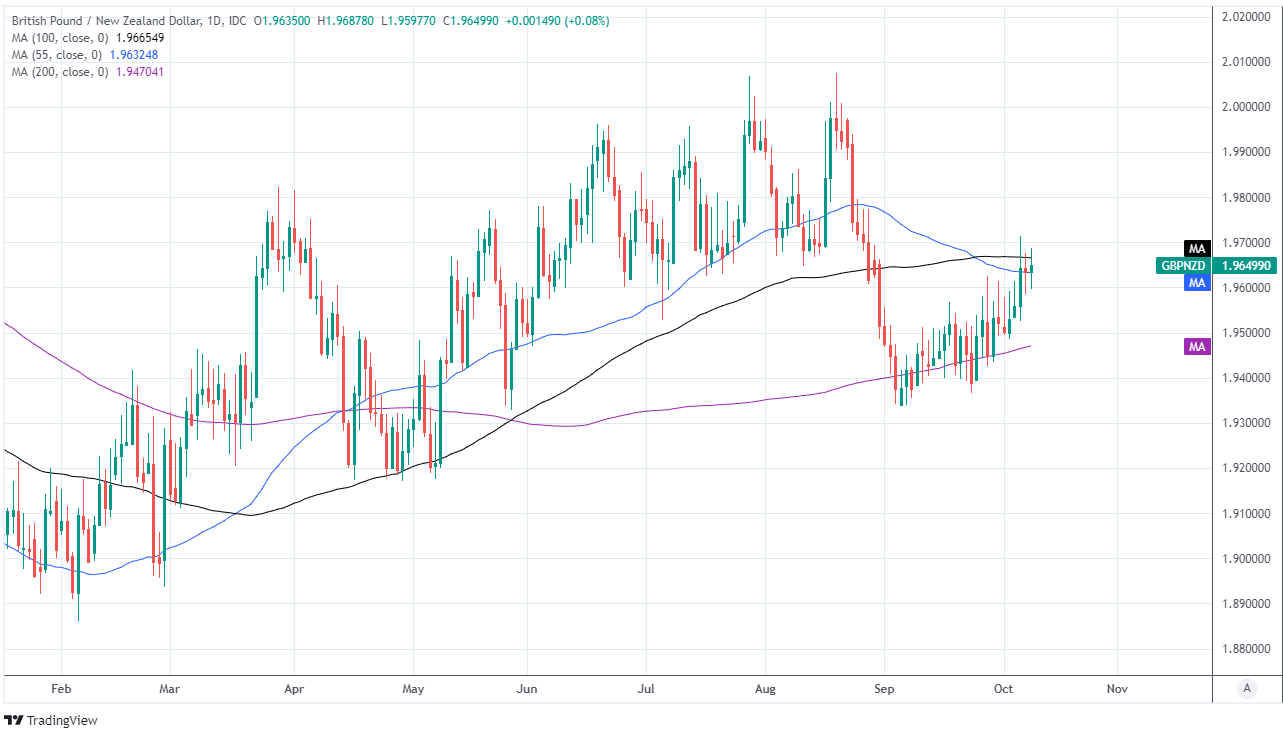 Last Wednesday’s RBNZ decision came just after the government announced there had been further instances of coronavirus infection in Waikato, the capital of the small regional economy Northland, after a small cluster was initially detected last Monday.

By Friday the government had placed all of Northland under Alert Level 3 restrictions, which are also in effect in New Zealand’s largest metropolitan centre Auckland, which may explain the market’s faltering appetite for the Kiwi Dollar ahead of the weekend.

“This raises the risk of more prolonged and more geographically widespread restrictions (this is already happening in the Waikato), which in turn is expected to weigh on the post lockdown bounce in economic activity,” says Mark Smith, a senior economist at ASB Bank in Auckland.

Alert Level 3 leaves all businesses open and makes only modest other demands of them and households so does not outright impede economic activity, although there is risk of additional measures coming in response to any further spread and it’s not yet clear what this would mean for RBNZ policy.

For its part, the bank said itself in August that future decisions would not be closely tied to whether restrictions are in effect because it views government fiscal policy as better placed to address the adverse effects of such measures.

The Pound-New Zealand Dollar rate will be sensitive as ever this week to the trajectory of the main Kiwi exchange rate NZD/USD as it responds to any local coronavirus developments and global market factors like the twists and turns of the U.S. Dollar because the main Kiwi pair is more susceptible to strength in the Dollar than GBP/USD.

GBP/NZD always closely reflects the relative performances of NZD/USD and GBP/USD, and would be likely to remain buoyant this week if either domestic or international factors keep NZD/USD on its back foot.

Meanwhile, the Pound-to-Kiwi rate would likely remain above 1.9560 in any circumstances where the Kiwi falters unless this week's speeches from BoE officials, UK economic data or other factors inspire weakness in Sterling.

The Pound-to-Kiwi rate could potentially rise to a little over 1.98 if Westpac’ is right about NZD/USD slipping to 0.6860 and if at the same time GBP/USD remains buoyant at or above the 1.36 that prevailed late last week. 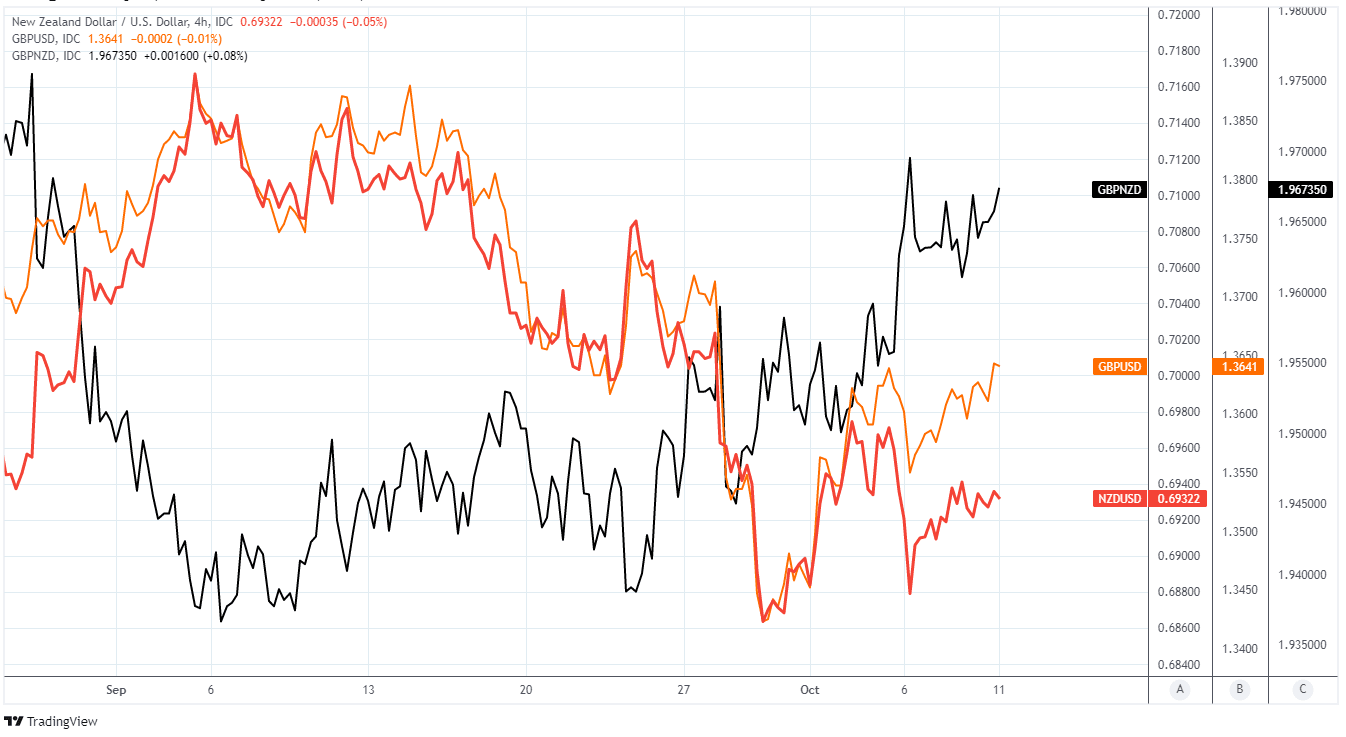 Above: NZD/USD shown at daily intervals with GBP/USD and GBP/NZD.

“NZD/GBP has held below 0.51 [GBP/NZD above 1.96] after the earlier slip and still looks very weak technically. Both central banks are either hiking or talking about it,” says David Croy, a strategist at ANZ, in a Friday note.

Both GBP/USD and GBP/NZD could remain buoyant in the week ahead if the elevation of inflation risks up the BoE and wider public's agenda continues to elicit steady market demand for Sterling now the Monetary Policy Committee's shifting interest rate stance has become all but impossible to overlook.

The steady drip feed of remarks coming from BoE officials over recent weeks as well as months, combined with the recent Office for National Statistics upgrade to estimates of UK GDP growth in the second quarter, have prompted the market to seriously entertain an early 2022 move by the BoE to begin reversing the Bank Rate cuts of 2020.

The Pound could be extra sensitive this week to the views expressed by the various BoE policymakers as they whichever way they cut, although it’s relevant that these three members are the closest thing the bank's rate setting committee still has to a ‘dovish camp.’

Along the way Wednesday’s GDP number for August will be of enhanced importance because it will provide clues about the likely time over which the economy could be expected to recoup the remainder of the GDP lost to coronavirus containment attempts in 2020.