The New Zealand Dollar has advanced in value against all the major currencies over the course of the past week, extending an outperformance that has led Westpac, Crédit Agricole CIB and others to tip the Kiwi as a buy in anticipation of a further rally ahead.

New Zealand’s Dollar has risen against all major developed and emerging market currencies including the Pound over the last week and was extending those gains on Tuesday even as Dollar exchange rates bounced off of their Monday lows.

Its recovery and outperformance is steadily drawing a line under late March losses that mounted after third-quarter 2020 GDP growth came in slower than was expected and when the New Zealand government sought to pull the rug from under a rising housing market.

The Kiwi has risen more than three percent against the Dollar in the last week while the greenback’s broader 2021 rebound has largely petered out in what has been a supportive development for commodity prices and currencies more generally.

Westpac flagged upside risks on Tuesday ahead of several attempts by NZD/USD at rising above 0.72, and is looking for NZD/USD to reach 0.76 by year-end.

That would be a bearish outcome for the Pound-to-New Zealand Dollar rate, potentially pulling it all the way down to 1.84 unless the main British exchange rate GBP/USD is able to rise substantially further in 2021 also. 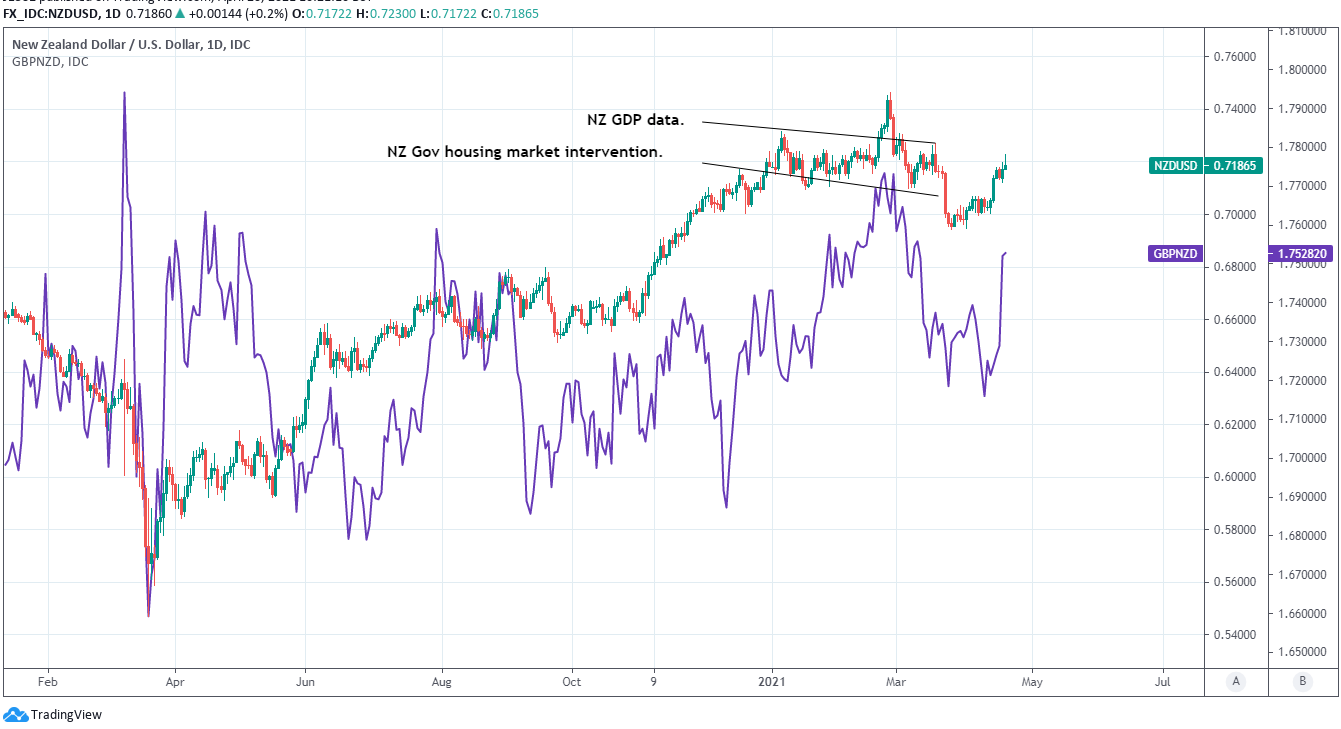 Above: NZD/USD shown at daily intervals with GBP/NZD (purple).

The Pound-to-New Zealand Dollar rate was turned away from 1.95 and traded as low as 1.91773 last week, a level that’s rarely been seen since before January and February’s barnstorming rally by Sterling, with losses reflecting both occasional weakness in Sterling as well as the Kiwi’s ongoing rally.

“WMP prices are at a multi‑year high and support the fundamental uptrend in NZD/USD,” says Elias Haddad, a strategist at Commonwealth Bank of Australia.

The New Zealand Dollar advanced on Tuesday in price action that may have been aided by a 0.4% increase in the price of whole milk powder (WMP), New Zealand’s largest export, at the latest Global Dairy Trade auction in the European afternoon.

It must yet navigate first quarter inflation data due out at 23:45 London time, which could impact investors’ views of the outlook for interest rates at the Reserve Bank of New Zealand (RBNZ) if it comes in lower than the 0.8% quarter-on-quarter rise expected by economists.

However, strategists at Crédit Agricole CIB cited the bank’s internal models for advocating this week that clients still bet on further gains for NZD/USD over the coming days.

“The NZD continues to trade in oversold territory, despite last week’s positive price action. This is mostly due to real money investors selling the currency on rallies. With positioning as it stands, and should global risk sentiment stay supported as for instance driven by more positives on the US earnings front, corrective NZD upside risk stays intact,” says Valentin Marinov, Credit Agricole’s head of FX strategy.

Credit Agricole was also a buyer of NZD/USD early last week, successfully capturing much of its three percent gain from the U.S. Dollar, and is now looking for a break above 0.72 toward the tail end of an April month in which New Zealand’s Dollar, Sterling and the Norwegian Krone are normally found to be outperformers. 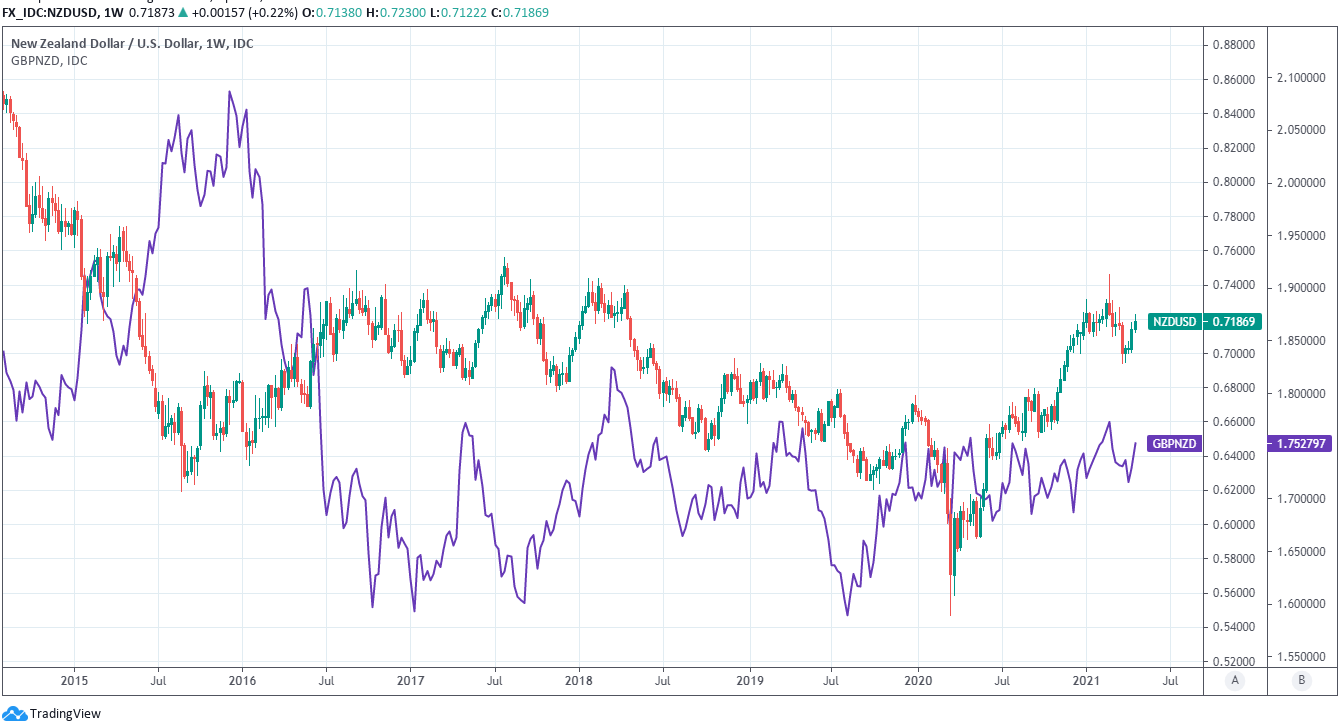 Above: NZD/USD shown at weekly intervals with GBP/NZD (purple).