New Zealand's Dollar may have bottomed out against the U.S. Dollar and other currencies early this April after being toppled last month by data revealing a slower-than-expected economy for the final quarter of 2020 and a subsequent New Zealand government intervention to stem increases in house prices.

The Kiwi rose against all majors on Thursday with the exception of the Japanese Yen and Swedish Krona, which were both also underperformers during March as well as in the prior month, and is likely to a advance further on at least the U.S. Dollar over the coming weeks according to strategists at TD Securities.

"Our seasonality model points to NZD upside over the first two weeks," says Mark McCormick, global head of FX strategy at TD Securities. "It's currently the cheapest major currency on high-frequency fair value (HFFV), trading at a near 4% discount. It's also seen one of the biggest shifts on our positioning indicator (PIT) over the past month." 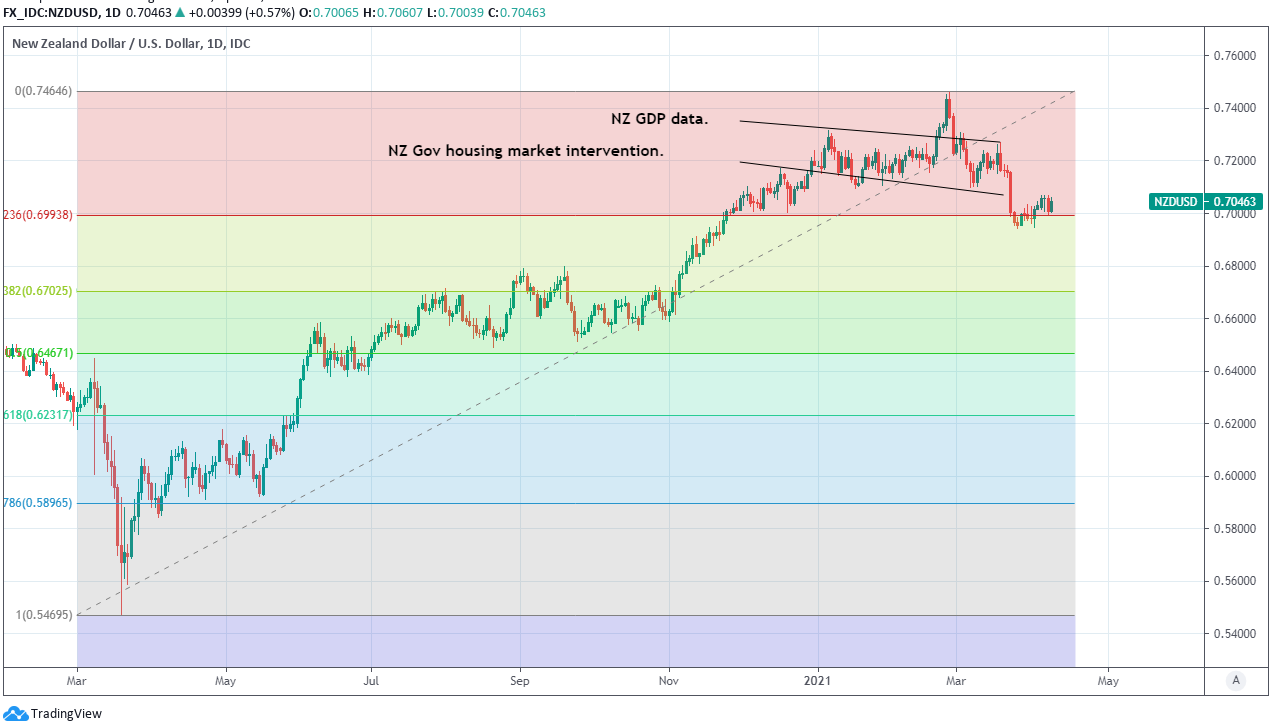 Above: NZD/USD rate shown at daily intervals with Fibonacci retracements of March 2020 trend. Click to enlarge.

TD Securities recommended this week that clients buy NZD/USD around 0.7018 and look for a move to 0.72 as their preferred trade for the period, though they also cited internal studies of seasonal trends for suggesting the Kiwi could actually enjoy a fortnight of gains in the first half of April.

NZD/USD fell by more than -7% between February 25 and March 25, with the lion's share of losses coming between when the final quarter GDP report was released on March 18 and just after the government announced its intervention in the housing market on March 23.

But the exchange rate was still down -4.67% from end of February levels on Thursday despite its tentative stabilisation over the course of April's opening week, which has left the New Zealand Dollar undervalued by as much as -4% on TD Securities' estimates of 'fair value'.

"NZD/USD is holding above 0.7000. New Zealand’s ANZ business confidence dipped in April but remains indicative of favourable economic growth prospects and rising price pressures," says Elias Haddad, a strategist at Commonwealth Bank of Australia. "Our ASB colleagues project the RBNZ to start lifting the OCR from August 2022 and no increases to the Large Scale Asset Purchase (LSAP) programme cap of NZ$100bn. The RBNZ has so far accumulated NZ$51.16bn." 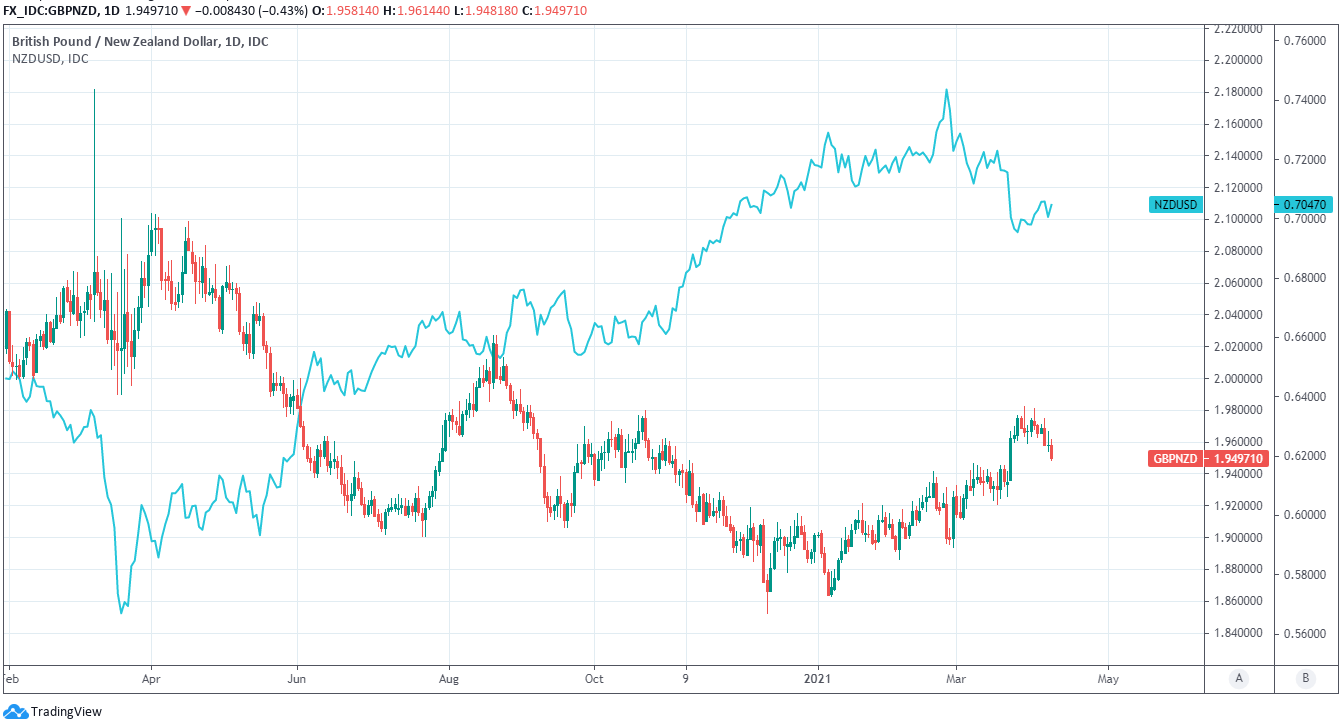 This saw investors piling into the Kiwi over the final quarter while maintaining a bid for the currency through early 2021 until February's upset.

But, and for reasons that are largely unknown, the Kiwi typically performs strongly in any given April, alongside the Pound, in what is referred to as "seasonality."

Seasonality and the sheer scale of the Kiwi Dollar's mainly-March losses could see NZD/USD and other exchange rates supported in the coming weeks but once beyond here there is a lot to be determined by the domestic economy, global economic picture and market's appetite for U.S. Dollars.

"The Dollar Index and US treasury yields are lower on the week despite the huge rise in US payrolls in March. This challenges expectations that Q2 will deliver renewed gains for the US dollar. But there is plenty of fiscal support still in the pipeline to keep the US economy humming," says Imre Speizer, head of NZ strategy at Westpac. "NZD/USD remains in consolidation mode around 0.7000, and below key resistance at 0.7100. We’re watching that level closely – a break above would see us flipping to a bullish stance near term. Until that happens, we remain cautious, mindful of a slowing in NZ economic momentum." 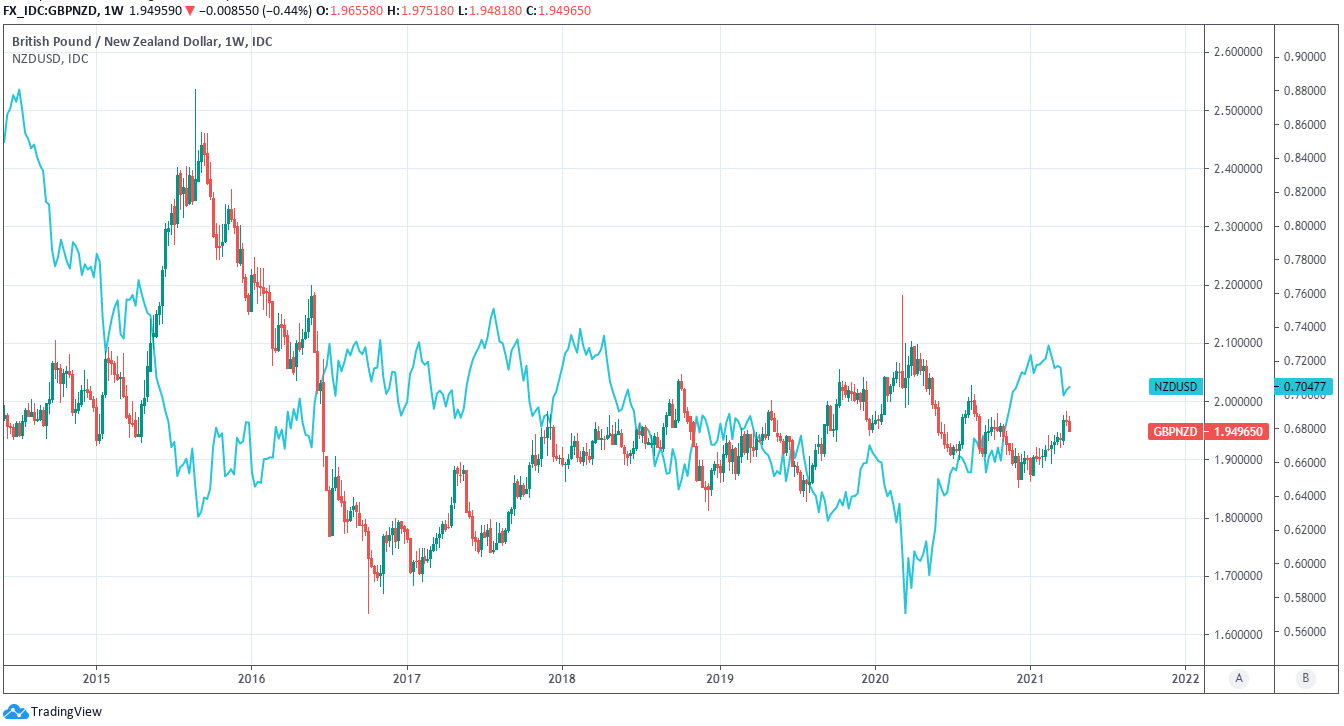 The New Zealand Dollar was the only major currency to successfully resist a further advance by the U.S. Dollar on Tuesday, demonstrating in the process why it’s tipped as a buy at HSBC, which sees the Kiwi being lifted up ahead by the Reserve Bank of New Zealand (RBNZ) policy outlook.

The Pound-to-New Zealand Dollar rate remained ascendant early in the new week and was close to printing one-year highs around 1.9950, which would yet be seen if either the U.S. Dollar rebounds further, or if Thursday’s Bank of England (BoE) decision provides Sterling with reason for cheer.