The New Zealand Dollar could underperform in the near-future we are told, as investors pare back expectations for an interest rate rise at the RBNZ at some point in coming months in the wake of last week's surprisingly poor economic data.

David Croy, Senior Strategist at ANZ says the "local vibe" has deteriorated somewhat given an unexpectedly sizeable decline in New Zealand economic activity towards the end of 2020.

Sentiment towards the New Zealand economy took a knock last week when Stats NZ reported GDP for the final quarter of 2020 fell by 1.0%, which was more severe than the market had been expecting.

"The unexpected fall in Q4 GDP suggests the NZ economy has not fared as well as previously believed through the COVID-19 pandemic," says Jane Turner, Senior Economist at ASB in Aukland. 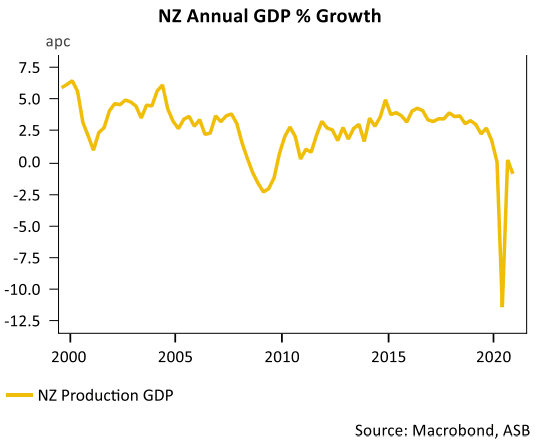 New Zealand has avoided the harsh and ongoing lockdowns that many of its developed market peers have experienced, and indeed continue to experience.

This meant the economy has been able to operate closer to its full capacity, which in turn confers an economic outperformance advantage on the New Zealand Dollar.

But, the GDP data suggests the economy might have suffered more than had been assumed.

The decline in economic activity means the the Reserve Bank of New Zealand (RBNZ) is likely to maintain a cautious approach when addressing future interest rate rises, wanting to ensure it provides maximum support to an economy that continues to underperform its full potential.

The RBNZ had been a source of support to the New Zealand Dollar over recent months as the market started to bet an interest rate rise was becoming increasingly likely at some point in 2022, putting the central bank ahead of its peers in the G10 space.

When a central bank indicates it intends to raise interest rates while others are sitting on their hands, the currency that central bank issues tends to benefit.

However, should those expectations reverse or suffer a setback, the currency would be expected to declines, and this appears to be relevant to the New Zealand Dollar at present.

7 out of 16 industries reportedly registered a decline in the quarter, with the two largest contributors to the drop being construction and retail trade and accommodation.

The data has prompted the market to reappraise a bullish stance on the New Zealand Dollar built on rising expectations for interest rates to be hiked at some point in 2021.

"This is likely to see more rate hike risk priced out in the near term, which will in turn anchor the short end, steepen the curve, and weigh on the NZD," he adds.

Any weakness in the New Zealand Dollar will be felt particularly acutely against currencies that have had a good 2021 to date, most notably the Pound and Dollar.

The Pound-to-New Zealand Dollar exchange rate (GBP/NZD) maintains a gentle yet steady uptrend, courtesy of a broad-based rise in Sterling in 2021 given a combination of faded Brexit anxieties and expectations for a rapid UK economic rebound as the country's vaccine drive opens the door to a sustainable opening of the country.

The GBP/NZD exchange rate is seen 1.9367 at the start of the new week.

The New Zealand Dollar-U.S. Dollar exchange rate (NZD/USD) is meanwhile edging towards the bottom of its 2021 range, with the pair quoted at 0.7157 at the start of the new week. (Here too the NZ Dollar is finding its opposite number to be relatively strong, as the U.S. Dollar has defied expectations and actually strengthened over recent weeks).

ASB says the deterioration in the New Zealand economy's performance in the fourth quarter raises significant questions regarding the outlook, which they expect should keep the RBNZ cautious.

The GDP data "will likely see a material reassessment of NZ’s underlying economic performance through the pandemic and will reinforce to the RBNZ and market participants that lifting the OCR from its current low levels is likely to be a long time coming," says Turner.

"The NZ economy is more vulnerable than previously thought," she adds.

ASB tell clients that the GDP outcome has likely reopened the door to the possibility of cutting the OCR to zero or into negative territory if the NZ economy hits additional speed bumps on its road to economic recovery over the rest of 2021.

Should such expectations start to build then the NZ Dollar could find itself trending lower in a repeat of market price action seen towards the mid-point of 2020.