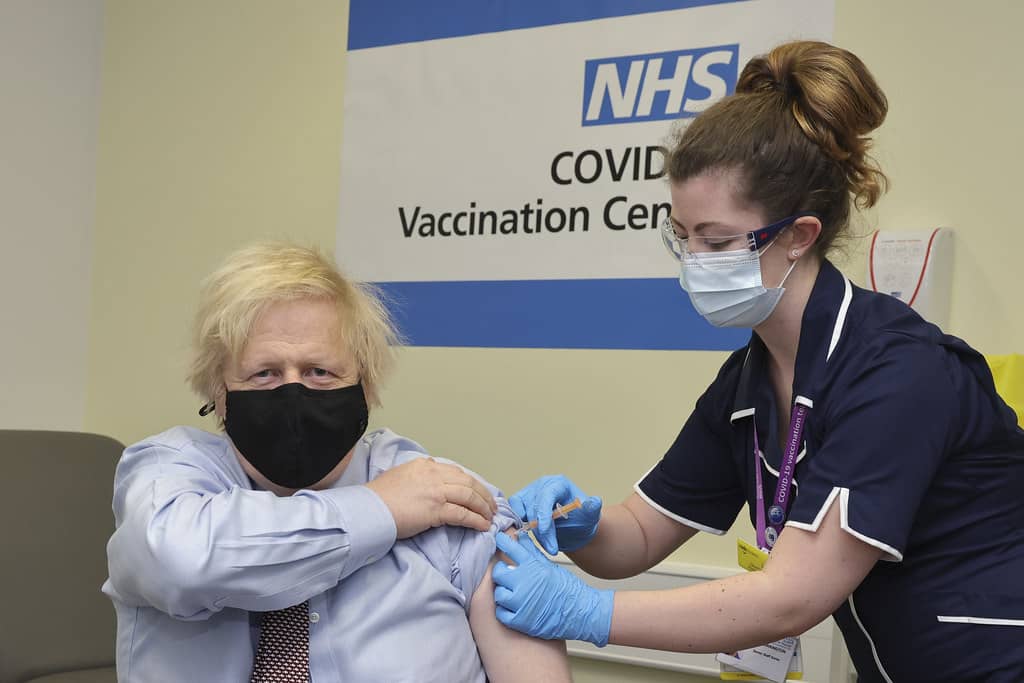 Above: The Prime Minister Boris Johnson is given the Oxford–AstraZeneca COVID-19 vaccine by nurse Lily Harrington at St Thomas' Hospital in central London. Picture by Andrew Parsons / No 10 Downing Street.

Pound Sterling is forecast to gain against the Euro and Dollar over coming months, but a near-term pause in the currency's rally must be expected say analysts we follow.

"The UK is vaccinating at a much faster pace than the rest of Europe, which, combined with the Brexit deal, means the UK is set to outperform the rest of Europe beyond Q1 21," says Mikael Milhøj, Senior Analyst at Danske Bank.

GBP/EUR briefly rose to a new one-year best last week when it hit 1.1718 before paring those gains back to 1.1650, where we find it at the start of the new week. 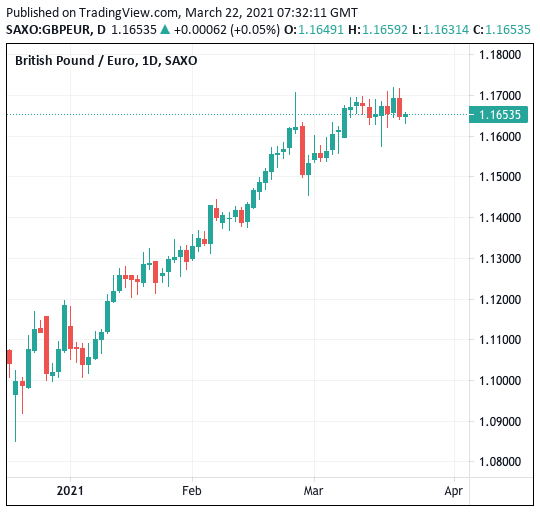 Above: Despite a strong start to 2021, the Pound's rally has hit the buffers in March.

Advances in Sterling during 2021 come as investors look forward to the country exiting the covid-19 pandemic on a sustainable footing in light of the country's rapid vaccine drive.

The past weekend saw new records for vaccinations set, with the UK now having administered 29,859,742 doses, with 27,630,970 people having now received their first dose.

By contrast, Eurozone countries continue to struggle in their efforts to distribute the vaccine owing to issues with supply and a growing hesitancy amongst Europeans to take the AstraZeneca/Oxford University drug.

"Covid cases are rising in Germany and France resulting in stricter or extended containment measures, while the vaccine deployment has been much slower than in the UK and the US," says Nikesh Sawjani, an economist with Lloyds Bank. 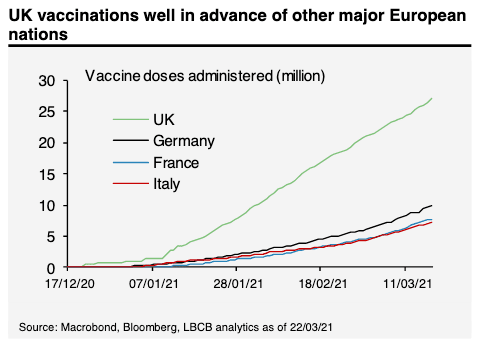 Also helping Pound Sterling advance over recent weeks has been the relief afforded by the EU-UK trade deal, secured in December.

"We expect the Brexit deal will eventually reduce the uncertainty which has been weighing on especially UK businesses over many years now after the near-term adjustment to the new relationship is over," says Milhøj.

"We believe Brexit has moved into the background now," he adds.

Peter Chia, Senior FX Strategist at UOB, says in a monthly foreign exchange update to clients that the British Pound remains undervalued, "having been battered by Brexit in the last couple of years, but is now underpinned by flows into the currency as the downside risks posed by the pandemic to UK’s economic recovery later this year have reduced".

As such, Chia remains positive on the Pound on a valuation basis, just as the tail risks of Brexit, negative UK policy rates and COVID-19 have more or less fully dissipated.

While the Pound has advanced against the majority of its peers in 2021, analysts are cautioning that the currency might struggle to maintain a strong pace of appreciation and consolidation might be in store for coming days and weeks.

"The BoE maintained its cautious economic and policy outlook at its March meeting and thus largely ignored the recent improvement in the UK data and the successful Covid vaccine rollout. This disappointed the GBP bulls and further highlighted that many positives seem to be in the price of the currency by now," says David Forrester, FX Strategist at Crédit Agricole.

"It may take a breather near-term," says Milhøj.

The Pound has been stuck in a sideways-orientated range for much of March, while a stronger Dollar has meant that GBP/USD has edged back below 1.40 and faces near-term pressure.

Danske Bank forecast the GBP/EUR exchange rate to maintain a range of 1.15-1.14 in the near term.

However, it should move higher "when it gets more clear that the UK will exit the pandemic as one of the first countries, benefitting from its first dose first strategy," says Milhøj.

"We still believe GBP will strengthen this year," he adds.

The near-term behaviour of Pound Sterling could well depend on where the data goes and whether the country is indeed benefiting economically from its vaccine rollout.

Coming days will be important in this regard given a sizeable docket of data releases due out of the UK.

"Investors will look for more evidence that the UK economy is re-emerging from its Covid-induced slump at the start of the year. That said, we further think that UK inflation data could also start showing the negative impact from the latest sharp GBP appreciation," he adds.