The Bank of England appears to have disappointed those wanting a stronger British Pound by signalling it would not raise interest rates until inflation in the UK has risen significantly.

A major driving force of Sterling exchange rate gains in 2021 has been the Bank's gradual move away from potentially introducing negative interest rates in the UK, but with this development in the rear-view mirror markets would likely want to see hints that the Bank is considering raising interest rates at some point in the near future.

Raising rates is however clearly not on the Bank's radar, which will have tempered some enthusiasm for Sterling, although the policy event is by no means a knock-out blow to the currency's recent trend of appreciation.

"Sterling declined after the Bank of England left policy unchanged while the tenor of its statement sounded a dovish note on the outlook for Britain’s weakening job market," says Joe Manimbo, a foreign exchange analyst with Western Union Business Solutions. 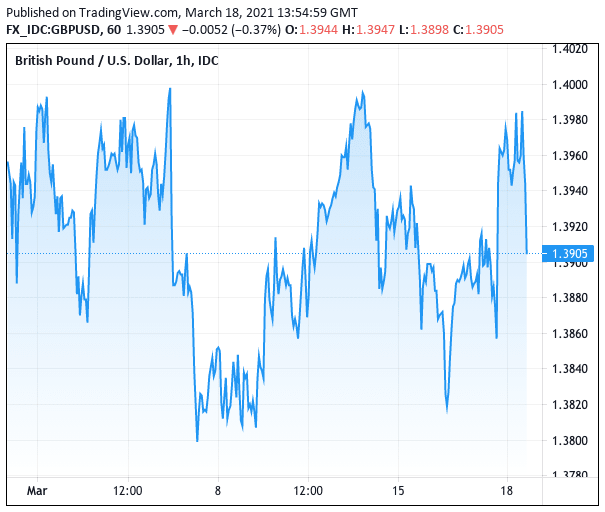 Above: GBP/USD trade in March.

"The Committee does not intend to tighten monetary policy at least until there is clear evidence that significant progress has been made in eliminating spare capacity and achieving the 2.0% inflation target," the Bank said in a statement.

Spare capacity refers to the ability of an economy to add more jobs without risking pushing up inflation.

With employment falling during the pandemic the Bank therefore expects it will take some time before employment recovers to the extent that rising wages starts putting upward pressure on inflation.

It also suggests that the Bank will be happy to sit on its hands and observe inflation rise above 2.0% in the near future if employment is still recovering towards pre-pandemic levels.

"While developments have been positive since the February meeting, the Bank of England decided to marginally push back against market expectations of an earlier normalisation by maintaining the current pace of quantitative easing (£4.4bn weekly) and requiring visible progress in inflation data towards the target," says Simon Harvey, Senior FX Market Analyst at Monex Europe.

The Pound-to-Euro exchange rate had hit its highest levels in over a year leading up to the release of the Bank of England's decision and guidance on interest rates and the economy. The fall in Pound Sterling is a clear reflection that investors were wanting a more 'hawkish' outcome: 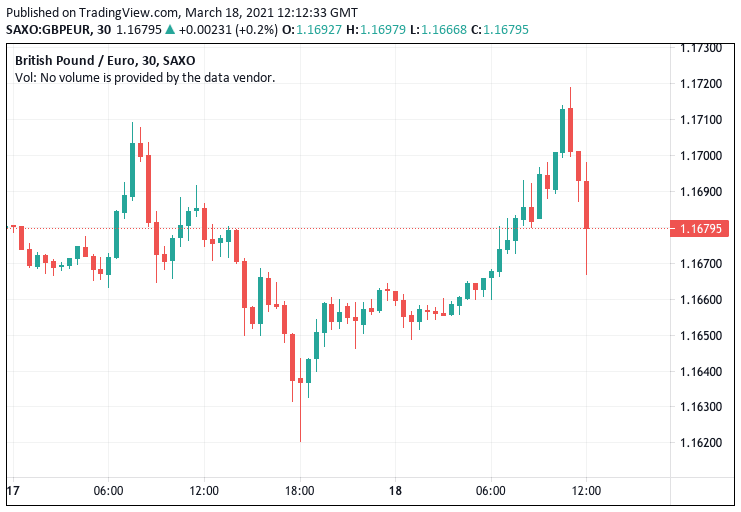 Above: GBP/EUR over the past day showing the retreat from highs in the wake of the BoE decision

The Pound-to-Dollar exchange rate had risen to 1.40 earlier in the day, but a subsequent retracement sees the pair quoted back at 1.3946 at the time of writing.

"Sterling exhibited the slight unwind of hawkish expectations after the headlines came in as it fell 0.17% against the dollar to touch fresh daily lows," says Harvey.

The Bank noted that the March Budget would result in a medium-term fiscal tightening that would slow the recovery from April 2022 onwards, which should encourage some caution regarding the outlook.

The Bank maintain they continue to see little chance that the period of modestly above-target CPI inflation at the end of this year, due to the rebound in energy prices, will become ingrained.

The issue of rising yields paid on government bonds across developed markets - including in the UK - was an area the Bank could have also touched in its communications.

The Federal Reserve and European Central Bank have both over the course of the past week pushed back against these rising yields, in order to prevent unnecessary monetary tightening.

However, the Bank of England opted to swerve addressing the issue, which in itself could be gauged to be a positive for Sterling, given the observation that rising gilt yields (yields on UK bonds) is typically held to be supportive of the currency.

"The MPC chose not to push back against the recent rise in rate expectations and gilt yields. This was never likely, given that the first rate hike isn’t fully priced-in by markets until Q1 2023; the Committee can’t make credible commitments that extend so far into the future," says Samuel Tombs, Chief U.K. Economist at Pantheon Macroeconomics.

Tombs adds it is unlikely the Bank will raise interest rates as soon and as quickly as markets currently expect, a view that if correct will disappoint those wanting further gains in the Pound.