The New Zealand Dollar continues its almost relentless advance against the Pound, with the GBP/NZD exchange rate declining in a favourable market for risk assets, of which the Kiwi is a favourite.

But, the New Zealand currency could soon run into valuation headwinds, according to some analysts, which would slow its rally and may provide Sterling with respite from recently relentless pressure.

New Zealand's Dollar has outperformed of late, eclipsed only by the oil and equity-linked Norwegian Krone and the well correlated Swedish Krona, as the outperforming currency and economy prove popular with investors who've remained optimistic that a vaccine will soon consign the coronavirus to the pages of history.

This saw the main Kiwi exchange rate NZD/USD edge tentatively above a major technical resistance level at 0.7017 on Friday, marking its highest since June 2018 in the process, although after a 6.6% climb in the 20 trading days to Friday some strategists see the Kiwi rally at risk of slowing due to possible valuation headwinds.

"NZD/USD is powering forward above 0.7000," says Elias Haddad, a strategist at Commonwealth Bank of Australia. "Mixed valuation may be a medium-term headwind for NZD/USD. NZD/USD is overvalued relative to the level implied by real NZ-US two-year swap rate differentials. Meanwhile, NZD/USD is undervalued compared to NZ/US terms of trade trend and around equilibrium relative to whole milk powder price." 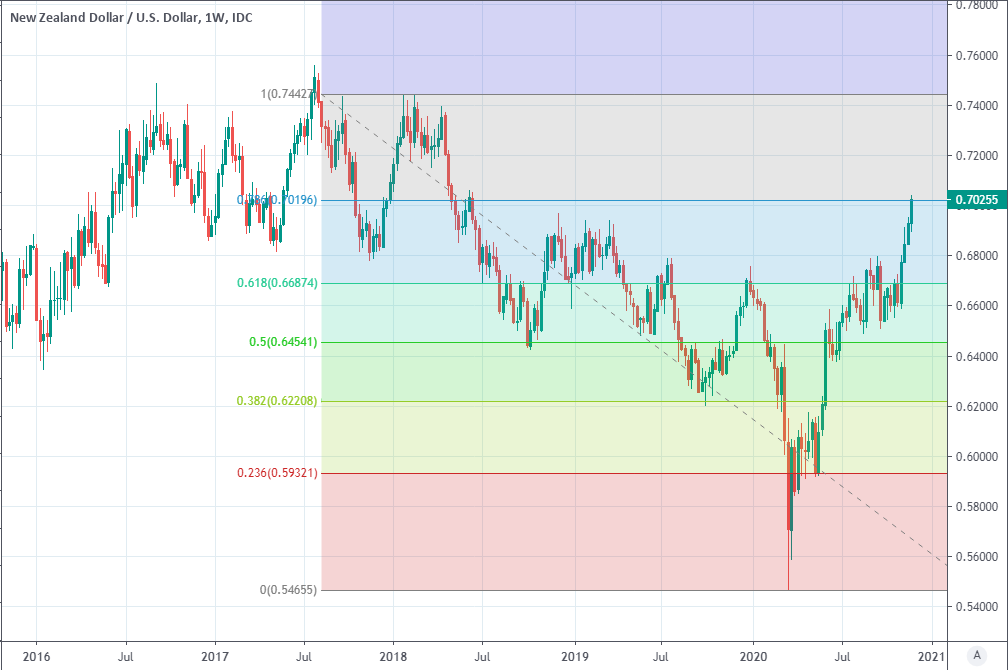 The New Zealand Dollar rally has gained momentum in November, aided by gains for commodity prices as well as the Chinese Yuan in the wake of the U.S. election, but also deriving a substantial boost from an apparently superior economic performance that has followed a best in class containment of the coronavirus. Containment and a resulting economic boost the Reserve Bank of New Zealand's (RBNZ) about-turn on negative interest rates as well as house price surge that has rattled the government.

"Retail sales experienced their highest growth on record in the September quarter, presenting upside risk to the Treasury’s PREFU forecast of GDP growth. Card spending has shown a steady recovery in November after some volatility, and the number of people receiving income support continues to fall. Annual GDP in the year to March 2020 was revised up by nearly $8 billion, and the annual goods trade surplus reached a 28-year high in October," the treasury said as part of its weekly economic update.

New Zealand's economic strength was on full display again last week when retail sales surged by 28% quarter-on-quarter, almost completely reversing the lockdown driven decline while posing upside risks to already upbeat economic forecasts announced by Treasury just ahead of the election. But by some accounts at least, this superior performance and improved outlook may now already be in the price of the New Zealand Dollar, which might see the Kiwi struggle to extend much beyond current levels.

"A stronger outlook and a higher-than-otherwise OCR outlook means the whole term structure of interest rates needs to adjust higher, and along with it, the NZD," says David Croy, a strategist at ANZ. "The recent positive vibe now appears to be “in the price” – markets have repriced OCR expectations significantly. However, it may take time to get clarity on developments, which could leave the market in wait-and-see mode for a while."

New Zealand's economy and Dollar have performed strongly but are not completely out of the woods, not least of all because so many other major economies - many also sources of export demand - remain encumbered by coronavirus-related restrictions.

In addition, New Zealand's borders remain closed to tourists for virus-related reasons until at least the latter part of 2021 so are depriving the economy of an industry that normally contributes more than five percent of GDP.

"We still favour OCR cuts at some point," says Dominick Stephens, chief NZ economist at Westpac. "The non-tourism part of the economy may be doing well, but we are still not completely convinced that medium-term inflation is on track. To make matters worse, the recent rise in the exchange rate and wholesale interest rates amounts to a de facto tightening of monetary policy that will constrain the economy and inflation. And finally, the RBNZ’s Large Scale Asset Purchase Programme (LSAP) is going to run out of fuel and will have to be replaced with another form of monetary easing."

With New Zealand's exchange rates higher and financial markets having priced-out any further meaningful easing of policy from the RBNZ, the bank could soon feel obliged to again begin leaning against the currency. Lingering RBNZ risk combined with valuation factors could see the Kiwi rally slow over the coming days, affording Pound Sterling an opportunity to catch up. 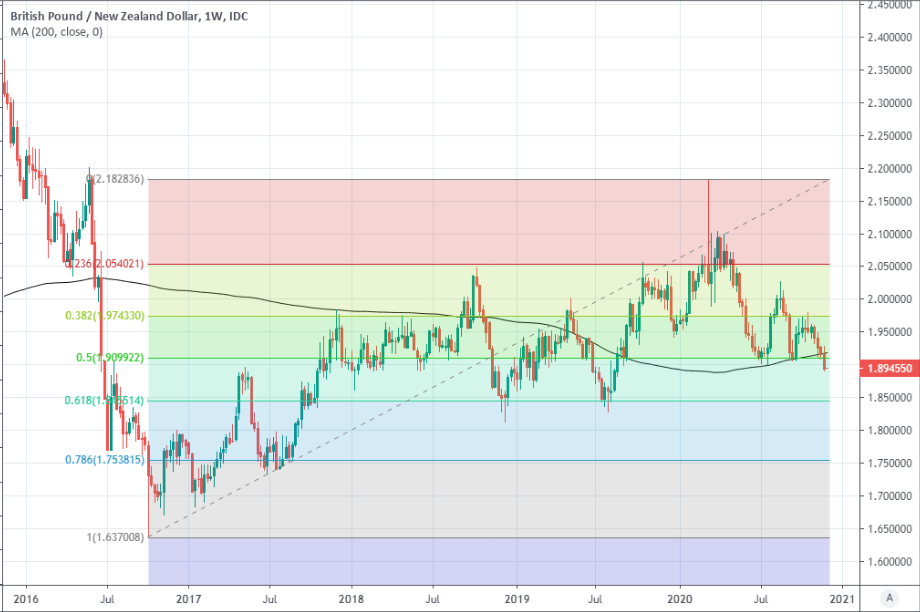 The Pound-to-New Zealand Dollar rate fell below 1.9004 on Friday as the NZD/GBP pair referenced by ANZ's Croy crossed above 0.5260 in a major technical development that could could now see Sterling pushed as low as 1.8587, the GBP/NZD equivalent of a 0.5380 NZD/GBP rate.

But the New Zealand Dollars latest gains have come amid a bout of weakness for Sterling and as the UK and European Union edge toward an agreement on future trade terms, which strategists at CBA said last week could lift the main Pound exchange rate GBP/USD up to 1.36.

Such a rebound would lift the Pound-to-New Zealand Dollar rate back to 1.9428 in a market where NZD/USD is trading around 0.70, and higher on any overshoot of 1.36 by GBP/USD.

"While recent progress has reflected well on Sterling, traders have become wary of making too much commitment until something concrete is announced. We expect significant moves for Sterling remain most probable in mid to late December," says Joe Tuckey, an analyst at Argentex.