New Zealand's economy saw employment fall by -0.4% in the second quarter when economists were looking for a -2% decline, while the unemployment rate fell from 4.2% to 4% in the face of a market that was looking for a rise to 5.6% as the national 'lockdown' worked its way into the data.

"NZD/USD jumped 20pips to above 0.6640 after the New Zealand’s unemployment rate unexpectedly fell in Q2 20," says Kim Mundy, a strategist at Commonwealth Bank of Australia. "The outlook for NZ’s labour market is anything but clear.  Roughly 17% of the labour force is still receiving the government wage subsidy which will expire at the end of August.  Our ASB colleagues still expect the NZ unemployment rate to rise from here."

Statistics New Zealand said that 35,700 people were out of work last quarter for virus-related reasons, which lifted the total number of unemployed Kiwis to 128.5k, although they weren't included in the official estimates due to technicalities of the official definition for unemployment. But had those people been included, the unemployment rate would have risen to 4.6%.

That's higher than Stats NZ's official estimate, but also a lot lower than the consensus among economists had looked for. Nonetheless, the New Zealand Dollar drew no benefit from the numbers on Wednesday as the Kiwi currency was quoted lower against all major currencies other than an unravelling U.S. Dollar and Japanese Yen heading into the European close. NZD/USD and NZD/JPY were higher for the session.

"I wouldn’t go chasing this move higher and while there may be more topside to come on the back of a weaker USD, the view of being short into next week’s RBNZ meeting on the premise that they announce unconventional easing measures still holds. I would also suggest that the higher the currency, the more concerned the RBNZ will be," says a member of the J.P. Morgan fx trading team in London, in a morning commentary. "Yields ground lower (US10Y just shy of 0.50) and gold made new highs. Again, these moves in my mind are representative of structural USD weakness and not just a capricious, exaggerated mid-summer move. We remain bullish on the euro." 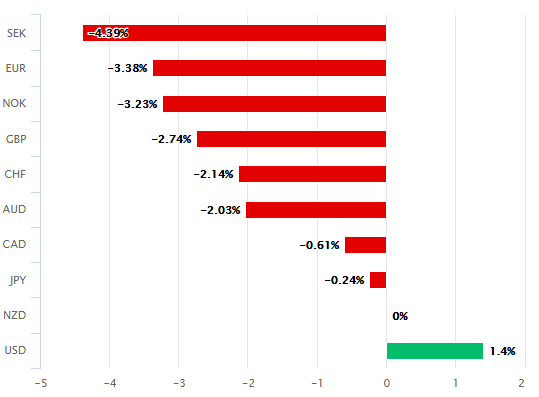 New Zealand's Dollar was among the first out of the blocks in a global riposte against the Dollar early last quarter, leading NZD/USD to advance more than 20% from its trough on March 19 to its peak above 0.67 on July 31. But as large as that performance has been, it hasn't been enough to prevent a depreciaton against every other major currency in the last month which is increasingly turning into a story that could characterise the 2020 year as a whole.

The Kiwi has lost ground against many large developed world rivals since stalling near 0.65 in June, a month that saw the Euro and other major European currencies catch up with the earlier outperforming antipodeans in response to EU leaders' joint funding of a coronavirus recovery programme. But even as European and other commodity currencies advanced to new highs in July, the Kiwi lagged in the ongoing race against the Dollar.

"NZD has settled into a new “comfort zone” just north of 0.66. While it remains elevated, it is struggling on crosses – even against the AUD after the resumption of QE there and the Victorian virus flare up. We expect the RBNZ to be very dovish next week and to keep harder hitting unconventional policy options including negative rates and foreign asset purchases on the table, all of which speaks to strong headwinds for the NZD," says David Croy, a strategist at ANZ. "The NZD’s key day reversal on Friday was ominous and points to a move lower but some catalyst is needed to speed things up as the USD recovery falters." 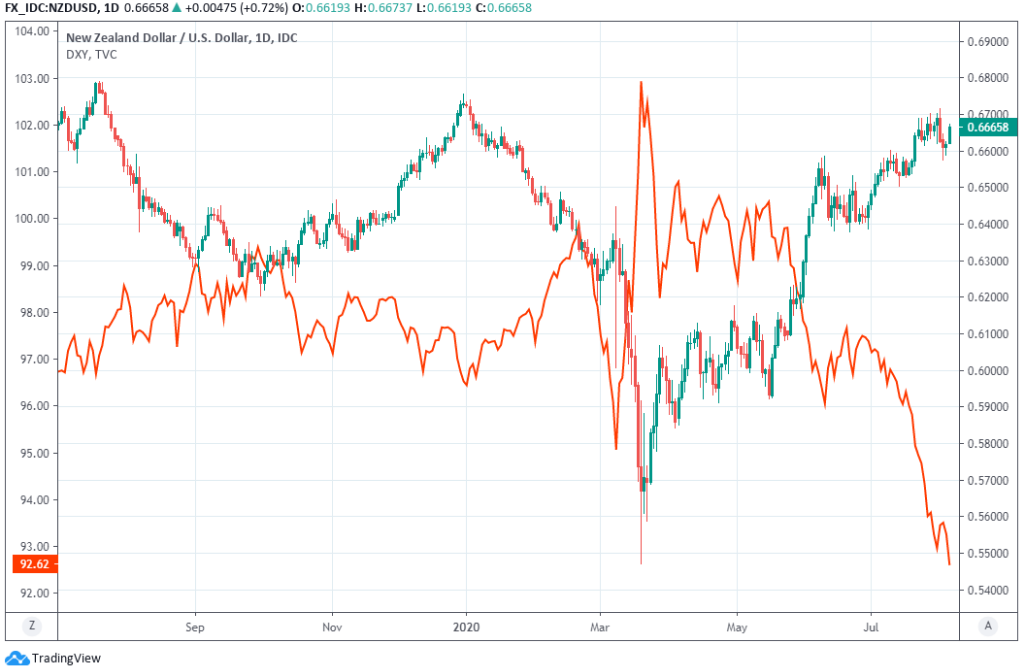 The Reserve Bank of New Zealand is firmly in the frame for the lagging performance of NZD/USD and Kiwi depreciation against other major currencies because it's caution about what the bank might do or say next that's stopped analysts and investors from getting enthusiastic about backing the local currency, even as risk appetite endures and the U.S. Dollar falls apart.

RBNZ policymakers have launched a major, maiden quantitative easing programme this year to support the economy through reduced borrowing costs but they've also floated and kept on the table the possibility of resorting to unconventional tools like negative interest rates and foreign asset purchases that would see the bank dumping Kiwi Dollars on the market in exchange for assets denominated in other currencies. Both would be bad news for the Kiwi.

"NZD saw the biggest drop (-9.2% of open interest) in its net positioning gauge since the market turmoil in early March. This has erased all the net-long advantage gained by NZD in recent weeks, sending it back to neutral territory," says Francesco Pesole, a strategist at ING.

The RBNZ is fearful that currency strength will undermine export competitiveness, the economy and push its inflation target further beyond reach, hence its frequent use of rhetoric to deter investors and traders. 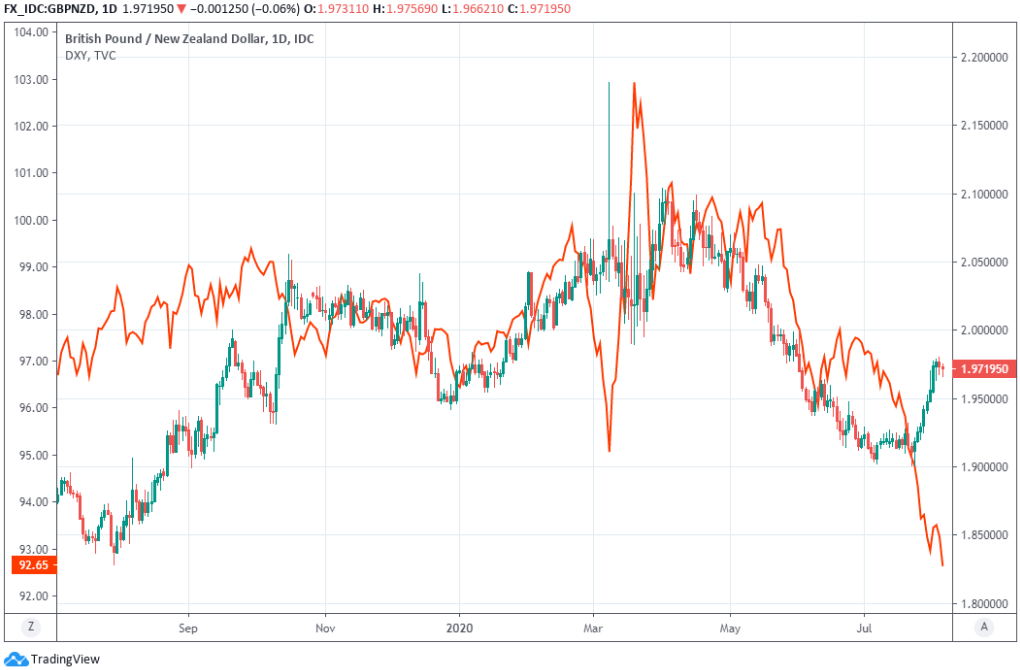 But the stalling NZD/USD and depreciation against other currencies have driven a capitulation of earlier bullish wagers on the Kiwi while also eating away at the foundations of the RBNZ's concerns, leaving the currency appearing as if it's been chained to the earth.

Legend has it that a Norse god once chained a beast to the earth, fearing what it might do in the future and sparing mere mortals a struggle in the process, but the story also goes that the beast managed to bite off somebody's hand along the way. In the same vein, the capitulation of bullish wagers on the Kiwi reflects not only a currency chained to the earth but also a hole the RBNZ has dug for itself, given the market might only be willing to hang on mere words for so long.

Eventually, the RBNZ could find itself confronted by a renewed rise in the Kiwi if it doesn't actually resort to voodoo forms of monetary policy.

Many analysts are looking for the RBNZ to increase the size of its government bond buying (QE) programme next Wednesday, from NZ$60bn to NZ$90 bn, although quantitative easing has become normalised in the last decade so it's not clear what impact this will have on the currency.

"Preliminary modelling finds tentative evidence that RBNZ LSAPs have had a more significant impact on NZGB yields than has NZGB issuance," says Imre Speizer, head of NZ strategy at Westpac. "One implication is that increases in issuance don’t need to be matched in volume by LSAPs in order to keep yields steady. It also follows that, as the need for fiscal stimulus eventually wanes, markets will be more sensitive to the eventual LSAP tapering than to the resultant slowdown in issuance."