- GBP back at bottom of major FX bucket, aiding breakdown in GBP/NZD.
- Has slipped into 1.9285-to-1.9756 range but grasps for support at 1.9600.
- NZD is threatened by CNH but GBP/NZD & USD/CNH correlation slipping.
- China problem, Brexit, central banks, NZ virus outperformance all at play.

Sterling was lower against all major rivals ahead of the weekend in a market dominated by "month-end flows" that helped paint a mixed picture in the major currency sphere. New Zealand's Dollar was down against all other than Sterling, it's U.S. rival and Canada's Loonie, with price action coming ahead of an eagerly-awaited press conference from President Donald Trump where details of a pending response to China's actions in Hong Kong are expected.

Meanwhile, the U.S. Dollar was down against all major rivals other than Sterling, in what some have previously described as a "buy the rumour and sell the fact" response to the an absence of action from President Donald Trump on Hong Kong after he and his administration threatened sanctions against China and its officials this week after the world's second largest economy began to tear up the  one-country-two-systems settlement on Asian financial centre.

But crucially for the Pound-to-New Zealand Dollar rate, Sterling was ceding ground to its U.S. rival at the same time as the Kiwi held its own. But NZD/USD was nearing resistance on the charts Friday and GBP/NZD a notable threshold of support that could see the latter attempt to stabilise in the coming days so long as the British currency is able to avoid being pummelled by adverse Brexit headlines or Bank of England (BoE) rhetoric for a few days more. 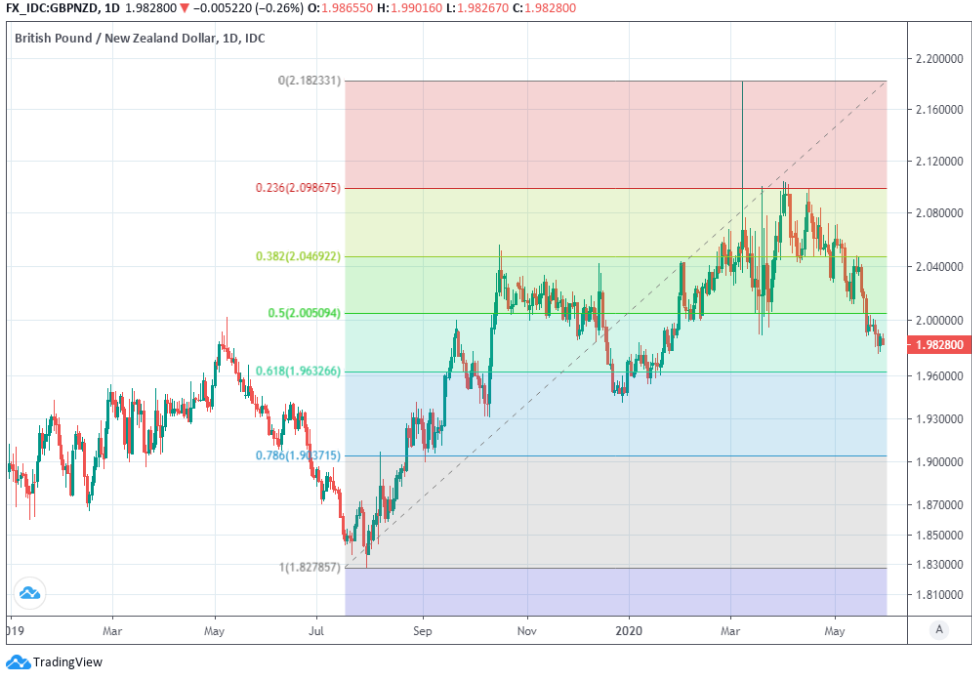 "End of month rebalancing by portfolio managers contributed to US selling.  However, USD could temporarily erase some losses because of US President Donald Trump’s address today. President Trump said “we are not happy with China” and stated that he will be announcing the US’ next steps after China passed the Hong Kong national security law. There is no specified time for his address.  But with market participants, on balance, more focussed on a US and global recovery, we expect any USD strength will be short‑lived," says Kim Mundy, a strategist at Commonwealth Bank of Australia.

Relative price action in NZD/USD and GBP/USD is what drives the GBP/NZD exchange rate so the market's appetite for Kiwi Dollars and the general mood among investors, which is important for the U.S. Dollar, are important influences on the outlook. New Zealand's Dollar has been one of the better performers in the major currency space this month while the greenback sits in the middle of the rankings and Pound Sterling firmly at the bottom.

The Kiwi could remain an outperformer too given NZ was first to contain the coronavirus, has a healthier financial position than many others and has so far chosen not to embroil itself in the diplomatic and economic conflict brewing over Hong Kong and the pneumonia-inducing disease. Finance Minister Grant Robertson told a press conference Friday the Kiwi economy is "opening up" and that "output is improving" though he did also temper optimism by reminding his audience that "no country is immune" to the global recession. 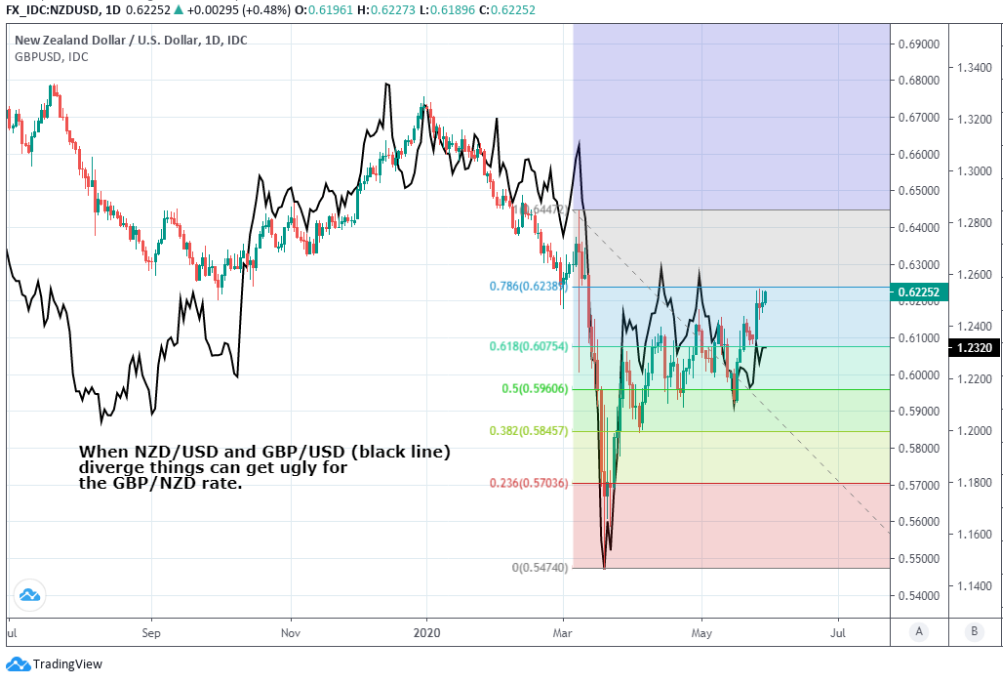 Above: NZD/USD tests 78.6% Fibonacci retracement as GBP/USD struggles to keep up with the Kiwi.

"NZD/USD has potential to break above 0.6235, supported by improving global sentiment," says Imre Speizer, head of NZ strategy at Westpac in research note Thursday, before turning to the one-to-three month outlook. "[It] remains at the mercy of global risk sentiment near term, with potential for gains to 0.6400 during the next few weeks. Further out, though, economic data releases over the next few months will be dire, potentially denting sentiment further. There’s potential to revisit 0.5900 during the next few months."

Meanwhile, both the U.S. and UK currencies were already less attractive to investors to begin with and are now volunteering themselves as targets for the Chinese aggression meted out to Australia in recent weeks. This could see both under additional pressure and amid many domestic headwinds.

NZD/USD was testing the 78.6% Fibonacci retracement of the March-to-April downtrend at 0.6235 Friday in a market where GBP/USD was on the back foot, explaining the fall in the Pound-to-New Zealand Dollar rate. A break above that level that is not matched by gains in GBP/USD would lead to further declines in GBP/NZD, which was approaching the 61.8% Fibonacci retracement of the July 2019 recovery trend at 1.9632 on Friday.

That 1.9632 level is an area of natural support for Sterling although NZD/USD restraint and GBP/USD stability would be necessary as a minimum in order for it to hold for any more than a fleeting moment. However, beyond the very short-term the Pound-to-Kiwi rate is at risk of slipping lower into a 1.9285-to-1.9756 range if NZD/USD remains on its front foot and the bearish analyst expectations for GBP/USD are borne out in price action. 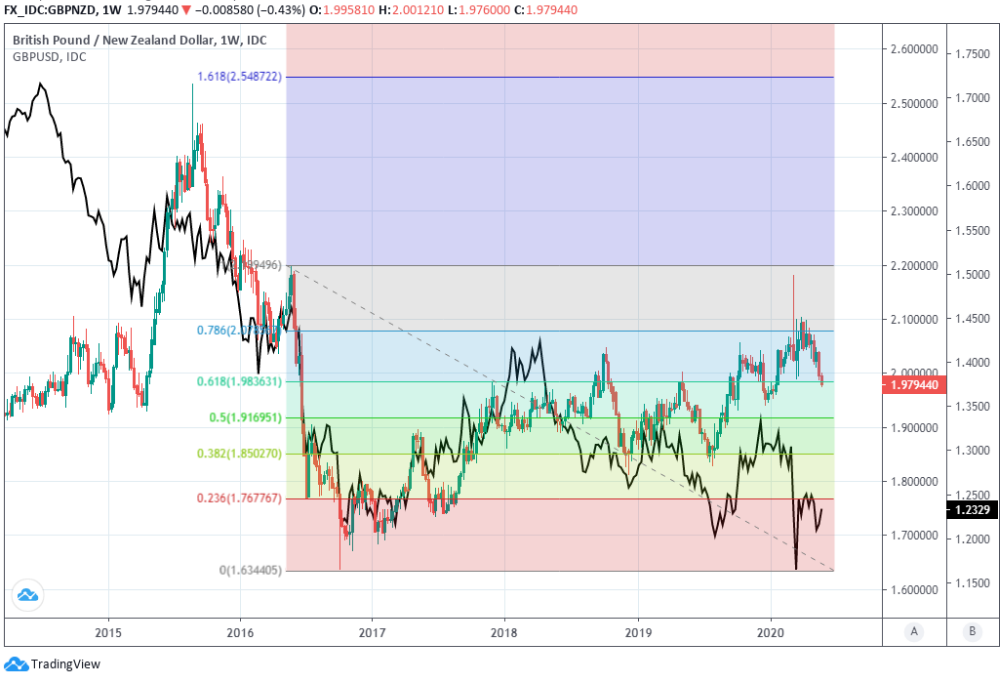 Above: GBP/NZD at weekly intervals with Fibonacci retracements of 2016 fall and GBP/USD rate (black line).

"The possibility of no UK‑EU trade deal is high. Very little progress has so far been made with recent rounds of Brexit talks. Disagreement remains on regulatory alignment and access by UK financial services firms to the EU. One last round of talks is scheduled for the week of 1 June 2020. Moreover, the type of trading relationship the UK seeks with the EU is not significantly different to World Trade Organisation (WTO) trading arrangements," says Elias Haddad, a CBA colleague of Mundy's.

However, the positive correlation between USD/CNH and GBP/NZD has weakened since the coronavirus came flying like a bat out of Wuhan.

The U.S. was joined Thursday by Australia, Canada and the UK who collectively issued a joint statement condemning the final blow delivered to the so-called Sino-British declaration during that session. The UK government is mulling a move to grant Hong Kongers a right of abode and pathway to citizenship after China's legislative machine passed a controversial security bill that inserts its authoritarian and oppressive apparatus directly into the city.

A coalition is in the process of coming together over Hong Kong and one that could easily turn its attention toward China's increasingly aggressive bid to dodge scrutiny and accountability over the origins and initial handling of the coronavirus, which has seen Australia subjected repeated acts of economic gangsterism in an apparrent retaliation for Prime Minister Scott Morrison's calls for an inquiry into where the virus came from and how it got out of China and did so much damage across the globe. 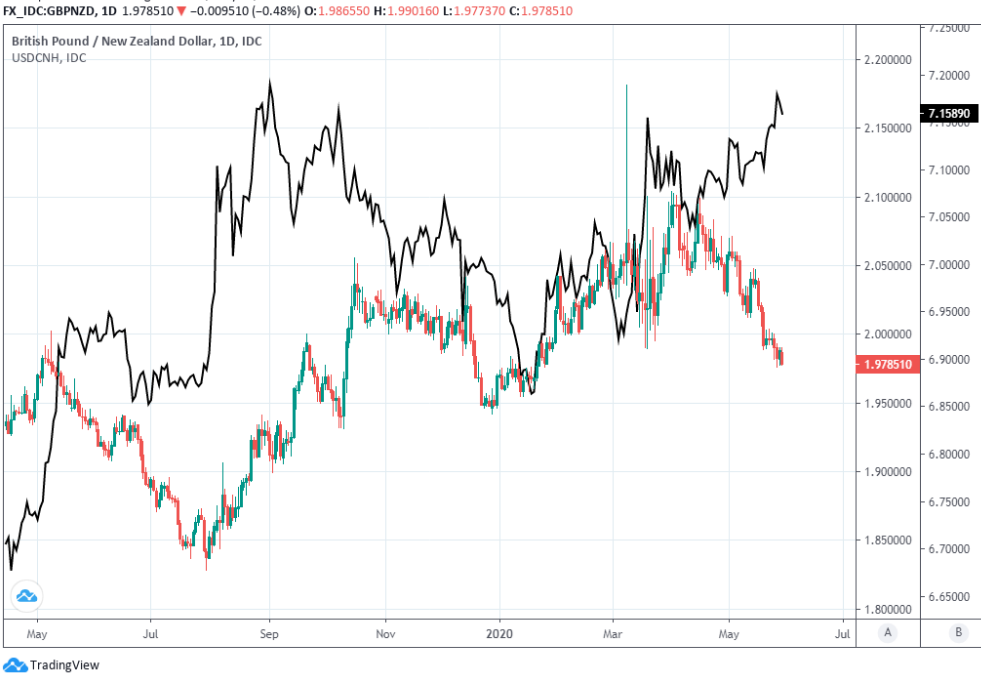