The introduction of quantitative easing, when combined with the negative sentiment in global financial markets, is likely to keep the New Zealand Dollar under pressure for the foreseeable future.

The RBNZ announced it would purchase N$30BN of New Zealand Government Bonds over the coming twelve months - with a range of maturities - in order to push down the yield paid on those bonds, thereby lowering the cost of borrowing throughout the economy.

The move comes just a week after the RBNZ slashed interest rates to a record low at 0.25% and is designed to ease pressure on the New Zealand financial system and on New Zealand businesses in the face of the global coronavirus outbreak.

"Financial conditions have tightened unnecessarily over the past week, reducing the impact of the low OCR on achieving the MPC’s mandate. Heightened risk aversion has caused a rise in interest rates on long-term New Zealand government bonds and the cost of bank funding," read a statement from the RBNZ.

The introduction of quantitative easing has been sign-posted for sometime and is therefore not an unexpected development. However, the scale of the programme is larger than markets had expected.

"This package is huge. Our analysis last week flagged the need for purchases of $15-20bn per annum, if not more, and this announcement is even larger with that. Our expectations were at the top end of market expectations, so we expect this package to have a significant impact," says David Croy, Strategist at ANZ.

"QE will help support the economy and soothe markets that have been dysfunctional. We believe this package will have an immediate and significant impact on the local bond market, especially with NZDM set to issue NZGBs at a $20bn annualised pace in Q2. There will be beneficial knock-ons across the credit spectrum," adds Croy.

Looking at the currency markets, the impact of the announcement on the NZ Dollar is apparent:

The Pound-to-New Zealand Dollar exchange rate is quoted at 2.0600 which is a percent higher than where it started trading on Sunday night. 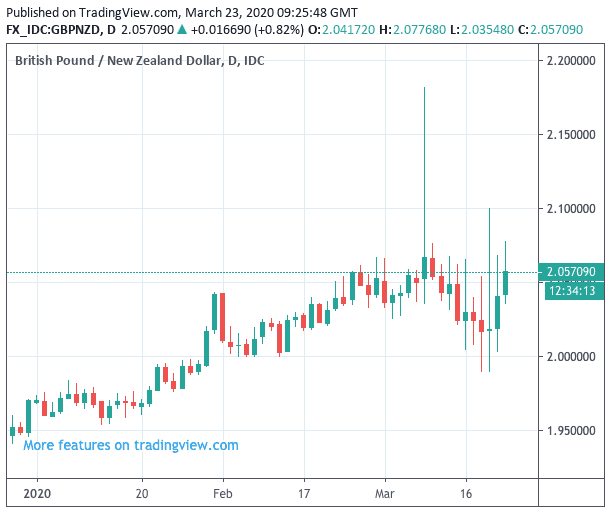 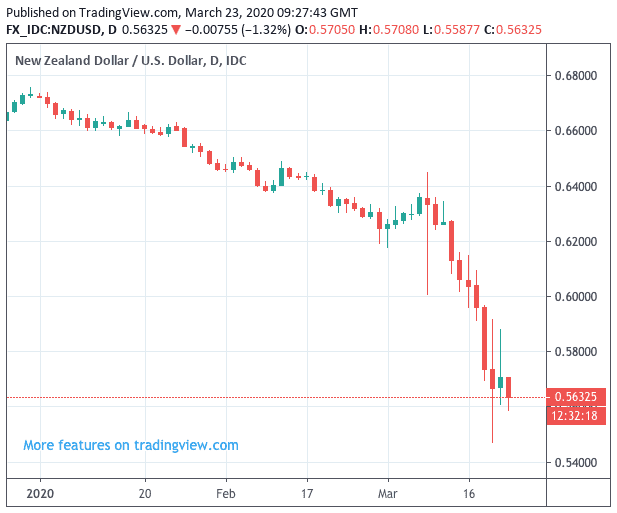 Typically, when a central bank announces a programme of quantitative easing the currency it issues tends to fall in value as the market is flooded with new money. This is particularly true when the announcement is either unexpected or the scale of the programme is larger than expected as is the case with the RBNZ.

The measures at the RBNZ come on the same day that both New Zealand and Australia enact further measures to stop the spread of coronavirus, which will have significant negative economic consequences.

"NZD and AUD were the big losers after the two governments announced lockdown measures. Australia is shutting down pubs and restaurants, while New Zealand will go into nationwide lockdown: everyone will be required to go into self-isolation and all non-essential businesses will close for at least four weeks," says Marshall Gittler, Chief Market Strategist at BD Swiss.

While the announcement of a quantitative easing package will likely weigh on the New Zealand Dollar in the near-term, we believe broader market sentiment will likely dictate the lion's share of moves in the currency over the coming week.

The New Zealand Dollar is particularly sensitive to global investor sentiment, rising when investors are bullish and global trade is increasing, while it tends to fall when investors are running scared and the global economic outlook deteriorates.

The latter backdrop is in evidence a the start of the new week as the effort to contain the spread of the virus steps up a gear right across the world, with most countries ordering strict 'social distancing' rules and the closure of restaurants, pubs, theatres and other socially-orientated businesses.

Meanwhile, a failure by U.S. politicians to agree on a fiscal rescue package has only enhanced a sense of investor gloom.

Global stock markets remain pointed lower as investors sell exposure to equities in anticipation of a deep recession. Asian markets lead the way by trading in the red and were followed by European markets where the FTSE 100 is seen trading 3.7% lower and the Germany DAX is seen 4% lower.

"The reason for the crash this particular morning is that the U.S. government is unable to come up with a rescue plan. The U.S. Senate gave up trying to negotiate a bipartisan rescue bill on Saturday and the Republicans wrote it alone. It was unable to pass on Sunday," says Gittler.

However Treasury Secretary Steven Mnuchin and Chuck Schumer, Senate's Democrat leader, signalled there was still room for a compromise.