- Brexit headlines to dominate GBP; RBNZ up for the NZD

The Pound-to-New-Zealand-Dollar rate was trading around 1.9167 Monday after falling more than one percent in the previous week, although signals coming off the charts increasingly suggest that further losses could be just around the corner for the exchange rate.

The GBP/NZD pair fell at the start of last week after it the government requested from Brussels only a very short delay to the Brexit process. It recovered later, however, after the EU left the door open to a much longer extension of the Article 50 negotiating window, and potentially an indefinite one if Prime Minister Theresa May fails again to get the EU Withdrawal Agreement through parliament. 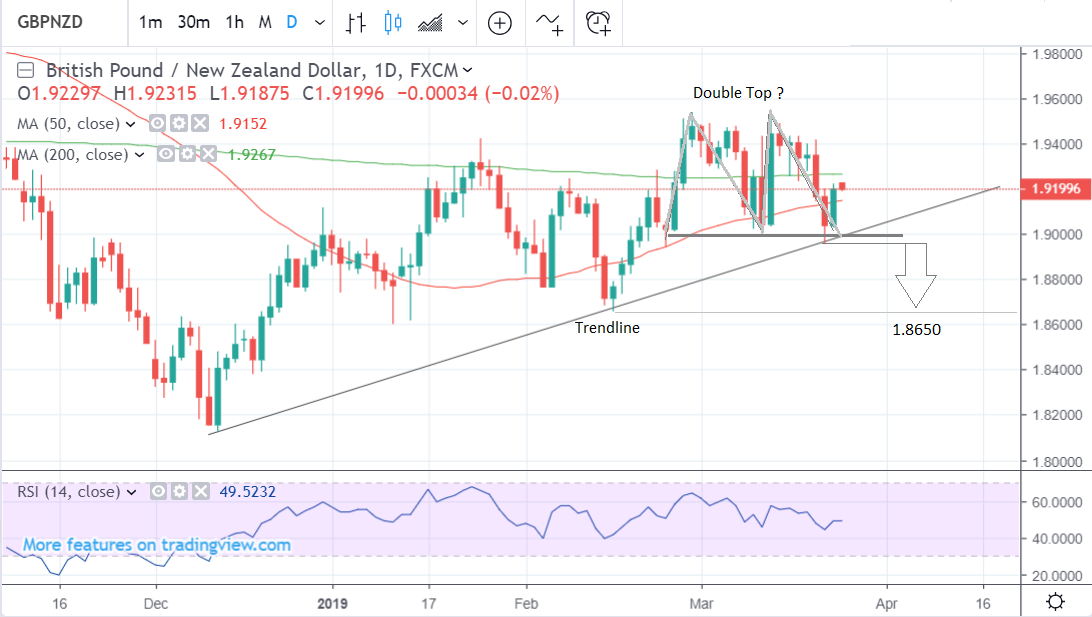 The technical outlook is becoming increasingly bearish in that a double-top pattern has now formed on the daily chart and is warning of more downside. It already appears to have broken below the neckline at the base of the pattern, but a break below the 1.8959 March 21 lows is necessary for confirmation of a further decline to the 1.8650 area, which is also the location of February's lows. 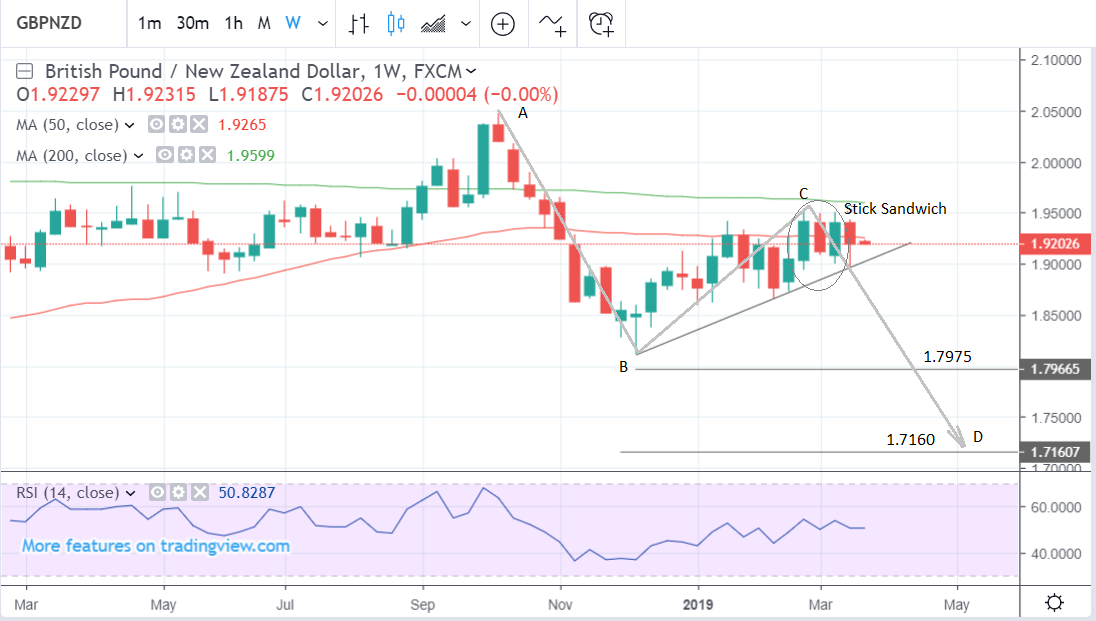 Price action on the weekly chart also looks indicative of another leg lower rather than fresh upside. The steep descent to the December lows that was followed by a gentle recovery up to the February 2019 high looks like an incomplete ABCD, or Gartley pattern.

Gartley patterns are large three-wave, zig-zag-shaped formations in which the first and third waves are usually of a similar length. If GBP/NZD does form such a pattern then the final wave could see the market fall as far as 1.7160. As a minimum it would decline to 1.7975.

A bearish Japanese candlestick pattern called a ‘stick sandwich’ has also formed at the February highs, which further suggests more loses in the pipeline. It is composed of three bars, the outer two of which are green up bars and the middle one is a red down bar. The outer two should ideally envelop the middle one like a sandwich.

The example clear on GBP/NZD chart is quite close to an ideal one. It suggests a reversal lower because the ‘stick sandwich’ was followed by a bearish week (last week) which enhances and helps confirm the negative signal.

The main event for the New Zealand Dollar in the week ahead is the Reserve Bank of New Zealand (RBNZ) interest rate decision due on Tuesday, 27 March at 01:00 London time.

Consensus is for the Bank to remain on hold by leaving its interest rate unchanged at 1.75% and repeating its message from February that the "next move could be up or down” but that it will be subject to incoming data.

Financial markets are still betting the RBNZ will cut its interest rate to a new record low before long given that economic growth is waning quickly and inflation has already been below the midpoint of the 1%-to-3% target for a number of years now.

The overnight-index-swap implied cash rate for November 13, the RBNZ's last 2019 interest rate meeting, was just 1.57% on Monday. This suggests investors see a high probability of a rate cut coming before year-end.

RBC Capital Markets, a Canada-headquartered global investment bank, said in February there is a high chance the RBNZ could surprise the market with a rate cut at this week's meeting. That was after the banks surprised the market with an optimistic tone at that meeting.

However, not everybody agrees with that view. Even though domestic data has been below par since the last meeting, it has not been bad enough to justify a change in stance, according to one of Australia's largest lenders, Westpac. The looming move to a committee decision-making format, in April, is a further reason not to expect any major changes in March.

“Weak house sales data recently might cause the RBNZ to lower its house price forecast a bit, and GDP in the December quarter was a touch weaker than the RBNZ’s February forecast. But overall, the RBNZ can still credibly stick to the view that the economy is set to pick up this year, especially in light of very strong consumer spending and building consent numbers coming through recently,” says Bill Evans, chief economist at Westpac.

The Kiwi is highly sensitive to developments in China, which is its largest trading partner.

U.S.-China trade talks are scheduled to kick off again on Thursday, 28 March. Any positive opening statements may support the Chinese Renmimbi and Australian Dollar although markets could soon begin to grow impatient with a lack of detail on the final shape of the trade deal.

President Donald Trump has tweeted that tariffs on Chinese imports will remain even after a deal is done, which is likely to cost the Chinese economy and could complicate the process of reaching a durable agreement.