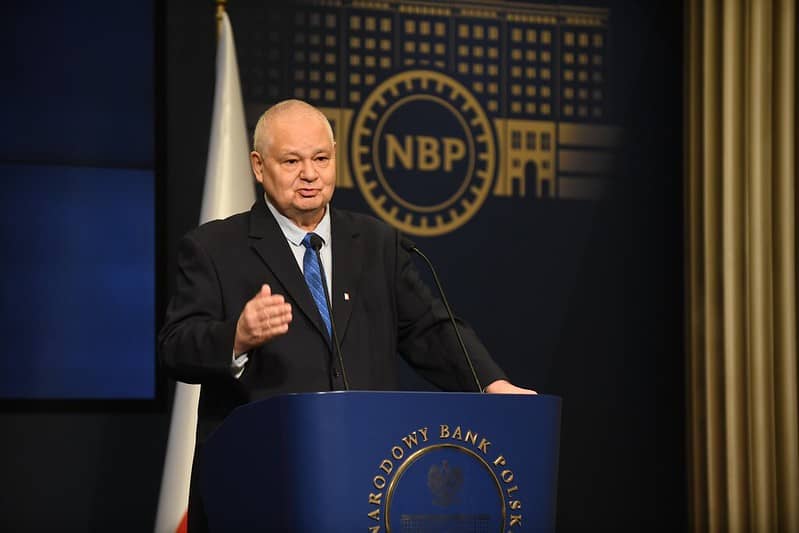 The Polish Zloty swept higher against all major currencies in midweek price action that saw it break above an important level against the U.S. Dollar and which indicates that further losses are potentially ahead for exchange rates like GBP/PLN and EUR/PLN.

The Zloty was already riding high on Wednesday after the National Bank of Poland (NBP) raised its interest rate in the prior session and said that further gains by the currency would be consistent with its monetary policy objectives, effectively welcoming strength in its exchange rates.

Rallying exchange rates can reduce inflation by cheapening the cost of imported goods and this is why Governor Adam Glapinski welcomed the advance in a Wednesday press conference where he outlined the factors underlying the NBP’s Tuesday decision to lift its interest rate to 2.75%.

“Expect further hawkish remarks from him (we see rates being raised to 4.50% this year from 2.75% now). Also expect further support for a stronger zloty,” says Chris Turner, global head of markets and regional head of research for UK & CEE at ING. 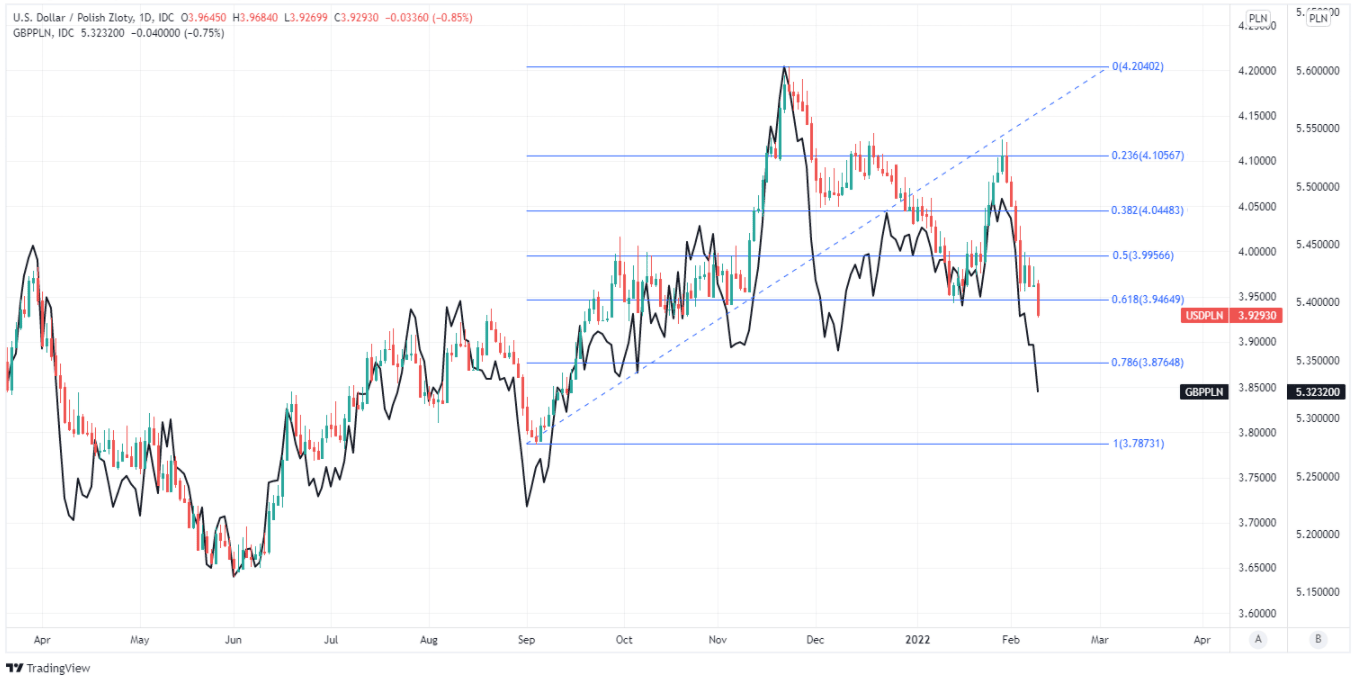 “It is quite rare to see a central bank, in its monetary policy release, effectively calling for a stronger currency. EUR/PLN could have a run at 4.50 today,” Turner and colleagues had written in a morning note to clients.

Tuesday’s rally had left USD/PLN testing a major level of technical support on the charts though this was quick to give way as the Zloty climbed further during Wednesday’s press conference and in price action that could be a sign of things to come for the Polish currency.

The above referenced decline in USD/PLN and the underlying break higher by the Zloty was enough to pull the EUR/PLN exchange rate beneath an equally important technical support level of its own just above 4.50, which potentially opens the door for a move toward 4.46 and 4.39.

“The subsequent statement on the monetary decision was relatively hawkish this time, suggesting that the NBP is aware of the strengthening economy and therefore wishes to tighten monetary conditions through a stronger zloty,” says Mathias Van der Jeugt, head of research at KBC Markets in Brussels. 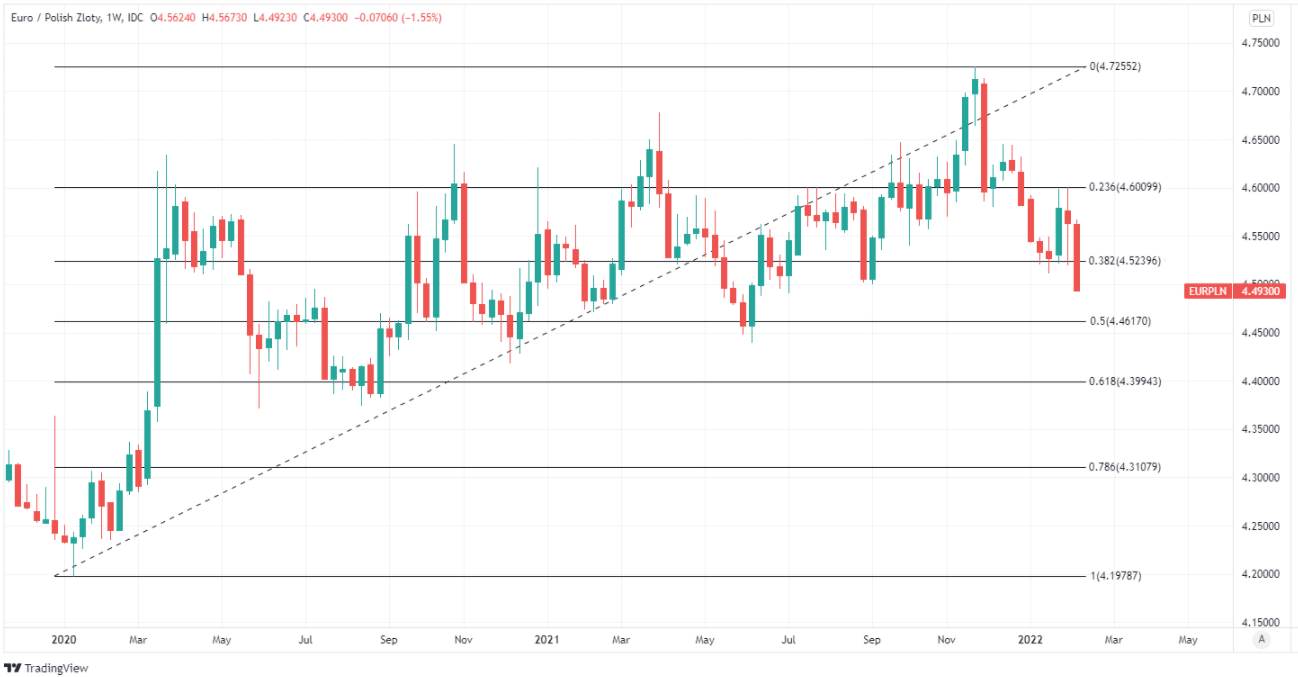 Above EUR/PLN shown at weekly intervals with Fibonacci retracements of January 2020 uptrend indicating likely areas of technical support for EUR/PLN.

The decline in the USD/PLN exchange rate also had the effect of weighing heavily on the Pound to Zloty exchange rate, which tends to closely reflect the difference in performance of USD/PLN and GBP/USD, all of which often tend to demonstrate a positive correlation.

Similar is true of EUR/PLN, and this is why both EUR/PLN and GBP/PLN would also be likely to fall further if Wednesday’s decline in USD/PLN continues.

“The scenario in which the Council will decide to speed up the tightening of monetary policy by increasing the interest rates by 75bp in March cannot be ruled out. The way EUR/PLN will run in the weeks to come, the publication of inflation data for January and the results of the March inflation projection will be important factors that will influence this decision,” says Jakub Borowski, a strategist at Crédit Agricole CIB.

The Zloty could strengthen further if the National Bank of Poland continues to lift its cash rate in response to recent and ongoing increases in inflation, which rose from 7.8% to 8.6% in December and has been above the central bank’s target since April 2021.

The inflation target is 2.5% and the National Bank of Poland’s mandate only permits deviations of up to one percent on either side of that level, hence why it began lifting the benchmark interest rate sharply from its coronavirus-inspired low of 010% back in October 2021.