- GBP/INR is rallying strongly and has broken above 93.0

- Positive Indian data has not had expected bullish effect on Rupee

GBP/INR has broken above the 93.0 level despite strong Indian data as the rising price of oil becomes a sticking point.

The pair is rising for the sixth day in a row as Sterling continues its winning streak whilst the Rupee weakens on fears about the rising cost of oil imports.

The Indian currency lost ground after sources in Saudi Arabia said the nation was secretly wishing for crude to rise to around 80 USD per barrel, which is quite a bit higher than the current 67.14 for the global benchmark West Texas Intermediate (WTI) variety.

India has to import most of its oil which constitutes roughly 35% of the country's total imports, so fluctuations in the price can impact heavily on the exchange rate.

The Saudi's are a leading partner of the OPEC cartel, a group comprising most major global oil producers who meet regularly to discuss oil prices and can price-target by managing global supply.

The fear is that OPEC is now planning to push up the price of oil by capping supply, and if it does it will be negative for the Rupee, as more of the currency will need to be sold to import the oil necessary to meet the country's energy needs.

This factor appears to have outweighed other domestic indicators which have actually been extremely benign of late.

Economic data out on Thursday, April 12, showed a positive combination of falling inflation and rising production - the magic mix most economies are aiming for but not all achieve.

Industrial Production slowed marginally to 7.1% from 7.4% but was higher than analysts' estimates of 7.0%, and was thus viewed as better-than-anticipated.

"Late Thursday’s inflation and production numbers were encouraging. March Inflation moderated (but higher than our forecast of 4.1%), whilst production rang in another good month," says Radhika Rao, an economist at DBS Economics.

The view was echoed by Ulrich Leuchtman, an analyst at Commerzbank.

"There were good news on the data front yesterday with production coming in better than expected at 7.1% y/y while inflation continued to moderate," said the analyst.

Due to the lower inflation, both analysts expect the Reserve Bank of India (RBI), the body tasked with setting interest rates, to remain on hold in 2018.

Usually higher interest rates help a currency by attracting more inflows of foreign capital, drawn by the promise of higher returns, however, given the lower inflation in India is being viewed as an economic positive the inflows will probably come anyway, simply because the economy is showing signs of good health.

Ultimately, what does it all mean for the Rupee?

In a nutshell, it should end the rout which has bedeviled the currency recently - and the USD/INR exchange rate is expected to enter a sideways range, according to Commerzbank's Leutchtmann.

"For USD-INR, the improved growth-inflation dynamics should also help it to stabilize and we look for the 64.50-66 range near term," says the analyst.

Emmanuel Ng, strategist at OCBC Bank also holds a neutral/bullish outlook for the Rupee, based on a combination of factors, which include the fact that the foreign investor limit on government bonds has been eased, that net equity inflows are moderating, and government prudence due to not borrowing as much.

Finally, from a technical and chart perspective the signs are that the GBP/INR pair is likely to continue in its strong uptrend, which is Rupee negative and Pound positive (see chart below).

Our previous view that it might be forming a topping pattern called an 'ending diagonal' is increasingly subject to doubt after the Pound's strong rise of recent days which has taken it above some key levels, including 93.00. 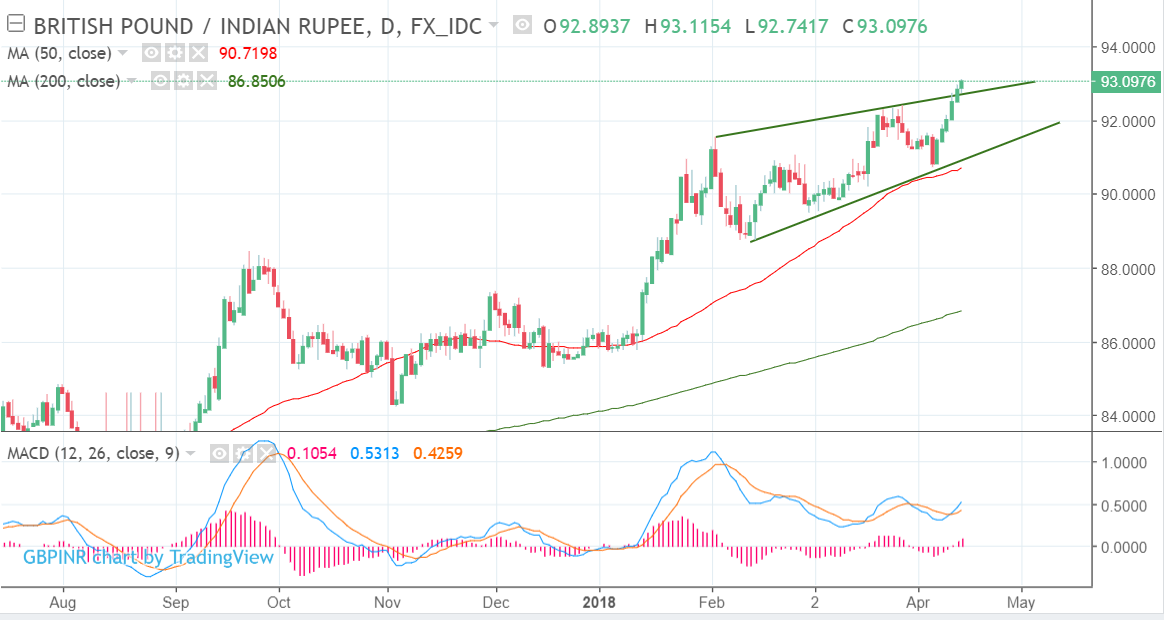 Although momentum, as measured by MACD in the bottom pane, is declining at the same time as the market is rising - an indication of underlying weakness - this is not enough of an indicator on its own to suggest the pair is about to reverse trend.

It has broken above the upper border of the topping pattern and is punching higher towards our next upside target at 94.00, evidencing a clear bullish bias.