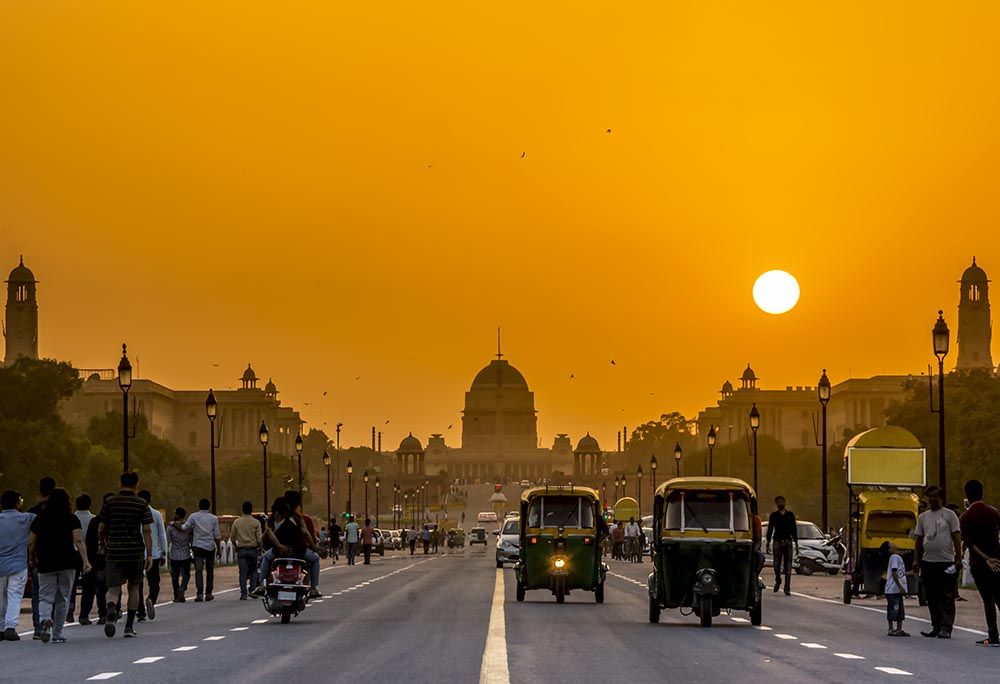 - This could lead to a recovery, reversing previous bearish conviction

- Rupee is likely to be moved by OPEC meeting

The Pound-to-Rupee exchange rate is trading at 87.15 at the time of writing, after declining almost 1.25% in the week before, and studies of the charts suggesting the exchange rate will probably continue in a sideways trend in the short-term.

The pair has been trading along a key support line, or ‘neckline’, since the start of June. A break of this line would be considered very bearish. 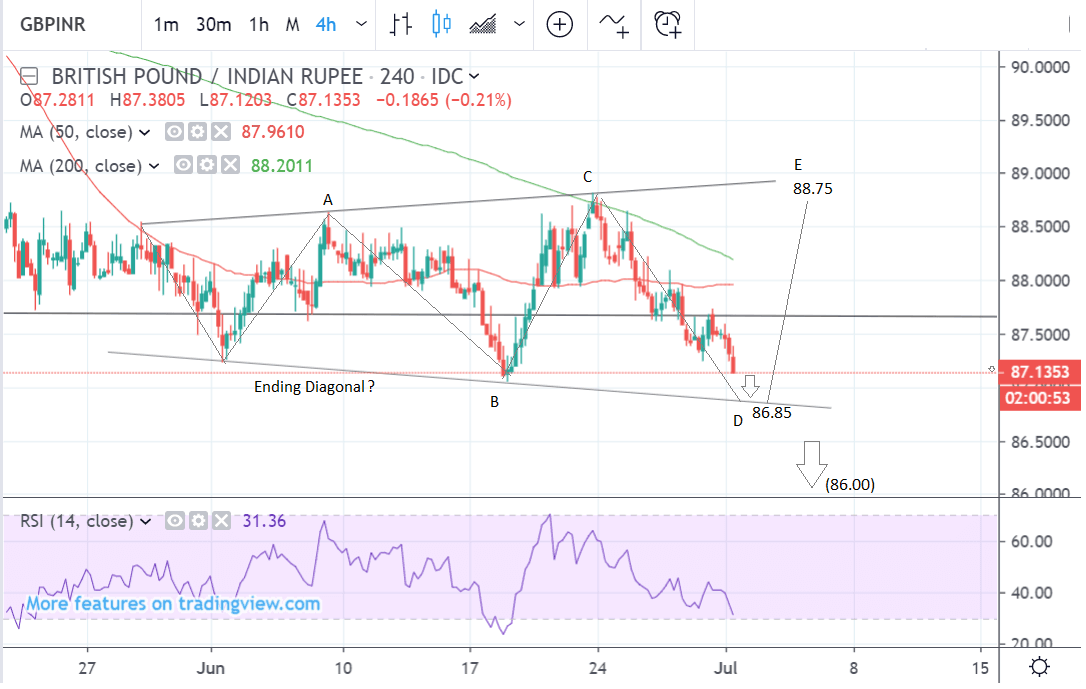 Every time it looks like it is about to break definitively below the line and continue down, the exchange rate recovers and so despite several attempts the pair has not properly broken lower yet.

Most patterns are composed of 5 waves so after E the probabilities of a breakout in one direction or another increase substantially.

‘Ending diagonal’ reversal patterns are bullish when they occur at the end of a downtrend such as this one. They suggest a reversal is on the cards and are often succeeded by a rapid rally.

Such patterns are very difficult to identify, however, and we are not 100% certain about the bullish connotations yet.

It could also be possible the pair is forming a continuation pattern of some sort with bearish implications.

If so, then a clear break below the lower borderline, confirmed by a move below 86.50 could indicate the start of a continuation down, to a target at 86.00.

The 4hr chart is used to analyse the short-term trend, which is defined as the outlook over the next 5 days.

The daily chart shows the pair consolidating in its potential ending diagonal pattern at the level of the neckline. 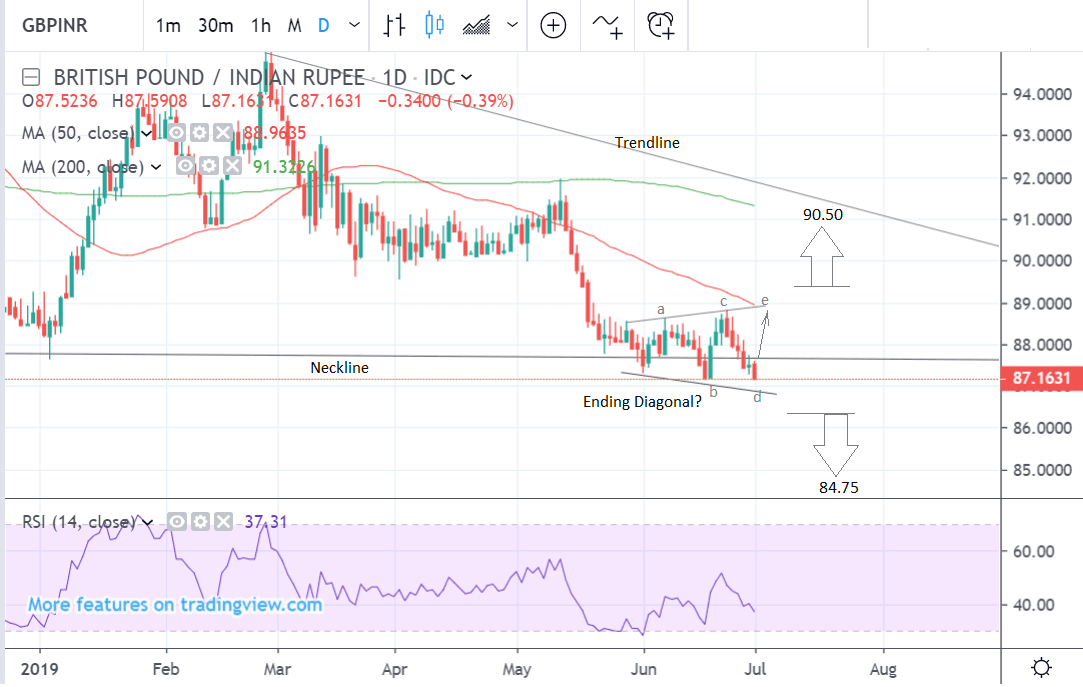 The RSI momentum study is constructive and suggests a move higher is on the cards. This seems to support the evidence from the 4hr chart that the pair will next rise up in a wave E to 88.75.

After that, it is possible the pair may breakout from the confines of the pattern and continue higher. A break above 89.50 would confirm a continuation up to a bullish target of 90.50.

The daily chart is used to analyse the short-term trend which is defined as the outlook over the next week to one month.

The weekly chart shows the bearish head and shoulders (H&S) topping pattern. This is normally a very negative sign. 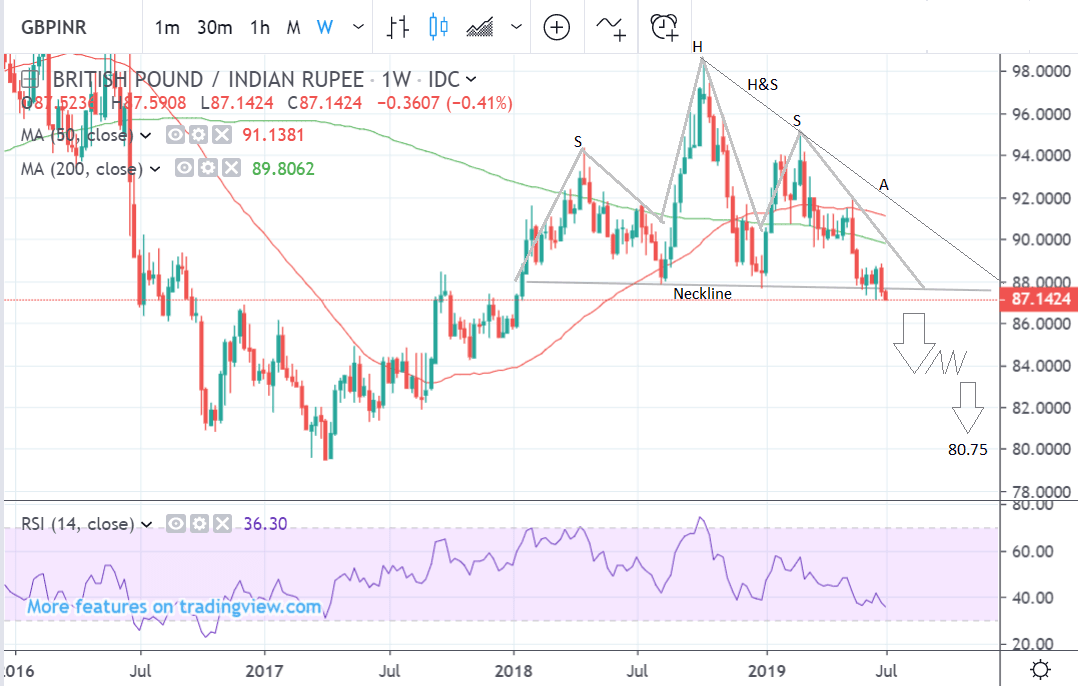 It is composed of three peaks - a head and two shoulders. A break below the neckline triggers the subsequent decline.

The bearish implications of the H&S pattern would only be negated if the exchange rate broke above the trendline labeled A connecting the top of the head and the right shoulder.

The H&S still looks like it will lead to deeper declines with a possible eventual end target at 80.75, calculated by taking the height of the pattern at its tallest and extrapolating it down.

The weekly chart is used to analyse the short-term trend which is defined as the outlook over the next couple of months.

The Rupee: The Trump-Xi Effect

Global risk trends are likely to be another major driver of the Rupee.

The Rupee started the week strongly in a large part as a result of positive news from the outcome of the G20 in relation to U.S - China trade talks.

Both sides also said they would not be raising further tariffs for the foreseeable future.

"President Trump agreed a détente with President Jinping, bringing some respite from the ongoing trade war. It should provide some short-term relief to markets," says Sebastian Burnside, Chief Economist at RBS, adding:

"The trade war has been impacting economic activity in recent quarters, clouding the global outlook. Meanwhile the threat of a further dose of tariffs on the remaining $300bn or so of Chinese exports to the U.S. was looming. So markets were hoping for signs of progress between Presidents Jinping and Trump at the past weekend’s G20. They got their wish."

Risky emerging market assets, including the Rupee, commodity currencies, the Dollar and stocks all rose on Monday morning as a result of the news.

The early bullish exuberance from the G20 was tempered later by some negative data from China, as well as Australia and Japan, which continued to indicate a probable slowdown in the global economy.

Chinese Caixin PMI, which is a survey-based leading activity indicator for smaller and medium-sized businesses in China used to complement the official PMI, declined.

Caixin manufacturing fell from 50.2 to 49.4 in June when it had been expected to fall to only 50.0. This is significant because the 50.0 level distinguishes contraction from growth, and it means Caixin manufacturing has joined the larger corporate PMI in contraction territory. The official PMI also undershot, coming out at 49.4 instead of 49.5.

PMI’s for all economies will be out this week providing a leading indication of global growth, and this may impact on the Rupee if the negative trend set by Chinese and Australian data is replicated in other countries.