Pound Sterling was the best-performing major currency in the G10 space on Thursday, September 20 as traders responded to official data showing retail sales staged a strong increase in August, despite analysts overwhelmingly anticipating numbers to show a decline.

The Office for National Statistics reports U.K. retail sales volumes rose by 0.3% during August which, although down from the 0.7% pace of growth seen back in July, stands in stark contrast to the analyst consensus for a -0.2% contraction.

Retail sales grew by a total of 3.3% during the year to the end of August which, despite being down from the 3.8% bumper rate of growth seen in July, was ahead of the consensus for an annual expansion of 2.3%.

The clear beat on expectations lead traders to snap up Sterling and ensure the currency's strong September run extends. In the wake of the data release the currency has registered fresh two-month highs against both the Euro and Dollar.

All retail segments saw growth during the recent month except those in the food, clothing and petrol space, according to the ONS.

The ONS says the data is in part the result of store prices "stabilising" after almost two years of rising inflation that had depressed the value and volume of goods that consumers were able to buy.

"Despite inflation ticking up in August, prolonging the squeeze on real incomes, retail sales volumes increased," says Andrew Wishart, an economist at Capital Economics. "Retail sales only account for about a third of total household spending, so the strength of spending on the high street could be offset by households reducing their outlay elsewhere. But the Bank of England Agents Scores suggest that consumer services spending strengthened in August."

Wishart and the Capital Economics team say the data leads them to believe there will be "some strengthening" in consumer spending in the third-quarter, which should prove positive for broader economic growth during the period.

Many economists had anticipated a slowdown in August given July's numbers were flattered by increased sales of food and drink due to the abnormally warm temperatures and the football World Cup.

Currency markets care about retail sales because they are a leading indicator of economic growth and because rising or falling consumption can influence inflation. It is inflation the Bank of England is attempting to contain when it raises interest rates, which are in turn a raison d'être for most moves in exchange rates.

The Pound was quoted 0.40% higher at 1.3192 against the Dollar following the retail sales release, ensuring a clear uptrend in place since August remains intact: 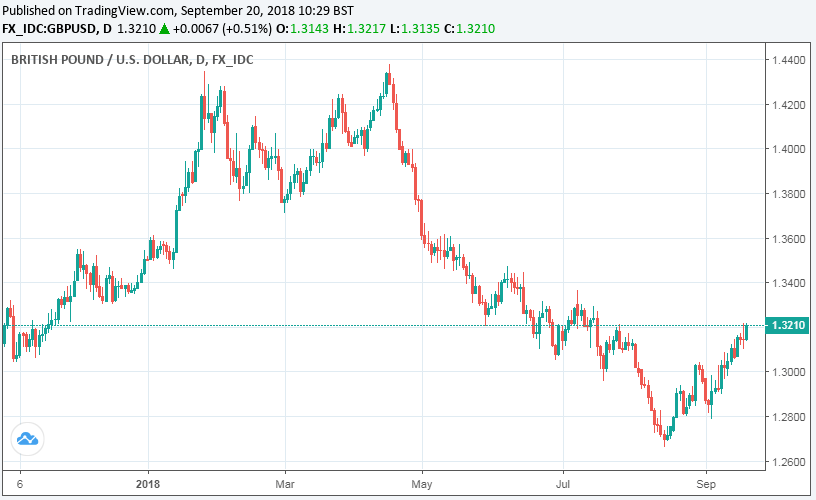 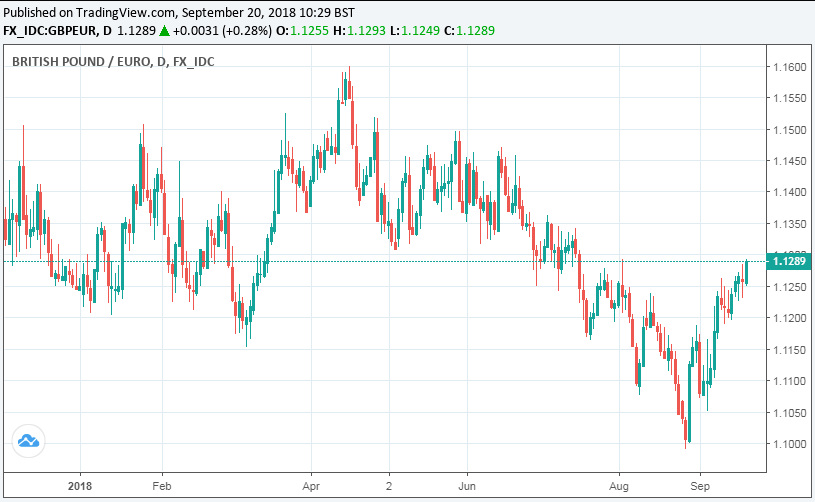 The Pound is actually the best-performing G10 currency on the day courtesy of the numbers: 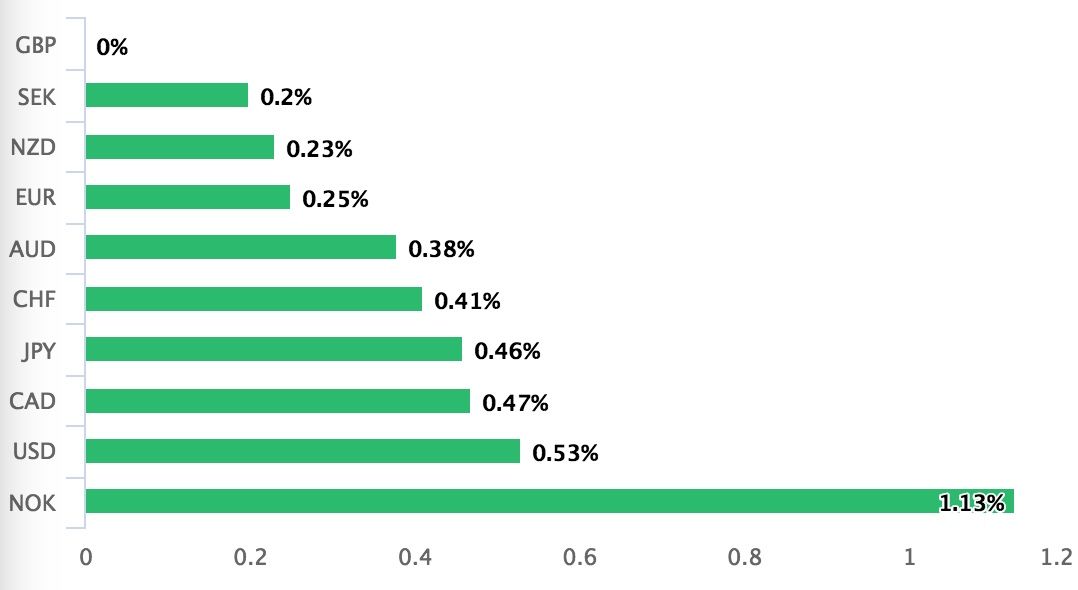 However, there are concerns that the August outperformance might not translate into a sustainable run higher in retail sales.

"August’s further increase in overall sales volumes sets them up for a strong quarter-on-quarter gain of about 1.5% in Q3, only a bit below Q2’s 2.1% increase. We doubt, however, that growth in retail spending will retain its recent momentum," says Samuel Tombs, chief U.K. economist at Pantheon Macroeconomics.

"As a result, we still see only a slim chance that the economy will have enough near-term momentum to persuade the MPC to raise Bank Rate again before the risk of a no-deal Brexit has lifted," adds Tombs.

"As the sun kept shining, UK retail sales edged higher by 0.3% in August following a very strong July trading period. However, now that the better weather is fading, we think retailers have another challenging few months ahead of them. Despite some better news on wage growth over recent months, real incomes remain under pressure from higher inflation," says James Smith, an economist at ING Group.

Despite suggestions retail sales outperformance might not last, we get the sense that the U.K. economy continues to head in a direction that makes the Pound significantly undervalued.

Wage, inflation and employment data have all beaten expectations this month.

Of course the undervaluation in Sterling stems from Brexit uncertainty, but should a Brexit deal be secured by November then we see the prospect of a surge higher in Sterling to levels more aligned with economic performance.

"The UK economy is continuing to expand above trend, wage growth is picking up and inflation has moved further above target. We currently expect the BoE to raise rates again in May of next year, although the argument in favour of another hike as early in February is strengthening," says Lee Hardman, a currency analyst with MUFG.

Thursdays data follows closely behind the release of inflation data for August, which showed the consumer price index rebounding during the recent month, taking it up to 2.7%.

This was ahead of market forecasts and although many economists see the boost as a purely temporary phenomenon, it has put the Bank of England back in focus for markets.

The Bank of England has already raised interest rates twice inside of the last year in order to contain what it says are rising inflation pressures and to return the consumer price index to its 2% target.

"The developments should encourage the BoE to adopt a more hawkish tone in future policy communication. The UK economy is continuing to expand above trend, wage growth is picking up and inflation has moved further above target," says Hardman.

As mentioned, MUFG see an interest rate rise in May, but improved data makes the case for a February rate rise increasingly pertinent.

Of course, "the main impediment to an earlier hike is the uncertainty over the potential timing of reaching a final Brexit agreement and passing the required legislation," says Hardman.

Until this week the Bank of England had been expected to sit on its hands until at least 29 March 2019, the date when the U.K. is set to officially depart the European Union.

To a certain extent, it still is expected to stand pat but MUFG's comment highlights that increasing numbers of analysts are contemplating whether it could move sooner.

All of the U.K. data comes as European political leaders meet in the Austrian city of Salzburg to discuss resolving the bloc's migration crisis and the next steps to take in the Brexit negotiations.

The gathering takes place amid increased optimism and elevated hopes that an agreement on terms of the U.K.'s withdrawal from the EU can be reached ahead, of or shortly after, a special European summit set for November.

Headlines have not been constructive with a host of leaders confirming the deadlock over the Irish border remains entrenched and European Commission President Jean-Claude Juncker saying a deal was "far away".

"The Salzburg EU summit appeared to make little progress on Brexit; PM May appealed
for concessions from the EU but France and German sounded less confident on a deal," says Shaun Osborne, a foreign exchange strategist with Scotiabank. "We think recent Brexit optimism is somewhat misplaced."

This came after The Times reported Monday that Brussels is now willing to consider PM May's idea that technological solutions be used in order to manage the border between Northern Ireland and the Republic, which suggested at first glance that there had been progress in the talks.

But it transpires Brussels had not dropped its push to effectively annex Northern Ireland into the regulatory and legislative orbit of the EU after Brexit, leading PM May to reject Barnier's overtures. Likewise, Barnier remains concerned about aspects of May's plan that could compromise "the integrity of the single market".

The EU's Barnier said last week a deal could be struck by early November after already having told a U.K. parliamentary committee he is open to considering alternative "backstop" proposals for the Northern Irish border if an agreement on the future relationship is not made during the transition period.

If the talks fail to deliver a viable deal before early November the odds of a so-called "no deal Brexit" will increase significantly, leading markets to fear the U.K. defaulting to trade with the EU on World Trade Organization terms.

AdvertisementGet up to 5% more foreign exchange by using a specialist provider to get closer to the real market rate and avoid the gaping spreads charged by your bank when providing currency. Learn more her