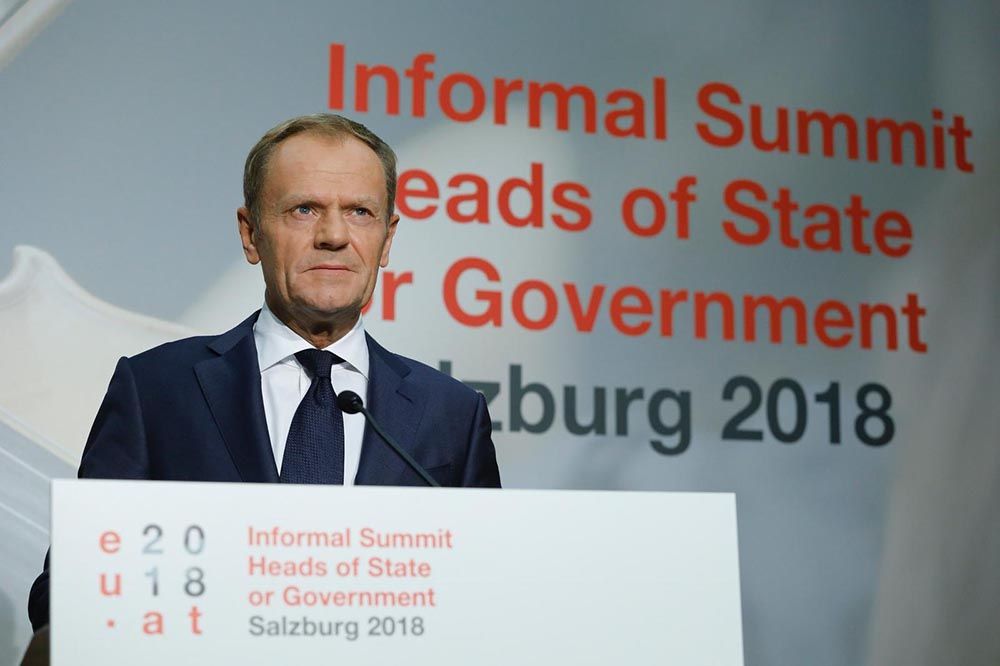 A stark reminder of the challenges facing Brexit negotiators is issued by the European Council's Donald Tusk and other European leaders who have effectively killed off Theresa May's Chequers proposal following an informal summit of the European Council in Salzburg, Austria.

Speaking at the summit, Tusk said the U.K. should rework their proposals on the Irish border.

The Irish border has become a proxy fight for 'hard' and 'soft' Brexit and the success of the negotiations appear to hinge on the matter.

On the Irish question, and the framework for economic cooperation, "the UK's proposals will need to be reworked and further negotiated," says Tusk.

While Tusk sees hope for progress, the problem is time is running short.

"Therefore, every day that is left, we must use for talks. I would like to finalise them still this autumn. This is why, at tomorrow's meeting of the twenty-seven, I will propose calling an additional summit around mid-November," says Tusk.

November now appears to be the target date markets will focus on.

"The Brexit negotiations are entering their decisive phase. Various scenarios are still possible today, but I would like to stress that some of Prime Minister May's proposals from Chequers indicate a positive evolution in the UK's approach as well as a will to minimise the negative effects of Brexit," says Tusk.

This week EU Brexit negotiator Michel Barnier said the EU were willing to improve their offer on the Irish border; this was just the latest in a string of constructive messages from Barnier issued through the course of September.

The EU are clearly determined to push negotiations forward in order to find a solution, but we note the red-lines set out by both sides of the negotiating table look to be entrenched.

This is simply unpalatable to Theresa May's government and May's spokesperson rejected Barnier's overtures on this sticking point.

The rejection prompted a sudden fall in the value of Sterling. "A deal could be further than initially thought, which puts Sterling at risk of a correction," says Kathy Lien, Director at BK Asset Management in New York.

Nevertheless, there is certainly evidence of the two sides finding common ground. For instance, the EU now acknowledges technology can help solve the puzzle, something the UK has long argued and the EU has until recently rejected out of hand.

While September has seen risks of a 'no deal' Brexit decrease, allowing the Pound to recover from multi-month lows, they have not died entirely and the fear of what might happen to the Pound in the event of a failure in negotiations is likely to keep investors nervous.

Big Downside Forecasts for the Pound if Talks Fail

For the Pound, the stakes are high.

Wall Street investment banking giant Goldman Sachs tell clients they think a 'no deal' Brexit in March 2019 is unlikely, but "the political environment at Westminster is fraught, and a breakdown of negotiations cannot be ruled out."

"If it were to happen, our FX strategists argue that a combination of heightened uncertainty and prospective adjustment could precipitate a 10% nominal Sterling depreciation in the first six months," says Adrian Paul, a foreign exchange strategist with Goldman Sachs in London.

According to Goldman Sachs, if the UK were to leave the EU with 'no deal', two factors would be likely to precipitate a sharp depreciation in the Sterling exchange rate:

Second, the UK would begin trading with the EU on the basis of WTO tariff rules.

Analysts at Swiss investment bank UBS meanwhile warn the Pound would be destined to trade below parity against the Euro for years to come in the event of a 'no deal' Brexit taking place in 2019.

In a recent strategy note to clients, strategists warns currency markets are actually taking a reasonably benign view of Brexit risks; "this leaves the balance of risks skewed to the downside."

Today, the exchange rate is quoted at 1.1265; this implies a 21% decline in value within the space of a year.

UBS warn that should the role of the UK as an international hub be limited by Brexit, "the adjustment in the UK's international accounts is bound to be substantial."

Therefore, according to UBS, the only way forward for Sterling against the Euro is lower, even in the event of a positive outcome to talks.