- But Pound could shake off disappointment as data unlikely to shake Bank of England policy.

The British Pound about-turned and sank lower against a basket of comparable rivals during the morning session in London Thursday after the all-important services sector PMI fell much further than was expected by economists for the month of March.

Thursday’s IHS Markit services PMI fell to 51.7 in March, which is down from 54.5 in the previous month and much lower than the 53.9 reading that markets were looking for. This now leaves the index at its lowest level since the July month after the Brexit referendum of 2016 and has left some economists wondering whether the UK economy has caught something more serious than a winter bug.

Indeed, the snow disruptions experienced in March are seen as being the main culprit behind the slowdown, and unless a sharp rebound is recorded next month there will certainly be a turn in sentiment towards the economy.

The surprise prompted a knee-jerk slide in Sterling but for now we note losses are limited with markets apparently happy to put the dire reading down to snow disruption and unusually cold weather.

IHS Markit do however report that continued political uncertainty and input cost pressures were cited by some respondents in the survey as reasons behind the March malaise. High cost inflation was attributed to rising staff salaries and increasing food and drink prices while "Brexit uncertainty" and bad weather were said to be behind a number of stalled projects.

The services PMI measures changes in industry activity by asking respondents to rate conditions for employment, production, new orders, prices, deliveries and inventories. A number above 50.0 indicates industry expansion while a number below is consistent with contraction. Markets care about the release because it provides reliable insight into current conditions in the UK's largest economic sector and is a leading indicator of activity further down the line.

"The details of the survey were not particularly encouraging either, with all of the main sub-balances falling on the month. Note too that the survey does not include the retail sector, which is typically one of the hardest hit by severe weather – so possibly understates the weakness," says Paul Hollingsworth, a senior UK economist at Capital Economics. 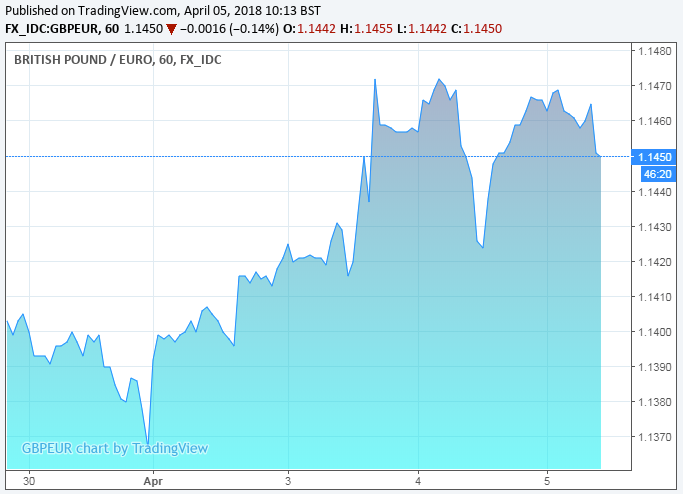 Sterling was quoted 0.31% lower at 1.4042 against the Dollar following the release after extending an earlier loss, while the Pound-to-Euro rate reversed an earlier gain to trade 0.10% lower at 1.1451.

The Pound also turned lower against the Japanese Yen, Swiss Franc and Canadian Dollar after previously trading a fraction higher on the session. 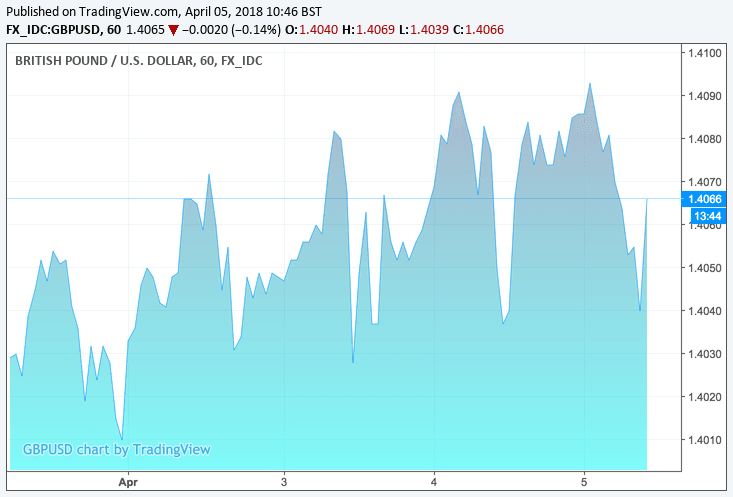 Above: The Pound has struggled against the Dollar on April 5.

"The all import service sector is heavily monitored by Pound participants given the make up of the economy. Sterling, I suggest, is selling off on a disappointing number. Fingers will point to the beast from the east, but my sense is longer term underlying issues remain in play, especially given this is the weakest number since the Brexit vote," says Neil Jones, head of corporates and financial institutions at Mizuho Bank.

Thursday's data comes hard on the heels of similar surveys of the construction and manufacturing sectors, both of which painted a mixed picture of economic activity. Manufacturers enjoyed another good month, albeit with a slower pace of growth, although the beleaguered construction industry slumped deeper into the red after snowfall hindered production.

"The ‘Beast from the East’ that brought unusually heavy snow to the UK looks like a notable contributing factor to the very sharp drop recorded in the UK Construction PMI released yesterday. A sentiment-based report is certainly one place you would expect bad weather to show up quickly, but the report does highlight the potential for other data to also show weaker activity given the extent of disruptions nationwide," says Derek Halpenny, European head of global markets research at MUFG.

The recent period of snow and colder temperatures is expected to dent UK economic growth for the first quarter. Already, retail sales tracked by the Confederation of British Industry fell sharply last month and economists forecast the official numbers will do the same when released later in April.

"Taken together with the manufacturing and construction surveys released earlier this week, the all-sector PMI is consistent, on the basis of past form, with quarterly GDP growth of about 0.3% in Q1 – in line with the MPC’s forecast," Hollingsworth adds. "While this is weak, if past occasions of bad weather is anything to go by, any spending or activity lost is likely to be made up in time. As a result, we don’t think that the weaker surveys prevent the next hike in interest rates coming in May."

This weather-induced disruption adds to an already muddy picture of the UK economy after the fourth-quarter GDP report was also impacted by one-off events, such as the closure of a key oil pipeline in the North Sea during November, which dented industrial production and lowered GDP growth for the period. However, other economic barometers such as the unemployment rate and wage growth numbers remained firm in amongst all of this.

But, Bank of England Still Likely to Raise Rates in May

Unemployment fell back to a 42 year low of 4.3% in the three months to January despite a continued rise in the participation rate, as the economy created 168,000 new jobs during that period. This was twice the number of new jobs expected by even the most bullish forecasters.

Meanwhile Bank of England data has shown wages picking up thanks to a tightening labour market and improved profitability in the manufacturing sector. Wage pressures are important for the economy and Pound Sterling because of their influence over demand growth and inflation.

This is part of the reason why economists forecast the BoE will continue to raise interest rates this year even though the consumer price index is already in retreat from the 3.1% high seen in November last year. Inflation is what the BoE seeks to contain when it raises interest rates, which are themselves the predominant driver of exchange rates.

"While we may experience some additional data like the construction report yesterday, we do not expect the MPC to be swayed from hiking rates next month. We expect the gradual easing of Brexit uncertainty along with increased wage growth to be compelling reasons for the BoE to act. So, the pound is likely to remain well supported ahead of the MPC meeting on 10th May. Any weather-related weak data that fuels GBP selling is unlikely to prove sustained," MUFG's Halpenny adds.

#BOE still remains much more likely than not to raise #interest #rates from 0.50% to 0.75% at May #MPC meeting despite softer #UK #economic news. BOE expects any hit to #economic activity in Q1 from weather to be temporary & is keen to gradually normalize #monetary #policy https://t.co/MnvE2uFcpT

The Bank of England already raised the base rate by 25 basis points to 0.50% back in November 2017 and said in February that it will raise rates faster and further than the market expects if the inflation outlook evolves in line with its latest forecasts. It predicted the consumer price index would be above the 2% target until at least the first quarter of 2021 although consumer price inflation fell from 3% to 2.7% that same month.

Pricing in interest rate derivatives markets, which enable investors to protect themselves against changes in interest rates while providing insights into expectations for monetary policy, suggests a greater than 50% probability of another rate hike in May with the market-implied bank rate on May 10 sat at 0.63%. Any change in this implied probability between over the next six weeks will have a significant impact on Sterling.