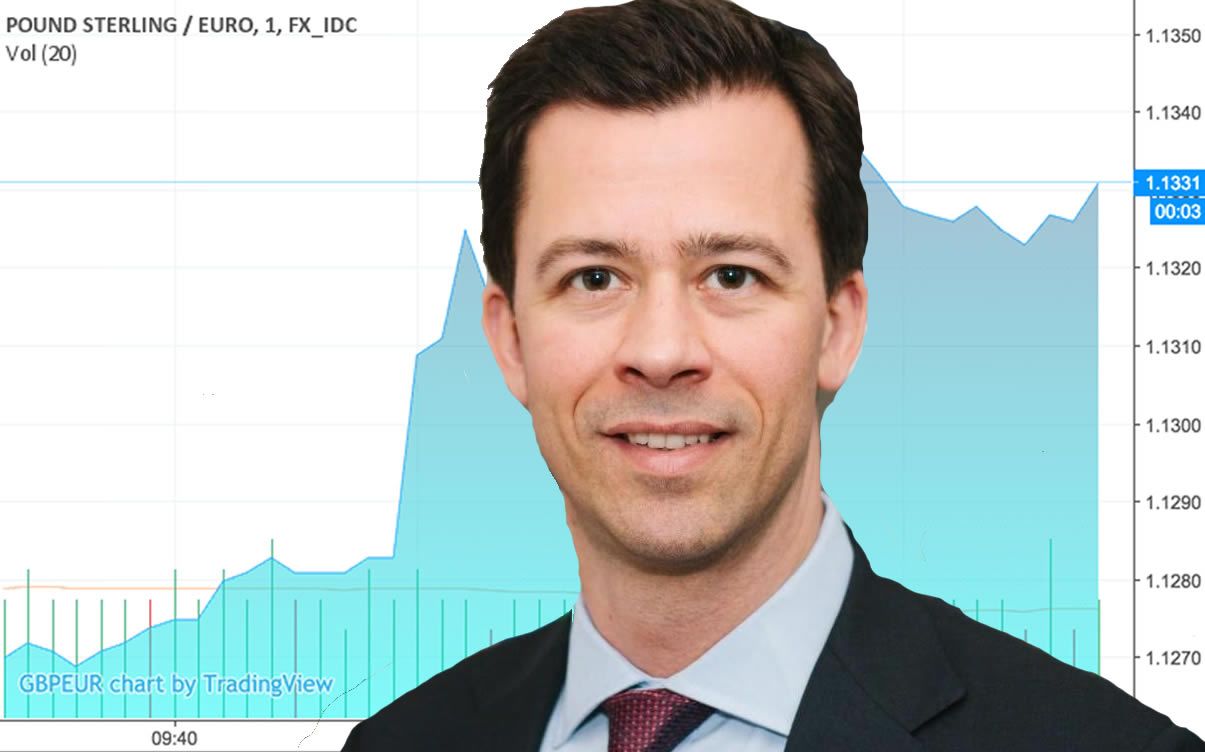 Above: Gertjan Vlieghe will speak today and add to the discussion regarding UK interest rates. His views could prove significant for Sterling. (C) Pound Sterling Live, Bank of England

Pound Sterling starts the new week on a firm footing with comments from a key member of the Bank of England helping shift focus away from Brexit, and back onto the more GBP-positive story of interest rates.

Brexit-related risks are clearly a threat for Sterling, but today focus will be on speeches from two Bank of England decision makers.

Sterling was seen stable thanks in part to one of the more cautious policy-makers on the Bank of England's Monetary Policy Committee who surprised some by suggesting, yes, interest rates might need to go higher.

"If there is less credit headwind to UK economy, then maybe ready for higher rates," Vlieghe told a panel discussion on household debt.

Vlieghe is known to be on the more 'dovish' spectrum of the MPC, i.e. he is one of those least likely to advocate for higher interest rates in the current environment and his comments would therefore suggest that a May interest rate rise is indeed in prospect.

Sterling jumped against a bag of competitor currencies in the previous week when the Bank of England warned markets of being too cautious in their expectations for the pace of interest rate rises required over coming months. "Monetary policy would need to be tightened somewhat earlier and by a somewhat greater extent over the forecast period than anticipated at the time of the November report," read a key element of the minutes to the Bank's February policy meeting.

The UK economy is "headed for slightly higher rates" says Vlieghe who believes the rise in debt burden seen in the UK is ultimately unsustainable over coming years. Higher lending rates should dampen demand for credit and help curtail risks of another debt-led financial crisis.

The economist adds that there is increased evidence that a "tight labour market" is beginning to have an upward impact on wages, which would likely raise inflation going forward.

However, the Bank of England is not done as another member of the MPC - Ian McCafferty - will be heard later in the day.

"There’s an interesting contrast between the two speakers from the Bank of England’s Monetary Policy Committee (MPC)," says Marshall Gittler at ACLS Global. "Vlieghe is considered one of if not the most dovish MPC members and might therefore speak out against an early hike in rates."

Gittler meanwhile points out that McCafferty is however considered an 'uber-hawk' - i.e. someone who is inclined to believe interest rates should be higher than where they are and has voted several times to raise rates when almost nobody else did.

"It will be interesting to hear what he has to say in light of last week’s unanimous vote to hold rates steady," says Gittler. "The two gentlemen together will give us a good view of where the extremes lie in MPC thinking. We can assume that the median view of the nine members will be somewhere in the middle."

Too Soon to Panic on Brexit Headlines

The British Pound fell sharply in reaction to the first major Brexit negotiation headlines of 2018 which came out on Friday, Feb 09 which suggest a souring in the relationship between EU and UK negotiators.

The headlines came 24 hours after Sterling-supportive news from the Bank of England regarding the future of interest rates. "GBP gains proved short-lived, however, as broad USD strength and political headlines suggesting that a Brexit transition is not given should disagreements with the EU persist weighed on the Pound," says Dennis Tan with Barclays.

At the start of the new week however, the Pound appears to have stabilised with markets apparently content to take direction from other sources ahead of this week's inflation data and the emergence of any further Brexit-related headlines.

"A bounce in the GBP post the bad news about Brexit negotiations on Friday made it the best performer in the G10 in Asia. The EUR was close behind the GBP," reports Manuel Oliveri with Crédit Agricole.

It would appear that markets are inclined to believe that ultimately the EU and UK will find common ground and settle on an agreement.

"Although a continuation of negative political rhetoric would likely outweigh more aggressive BoE rate rhetoric in the near term, we expect signs of a common interest between the UK government and the EU to lead to a material reduction of a “crash-out” scenario and to support the GBP over the forecast horizon," says Tan.

Analysts at one of South East Asia's largest banks have told clients that correction lower in the Pound-to-Dollar exchange rate is not yet complete.

"While we have held the same view that the pull-back in GBP “has room to extend lower” to 1.3800 since last Tuesday (06 Feb, spot at 1.3960), the ease of which this strong support was taken out on Friday was unexpected," says Quek Ser Leang with United Oversees Bank in Singapore.

Sterling has over recent days withdrawn from a multi-month and 2018 high at 1.4346 taking it back below 1.40. At the time of writing the exchange rate is quoted at 1.3847 on the inter-bank markets with retail quotes for currency buyers seen starting at 1.3722.

The dominant debate at present is over whether the decline we are witnessing is the end of the road for a run higher that has been in place for months, or a temporary decline in the advance. 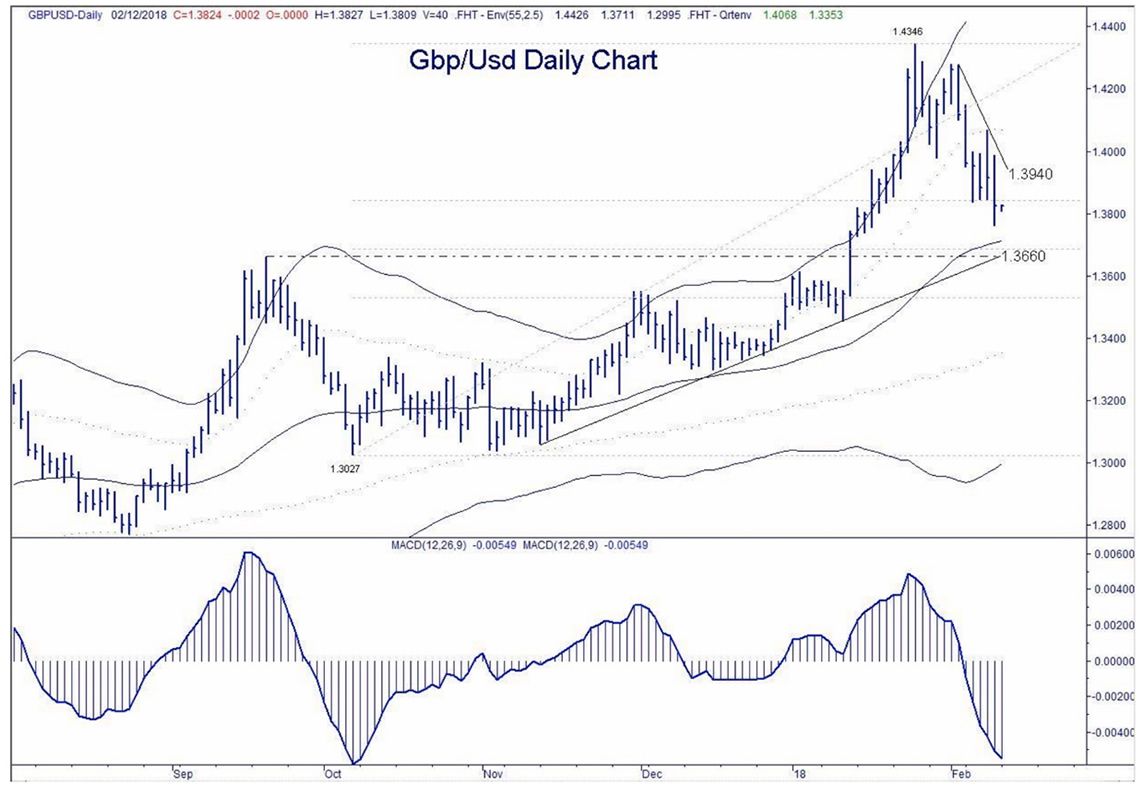 "Despite the sharp decline, it appears premature to expect the start of a major bearish reversal," says Leang.

But, the analyst argues the pullback could still take Sterling deeper.

The analyst notes this level is roughly about 50% retracement of the October to January rally and is also close to the rising trend-line support as well as the peak in Sep 2017 (see chart above).

According to Leang, a clear break below this major support would suggest that the 1.4346 high is a more significant top than currently expected.

"Regardless, GBP is expected to continue to stay under pressure in the coming days unless it can move and stay above 1.3940 (key short-term resistance previously at 1.4100)."