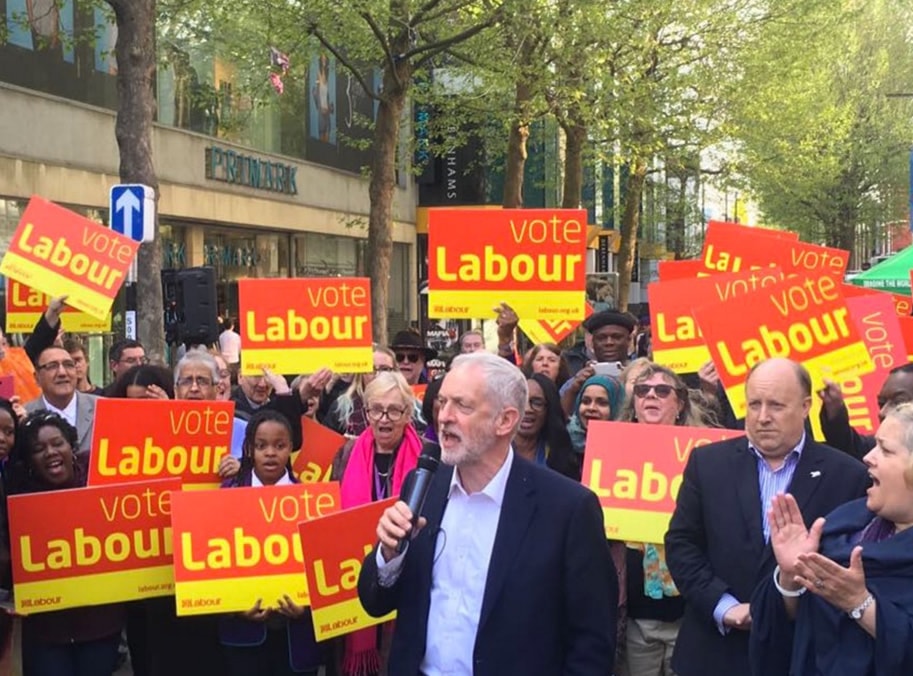 Selling pressure on Pound Sterling has intensified as traders get to grips with the latest political developments in the UK.

The Conservative party has seen their once-commanding lead slashed to a mere 5% in the latest YouGov poll and markets are quickly considering a future of coalition government, or indeed, outright Labour rule.

GBP is understandably not liking the news and is seen deep in the red against most global currencies as yet even more uncertainty is introduced into the outlook.

YouGov's latest poll shows that the Conservative party now has a 5% lead on Labour which continues to surge higher in popularity. 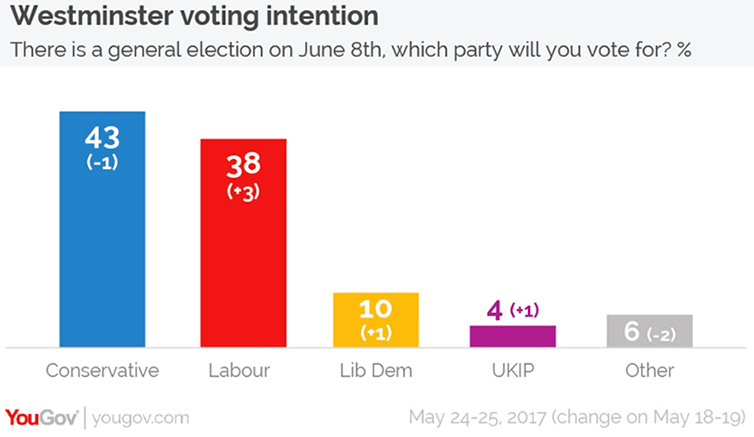 If this swing were replicated across the country then Theresa May's majority would be slashed to just two. If current trends continue into polling day Jeremy Corbyn will be in office and the UK will be looking at an unprecendented programme of nationalisations and increased public spending.

The idea was that a strong Conservative win in the upcoming General Election will boost the Pound has been prevalent ever since Sterling rallied in the wake of Theresa May’s call for a snap election back in April.

A strong majority will grant May flexibility and allow for a benign transition period once Brexit negotiations complete.

For a week now the Conservative’s lead in the polls have narrowed, and we reflected that this could explain much of Sterling’s recent late-May underperformance.

What is for sure is that Sterling hates uncertainty and that the UK is looking increasingly inclined to vote Labour introduces bucket-loads of this cryptonite for the Pound.

"GBP is back under selling pressure as pre-election polls show a narrowing gap between PM May’s Conservative party and the Labour party. To the extent to which GBP longs were built on the basis of an anticipated large Conservative majority and a lower probability of a cliff-edge Brexit, the rationale is now being questioned ahead of the 8 June vote. EUR/GBP likely to break through the 0.8700 resistance today," says Petr Krpata at ING Bank N.V in London.

That said, some caution might be warranted at this stage.

"Such a polling bounce for Labour was also eminently predictable (a similar occurrence took place for the Conservatives in the 1997 election, and we know how that turned out), so we should see some cable buying as the session goes on," points out Chris Beauchamp, Chief Market Analyst at IG.

Is this the blip needed to energise and focus Conservative voters and the party itself?

Potential Election Outcomes their Impacts on the Pound

Of course the Conservatives could regain their advantage, but what currency markets are now looking at are an array of possibilities.

And this introduces many interesting outcomes for Sterling.

Surely should the Conservative’s claw their lead back the Pound will rise?

“A narrative that sterling will rally on a landslide Tory win at the upcoming UK General Election may be a bit simplistic – especially after the recent short positioning adjustment,” says Viraj Patel, another analyst with ING Bank N.V who has drawn up a cheat-sheet for Sterling on the potential election outcomes.

For Patel, “assuming the polls are right and the Tories win, it is what happens next – and Mrs. May's initial post-election steps – that matters more for the Pound.”

ING have come up with a detailed matrix of possibilities which the Pound might take on a various set of outcomes in the election. 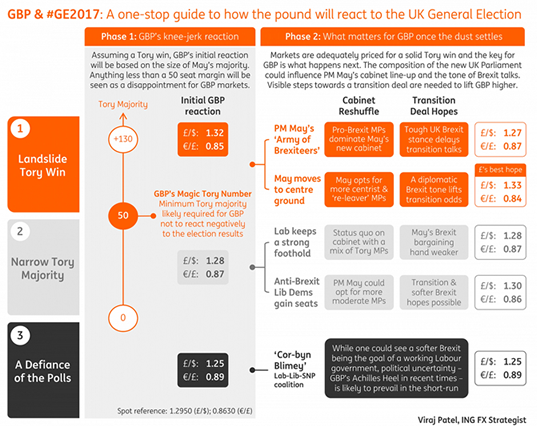 The graphic shows how ING think GBP could be affected by the outcome of the election.

“The emphasis is on the second stage; both a cabinet reshuffle (likely within a few days of the election result) and the UK's stance on a Brexit transition deal will give GBP markets greater directional steer,” says Patel.

“A working Tory majority of anything less than 50 would be seen as an outright disappointment for GBP markets. Our estimate is slightly conservative (no pun intended) given that the Electoral Calculus predicts a Tory majority of 142 based on the latest opinion polls, while the average probability of a Tory majority of more than 50 is around 75-80% based on betting market odds.”

Even if PM May wins big

“A scenario exists where GBP could fall after a knee-jerk move higher – especially if a 'hard' Brexit line is formally adopted and there is evidence of political stalemate in early Brexit negotiations. Without a transition deal agreed, the passage of time is GBP negative – it pushes us closer towards the cliff-edge and this would see markets grow nervously impatient.”

“The election run-in so far has been a catalyst for markets to return to a more ‘neutral’ Brexit level – where the probabilities of a hard versus soft Brexit are slightly more evenly distributed. Hopes of a more orderly transition process have partly underpinned this sentiment. Still, the UK election is no guarantee that a transition deal will be signed, sealed and delivered – it is merely an assumption that markets are making based on logistical factors.”

ING argue A more conciliatory Brexit tone from the Prime Minister would be seen as a step in the right direction – “and offers GBP’s best hope”.

“But we reiterate that it does take two to tango – and we still need to see whether the EU will be willing to offer a cost-free and painless transition,” says Patel.

Note that assumptions are now shifting and with the polls looking increasingly tight a strong Conservative victory could actually see a relief rally higher in Sterling to previous levels as markets reset to previously-held assumptions.

What would happen to GBP if Corbyn Wins?

“We think a Lab-Lib-SNP coalition risks having a Marmite effect on markets: either they’ll ‘love it or hate it’. On the one hand, a softer Brexit could be the goal of a Labour-led coalition government; but on the other hand, it raises political uncertainty – which has proven to be GBP’s Kryptonite over the past year,” says Patel.

In the short-term, ING would expect the uncertainty factor to prevail.

“The bottom line is that GBP risks from the General Election look asymmetrically skewed to the downside – there is now more to lose than gain,” says the analyst.

This is clearly a shifting picture and the only real certainty we now have is that uncertainty is set to plague the UK once more.

And the Pound hates uncertainty.

"The worrying thing for Mrs May and all those hoping for a large Conservative majority to help smooth the Brexit process is that the momentum is very much with Labour who are now enjoying their highest level of support since October 2014!" says Jonathon Pryor at Investec in London.

Narrowing polls have caught out speculators who had most bullish bets on Sterling in a year #GBP pic.twitter.com/rtoEHnfdx7

Watch Next Tranche of Polling Results

Some caution might be warranted at this stage as there is the possibility that we are looking at floor for falling Conservative support, something that YouGov suggested in their now infamous poll.

And we do have historical precedent to rely on.

"Such a polling bounce for Labour was also eminently predictable (a similar occurrence took place for the Conservatives in the 1997 election, and we know how that turned out), so we should see some cable buying as the session goes on," points out Chris Beauchamp, Chief Market Analyst at IG.

Is this the blip needed to energise and focus Conservative voters and the party itself?

We will continue to watch the polls, note that the weekend will have a slew of findings coming out for the Sunday papers.

If the Conservatives can show this is a blip we would expect Sterling to stabilise - not necessarily recover fully - when trading commences on the following week.