> RBC Capital Markets bet on a Pound Sterling fall towards 1.15 against the Dollar as markets fade the general election trade that price in a large Conservative Party win

> Analysts warn the Pound to Euro exchange rate won’t get back above 1.20 over the next 18 months 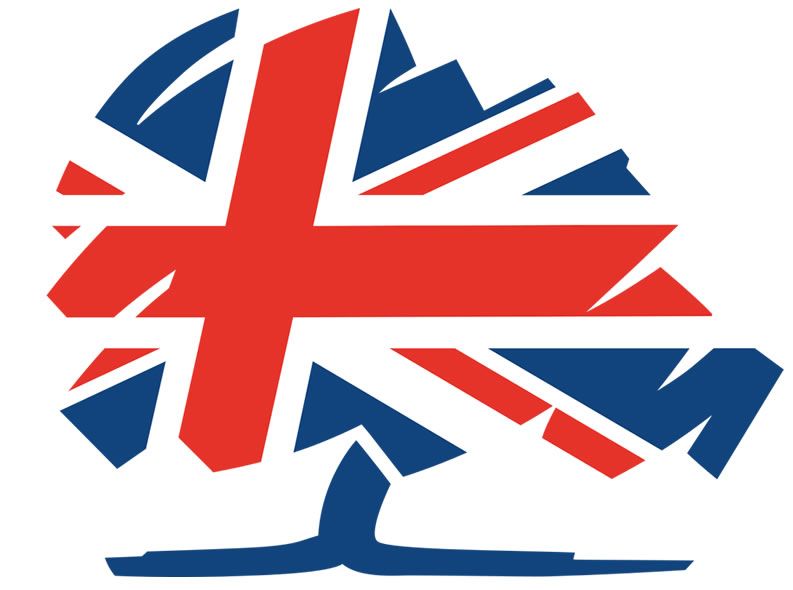 Since April 18, the day Prime Minister May called an early general election, GBP has been the best-performing currency in G10.

The currency has risen over recent weeks as markets price a Conservative majority of about 130-150 in the June 8 election which offers the UK the prospect of a period of prolonged domestic stability while fractious negotiations with the European Union are conducted.

But for Sterling the good times might be drawing to a close.

We are told by one leading global financial services institution that the premium of this expected Conservative win has been nearly fully priced and a ‘partial decline’ is now likely.

Analysts at RBC Capital Markets have written to clients saying that going forward, “it is easier to make a case for that premium partially unwinding than for it to rise further.”

The premium being referred to here is the boost to Sterling realised from Theresa May’s call for a general election and the assumption that she will secure a commanding majority in parliament.

The Pound has was seen rising to a high of 1.20 against the Euro in April while against the US Dollar we saw gains towards 1.30. It has however since hit a ceiling as markets begin to question what is around the corner.

While still looking positive on the charts and technical studies suggesting further gains are likely, there is also a niggling feeling in some quarters that the currency’s good run will be severely questioned over coming weeks and months.

Historically, the Pound tends to rally on Conservative wins: "surprise" Conservative victories (1992 and 2015) have seen large and sustained GBP gains (measured against a 50/50 basket of USD and EUR or DEM in the table). 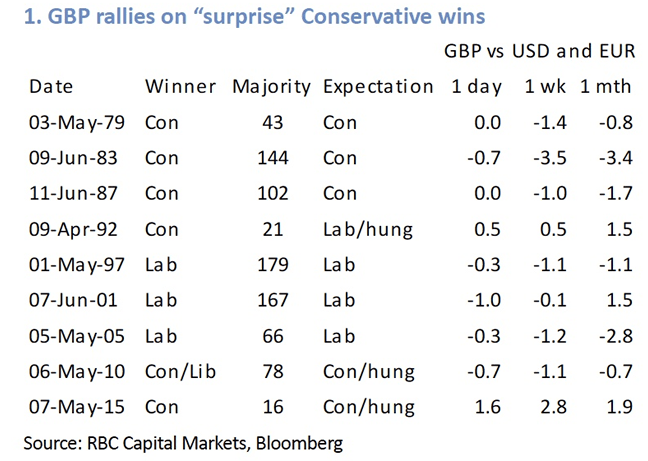 But, it is also notable, however, that there is no evidence that GBP strengthens after Conservative victories that were anticipated (it fell sharply after the 1979, 1983, and 1987 elections, for example).

With Sterling having rallied of late, RBC Capital believe markets have shown that the surprise is not (or won’t be) the Conservative victory itself, but the timing of the election and GBP’s rally over the last four weeks is arguably equivalent to the price action after the elections in 1992 and 2015.

Where does that leave the risks for GBP in the remaining four weeks of the campaign?

The Pound’s Value is Forecasting a Large Conservative Majority

Analysts at RBC Capital have conducted their research into Sterling on the basis of recent voting intentions polls, the Conservatives have increased their share of the vote by 9.5% points and two-thirds of this is due to diminishing support for UKIP (-6.3% points).

Labour support is down 2.3% points. On this basis, there is little that doubt markets are priced for a landslide Conservative election victory. 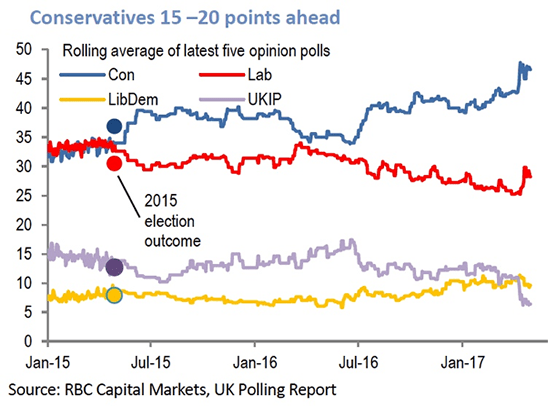 It is noted that the UK’s “first past the post” electoral system and multi-party politics mean it is not straightforward translating shares of the vote into likely parliamentary seats, but analysts argue we can get a good idea of what markets expect on June 8 in two ways.

This outcome would give the Conservatives a majority of 132 seats—not dissimilar to the landslide Conservative victory of 1983 or Labour landslides in 1997 and 2001.

Alternatively, RBC Capital say we can use prices quoted by UK bookmakers (Sporting Index Ltd.) on the number of seats each party will win.

“As we noted ahead of the EU referendum, these prices incorporate not just the latest polling data but also expectations of what might change between now and the election, any implied view on polling error, and all other available information,” says analyst Adam Cole at RBC Capital’s London branch.

On this measure, June’s election is expected to leave the Conservatives with 398 seats, Labour with 157, and the LibDems with 18. This implies a Conservative majority of 147 seats, which is somewhat higher than implied by recent polls.

Combining the information above, RBC Capital Markets say it seems reasonable to assume that markets currently have an embedded expectation of a Conservative majority of somewhere between 130 and 150 seats.

“For a number of reasons, however, we think the balance of risks is that GBP surrenders some of the gains it has made since the election was called,” says Cole.

The analyst argues markets appear to be priced for a Conservative majority at the top end of the range of expectations (some academic forecasters have the majority as low as 90).

This might disappoint markets which would then react by selling Sterling.

Indeed, the Conservatives require ever-larger swings in the voting share for the implied majority to continue rising going forward.

The chart shows how the implied Conservative majority changes if they gain or lose incremental 1% point shares to/from either Labour or UKIP. From the current position, gaining 1% point from Labour adds 18 seats to the implied majority, but losing 1% point reduces the majority by 25 seats. 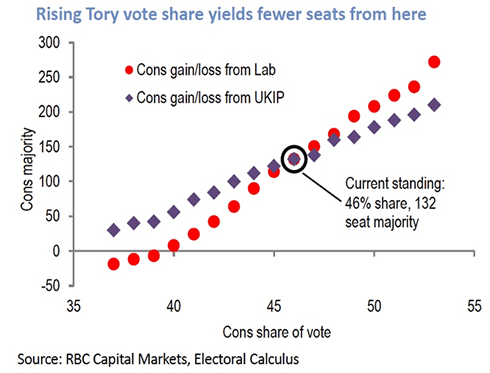 Latest polls released over the weekend suggest that the Labour party is in fact making gains with two new polls putting the opposition on 32%.

The Opinium and ORB polls confirm this is higher than the vote share Labour received in the 2015 general election, when Ed Miliband won over 30.4 per cent of voters.

How the election affects GBP in the longer term will depend principally on three factors argue RBC Capital:

1. how it affects the EU exit process and terms on which the UK leaves;

2. how it changes the prospect for and possible outcome of a second Scottish independence referendum; and

On balance the risks are to the downside argues Cole and his team.

Averaged against USD and EUR, GBP is up close to 2% since May announced the early election.

“Going forward, it is easier to make a case for that premium partially unwinding than for it to rise further,” says Cole. “With short-dated GBP/USD vol close to an 18-month low and risk reversals at an 18-month low premium for puts, the market appears to be priced for the opposite.”

As such, RBC Capital are betting on a decline in Sterling against the Dollar using options.

“In this context, we also note the steady ongoing deterioration in UK fundamentals, which has taken a back seat to politics over the last month. Activity data continue to surprise to the downside and the consensus 2017 growth has fallen in May after nine months of uninterrupted upgrades,” says Cole.

“Nine months after GBP’s collapse, historical experience would suggest that the opposite should be happening. That the export recovery is not happening is one of the core reasons we maintain a GBP-negative medium-term view,” says Cole.

RBC Capital are forecasting the Pound to Dollar exchange rate down to 1.19 by the end of September 2017 ahead of a fall to 1.15 by year-end.