Once upon a time, Pound Sterling was the global reserve currency with 60% of world trading being settled in the currency at one point.

However, since the first world war, the currency's importance as the currency used to finance international trade and fill central bank coffers has steadily waned.

It appears that the trend has accelerated of late.

New research shows Sterling has seen a rapid loss stature amongst the world’s reserve currencies thanks to its notable dive in value since the EU referendum.

And, according to the research conducted by Deutsche Bank, Pound Sterling might not be able to regain lost status.

Central banks stock currencies to which their own currencies are most susceptible via trade and capital flows.

“These are calculated as the betas of each global currency to the reserve currencies - USD, EUR, and GBP - multiplied by the relative sizes of the respective economies,” notes Robin Winkle, a strategist with Deutsche Bank in London.

This model currently allocates 47% to the dollar.

“Combined with America’s 16% share in the global economy, this exactly matches the Dollar’s 63% share in COFER reserves,” says Winkler.

“Despite the Dollar's decline and the shrinking share of the US economy, the Dollar zone still accounts for more than half of the global economy. In countries whose currencies are more stable against the Dollar than against the Euro, a reserve composition that favours the Dollar produces more stable returns in terms of the domestic currency.” - Bank for International Settlements on the Dollar zone.

For the Euro, the model is equally precise in predicting the 20% COFER share.

The Pound is however seeing its already shrunken share diminish.

Therefore, the ~11.73% decline in the GBP/USD exchange rate over the course of the last year will certainly explain the Pound’s diminished stature as a global reserve currency. 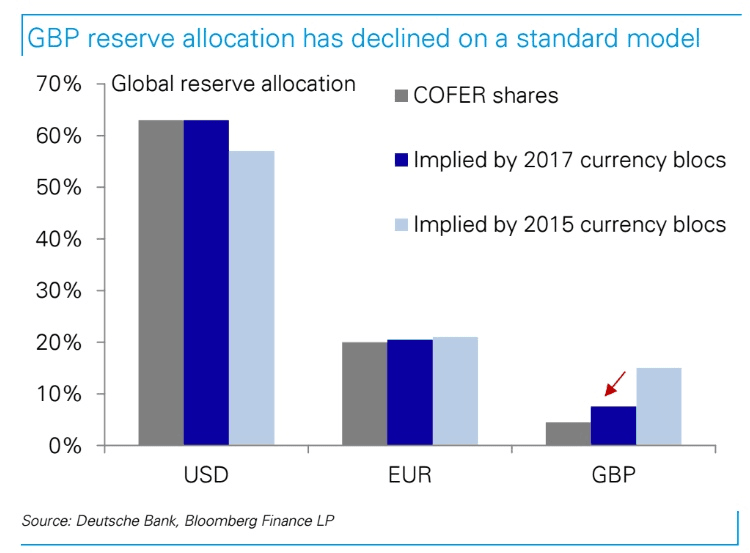 China Slimming Down on Exposue

Deutsche Bank have run the aforementioned model dynamically and have noted that the Sterling bloc has halved in size since early 2015.

“Is that already reflected in actual allocations? At first sight, the stable COFER share suggests no. But the fact that China only started to report allocations over that period may have masked a drastic slimming in their former pound overweight,” says Winkler. 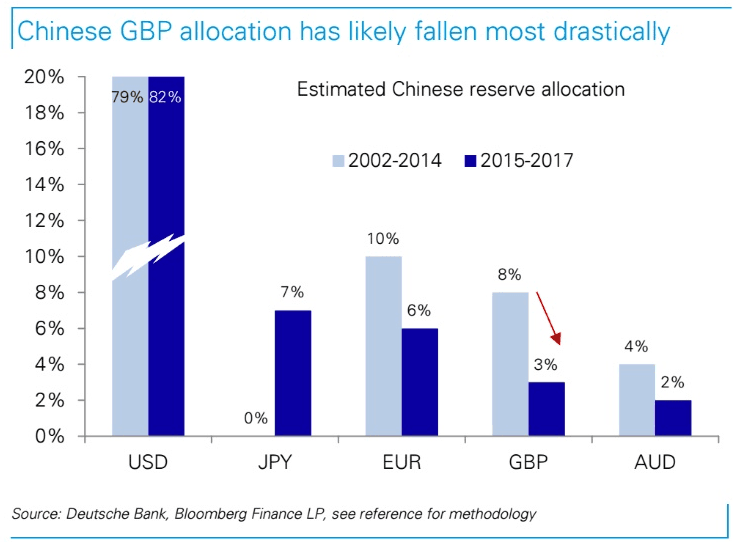 In a model of China’s currency allocation Deutsche Bank estimate that the Pound’s share has likely fallen from close to 10% into low single digits since early 2015, consistent with the PBoC transitioning from wealth to currency management.

“The Pound may offer value but is increasingly irrelevant,” says Winkler.

The Pound’s place in international finance has been in decline since the 1930s when it was the world’s reserve currency and largest currency zone.

And, the gradual decline in size of the Sterling zone is likely to continue argue Deutsche Bank.

“Foreign investors have returned to the UK gilt market over the past quarter as valuations are attractive in Dollar terms. Yet although this may have involved some recycling of petrodollars, we are skeptical that sterling will benefit from a broader reallocation of EM currency reserves managed by central banks,” says Winkler.

“To the extent that reserves serve as backstops against currency stress, rather than as sovereign wealth, the pound’s diminishing role in international capital flows post-Brexit should permanently reduce its reserve status,” adds the analyst.

When Sterling Ruled the World

The following extracts from Catherin Schenk's book, The Decline of Sterling: Managing the Retreat of an International Currency are fascinating:

The British Pound has outshone the Euro and a host of other major currencies on news of progress in post-Brexit trade negotiations.