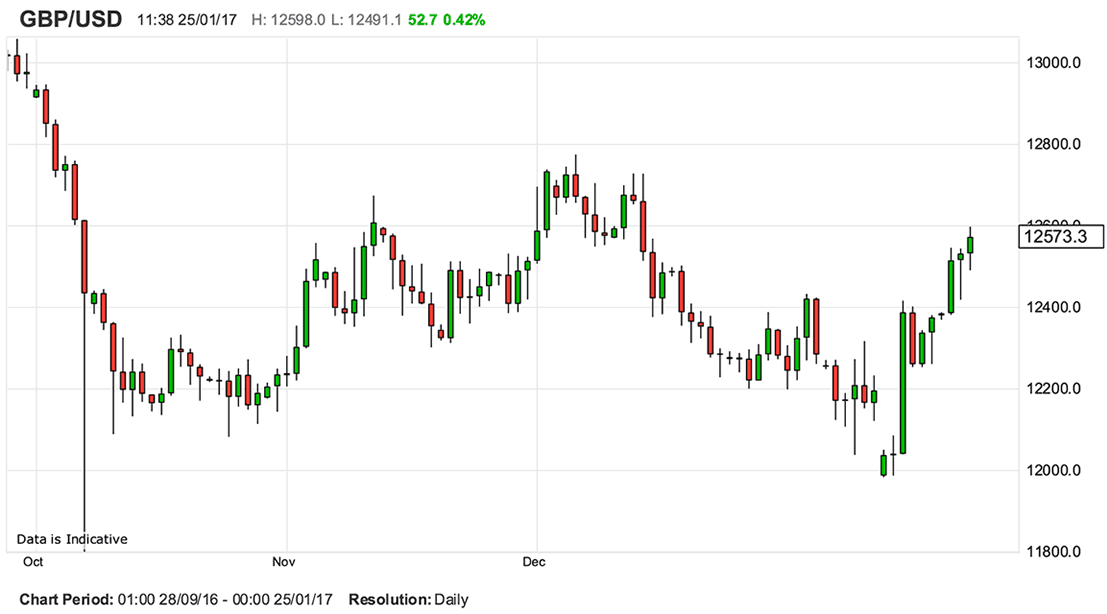 Pound Sterling retains a firm bias on global foreign exchange markets as global investors adopt a more benign stance towards the country now that the path towards Brexit is a little clearer.

Gains are also coming against other G10 majors with large gains seen against the Australian Dollar in particular.

“Sterling traders are chancing their arms that we’re going to get some concrete strategy that will ensure UK plc remains a solid investment. Record high demand for long-dated UK gilts at an auction for 40-year paper yesterday does support this optimism,” says Neil Wilson at ETX Capital in London.

"Foreign investors have returned to the UK gilt market over the past quarter as valuations are attractive in Dollar terms," says Robin Winkler at Deutsche Bank.

The movement in Gilt yields often tends to move currencies - particularly if the yield offered by one country is growing at a faster pace than the country it is being compared to.

When we look at the United States we see yields are not enjoying the same lift as are UK yields - this provides some upside to GBP/USD.

The same can be said when UK long-date yields are compared to German counterparts and this helps explain the moves higher in the GBP/EUR exchange rate.

"The bond market is driving currency trends, not the other way around, so if what we're seeing is a break in recent choppy trading and a revived bear market - personally, i think that's the case, driven by rising inflation, and triggered by the break higher in equities - it's significant," says Kit Juckes at Societe Generale. "The bond market which has appeared most mis-priced is the UK Gilt market."

"To my eyes, yields are breaking out of their downward channel," says Juckes. "The more these support the break higher in yields, the less they help sterling bears. GBP/USD is up in rather thin air here, but needs a reason to fall back that we can't see yet."

Trump Weighs on US Dollar

The reason the Dollar and US yields are subdued is because markets continue the process of assessing the first days of Donald Trump’s presidency and how it will affect the US economic outlook.

So far, the Dollar has little room to move higher as no fresh details on Trump’s spending plans have been revealed.

“The upside risk in cable has to be considered, especially if The Donald disappoints. Therefore, further Dollar weakness could provide some substantial upside to the pair,” says Arnaud Masset at Swissquote Bank.

With regards to the Dollar's outlook it is also worth noting a peculiar paradigm that tends to dictate Dollar movements when a new President takes the helm in the US.

"In a typical Republican presidency, there is always a strong burst of growth rally pushing up the prices, but the rally usually only lasts 6 weeks before it slumps down. However, with Trump it would be even lesser than the 6 weeks as he seems to be now moving towards assessing his protectionist policies," says Mihir Kapadia, CEO and Founder of Sun Global Investments.

Markets still continue to be cautious as they await any concrete evidence on his plans forward.

His pro-growth campaign-trail assertions helped drive a rally equities and the dollar upward since November, while bonds slumped.

"Investors are worried that prices have been pushed forward too far and too fast. This uncertainty has led to the dollar being sold off aggressively," says Kapadia.