After one of the worst years in its history, the British Pound could make a comeback in 2017 according to Nordea Market’s FX Strategist Aurelija Augulyte.

“2016 was a disaster for the GBP, as the unexpected Brexit vote knocked it off most since the Lehman crisis,

"Next year it will stage a comeback," says Augulyte in a recent briefing to clients.

The Pound fell to multi-year lows against both the Euro and US Dollar amidst a free-fall in certainty and confidence in the wake of the UK's decision to exit the European Union.

The year ahead will be crucial for Sterling as it will start taking direction from the progression of Brexit negotiations.

Yet, Augulyte strikes a positive tone regarding the prospects for the UK currency on this front as she believes the worst is over.

In October the Pound was at its lowest as markets priced in a worst-case hard-Brexit scenario following Prime Minister Theresa May’s “Brexit means Brexit” speech at the Conservative Party conference.

These October lows should, however form a baseline says Augulyte.

With talk of parliamentary involvement in the Brexit process and creative thinking in relation to transitional arrangements amongst senior Government leaders the prospect of a soft rather than hard-Brexit now looks likely.

Nordea's analyst also sees increasing political risk in the Eurozone – and Trumpomania - as overshadowing Brexit uncertainty in 2017, which will in all probability become ‘old news’.

“Now that the hard-Brexit has become a market’s baseline, should we shift towards a softer form of Brexit – avoiding an exit “cliff” with a transition agreement – the markets will be relieved. It could happen as PM May will deliver the Brexit plan before actually triggering Article 50,” says the strategist.

But what of the Pound’s other shibboleths?

Projections of lower growth in 2017 are overdone claims Augulyte, since they do not take into account a strong housing market:

“The Bank of England (BoE) has multiple times repeated that the GBP weakness is partly due to worsening economic prospects after the Brexit referendum.

“However, so far the economy has been resilient.

“While industrial production has disappointed, the leading indicators for exports and production are positive.

“Also, the housing market collapse is likely to be averted, as some leading indicators suggest an upturn as early as in H1 2017.

“Should it materialize, instead of the current consensus forecast of 1.1% growth in GDP in 2017, we will see growth above 1.5%,” says Augulyte. 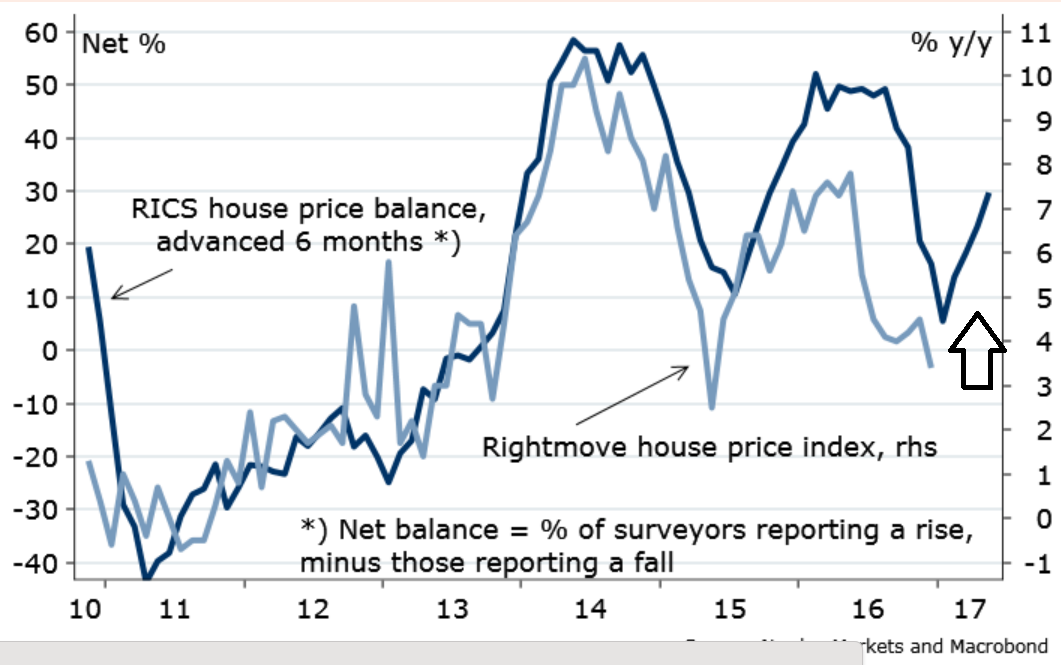 Nordea's call comes as other analysts raise their forecasts for the UK economy for 2017 owing to the strong tailwinds provided by 2016's performance.

Augulyte even thinks there is an outside chance of the Bank of England (BOE) raising interest rates.

After all, the Bank’s current position has shifted to ‘neutral’ and could go up or down, according to the BOE themselves.

Governor Mark Carney has also said he will not tolerate an excessive inflation “overshoot” therefore rising inflation may lead Carney and the MPC to raise interest rates to defend the pound.

In addition, since the BOE tends to eventually copy the Fed, there is a chance now that they will likewise raise interest rates as the Fed have done, which would be positive for the Pound.

“The GBP has lost nearly 13% against a basket of currencies in 2016, marking one of the three largest annual falls in three decades. 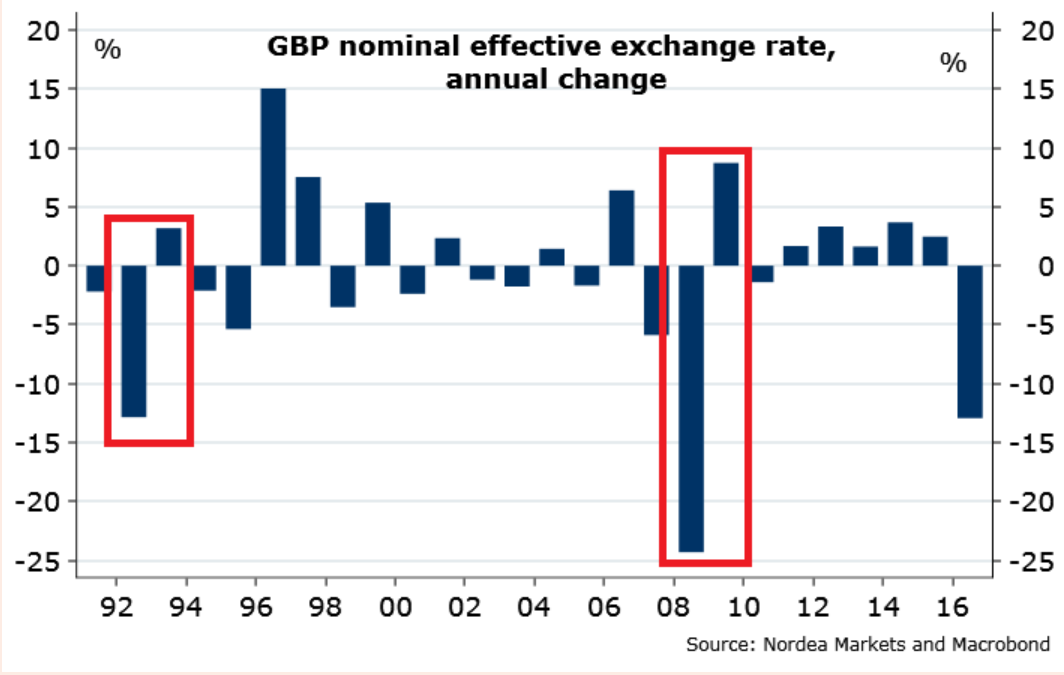 Above: The year after a bad year for the Pound the currency always rebounds higher.

“Notably, the first two were somewhat reversed in the following year – the “mean reversion” argument,” she notes.

The Pound is undervalued according to almost any metric you care to choose:

“Fundamentally, too, the GBP is now one of the most undervalued currencies among the G10.

“By some measures of PPP, it is more than 10% too cheap relative to the USD."

The Purchasing Power Parity (PPP) is a favoured way of calculating fair-value for a currency using a universal basket of everyday goods required by most people in the world.

The values should be the same for different countries when the exchange rate is factored out, assuming they are at fair value.

Whilst this measure of value is old fashioned and does not take into account the effect of global capital flows which in the modern global economy now dictate FX market moves so much, it is often employed, along with numerous others, by institutional investors.

“While it is nothing to dictate the direction in the next few weeks, surely, the valuation is a pull factor for many central banks and institutional long-term investors when rebalancing their portfolios,” says Augulyte.