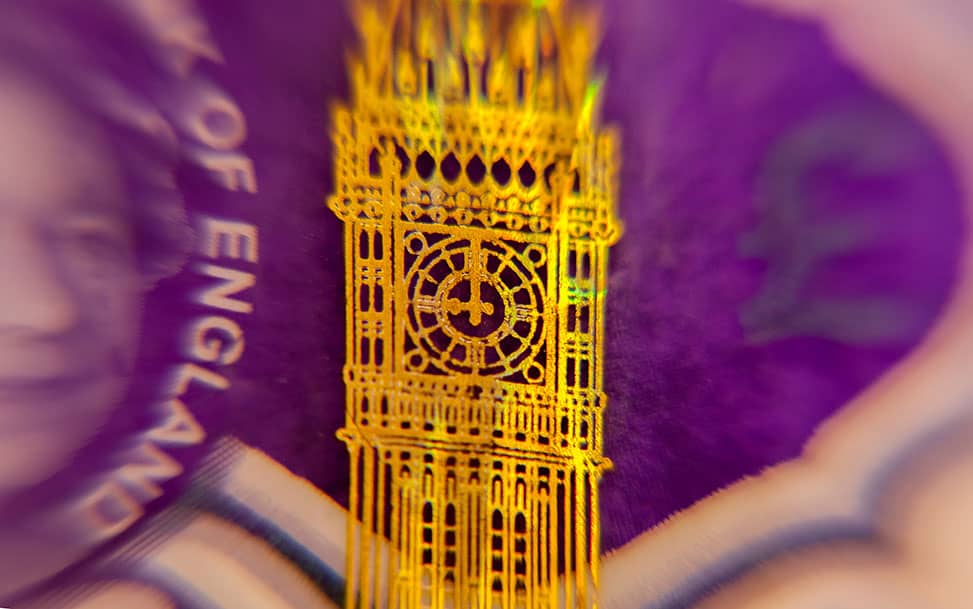 The British Pound was the best-performing major currency at the start of December and could deliver further gains, provided global investor sentiment remains upbeat into Christmas.

The UK currency advanced against its main peers as investors reacted to a midweek speech from U.S. Federal Reserve Chair Jerome Powell that validated expectations for a slowdown in the rate hiking cycle. 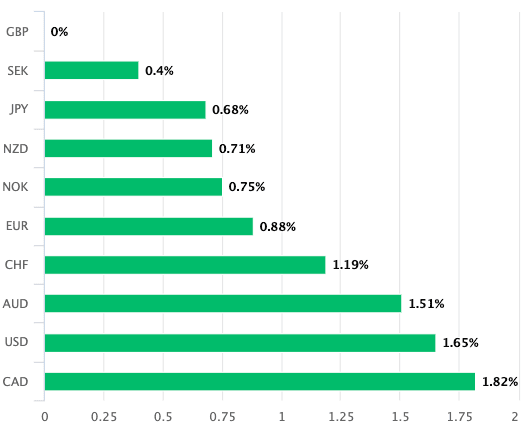 Powell confirmed that further interest rate rises were to be forthcoming as the Fed's task to get inflation back under control was far from complete.

He nevertheless ultimately validated a 50 basis point hike at this month's Fed policy update, which represents a slowdown from a string of 75bp hikes.

The Pound has followed global stocks lower through 2022 as the weight of Fed rate hikes weighed on sentiment and diminished the value of stocks.

This is because the UK runs a large current account deficit, meaning the Pound's value is sensitive to global investor flows and struggles when investors are nervous.

But when investors are confident more money finds its way into the UK, plugging the current account deficit and supporting Sterling.

High-beta simply means the Pound has a positive relationship to risk sentiment, as displayed by its close relationship with the U.S. S&P 500 stock index, which is often considered a benchmark of global investor sentiment: 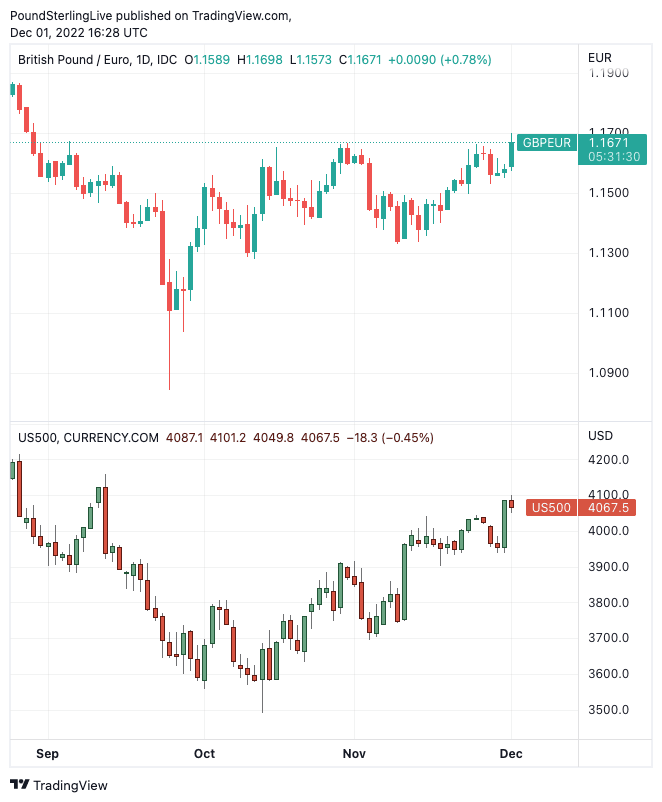 Gallo says he expects the Pound will continue to outperform the Euro on a relative basis and that a test of 0.8500 in EUR/GBP is possible. (In Pound to Euro exchange rate terms this would be 1.1765).

"The main upside risk to this trade being a sharp deterioration in risk appetite," says Gallo. "Provided the current market dynamic persists, we would look to take partial profit at the 200D MA (0.8539)."

(EUR/GBP at 0.8539 = GBP/EUR at 1.1710. If you are looking to protect or boost your international payment budget you could consider securing today's rate for use in the future, or set an order for your ideal rate when it is achieved, more information can be found here.).

Whether stocks and the Pound can continue rising will likely depend on how investors' sentiment fares, which in turn could depend on how the Federal Reserve reacts to recent market developments.

Powell said nothing new in a speech delivered to the Brookings Institution on Wednesday, but the financial context has changed since he last spoke in November: stocks have risen and - more importantly - the cost of finance has fallen in tandem with falling bond yields.

This is ultimately at odds with what the Fed is trying to achieve given they want money to be more expensive in order to cool the economy.

Powell therefore had the opportunity to push back against the current market landscape and deliver something 'hawkish' but chose not to.

"With many market participants expecting him to clearly push back against a pivot, the fact that he is now thinking about what happens to interest rates when they hit their terminal level and how high that level might be, may have been interpreted as a shift to a softer stance compared to that adopted at the press conference of the latest decision," says Charalampos Pissouros, Senior Investment Analyst at XM.com. 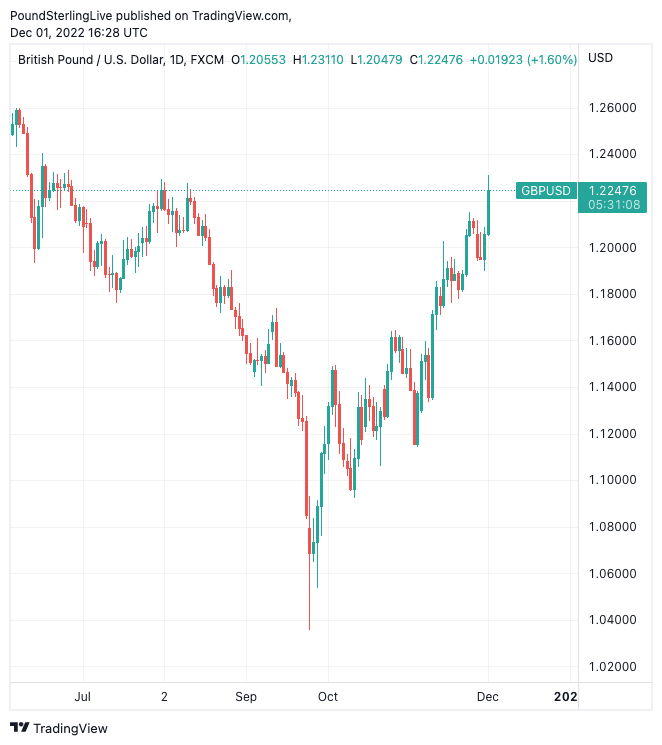 But there is more to the sentiment boost that is driving the Pound higher as news out of China confirms authorities are pursuing a more liberal approach to dealing with Covid, which raises the prospect of a more pronounced recovery in the world's second-largest economy.

Vice Premier Sun Chunlan is reported to have said on Thursday that China's fight against the pandemic is at a new stage as the Omicron variant is becoming less pathogenic and more people are getting vaccinated.

He opted to drop mention of the previous "dynamic zero-Covid" approach, which is incredibly draconian and responsible for a significant underperformance by the Chinese economy.

Reflective of this approach is news that Guangzhou, the coastal manufacturing hub, has lifted lockdowns making it a potential test case for a more liberal disease management regime.

As long as global investor sentiment continues to improve the Pound can remain supported, however, any reversal in fortunes would undermine recent gains.

And on this front, there is no shortage of analysts warning caution is needed.

"Central banks are moving into the final stretch of their interest hiking cycle, but economic uncertainty is high. Higher terminal rates could be warranted if financial conditions keep easing. We still think it is too early to celebrate," says Jan von Gerich, an economist at Nordea Bank.

The response to Powell's speech on Wednesday could therefore yet push the Fed into striking a more hawkish tone at some point in the coming weeks.

"We are a little nervous that the 7% fall in the dollar against the currencies of its main trading partners and the 45bp drop in the 10Y Treasury yield is leading to a significant loosening of financial conditions – the exact opposite of what the Fed wants to see as it battles inflation," reads a research note from U.S. bank Wells Fargo.

"We wouldn't be surprised to see the Fed language become even more aggressive," adds Wells Fargo.

The market is now fully priced for a 50 basis point hike on the occasion of the Fed's December 14 policy decision, with a further 50bp expected early in 2023.

The risk to the current improved mood amongst global investors is that another 50 basis points are added to the tally and dramatically raising the prospect of a more pronounced U.S. recession in 2023.

"The discussion of a full-scale bullish reversal remains premature," says XM.com's Pissouros. "Although weak US data add to the notion of a slower rate path hereafter, a damaged economy is far from a positive development for the stock market."

"We continue to think that the dollar rally will resume as 'safe-haven' demand intensifies in the coming months," adds Jonas Goltermann, Senior Markets Economist at Capital Economics.

Such a reversal of fortunes in risk sentiment would potentially lead to a rapid reversal in fortunes for Pound Sterling.

"We remain sceptical that the recent rally marks the start of a new market regime. The priority of the Fed is likely to remain the fight against inflation, pending a more consistent stream of softer prices and employment data. Against this backdrop, we favour adding to defensive assets in both equity and fixed-income markets," says Mark Haefele Chief Investment Officer, UBS Global Wealth Management.