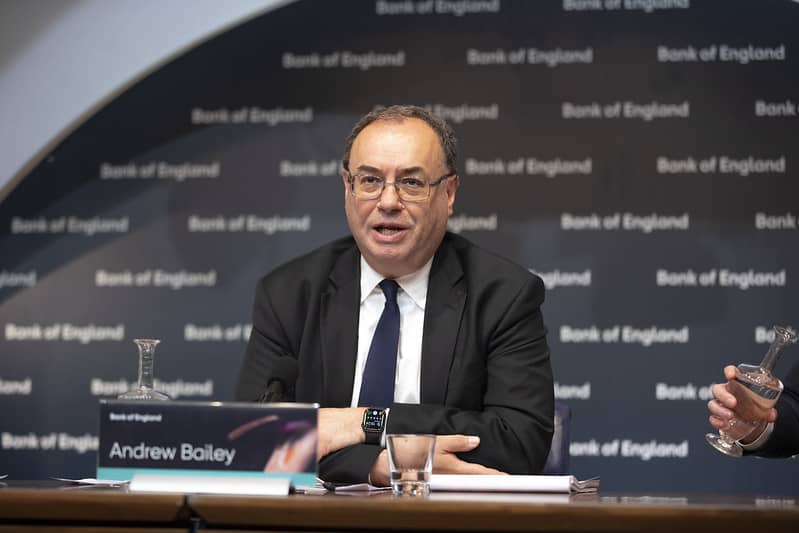 Economists warn that unless the Bank of England is bold and hikes by a large increment of at least 50 basis points the British Pound could fall further.

The Bank is set to raise interest rates at midday today and it is the size of that hike that will be of interest to currency markets with the default expectation of a 25 basis point rise now judged to be too timid.

This is largely for two reasons: 1) UK inflation is surging at 9.0% and is expected to hit double digits later in the year with risks to the upside, and 2) other central banks are raising rates by much greater margins.

Foreign exchange is a relative game and currencies belonging to central banks in the slow lane in the race to normalise interest rates would be expected to underperform those of central banks that show clear intent by hiking in 50bp and 75bp increments.

"Since the principal cause of the current inflation is rapidly rising dollar prices on global markets, the Bank of England has no choice but to defend sterling. It will therefore follow what it expects the Fed to do," says independent economist Frances Coppola.

The Federal Reserve hiked interest rates by 75bp on Wednesday night as it continues an aggressive policy of raising interest rates that has helped underpin the Dollar for some months now.

Therefore if Coppola is right a 75bp hike is highly possible as the Bank looks to ensure Sterling holds ground.

"Last time, it did not follow the Fed strongly enough, and sterling fell. So this time it must be more hawkish. I expect a BoE rate rise of at least 50 bps, probably more like 75 or 100," says Coppola.

The call comes as the Pound remains under pressure against the Euro and Dollar on global currency markets, this week falling to multi-year lows against both currencies.

A day ahead of the Bank of England announcement former governor Mark Carney said central banks need to 'front load' rate hikes, i.e. raise rates aggressively early on in the cycle to get inflation expectations under control.

"Central bankers need to catch up to their economies. They've been behind the curve, they’ve acknowledged this,” said Carney in an interview with Bloomberg TV. "They need to start to get interest rates above inflation effectively, or at least inflation expectations."

This chimes with what some members of the Bank of England's MPC have argued for at various points, most notably Catherine Mann and Michael Saunders.

But the MPC as a whole has historically proven particularly dovish with members typically voting to either keep rates unchanged or for the smallest possible incremental increases.

At the occasion of the May policy update the 25bp hike was accompanied by a decidedly downbeat assessment of the future that suggested the Bank was uncomfortable with hiking rates by as much as the market was expecting given it feared economic growth was due to fall in coming months.

Above: GBP/EUR at daily intervals.

"Currently, the UK has only witnessed one month of expansion this year, namely 0.7% in January," says Jeremy Stretch, a foreign exchange strategist with CIBC Capital Markets.

"As the UK appears on course for a technical recession by the end of summer, the BoE will find it increasingly uncomfortable to hike beyond August," he adds.

If he is right and the Bank signals the hiking cycle is drawing to a close the Pound would likely be subjected to further weakness as the policy divergence with other central banks grows into a yawning gap.

CIBC Capital Markets are targeting a weaker Pound against the Euro, saying they see EUR/GBP rising towards 0.8850, (a Pound to Euro rate of 1.13).

Kamal Sharma, FX strategist at Bank of America, maintains a dovish stance towards Sterling believing the challenging Bank of England communication backdrop and deteriorating UK macro data will define the currency's performance over the coming months.

"We do not think that the GBP will be able to extract much juice from a further pivot in UK rates," he says. 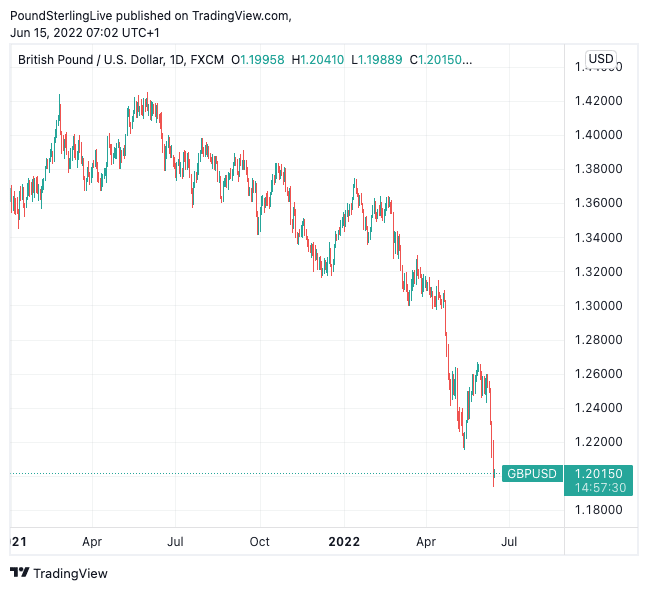 John Hardy at Saxo Bank says the market is about 50/50 on whether the Bank of England goes 25bp or 50bp at this week’s meeting, "but surely has to bite the bullet with sterling at these levels and go with the bigger move?"

'Doves' on the Bank of England's MPC would argue an expected slowdown in UK economic growth will inevitably constrain inflation in the future and therefore raising interest rates would unnecessarily harm the country's growth prospects.

Critics of this stance suggest it is at odds with the Bank's core function to provide price stability through the zealous targeting of 2.0% inflation.

But concerns for future economic activity nevertheless explains why it tends to tread cautiously when raising interest rates.

Sid Muralidhar, an economist at Citi, is expecting another 'dovish' hike on Thursday.

"The BoE faces one of the most challenging macro backdrop of rising inflation and sharply slowing growth. While the markets are pricing in 39bps for the June meeting, we think the BoE will opt for a 25bps rate increase, in line with our European economics team," he says.

Such a decision would represent a measured approach to balance inflation and growth risks.

"We still think market pricing for the BoE is aggressive given the strong fundamental headwinds and thus, remain bearish on GBP," adds Muralidhar.

Vasileios Gkionakis, Head of European FX Strategy at Citi, says the Euro will "gravitate higher" against the Pound as real yield differentials remain supportive of the Euro.

Stephen Gallo, Head of European FX Strategy at BMO Capital Markets, says a relatively slow pace of Bank Rate hikes is not a positive factor for the Pound.

And in the event the Bank does go ahead with a bigger than expected hike any strength in Sterling would likely be short-lived anyway he says.

"We're also inclined to fade instances of GBP appreciation triggered by the BoE front loading tightening at the June policy announcement (i.e. lifting the base rate by more than 25bps)," says Gallo.

This is because the economy is expected to act as drag on the Pound, regardless of what the Bank does.

"If the constraints on the ability of the BoE to tighten result in the UK experiencing persistently high inflation relative to its DM peers, or a type of wage price spiral, this backdrop could also act as a drag on GBP appreciation (a wage price spiral would almost certainly translate into a deeper slowdown in activity later this year or in 2023)," says Gallo.

BMO Capital Markets say there is more concrete technical evidence that 0.8500 in EUR/GBP is becoming the new base in that currency pair.

Gallo would meanwhile use any rally in GBP/USD on a larger-than-expected rate hike as an opportunity to fade GBP strength.