The British Pound hit its stride heading into the midweek session recording strong advances against the Dollar, Euro and all other major currencies but with no news behind the move there is a risk gains are unwound over coming hours.

Indeed, at the time of writing the stellar run of gains witnessed over the past 24 hours has begun to unravel confirming there to be little fundamental driver in the market at present.

The Pound has pared most of its recent gains and is now two-thirds of a percent down against the Euro and a half percent lower against the Dollar.

The Euro's outsized move can perhaps be explained by market positioning ahead of Thursday's highly anticipated meeting of the European Central Bank, which we explore in a little more detail further down in this article.

The Dollar is meanwhile advancing alongside a decline in global equity markets which confirms global risk sentiment remains a key feature of the current FX landscape.

We note all the major European indices have followed Asia lower and the U.S. market is set for a weak open.

"When the global economy is slowing meaningfully, the USD strengthens. Clearly, this relates to the USD’s safe haven status," says Daragh Maher, Head of Research, Americas, at HSBC.

The losses form part of what is shaping up to be a rather volatile and directionless week for the Pound.

Sterling had shot higher against its peers on Tuesday with some analysts citing a significant upward revision to May's PMI survey data as behind the move: the Composite PMI for May read at 53.1, which was far above the initial estimate of 51.8.

"The demand for the pound stemmed from the better-than-expected S&P services PMI coming in at 53.4 in May. Whilst the figures were better than forecast, the data does show economic growth concerns are rising albeit at a slower pace," says Thanim Islam, Market Strategist at Equals Money.

A look at the dashboard shows a clear outperformance through Tuesday and into Wednesday by Sterling which is suggestive of some genuine idiosyncratic demand for the UK currency: 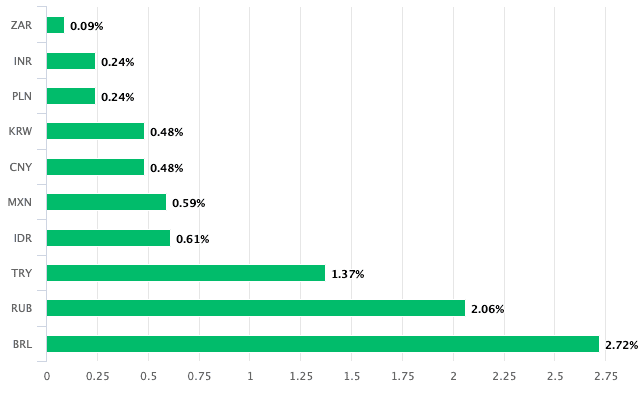 In fact it was not just in the G10 space that Sterling outperformed as gains were also recorded against some major Asian, emerging market and Eastern European names: 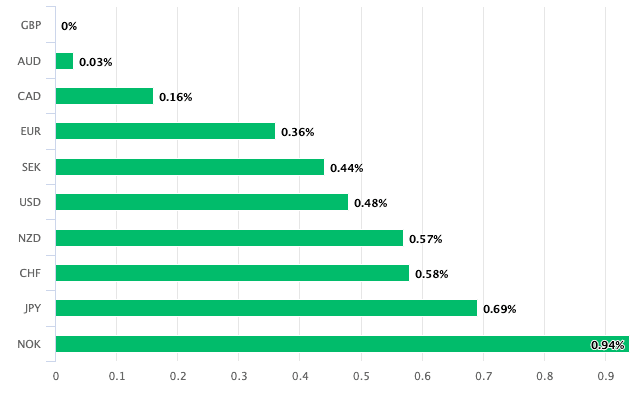 The broad based nature of the advance therefore can't be explained away by broader risk trends as there are some currencies in the above basket that would almost certainly advance against Sterling if global sentiment were in the driving seat.

Gains came amidst a dearth of top-tier event risk for the Pound, although it did witness some volatility over Monday and Tuesday as global stock markets fluctuated and political intrigue was on offer in the form of a confidence vote in Prime Minister Boris Johnson.

"The no-confidence vote may have been a big issue politically but as far as the markets are concerned it doesn't seem to have made a ripple. GBP’s trade-weighted index is virtually unchanged," says Marshall Gittler, Head of Investment Research at BDSwiss Holding Ltd. 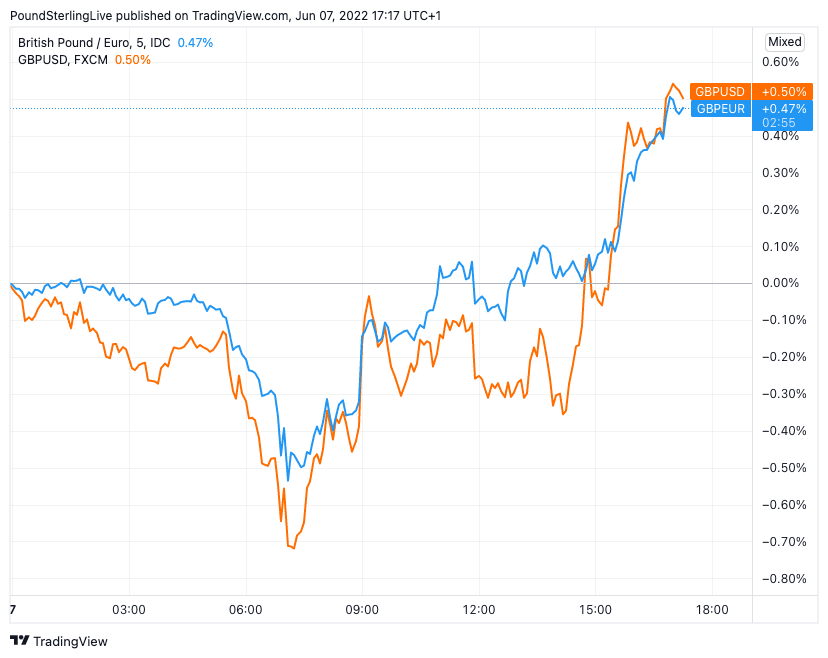 Above: Change in value of GBP/EUR (blue) and GBP/USD (orange) over the past 24 hours.

The Pound could nevertheless come under pressure against the Euro on Thursday if the ECB signals a July rate hike of 25 basis points will take place in July while also validating market expectations for a potential further 75 basis points of hikes over the remainder of the year.

"The ECB’s Governing Council is very likely to communicate the end of net asset purchases next month as well as rate hikes in July and September. It will also likely signal that further normalisation is likely beyond that," says economist Nick Kounis at ABN AMRO.

Such moves are now largely expected by investors and should therefore not offer too much volatility for the Euro.

However currency analysts are watching for any signal the ECB could 'go big' and hike by 50 basis points at one of the upcoming meetings, believing that a more conventional 25 basis point hike is not enough given the scale of Eurozone inflation.

This could light a fire under the Euro and push the GBP/EUR exchange rate lower into the weekend.

The Bank of England will then draw focus on June 16 when it likely delivers another 25 basis point interest rate hike.

But the rate hike comes amidst surging UK inflation rates and a slowing economy, contradictory forces that do not necessarily offer a supportive combination for the Pound.

"A bigger issue for UK financial markets at the moment is the country’s move in the direction of stagflation. This will keep UK real yields deeply negative and means GBP will trade at a significant discount to fundamental equilibrium for some time," says Elias Haddad, Senior Currency Strategist at Commonwealth Bank of Australia.

However new research from investment bank Investec finds the "gloom in macro expectations for the UK may be overdone" and they foresee a recovery in the British Pound over coming months as a result.

The global lender and financial services provider says although they have lowered their UK economic growth forecasts for 2022 and 2023 they do not believe a recession in the UK is inevitable.

Instead, strong wage dynamics and the spending of savings amassed during the Covid pandemic will provide a cushion for the economy during the 'cost of living crisis'.

"Some of the gloom in macro expectations for the UK may be overdone," says Philip Shaw, Chief Economist at Investec in London. "Momentum in wages and employment is strong, as are buffers from high savings."

"we still look for GBP to appreciate, especially against USD," says Shaw. "from the currency perspective, we see the most likely scenario to be a recovery in GBP following its weakening from the start of the year."

"Against EUR, we foresee more limited gains. Some of the gloom in macro expectations for the UK may be overdone, but as policy rates start to rise in the Euro area, this may support demand for EUR," says Shaw.