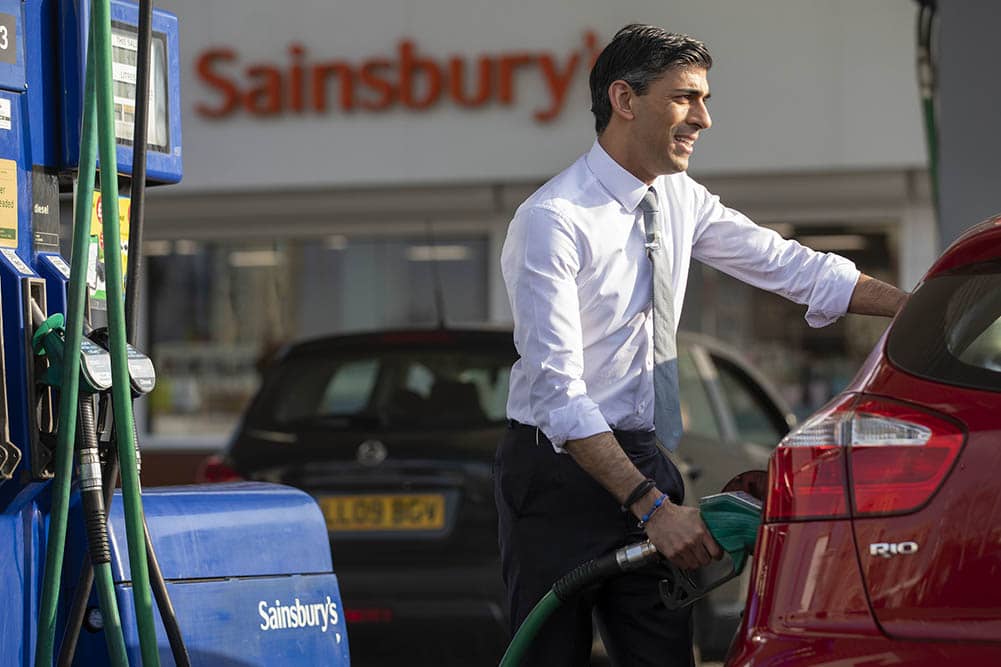 Above: The Chancellor Rishi Sunak visits a Sainsbury's supermarket in south east London after delivering his Spring Statement to parliament. Image: Gov.UK.

The British Pound is proving highly sensitive to global investor sentiment and fears that a sharp slowdown in UK economic growth over coming months will lead to a drastic cut in expectations for future Bank of England rate hikes.

The Pound fell through the midweek session and gave back some of the week's earlier strong advances amidst a stock market selloff that appeared linked to another push higher by oil prices, while the Spring Statement from Chancellor Rishi Sunak offered a sober assessment of the UK economic outlook.

"WTI and Brent have both risen strongly once again," says Chris Beauchamp, chief market analyst at IG. "The day looks to be a recurrence of war concerns, boosting oil prices while continental European markets fall sharply".

Hydrocarbon prices rose on Wednesday after Russia said it will seek payment in Roubles for gas sold to "unfriendly" countries.

The requirement complicates the supply of oil and gas to the European Union, which would be the region most impacted by the move.

The market naturally bid prices for oil and gas as a result of the development. 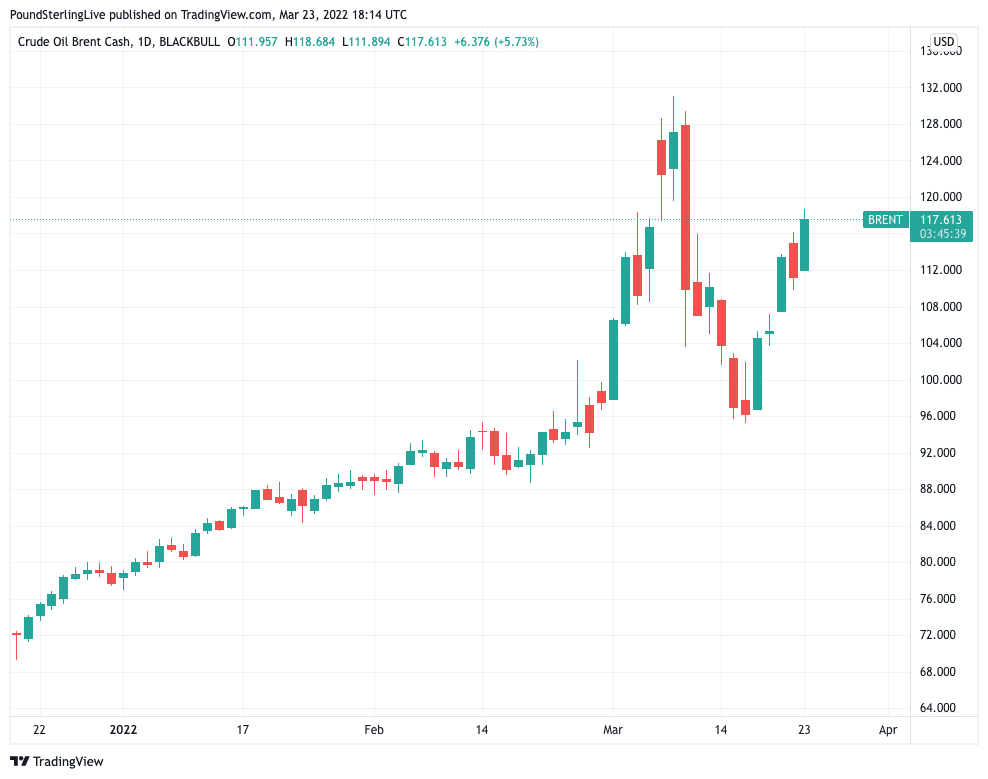 The Pound to Euro exchange rate rose to a high of 1.2054 midweek before retreating back to 1.20 alongside a dip in markets, the Pound to Dollar exchange rate went as high as 1.34 on Wednesday before paring its advance to 1.3180.

Commodity, stock and foreign exchange markets are proving highly sensitive to headlines emanating from Ukraine where the conflict with Russia enters its 29th day, with no let up in fighting likely near-term.

Nevertheless, positive sounds on the prospect for progress in peace talks have been a feature of the past two weeks of the conflict, underpinning a market recovery from the early March lows when extreme fear dominated investor sentiment.

Investors have largely come to terms with the emerging status quo in Ukraine. "The market is removing the tail risk that the Russia/Ukraine conflict will escalate into a hot war involving other countries. That’s reduced the uncertainty premium in the FX space and added a tailwind for higher beta currencies," says Bipan Rai, North America Head FX Strategy at CIBC Capital Markets.

The Pound can continue to benefit from any further easing of tensions related to Ukraine, but understandably the situation remains unpredictable and offers further volatility for currencies. 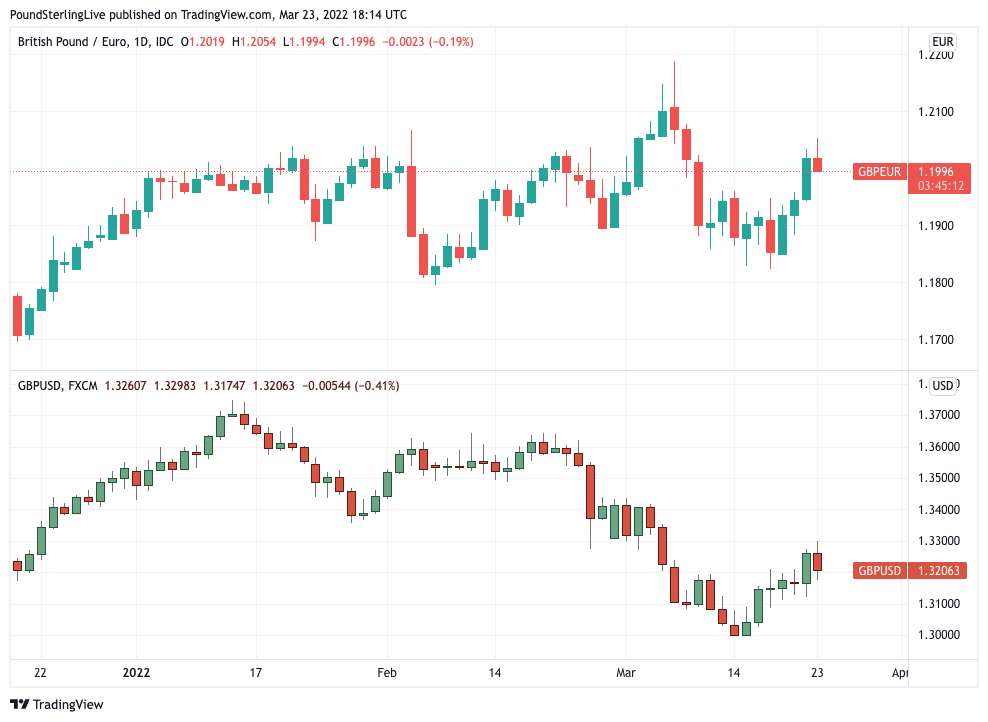 Above: GBP/EUR (top) and GBP/USD (bottom) at daily intervals.

Foreign currencies that belong to countries that are net importers of energy will prove particularly vulnerable during times of spiking prices, while energy and commodity exporters will remain supported.

This dynamic has been on display over the past 24 hours: the Australian, New Zealand and Canadian Dollars have lead while the Euro and British Pound have struggled.

Safe haven currencies like the Franc and Dollar have also been supported as some stock market holdings are converted into cash.

Research from Barclays finds energy dependency to be important factor to consider when assessing the outlook for G10 currencies in the current environment.

"Among the G10 energy importers, the UK is the most energy self-sufficient. It produces 71% of its primary energy consumption needs, compared with only 21%
for the eurozone," says Daly.

Daly says over 80% of the UK’s natural gas imports come from Norway, with only 15% from Russia.

"While the UK will still be affected by the energy price shock, it does not face the same magnitude as its European peers," she adds.

But the UK economic outlook has still suffered a significant blow due to the energy price surge caused by the war in Ukraine, with the Office for Budget Responsibility (OBR) announcing Wednesday it had slashed UK GDP forecasts.

"As a net energy importer with a high degree of dependence on gas and oil to meet its energy needs, higher global energy prices will weigh heavily on a UK economy that has only just recovered its pre-pandemic level," said the OBR.

The OBR predicts real livings standards in the UK are set to fall by 2.2% in 2022-23, their largest financial year fall on record. 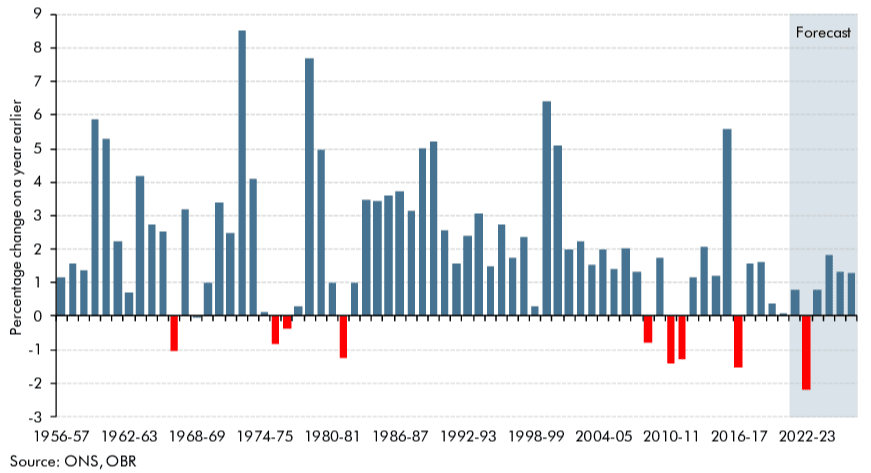 Above: Change in real household disposable income per person

The ongoing upswing in inflation should prompt the Bank of England to raise interest rates further, but the hit to economic growth could also prompt some caution by policy makers who fear higher rates could contribute to the UK economic slowdown.

Money market pricing shows investors are prepared for up to 130 points of rate hikes from the Bank of England in 2022, but some analysts say this is far too aggressive an assumption.

They say the Bank will fail to meet market expectations and this could in fact pressure the Pound lower over coming months as elevated expectations meet with the reality set out by the Bank.

"The fiscal consolidation set to hit the economy in April remains so intense that we continue to expect the recovery in households’ real spending to almost grind to a halt and the MPC to hold back from raising Bank Rate this year as quickly as markets expect," says Samuel Tombs, Chief UK Economist at Pantheon Macroeconomics.

They forecast a further decline in the Pound, with the Pound-Dollar exchange rate retreating to 1.28 in 2022.

Pound Sterling rose against the Euro, Dollar and other currencies in the first part of this week helped by positive sentiment on global markets and a ramping up of bets for Bank of England rate hikes.

On Monday money markets showed investors to be anticipating 111 points of rate hikes from the Bank of England in 2022, this shot up to 130 as of Tuesday and by Wednesday it was at 138.

Over this period the Pound rallied against the Dollar, Euro and the majority of G10 currencies, confirming the importance to rate hike expectations for the currency.

If this trend can continue the Pound can go higher, but the obvious risk for Sterling 'bulls' at this juncture is that expectations are pared back.

"In our view the UK money market remains too aggressively priced for BoE rate hikes during the course of this year," says Jane Foley, Senior FX Strategist at Rabobank. "In view of the headwinds to growth in the UK, we see the potential for further BoE rate rises to already be running out of road."

Foley says the Pound should start to trend lower against the Euro should the market raise bets the European Central Bank (ECB) will tighten policy at the end of 2022.

"This view, however, is caveated by the stagflationary risks which could come from a worsening in the energy crisis in Europe," she adds.