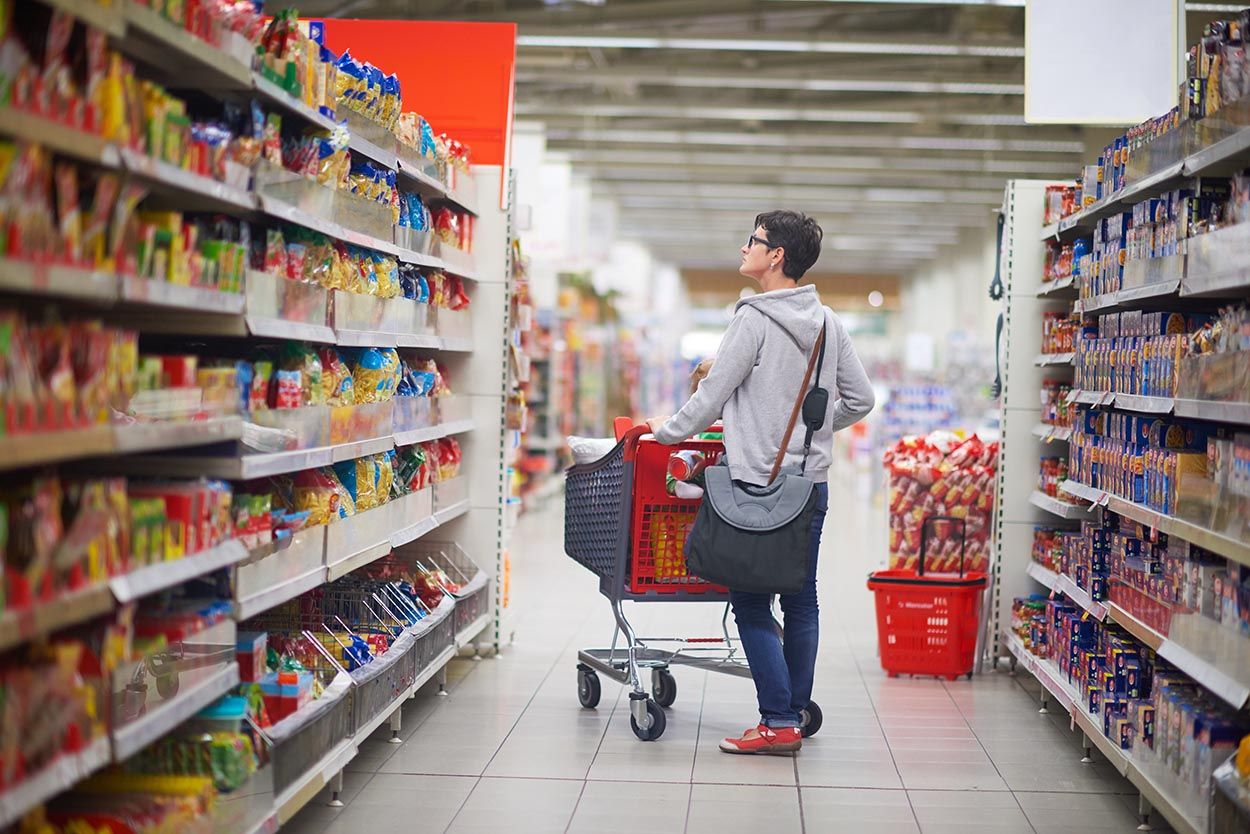 UK inflation came in softer than expected on Wednesday but with markets anticipating a surge in price rises over coming months the Bank of England remains set to raise interest rates, and analysts say the British Pound should remain supported as a result.

Headline CPI inflation came in a touch softer than expected having increased 3.1% in the year to September, which is below the 3.2% reported for the year to August and the 3.2% expected by markets.

However expectations for higher inflation in the future are ubiquitous amongst analysts and these numbers will unlikely shift the dial at the Bank of England.

"It's unlikely to significantly reduce expectations that the BoE will raise interest rates before the end of the year," says Paul Dales, Chief UK Economist at Capital Economics.

The rate of inflation is now well above the Bank of England's 2.0% target and above the 3.0% forecast by the Bank back in August and looks set to remain above target for months to come.

"GBP is up versus USD and EUR. GBP can edge higher because the BoE is more worried about runaway inflation than the Fed and ECB," says Elias Haddad, Senior Currency Strategist at Commonwealth Bank of Australia. 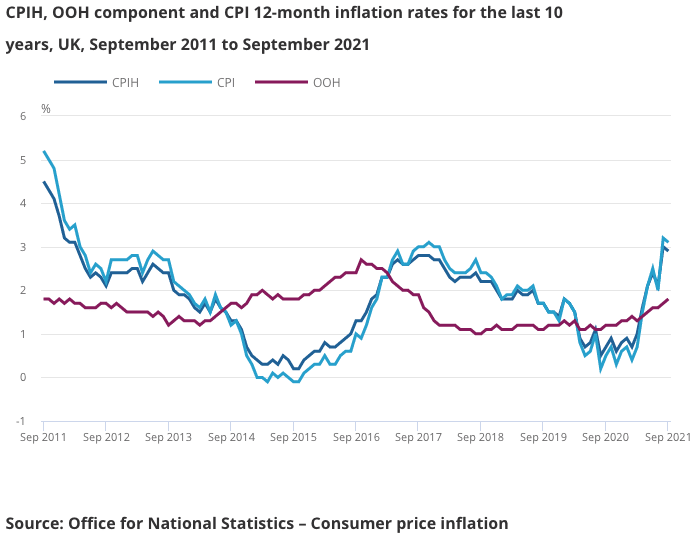 The ONS says downward forces were exerted on headline inflation due to 'base effects' in that this month's inflation is being compared against an unusually high rise of prices exactly a year prior when the Eat out to Help Out scheme ended.

Current inflation data could therefore be flattered by this statistical anomaly.

Members of the the Bank of England's Monetary Policy Committee have indicated that they could soon raise interest rates to avoid inflation expectations amongst businesses and consumers becoming more entrenched.

Although the Bank recognises that much of the current surge in inflation is down to supply side issues - which they have no control over - the fear is that by not acting inflation becomes embedded elsewhere in the economy.

Building rate hike expectations have in turn aided the Pound higher against most of its peers.

"Sterling is on a tear thanks to growing expectations for the Bank of England to deliver an interest rate hike from record lows of 0.10% before Christmas," says Joe Manimbo, Senior Market Analyst at Western Union.

The Pound to Euro exchange rate traded near its highest levels in 20 months on Tuesday and is at 1.1852 at the time of writing in the wake of the CPI inflation release.

The Pound to Dollar exchange rate rose to its highest level in more than a month and is at 1.38 on Wednesday. 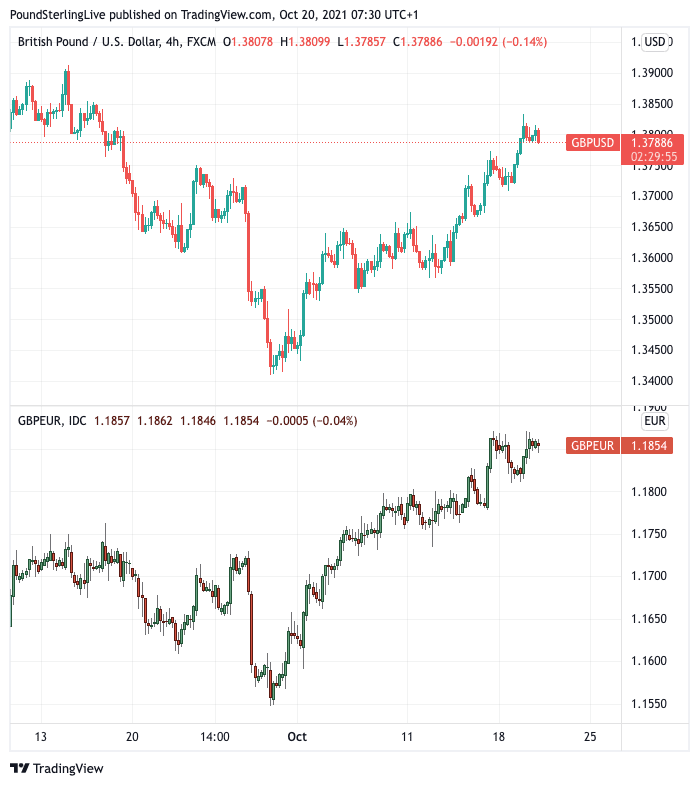 Above: Four hour chart for GBP/USD (top) and GBP/EUR (bottom).

The ONS says the large queues seen at petrol stations at the end of September fell outside of the price collection window and will therefore be reflected in next month's readings.

The return of air travel also contributed an upward push to inflation as did an ongoing rise in value of second-hand vehicles.

Although restaurants and hotels provided a downward influence on prices - as per the base effect mentioned above - there are signs that this sector is starting to see some real upward pressures.

Ian Wright, the chief executive of the Food and Drink Federation, told lawmakers on Tuesday that inflation in the hospitality sector was running at up to 18% as businesses faced soaring wage, energy and commodity costs.

"In hospitality, which is a precursor of retail, inflation is running between 14% and 18%. That is terrifying," Wright told the Business, Energy and Industrial Strategy committee.

The reference to soaring wage bills should be noted as this is exactly the type of inflationary pressure that the Bank of England will be interested in going forward.

"Inflation is a bigger scourge than almost anything because it discriminates against the poor," said Wright.

Inflation is forecast by the Bank of England to peak above 4.0%, although numerous economists are forcasting far greater rises.

Independent research house Pantheon Macroeconomics expect CPI inflation to a peak of about 4.7% in April, once the next set of energy price rises are approved by the energy regulator. Capital Economics see the April peak coming in at 5.0%.

"The bigger picture remains that inflation is causing the Bank of England a headache, especially coupled with no sign of an easing in the energy price surge. Given recent statements from Bank officials, it looks likely an interest rate hike will happen soon," says Richard Carter, head of fixed interest research at Quilter Cheviot.

"However, we believe that he MPC will avoid tightening too aggressively as they will want to see the economic recovery continue in what remains a fragile economic landscape," adds Carter.

Money markets are fully priced for a rate hike to take place in November, with as many as three follow up hikes due in 2022.

"Since policymakers should be aware of market pricing upon making such announcements, it would be a serious communication failure if the BoE now waited until 2022 to hike," says Kallum Pickering,
Senior Economist at Berenberg Bank.

Would raising interest rates be a mistake that would ultimately have to be reversed at some point in the future?

"This outcome is unlikely, in our view. More likely, markets have overreacted to BoE guidance, which has been dialled up much faster than expected in recent weeks," says Pickering.