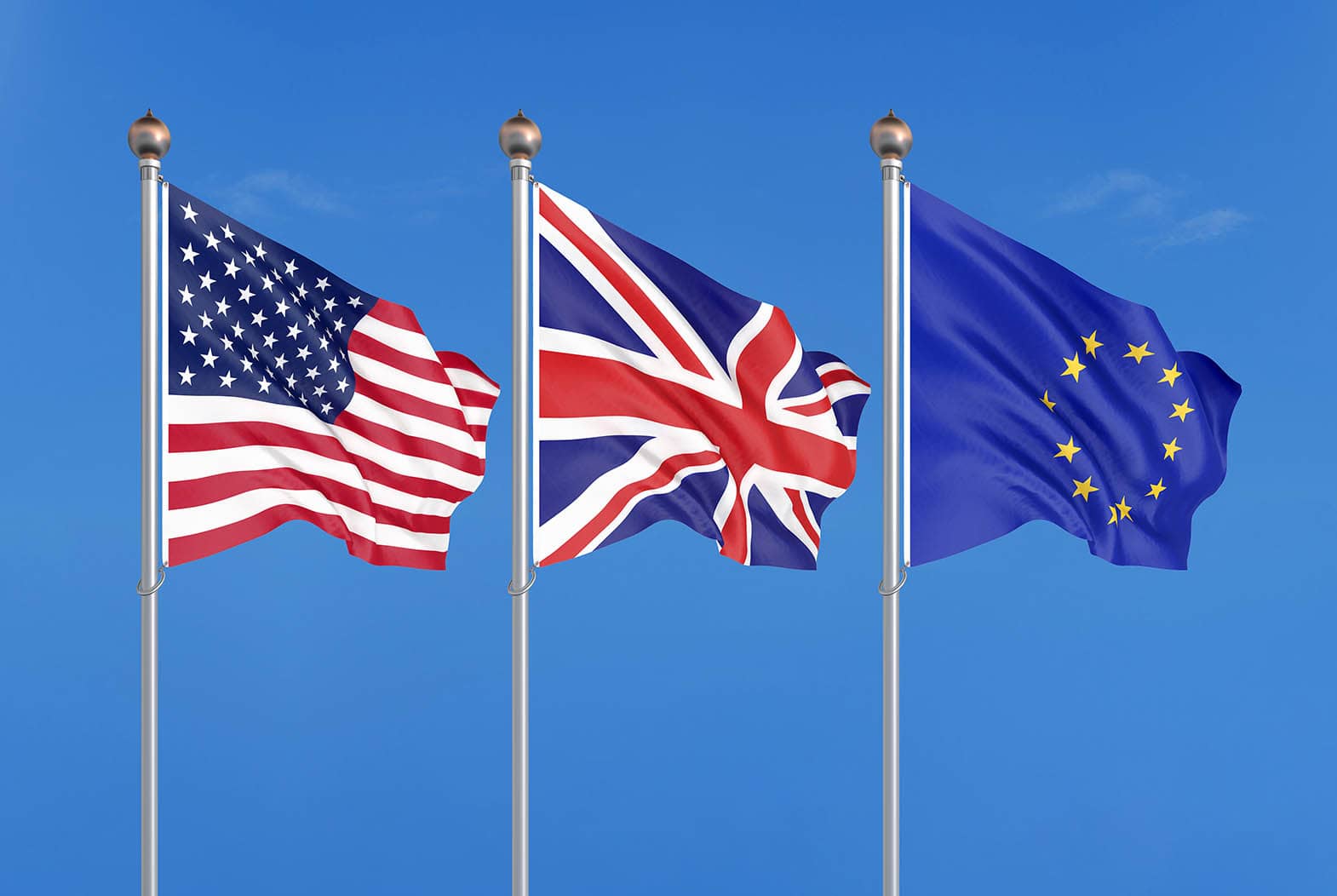 The British Pound has turned a corner and it would be unwise to sell it, says a veteran currency market trader.

Brent Donnelly, President of Spectra Markets and author of Alpha Trader, says he is no longer 'bearish' on the Pound in the wake of this weeks events as he believes a recent market panic over fuel has run its course.

"The number of people talking about gas station lineups and failing energy retailers in the UK is also probably a potential sign of a peak in the Great Energy Panic of 2021," says Donnelly, who most recently worked at HSBC's trading desk in New York.

"I have been bearish GBP on the “hiking into an energy and labor shortage is bad” theme but I will say this: people tried this trade in the USD at the end of 2020 (sell USD, sell bonds) and it worked for a few weeks then went horribly wrong. Fast," says Donnelly.

It appears that selling the UK currency has already turned against traders: the Pound-to-Euro exchange rate fell from a weekly open at 1.1664 to reach a low at 1.1548 on Wednesday before recovering to a high at 1.1657. 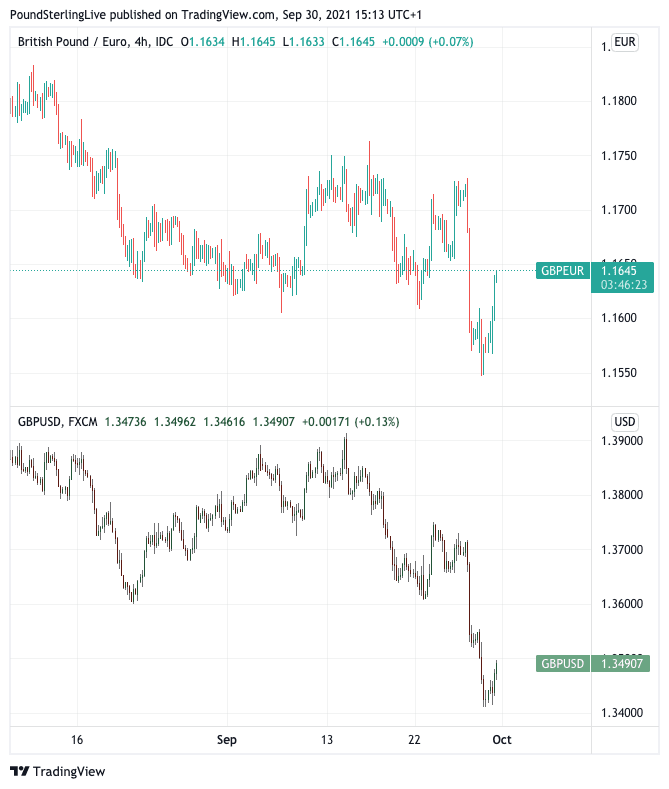 Above: 'Turnaround Thursday" for the pound?

What is the 'nominals' referred to above?

These are nominal bond yields: they are the coupon payments on UK government bonds, and they have been rising sharply lately as investors anticipate higher UK inflation and interest rates at the Bank of England in the future.

Typically rising yields are supportive of a currency, therefore the Pound's fall in the face of rising yields raised eyebrows amongst investors, with one analyst - Adam Cole at RBC Capital Markets - even suggesting the Pound was now behaving as an Emerging Market currency. 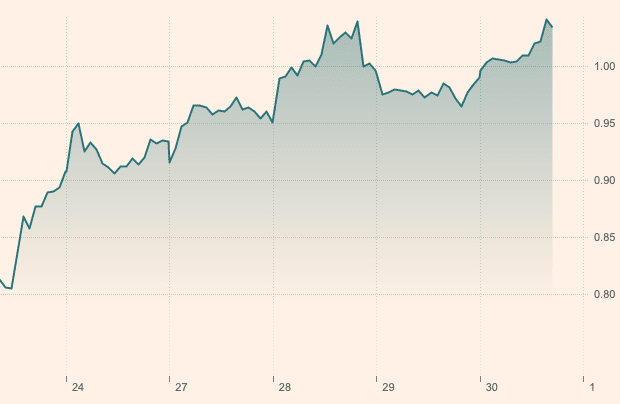 Above: The yield on UK ten year gilts.

But, strip out inflation from this yield and you are left with the 'real yield'; this is what holding the bond will realistically return to its holder.

An argument made by some currency market commentators is that the problem for the Pound is that while nominal yields have been shooting higher, real yields haven't.

They say this suggests investors are nervous about UK inflation rates, to the detriment of the higher returns bonds are offering. 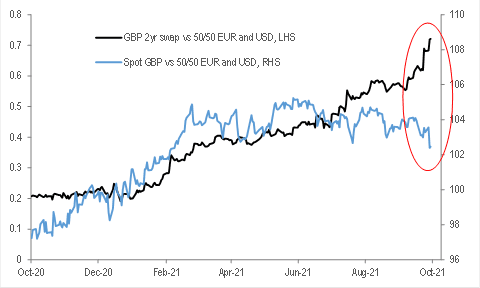 "Front-end yields rose relative to every other G10 market, and GBP was the worst performing G10 currency. While this was a very large one day divergence, it is worth noting that rates and GBP have been moving in opposite directions since early-September, with GBP not benefiting from a significant widening in rate spreads," says Cole.

The chart reveals that what was once a solid determinant of Pound value has since become less so.

But, Donnelly's argument is that when UK 'real' yields stabilise investors will be quite happy to focus on the UK's yawning nominal yield advantage once more.

The above chart would suggest there is some decent upside potential in the currency were this to occur again.

But Donnelly says real yields must stabilise before the Pound can rush higher, which would in turn require inflation expectations to calm.

The clear driver of the recent 'inflation panic' amongst global investors is the surge in energy prices, therefore it stands should this inflation fears fade the pieces will fall into place for a rally in the Pound.

Donnelly notes that the energy trade - whereby speculators join the market to bet on ever higher prices of gas - could be frothy and a top is imminent.

"Yesterday’s volume in UNG (the NYSE-listed natural gas fund) was more than 4X its prior 20-day average. That is highly unusual and has marked the top of NG within one day on the prior two occasions," he says. 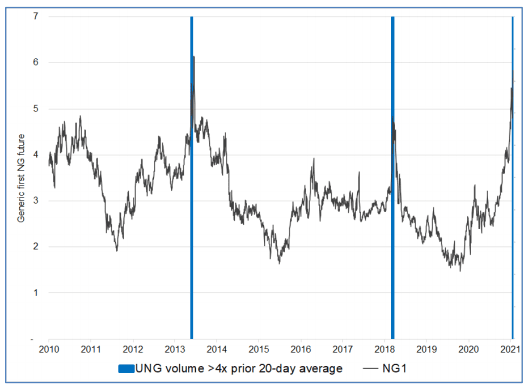 "It’s a small sample size but I think it’s worth noting as it’s logical to forecast that frenzied interest from tourists might identify a blow-off top in a mean reverting market like natural gas," says Donnelly.

(The reference to tourists in this instance refers to speculative traders entering the market to make a quick buck).

In the UK the energy crisis went a step further when consumers swamped fuel stations on the fear there might be fuel shortages; this is herd behaviour but who can blame them given the government's energy cap meant a significant number of providers have gone bust owing to rising wholesale prices?

This means UK consumers are probably the most attuned to the global crisis and susceptible to panic buying of fuel than in other countries.

But Donnelly sees signs that this panic is easing too:

"The number of people talking about gas station lineups and failing energy retailers in the UK is also probably a potential sign of a peak in the Great Energy Panic of 2021".