Pound Sterling endured a soft start to September but a confluence of supportive developments leaves the currency pointed higher over coming days.

The British Pound is looking to end the week higher in value against a host of major currencies courtesy of a sizeable advance recorded on Thursday.

Instead, there appear to be four factors behind the move:

The Pound extended earlier gains to three-quarters of a percent against the Euro following the European Central Bank's (ECB) September policy meeting.

The ECB said it would reduce the amount it spends on its crisis-era quantitative easing programme.

This would typically be supportive of a currency, but investors had been anticipating the decision for some time now.

Therefore the fall in the Euro looks to be a "sell the fact" reaction that has allowed Sterling to go higher in its wake.

Until the ECB signals their medium-term inflation targets are at, or above, 2.0% the conditions for a rate hike will have not been achieved.

That the 2023 inflation forecast was lowered from 1.5% to 1.4% suggestsg scant chance of an ECB hike in the next two years. 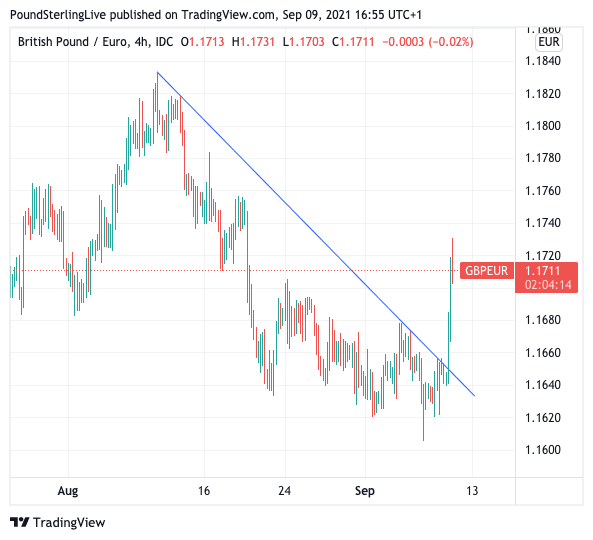 Above: The August-September downtrend in GBP/EUR looks to have been broken

2) A Bank of England Rate Hike is Coming

The contrast between when the ECB and the Bank of England (BoE) could not be more striking.

BoE Governor Andrew Bailey said on Wednesday that half of the members of the Monetary Policy Committee already believe the minimum conditions for a rate hike are now in place.

This surprised a market that did not expect four policy makers on the eight-person Committee (soon to be nine once more) to be leaning towards rate hikes, particularly after the 8-0 vote to keep rates unchanged at the August meeting. 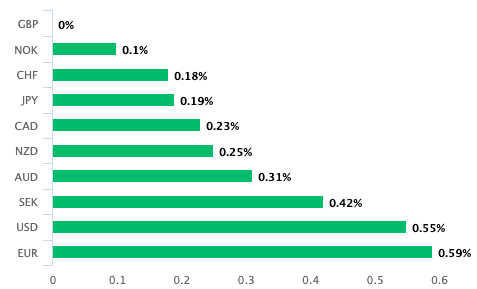 Above: GBP outperformed all peers on September 09

The admission nails to the wall a rate rise in the first half of 2022, which is the current market expectation.

This would mean the BoE moves sooner than both the ECB and Federal Reserve.

This is a supportive narrative for GBP/EUR and GBP/USD.

But a word of caution from analyst You-Na Park-Heger at Commerzbank:

"It should become increasingly clear in the next few months that inflation will indeed decline again and that there is therefore no urgent pressure on the Bank of England to act. We expect the first interest rate hike in the first quarter of 2023.

"Rate hike expectations for 2022 should therefore prove premature in our opinion."

Commerzbank says the looming disappointment should be reflected in lower GBP/EUR levels next year.

3) The negative reaction to UK tax hikes was overdone

The Pound fell following Tuesday's news that the UK government would raise some taxes, ensuring the overall tax burden in the UK is now at its highest level since the Second World War.

Higher taxes are seen as a headwind to UK economic growth.

But the market has taken the move in its stride with one analyst pointing out that the UK's desire to keep its debt under control could actually help the Pound in the long run.

"The UK’s debt to GDP ratio is now lurking around 100%, a level the government will surely be uncomfortable with. It is possible therefore that despite the potential risks to growth from a higher taxation base, the fiscal responsibility could support Sterling," says Charles Porter, foreign exchange analyst at SGM Foreign Exchange Ltd.

Porter also notes the muted Tory rebellion in Wednesday's parliamentary vote on the tax rises and the decision by the Labour Party to vote against the bill have diminished any immediate political risks that could have impeded Sterling.

The UK economic growth rebound is picking up a head of steam again following a soft patch over the summer months according to a weekly short-term data series from the ONS.

With self isolation rules having been relaxed in mid-August and the end of school holidays falling in the first week of September people are returning to their offices.

This should boost cash-starved businesses in major cities and signals that the UK is putting the pandemic behind it.

But it will be next week's data release that will be of significant interest given it will capture the 'back to school' effect of the week commencing September 05.

It was reported that Monday saw significant increases in traffic as workers returned to their office and suggests a post-summer 'back to school' effect could herald a more decisive return to normality for the UK economy.

But scientists warn that Covid cases could increase again in Autumn as is commonly the case with these types of respiratory viruses.

The UK already has a high prevalence of Covid and any surges in cases could place pressure on the NHS.

Therefore the recovery could yet be upended by a resurgence in the virus.

"Uncertainty about the virus, and the impact of labour and component shortages are key concerns," says Andrew Goodwin, Chief UK Economist at Oxford Economics.