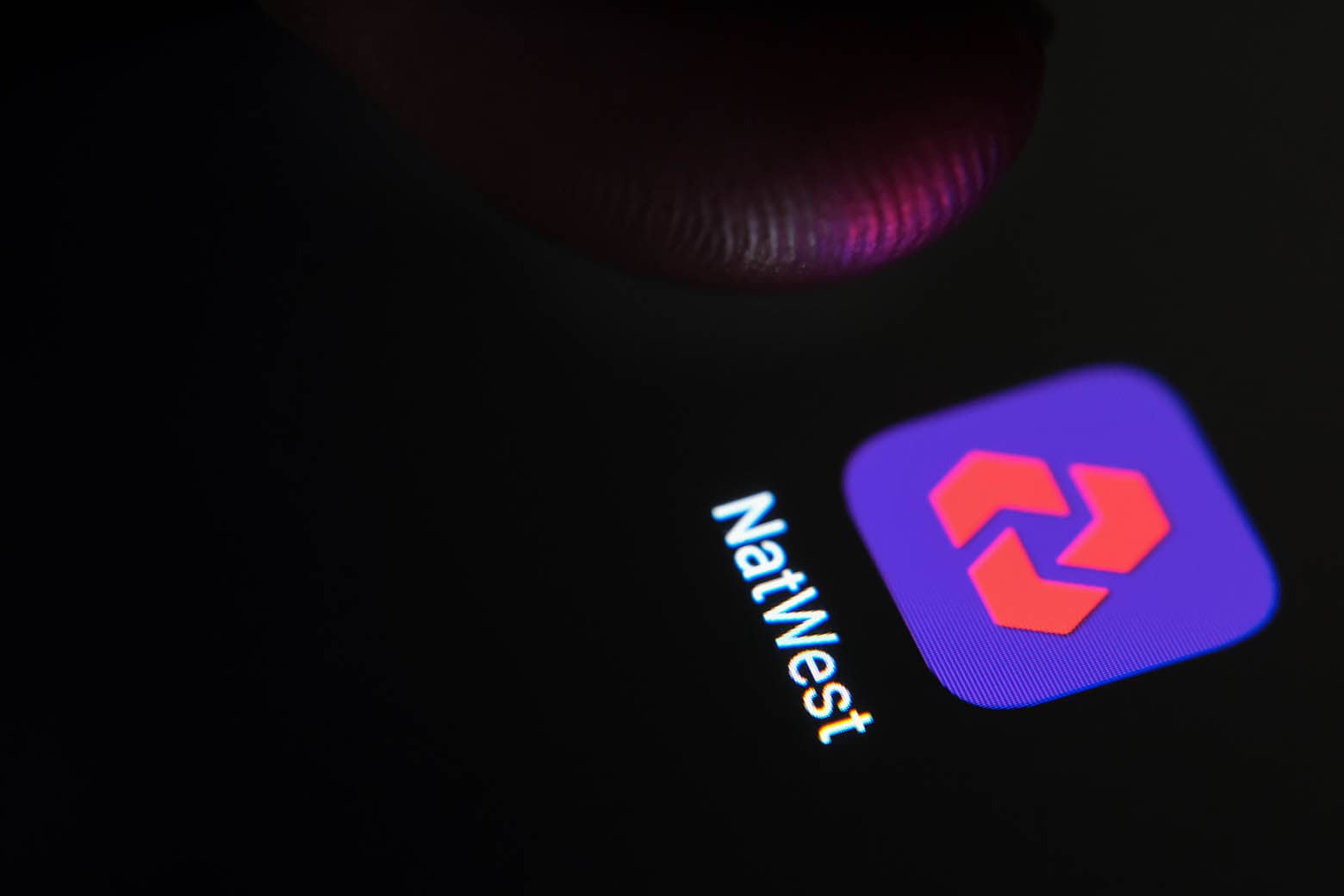 The British Pound is likely to remain supported against the Euro and Dollar over coming weeks but as we move into the back-end of 2021 that support is likely to fade, leaving a high-water mark for Sterling sellers potentially around the third quarter says a leading UK high street lender.

NatWest join other foreign exchange analysts in saying the ability to rollout vaccines rapidly in the UK has allowed the economy to rebound and given the depth of the covid collapse, that rebound should be sharper than in other nations.

"Sterling has found support from the UK’s vaccine roll-out relative to other major economies," says a note from the NatWest Markets foreign exchange team in a monthly research briefing.

"While the pace of rollout has been a factor, it’s the UK economy’s underlying sensitivity to the vaccine that has been the most important aspect," they add. "The UK has suffered the greatest hit to GDP of the developed economies during the pandemic and therefore has the most to benefit from the easing of restrictions." 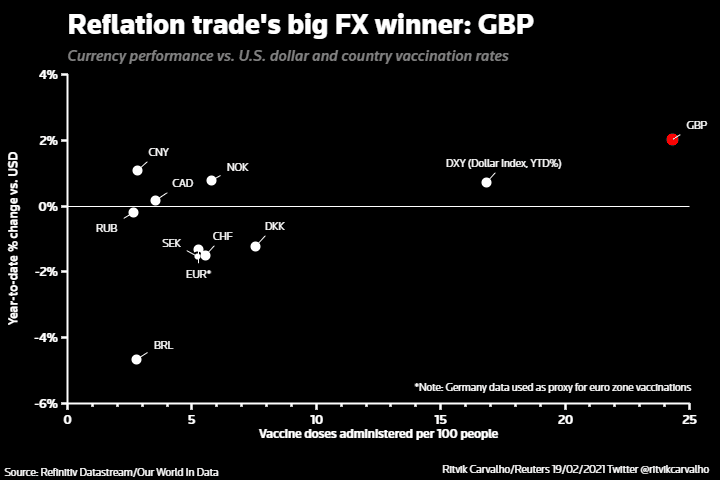 Above image courtesy of Reuters.

The relative vaccine trade has seen the British Pound outperform all its peers in the first quarter of 2021, particularly when contrasted to currencies where vaccinations were lagging.

But, April then saw much of these advances reversed as the Pound lost momentum, partly as the vaccination exceptionalism lost its shine as other countries caught up.

"Much of the UK’s positive story is already in the current level of Sterling and so the scope for Sterling gains has naturally become more limited," says NatWest. However May has seen the Pound rally once more, with analysts saying the passing of Scottish elections has seen a fading of anxieties relating to the prospect of another independence referendum.

For those watching movements in the Pound, the question has become whether these gains can advance and deliver fresh 2021 highs at some point in May or coming months.

NatWest see further upside potential in that the government's roadmap out of lockdown remains in place with a third major unlocking coming due on Monday 17 May.

The final unlocking is scheduled for June 21, provided the UK does not suffer a setback in the form of rising Covid-19 cases.

"Additional support is likely from a rundown of household savings which grew substantially during the pandemic and a loose fiscal policy stance," says NatWest.

Indeed, much of the recent advance in Sterling has its foundations in the Bank of England's May 06 policy meeting where policy makers announced they would be reducing the scale of weekly quantitative easing purchases while raising their economic forecasts.

The Bank of England now sees the UK economy returning to its pre-pandemic size before the end of 2021.

Meanwhile, developments in the Eurozone and U.S. should confer some support to their respective currencies.

The Eurozone's rapidly accelerating vaccination programme will put the bloc in a position to unlock, building a feel-good shift towards Eurozone assets amongst investors.

"The May ECB has the look of the high water mark for dovish policy guidance. The June meeting should be an inflection point in policy, with updated forecast s and an update on the central bank’s asset purchase program. These can play EUR positive," says NatWest. 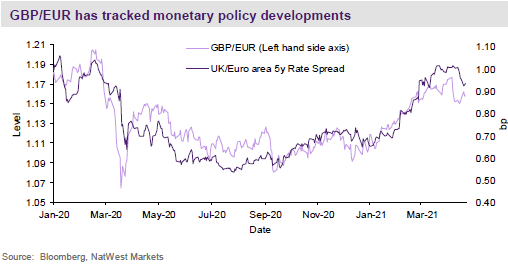 The U.S. economy is meanwhile seen to be enjoying very strong rates of growth driven by domestic demand.

"Capital inflows seem unlikely to offset a trade balance deterioration given rich asset valuations and low US yields. At the same time, many countries should benefit from increased import demand in the US," says NatWest. 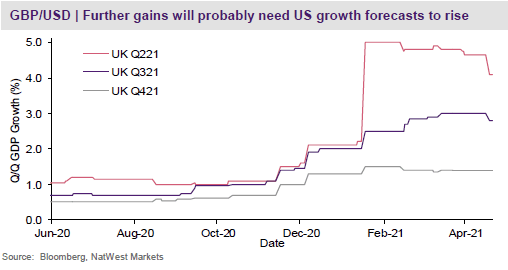 "So monetary policy isn’t expected to provide any meaningful support for the USD in the near-term," says NatWest.

But economists say talk of a possible Fed taper (reducing quantitative easing) will build in the second half of the year, "providing some modest support for the currency."

They thus see GBP/USD giving back early 2021 gains in the second half of the year.