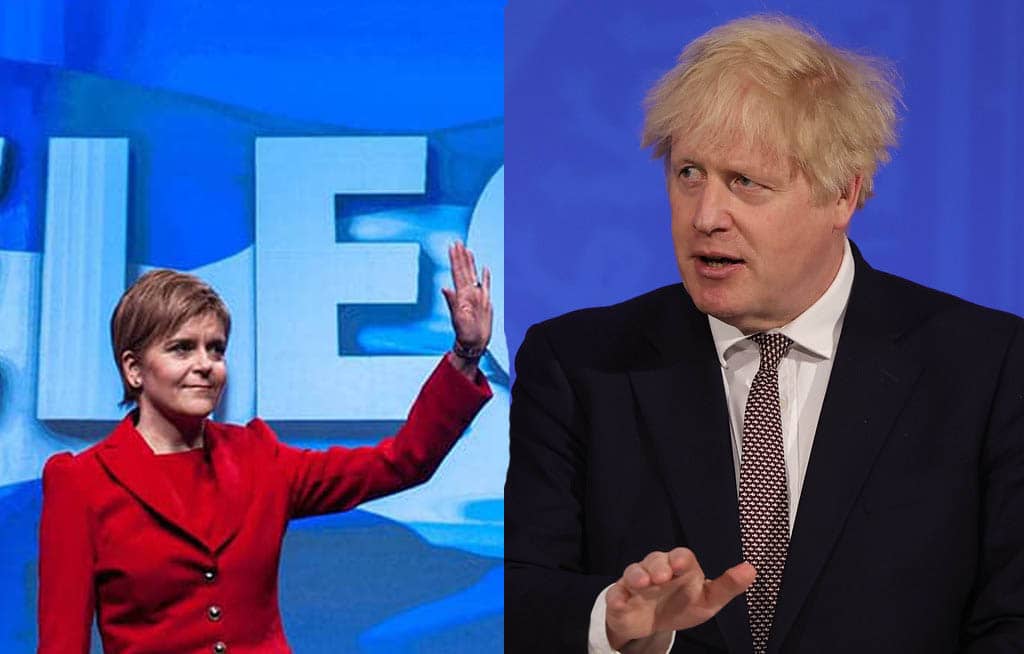 Above: Image of Nicola Sturgeon courtesy of the SNP on Flickr, reproduced under CC licensing. Image of Boris Johnson by Andrew Parsons / No 10 Downing Street.

An unusually strong impulse of demand for the British Pound by investors has been encouraged by fading political risks linked to the Scottish elections and an ongoing economic revival.

The economy is expected to receive a further boost from next Monday when the third major step in unlocking from Covid-19 restrictions comes into force, a move confirmed by Prime Minister Boris Johnson on Monday May 10.

"Sterling is proving the main outperformer, also due to the additional easing of lockdown measures expected in the UK from 17 May, the success of the Tory party in local elections and the diminishing risks of a Scottish referendum as the SNP failed to win a full majority in the Scottish Parliament," says Roberto Mialich, FX Strategist with UniCredit Bank.

The hospitality and services sector will be the main beneficiaries of the unlocking as indoor dining is allowed to resume, while cinemas, hotels and indoor child play areas reopene.

"Next week's re-openings (17 May) will be welcome in providing a further boost to the recovery," says Fabrice Montagné, an economist with Barclays.

Barclays have noted their near-term gauges of UK economic data have started slowing of late but they say the next phase of unlocking should provide the boost required to underpin improving economic momentum.

"Macro-economic indicators over the last few weeks have given Sterling bulls much to be happy about. An on balance ‘hawkish‘ Bank of England, near term risks around Scottish independence fading, and a poor Non-Farm Payroll number in the US have all boosted price action in Cable," says Joe Tuckey, an analyst for Argentex. 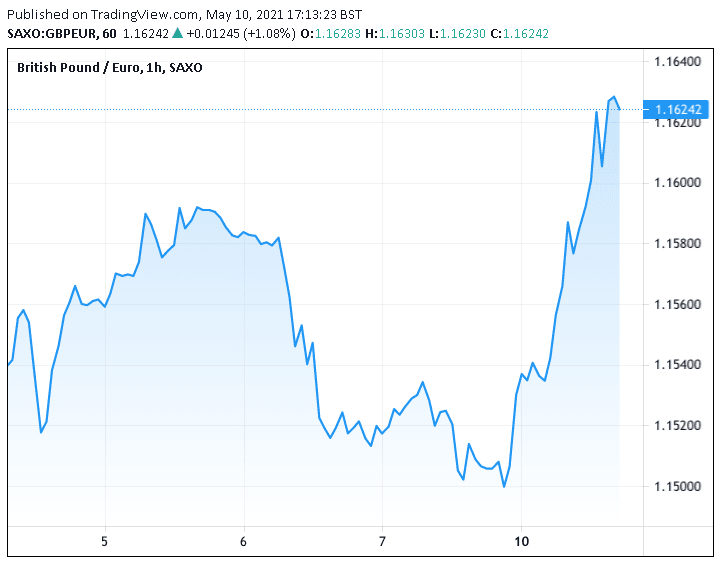 The Bank of England (BoE) last week reduced their quantitative easing programme in what amounts to a bullish move by the central bank for Sterling bulls.

However, the reaction of Sterling to the developments - which came alongside upgrades to UK economic forecasts - was lacklustre at best, suggesting to analysts political anxieties surrounding the Scottish elections might have been denting demand for the currency around this time.

This political risk premium in Sterling was however unwound by the weekend results that showed the Scottish National Party (SNP) of Nicola Sturgeon failed to secure an all-out majority in the vote.

Sturgeon says she will seek a second independence referendum, but said the move is not an immediate priority.

"Opposed by the UK government, a legal mess on whether approval from Westminster is necessary could unfold. The risk of Scottish independence further down the road has not increased, we therefore maintain our Neutral pound outlook," says David Alexander Meier, an economist at Julius Baer. 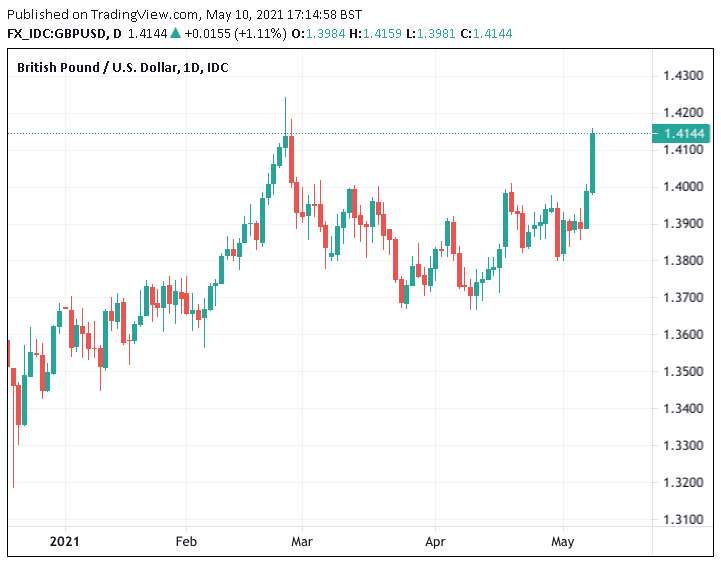 "Holding an immediate referendum is not that inviting for the SNP, as polls show that as of now there is no majority for independence in Scotland. All in all, the election did not change the balance of power in Scotland, nor did it shift the probability of a next independence referendum happening," says Meier.

"The risk of a Scottish independence referendum happening has neither increased nor eased. We therefore stick to our Neutral outlook and believe that in the short term the unfolding economic recovery and a less stimulating monetary policy after last week‘s tapering of BoE asset purchases are currently the far more important short-term drivers," says Meier.

"Sterling jumped to its strongest since late February as the dust settled over the spate of UK elections on Thursday and a weaker dollar resulted from the nonfarm payrolls miss. Boris Johnson’s position looks secure, Labour is in disarray and Nicola Sturgeon has regained control of the Scottish parliament. Near-term worries about a second referendum on Scottish independence appear to have retreated somewhat," says Neil Wilson, Chief Market Analyst at Markets.com.

Wilson joins those analysts who agree the SNP are biding their time and are not pressing ahead immediately in a quest for another referendum, noting even most pro-indy voters don’t think it’s the most pressing matter.

"For now, sterling traders can afford to ignore the noise and focus on the near-term economic trends. With the break of 1.40 at last bulls can consider the Feb 24th peak at 1.4250," says Wilson.

George Vessey, a foreign exchange strategist at Western Union, says the odds of an independence referendum happening before 2025 are slim, so short term political risk premium appears to have been removed from Pound Sterling’s price.

"GBP/USD is now trading at a 10-week high and is 1.8% stronger in May – a month in which the currency pair has fallen circa 2% on average over the past decade," says Vessey.

Despite the election delivering a clear parliamentary majority for independence, economists at Barclays argue that such a multiparty platform would be a weaker proposition than an outright SNP majority and makes the pursuit of a referendum much more complicated.

"Pro-independence parties would need to swiftly iron out divergences that led them to campaign separately in the first place. The complexity of Scottish independence means that members of such a pro-independence alliance would almost certainly differ regarding practical implementation, possibly weakening the case for independence," says Montagné. 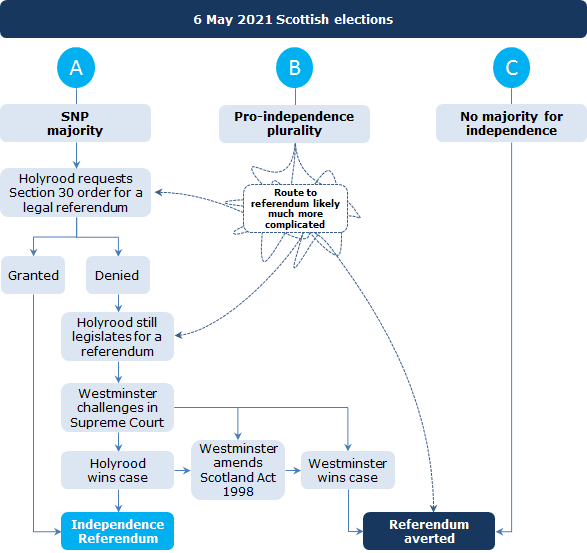 "The opposite camp would also likely exploit such fragmentation to spin the election result as a verdict against a new referendum, not least because the SNP is the dominant party in Scotland and a failure to secure a majority in 2021 on the basis of an explicit independence platform would likely be seen as a setback," says Montagné.

Barclays FX strategist Marvin Barth points out that even were a Scottish separation look imminent the long-term damage to the Pound is unlikely to be significant.

He says the reality of Scexit is that it is more a political problem for Westminster than an economic one, while the reverse applies for Holyrood.

"This means that the implications will be large for any potential future Scottish currency – in the past we have called it a "crossbill" – but small for GBP," says Barth.

Barclays tell clients 'Scexit' will only be important to markets if a referendum is called and the polls align to signal trouble.

"That may be many months or even years in the future and has large uncertainties attached to it. Hence, the net present value of any possible future Scexit in today’s terms should be very small indeed," says Barth.

"We continue to view GBP as one of the best prospects within the G10 as the long-term Brexit-uncertainty discount continues to unwind," he adds.