"GBP is the worst performing G10 currency month-to-date. The difficulty for GBP is that much of the good news is likely already in the price," says Daragh Maher, Head of Research, Americas, at HSBC.

Signs that Sterling's rapid ascent against the Euro, Dollar and other major currencies might be over were on full display in the first week of April when the currency rapidly lost altitude and suffered its worst week since September against the Euro.

Analysts cited a combination of positioning adjustment and the view that Sterling's early lead in the vaccination race is now fully accounted for by investors as being behind the rapid reversal in direction.

The Pound-to-Dollar exchange rate (GBP/USD) went as high as 1.39 in early April before dipping back to a two-week low at 1.3670 on Friday April 09.

The Pound-to-Euro exchange rate (GBP/EUR) went as high as 1.18 on April 05 before losing value and triggering six-week lows at 1.1497.

The warning from HSBC to clients is that the Pound still looks overpriced, even in the wake of the sharp declines.

"The currency looks stronger than rate differentials might warrant, while other nations will eventually close the gap on the UK’s early lead in the vaccine rollout race. Consensus UK GDP growth expectations have already been revised higher and the market has long ago abandoned any thoughts of negative policy rates. GBP may languish without fresh impetus," says Maher. 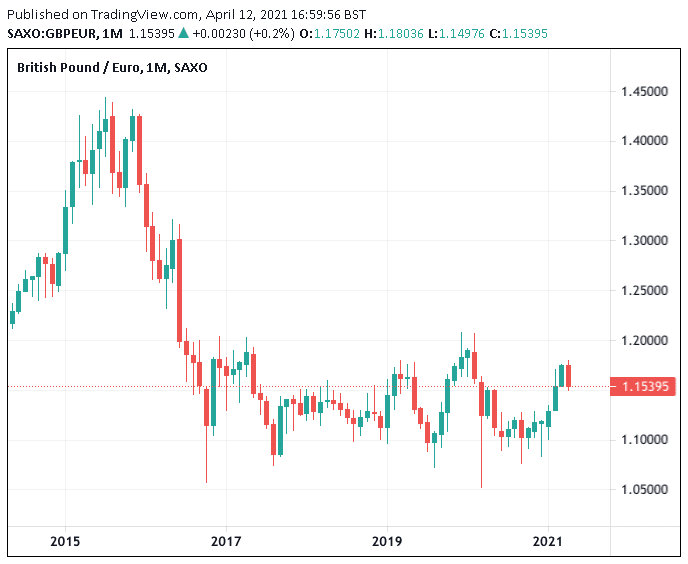 Above: The Pound-Euro exchange rate recovery of recent months put into a long-term context.

The foreign exchange market's focus on the covid-19 pandemic and vaccinations had been a primary driver of Sterling appreciation when it was clear the UK was leading the world's major developed economies in the race to vaccinate and unlock on a sustainable basis.

While the UK continues to meet its vaccination targets, analysts say this story cannot offer the Pound unlimited upside; at some point the vaccination narrative becomes stale and fresh drivers must be found.

The concern in some corners of the currency research community is these new drivers are lacking.

Research from NatWest Markets shows the UK's early vaccination advantage is likely to be closed as programmes ramp up elsewhere, thereby eliminating a fundamental driver of Sterling demand that characterised the first three months of the year.

"The current quarter GBP/EUR outlook is primarily a function of the UK’s path out of llockdown restrictions and the economy’s sensitivity to a successful vaccine roll-out relative to other major economies," says Paul Robson, Head of FX Strategy at NatWest Markets.

Pound Sterling Live has reported on numerous occasions over the past week that the EU's vaccination programme is beginning to accelerate as supply issues are overcome, allowing the bloc to start playing catch-up with the U.S. and UK.

For GBP/EUR this poses headwinds.

"Europe’s vaccination program is set to acceleration through April and May and this is expected to see the EUR take back recent losses, with GBP/EUR seen finishing Q2 pretty much where it started the quarter having traded lower during the course of the period," says Robson.

NatWest say the Pound could yet put in further gains over the duration of coming weeks, but could ultimately suffer a soggy end to the year.

By year-end the vaccination and post-covid rebound narrative will have potentially run its course for foreign exchange markets and issues of longer-term productivity and competitiveness come back to the fore.

Politics could also yet again become a drag on Sterling.

The declines in the Pound of recent days come just weeks ahead of crucial Scottish parliamentary elections that are expected to result in a big win for pro-independence parties.

Current polling puts the SNP party of Nicola Sturgeon in line for a majority in Hollyrood, while other pro-independence parties such as the Greens and Alex Salmond's Alba Party could offer further support to a so-called super majority for independence.

Should pro-independence parties win a 'super majority' it could become increasingly difficult for Prime Minister Boris Johnson to argue against agreeing to another referendum vote.

The prospect of another independence referendum would demand a fresh political discount in the value of the Pound, ensuring it remains heavy and any gains are ultimately capped ahead of their true potential.