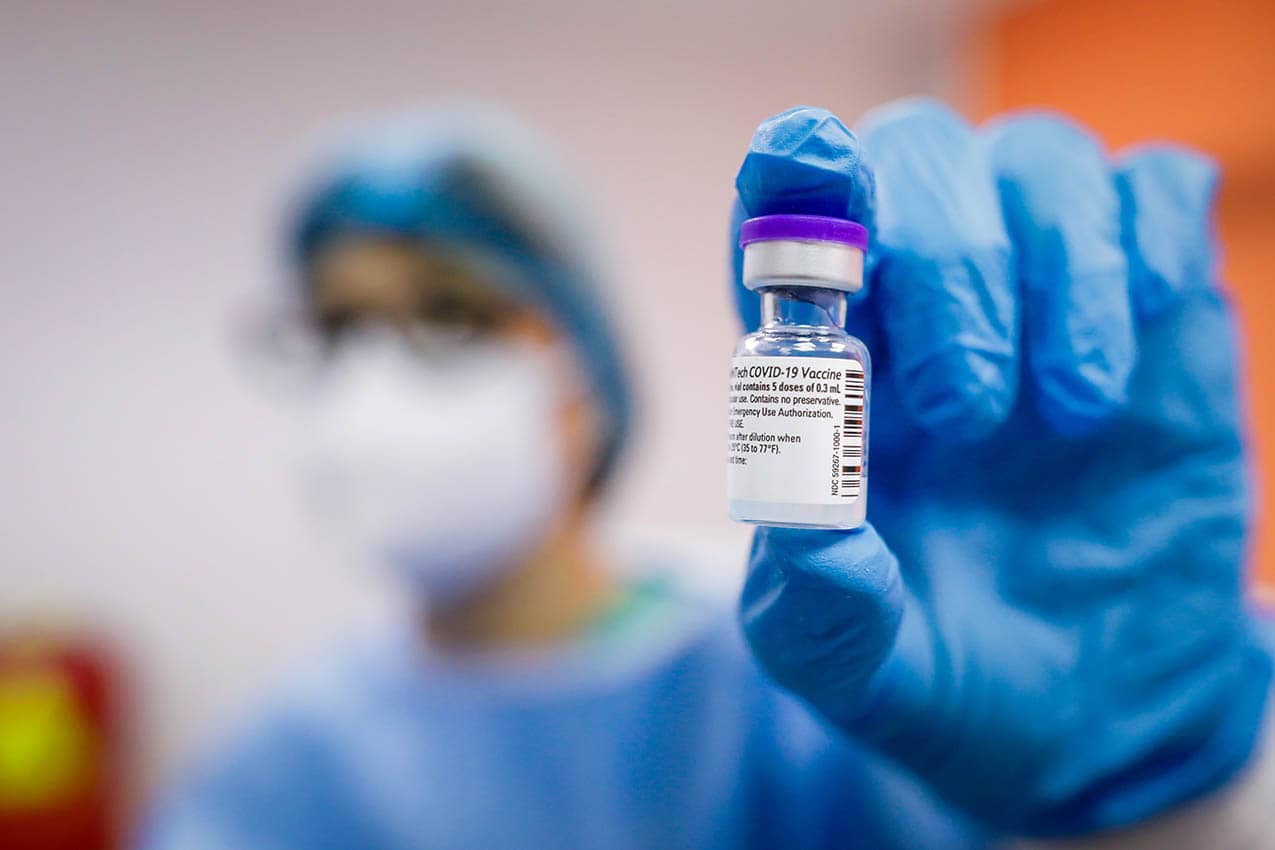 UBS and Credit Suisse told clients at the start of the new month that developments concerning the pandemic lead them to raise their forecasts for the Pound-to-Euro exchange rate (GBP/EUR), with one analyst saying a move to 1.20 is now visible on the horizon.

Shahab Jalinoos, Global Head of FX Strategy at Credit Suisse says the UK’s vaccination success has been the central, persistent pillar of their constructive view on Pound Sterling relative to the Euro in 2021.

"Markets understood some time ago that a divergence in vaccination success was likely," says Jalinoos in a new research briefing to clients ahead of the second quarter of the year.

The call comes as the latest official data out of the UK shows 646,828 vaccine doses were administered on March 31, with 188,045 of these being first shots.

Over 45% of the total population have now received at least one dose of the vaccine, which contrasts to 11.61% in the European Union.

European Union countries have meanwhile seen rising case rates of Covid-19 through March leading to the bloc's largest countries to impose fresh restrictions on citizens, with France on March 31 announcing a new three week lockdown that would also include the closing of schools.

"COVID-19 restrictions on both sides of the channel have been, and will continue to, dominate sentiment toward the pound and the euro," says Thomas Flury, Strategist at UBS.

By contrast, the UK remains on course to steady unlock, with a major easing of restrictions falling due on April 12 when non-essential retail and some hospitality businesses reopen.

"The success of the vaccination program in the UK puts it on track to emerge from the pandemic restrictions in the coming months. In the EU, there may be a slight delay to previous plans," says Flury. 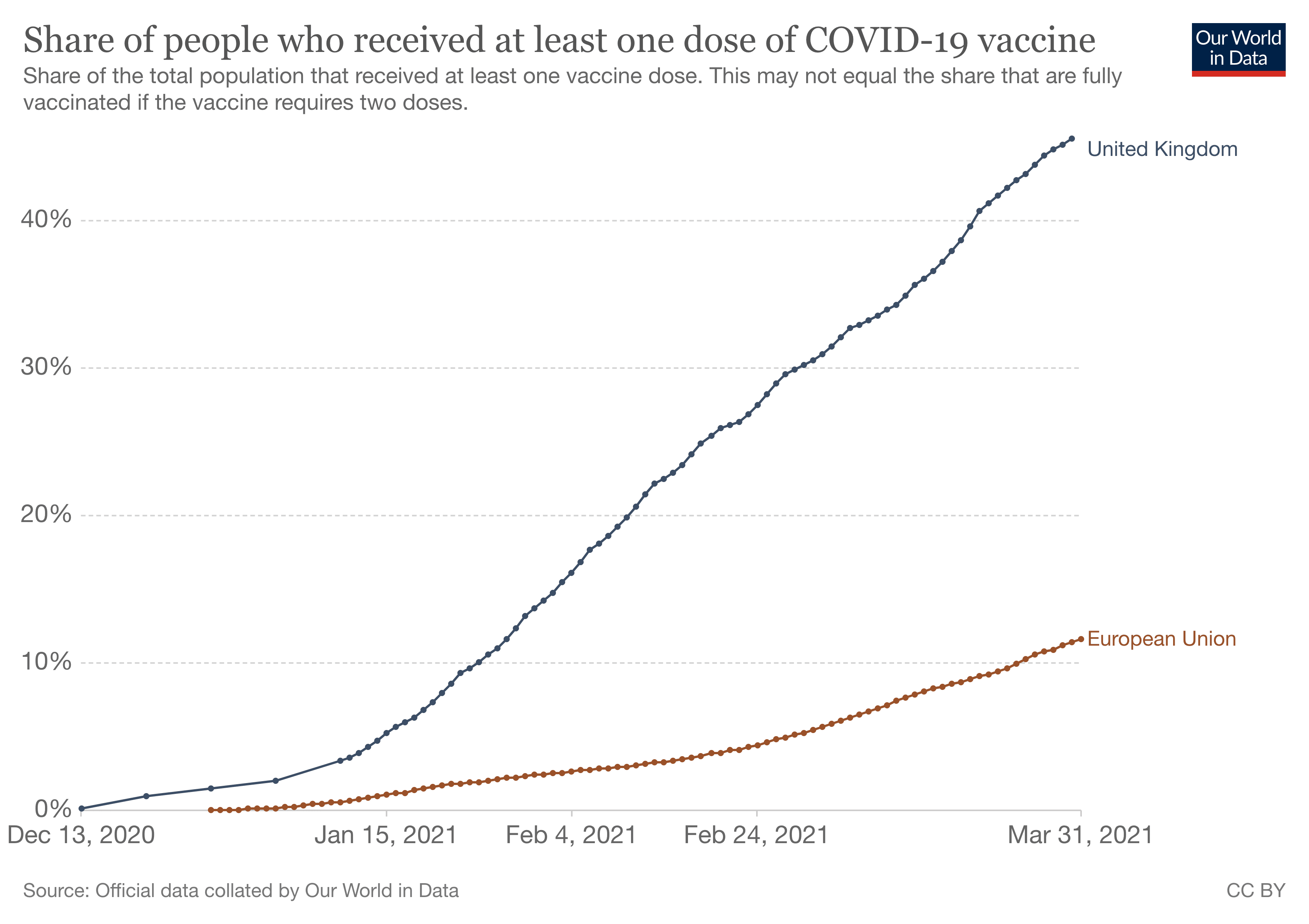 The developments on vaccinations and changes to restrictions come amidst a steady continuation of Pound Sterling's advance against the Euro, which has left the Pound-to-Euro exchange rate 5.0% higher in 2021 at the turn of the month.

Jalinoos says the Euro looked pricey at the start of the year and the Pound looked "cheap", suggesting valuations were already favourable to a rise in GBP/EUR.

"It has taken many weeks for the pair to move towards levels that more realistically reflect at least the relative cyclical picture between the two economies, even if GBP remains potentially plagued by longer-term structural failings," says Jalinoos.

The UK's vaccine advantage now means well over half the adult population have been vaccinated meaning herd immunity - tentatively believed to be in the 60%-70% region - is not far off when those who have already caught the virus are considered.

The UK is now subject to a steady and consistent fall in cases, hospitalisations and deaths caused by Covid-19.

Data meanwhile shows the outbreak in France is now worse than in almost all other countries in the Eurozone, the number of daily cases is approaching the peak of the second wave with a daily average of 75 recorded infections per 100K people around November 09.

Economists say the new lockdown in France will deal a hefty blow to the country's economic output, with economists at Berenberg Bank estimating the economy will operation at 7.0% below normal over the next three weeks.

"The emergence of a third wave of the COVID-19 virus across swathes of continental Europe, and delays to the vaccine rollout, will mean that restrictions remain in place for longer, delaying the anticipated economic recovery until later in the second quarter. By contrast, the situation in the UK is proceeded as
planned, and it remains likely that the country will emerge from the pandemic restrictions in line with the government's timetable.

Looking ahead, Credit Suisse says the underlying argument for relative growth divergence for the Eurozone and UK economies hasn’t changed and if anything it's become still stronger in favour of the Pound.

The handling of the much-criticised vaccine rollout in the EU and related export banks could meanwhile have unintended and negative consequences for business sentiment in the bloc, which could add further downside weight on the Euro.

"Dire warnings of second-dose vaccine shortages in the UK from senior EU politicians like French foreign minister Le Drian appear like sour grapes from the seeming losers in what has turned out to look very much like a 'vaccine war' between the EU and the UK, with bitterness linked to the Brexit divorce clearly fresh in many psyches," says Jalinoos.

Le Drian said on March 26 that the UK will struggle to source second Covid vaccines but that Brussels would not be "blackmailed" into exporting doses to solve the problem.

"The UK is proud to have vaccinated many people with the first dose, but they will have a problem with the second dose," Le Drian said. "And we are fully vaccinated with two doses, not one. Today we have the same number of fully vaccinated people in France and the United Kingdom."

Jalinoos says the comments bestow an impression of petty negativity towards the UK, which "only causes further loss of confidence in its ruling political class that many feel should really be focused instead on getting its own vaccination game right".

"This only adds to reasons to mark down EU animal spirits and by extension EUR prospects," he says.

The call comes at the start of April, which is noted by analysts to be a traditionally strong month for the Pound on a seasonal basis.

"We note that April tends to be a seasonally positive month for GBP, which many link to dividend payments by UK companies in that month, many of which have overseas operations and therefore repatriate funds in order to make these payments," says Jalinoos.

UBS have lowered their end-June and end-September EUR/GBP forecast to 0.85 from 0.88 previously, their year-end target is lowered to 0.84 from 0.87.