The British Pound swung between gains and losses at the start of a new week that will welcome both a new month and quarter and therefore promises a volatile week of trading, although analysts note April is traditionally a strong month for the UK currency.

Volatility was on display heading into Tuesday after a decisively strong start to the week for Sterling ultimately gave way to losses in some major exchange rates.

Eyes were on the Pound-to-Euro exchange rate (GBP/EUR) in particular as it advanced to a new 13-month high of 1.1754 before gains were ultimately relinquished.

This volatility could well be a feature of coming days and might provide boatloads of frustration for those watching Sterling exchange rates with an eye to making a transaction.

"This week also brings with it the start of a new month and a new quarter, which brings an additional risk of erratic trading conditions. Portfolio rebalancing combined with reduced liquidity, could trigger increased volatility in currency markets," says George Vessey, a strategist with Western Union Business Solutions. 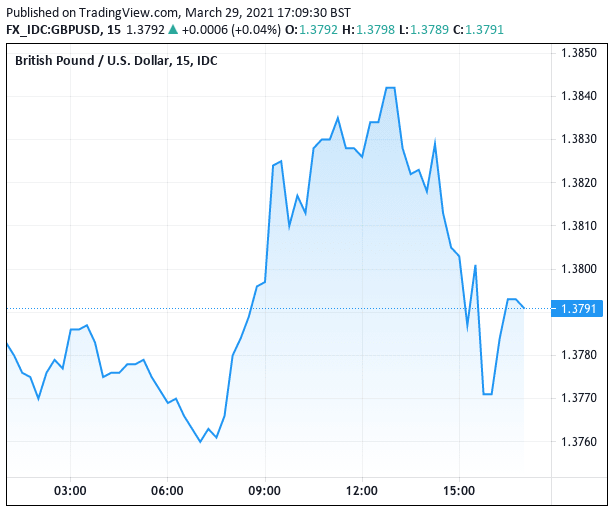 Above: GBP volatility was on display at the start of the new week.

A true reflection of the Pound's standing in global markets will therefore only likely become evident on Thursday when the month-end noise evaporates.

Sterling near-term momentum is nevertheless turning increasingly constructive as investors appear to be taking a more optimistic view on the UK and its currency, with data showing significant improvements in demand for UK-based assets of late.

The demand for UK assets comes after the eradication of Brexit-related risks and the country's slow but confident progress towards a covid-free future owing to a strong vaccination programme.

"International inflows into the UK have rebounded sharply following the signing of the Brexit deal. Whether these flows come too early for the balance of payments data which will be released later this week remains to be seen. But for now, foreign participation in both the gilt and UK equity markets (stock buying or M&A) continue to provide near-term support for GBP," says Kamal Sharma, an analyst at Bank of America.

According to Bank of America analysis, the buying of UK government bonds (gilts) by foreigners showed a strong bounce in February, rising by £15BN.

The demand for gilts in February 2021 was the single largest of any February, surpassing the previous February record set in 2009 as investors returned to UK assets having abandoned them during the Great Financial Crisis of 2008.

Bank of America note that the Merger & Acquisition pipeline since the start of the year has meanwhile been the strongest since 2015.

"Heading into what is traditionally the strongest seasonal month for GBP, we reiterate that the risks to our GBP forecasts lay to the upside, particularly versus the low yielders: CHF, JPY and EUR," says Sharma.

As mentioned, volatility is likely to be elevated over coming days but foreign exchange analysts at Barclays say they are tipping the Pound to end the week higher than where it started.

"We expect the GBP to recover this week," says Ashish Agrawal, an analyst with Barclays.

In particular, the Pound could see improvement against the Euro given the spike in covid-19 infections currently gripping the continent and leading economists to predict the region's rebound will be delayed by a number of months.

"Amongst the majors, we expect EUR to underperform other G10 currencies, due mainly to the euro area's sluggish economic recovery. Even if the euro area manages to contain COVID-19, its economic recovery will be capped by low potential growth," says Ashish Agrawal, an analyst with Barclays.

Jordan Rochester, a foreign exchange strategist at investment bank Nomura says April is historically a good month for the Pound.

"April starts with a good month for selling the USD, with GBP, NZD and NOK generally the outperformers," says Rochester in a client briefing. "There should be support to keep GBP’s uptrend intact."

Data from Nomura shows Sterling has gone higher in 81% of all the Aprils since 2000. 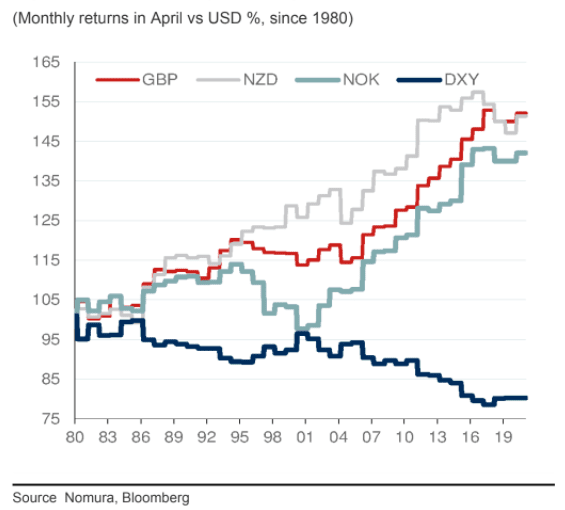 Rochester says trying to divine a reason for the Pound's traditionally strong April is difficult and there is no single factor to pin the performance on.

"April does seem to be historically strong for the UK, with the FTSE All Share up on average 2.2% with a hit ratio of 80%," he says.

Bloomberg reported in 2018 that the strong performance was due to dividend payments to British shareholders
from foreign companies and other investment inflows that mark the start of the UK financial year.

"But FX markets have a sense of irony – 2018, when the Bloomberg article was written, had one of the worst Aprils since 2004. GBP’s performance was strong for two weeks, but then a turn lower in the UK data and a broad USD recovery made it the first April in a long time when GBP underperformed," says Rochester.

Nomura are 'long' Pound Sterling for reasons other than seasonality which include real rates, equity inflows and the recent UK budget with corporation tax deduction reforms.