The Krone tumbled on Tuesday but remained a leading contender for outperformance in 2021, according to analysts at Nordea Markets, Goldman Sachs and HSBC among others, who cite the likelihood of Norges Bank interest rate rises this summer for upgraded or otherwise simply bullish forecasts.

Norway's Krone was knee-deep in intraday losses alongside stocks and commodities including oil on Tuesday, but it continued to carry 2021 gains over most other majors and is increasingly the subject of forecast upgrades following a favourable evolution of the Norwegian interest rate outlook.

"Now that the Norges Bank meeting is behind us, developments in the stock markets and oil prices will again be key for NOK – at least until June when Norges Bank is due to publish a new rate path," says Dane Cekov, an FX and rates strategist at Nordea Markets. "We hold our view for EURNOK coming below 10.00 by the summer."

Norges Bank policymakers are becoming more optimistic about the outlook for their economy and what is commonly referenced as one of the world's wealthiest countries, with having staged a robust rebound in recent quarters, leading rate setters in Oslo to begin preparing markets for an interest rate rise as soon as September 2021.

That would make Norway the first major economy to lift its cash rate following the great leveller of borrowing costs that has been the coronavirus pandemic. This is in turn positioning the Krone as a prime contender for leader of the major currency pack, not least because no other major economy's central bank is expected to raise rates that soon.

"A number of key macro catalysts have aligned to reinforce NOK’s strong fundamentals. Most notably, Norges Bank laid out a very different policy view than the Fed," says Sara Grut, a global FX strategist at Goldman Sachs. "We think the return of differentiation will continue to drive NOK outperformance." 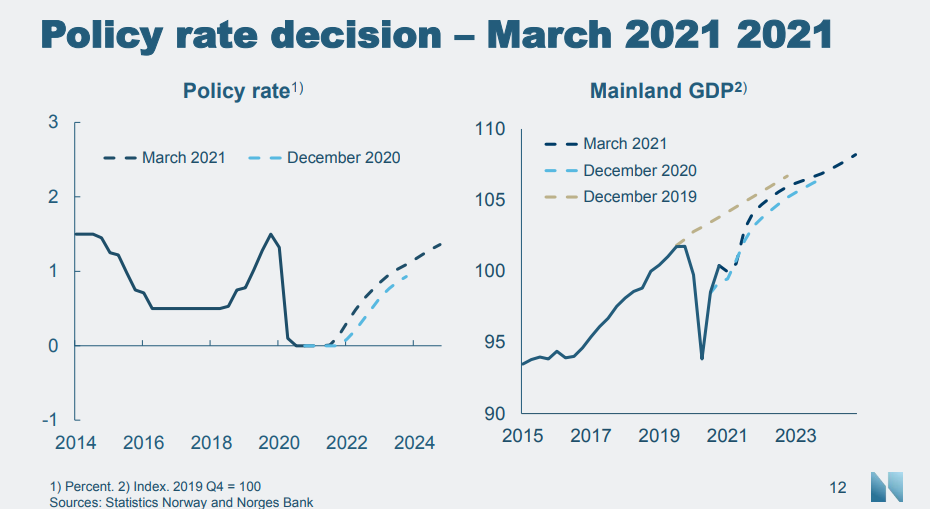 Goldman Sachs forecasts suggest USD/NOK will fall to 8.19 over a six-month horizon, which is -4.3% from Tuesday's 8.56 by the time September's Norges Bank decision is unveiled, although the Krone is expected to build further momentum in 2022. This is expected to push USD/NOK back to 7.73 and its lowest level since early 2018 within the next 12-months. That would be close to the Krone's highest level since before the oil price collapse that began in 2014.

Standing in the way of a rate hike this March and for the time being are rising coronavirus infection numbers and "strict containment measures," but with health authorities advising that a good chunk of the adult population could be vaccinated by summer, the Norges Bank is now turning its attention to upside risks to its inflation target. Inflation rose above the bank's 2% target in January and reached 3.3% last month, commanding in the process a combination of stronger exchange rates and a rising cash rate.

"The economic performance of Norway is likely to be very strong this year. Norway is also starting off from a stronger footing, after seeing less bruising in terms of GDP than many of its developed counterparts," says Paul Mackel, global head of FX research at HSBC, in a note before last week's Norges Bank statement. "All of this means that the Norges Bank can position itself to hike rates in the near future, without needing to fear the possible consequences on an economy that should be above pre-pandemic levels by the end of the year. If anything, we think risks for the economic outlook are tilted to the upside, which may see the Norges Bank act even faster."

Rising interest rates make a compelling case for outperformance by any currency but especially the commodity-backed Krone in the current market where resource prices are widely expected to advance further in the year ahead while many other central bank cash rates sit at zero or below. Any 2021 interest rate rise in Norway would see the Norges Bank well and truly firing a starting pistol on a period of divergence between central bank policy rates or outlooks that's sure to get the attention of investors. 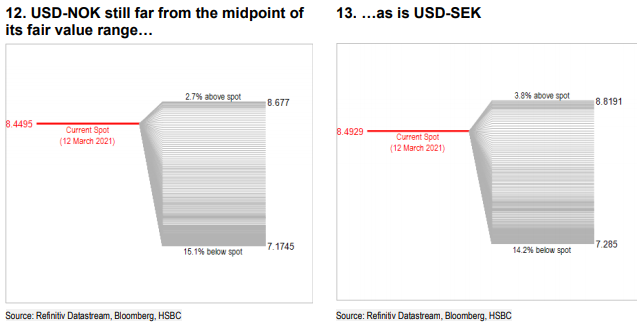 "This will likely feed into a stronger NOK over the coming months, given that other central banks, including the Riksbank, remain extremely dovish," Mackel says. "We believe that the positives around the NOK are not fully priced in by the market. As Chart 12 shows, USD-NOK is at the upper bound of its fair value range and is even higher than that of USD-SEK’s. This strikes us as out of place considering how Norway edges out Sweden in multiple aspects, and the pace of monetary policy normalisation is likely to be much faster than that of Sweden’s."

Mackel and the HSBC team say NOK/SEK is likely to be the clearest example of policy divergence as the Sveriges Riksbank faces downside risks to its inflation target that are likely to ensure a 'dovish' policy stance, and throughout the period in which Norges Bank policymakers are likely to bee seen raising interest rates. But NOK/SEK isn't by any stretch the only Norwegian exchange rate where a strong performance is expected.

Since soon after the onset of the pandemic exchange rates have been dictated almost entirely by their sensitivity to movements in stock markets and commodity prices, but this is changing, with differentiation between central banks and bond yields expected to play an increasingly prominent role ahead. This theme has already made a mark on bond markets elsewhere and shaken up the major currency rankings previously but with the Norges Bank raising the incentives for outperformance by the Krone, divergence is tipped to favour of the Norwegian unit more than others.

"The Bank has established a reputation for doing what it says and so you do not need to be a cryptic crossword enthusiast to deduce its intentions," says David Oxley at Capital Economics. "We suspect that Norwegian policymakers will raise interest rates sooner and faster than they project." 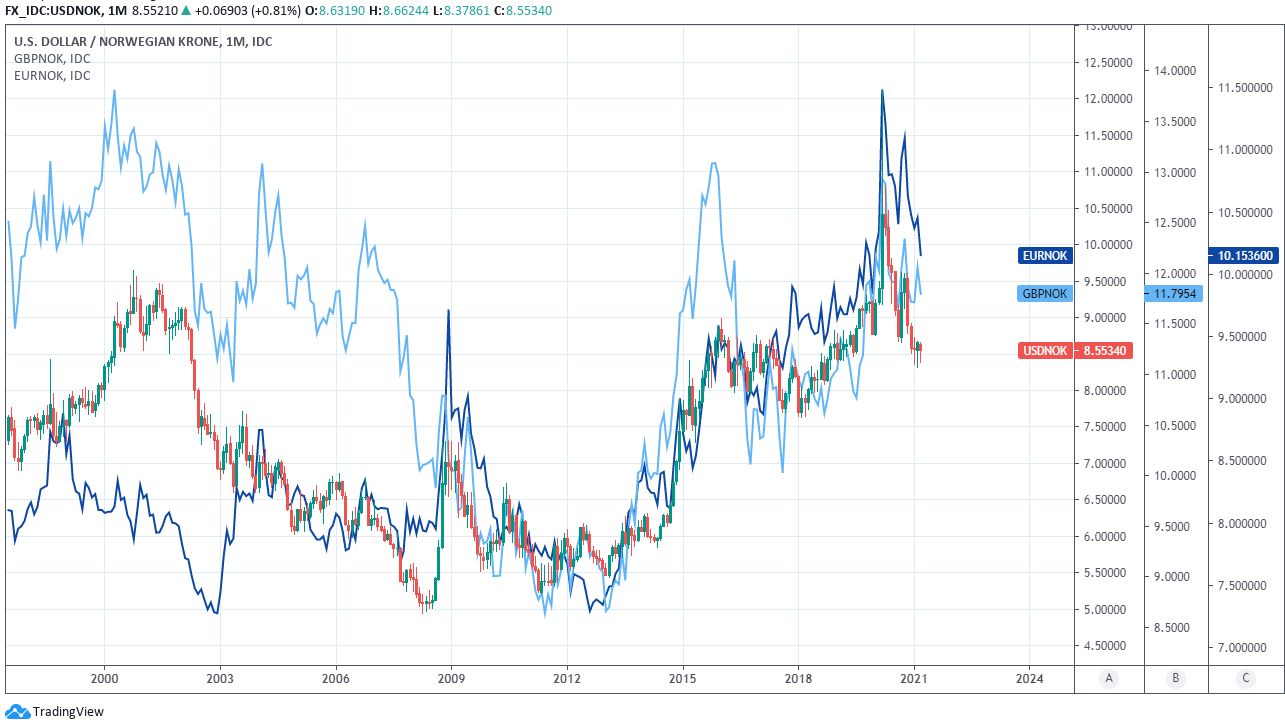