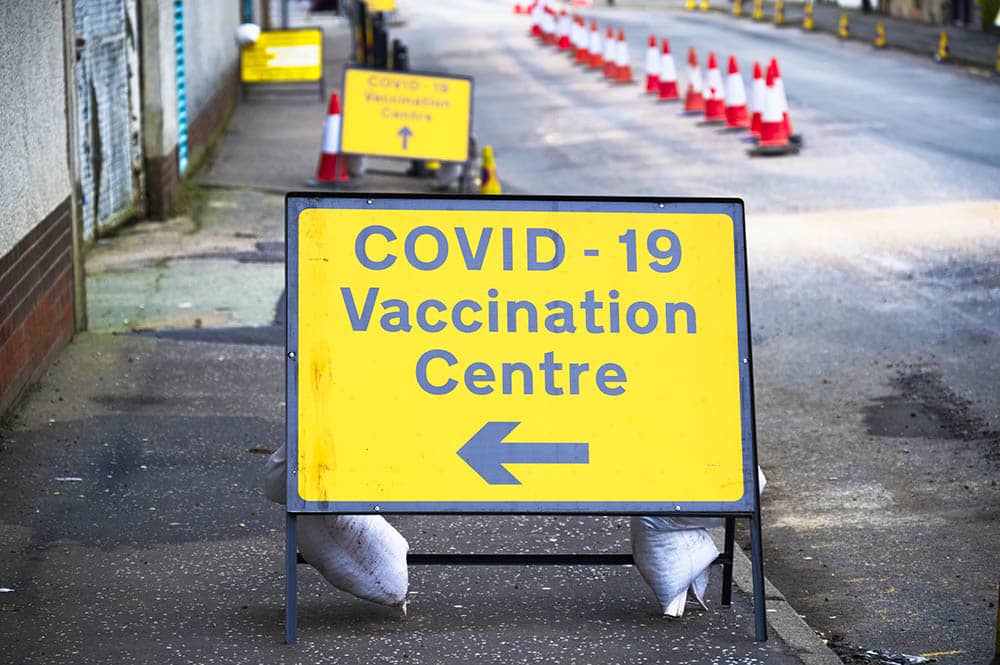 The UK government will be able to bring forward its reopening plans for the economy as the vaccination programme is set to reach a tipping-point say analysts at a major investment bank, a development which could aid further gains in Pound Sterling.

Analysts at Nordea Bank's markets division say a key threshold any vaccination programme must achieve in order to effectively tip the course of the pandemic is about 35% of the adult population.

They believe this is a milestone the UK is likely to achieve ahead of other major economies.

"The UK will soon reach a key threshold in the vaccination process, which will allow for a quicker than anticipated re-opening," says Andreas Steno Larsen, an analyst with Nordea Markets. "The US will soon follow, while continental Europe will lag behind." 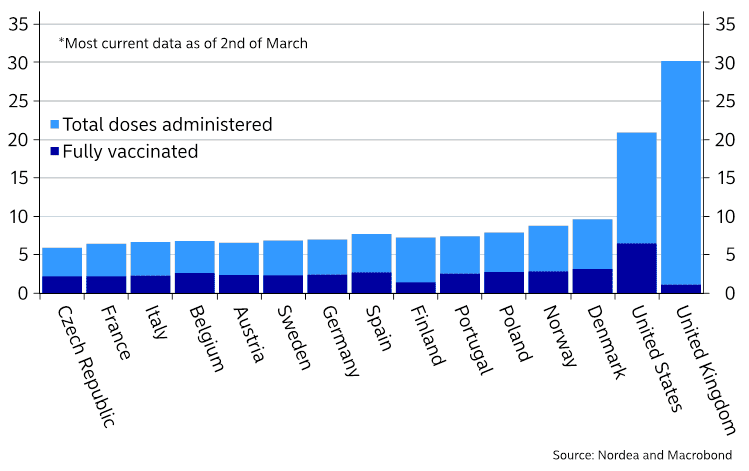 Analysts at the Scanadanavian lender and investment bank have looked at Israeli data to build a template for the rest of the world, given that country's rapid rollout programme.

The data suggests to them that 35-37% of the population needs to be vaccinated before a major breakthrough is seen.

"The UK will soon hit this benchmark, while the US and efficient EU countries will reach this benchmark in early April," says Larsen.

He says the major economies will therefore be without (most) restrictions sooner than markets anticipate.

"The UK will likely soon move towards a swift reopening, US will follow around Easter, while continental Europe will follow in early May," says Larsen.

"With 31% vaccinated and (maybe) 20% with immunity from prior infection, the UK is well on the way to herd immunity. R well below 1," says Ian Shepherdson, Chief Economist at Pantheon Macroeconomics.

The below chart from Nordea Markets shows that at about the 35-37% vaccination threshold the trajectory of the pandemic turns terminal: 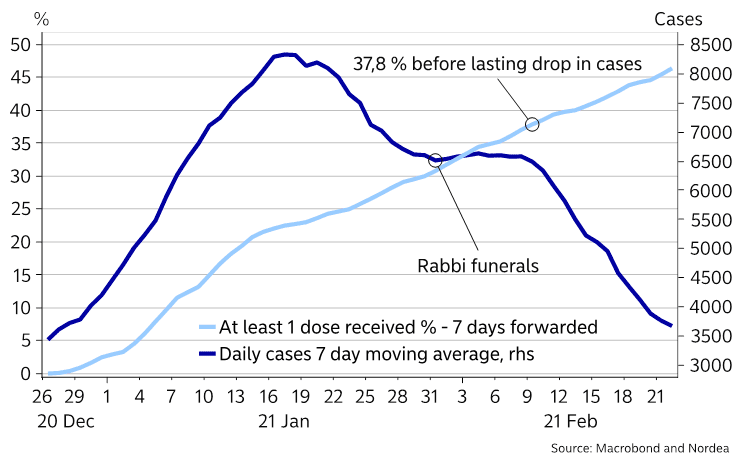 Foreign exchange analysts have steadily come around to the view that the UK's vaccination advantage over other countries and regions, the EU in particular, has been a contributor to Sterling's strong performance in 2021.

"A lacking supply of vaccines and a sluggish efficiency in administering of said supply leaves the EU as a whole far behind its peers in the UK and the US. Swifter approvals of vaccines, smarter wordings of contracts with suppliers and more funding given to the R&D phase, leaves the UK and US clearly ahead of the EU on the supply front," says Larsen.

"Many positives are in the price of the overvalued and overbought GBP in our view," says Valentin Marinov, an analyst with Crédit Agricole. "The GBP has little else to offer beyond its apparent vaccine advantage."

"In terms of thematic drivers, we note that the UK's solid progress on the vaccine front will support a growth rebound from Q2, while the lingering risks from a bad Brexit and negative policy rates have dissipated. At current levels, GBP has priced that in, while positioning looks extreme," says Mark McCormick, a strategist with TD Securities. (Read: Pricey Pound a Sell against the Euro and Norwegian Krone at TD Securities).

But should the UK start bringing forward its reopening plans the economy could conceivably start to recover quicker, and provide a fresh potential impulse to Sterling exchange rates.

Currently the government is pursuing a cautious approach to reopening with schools expected to reopen on March 08 and the all restrictions expected to be dropped by March 21.

"We think that the UK government would err on the side of caution with regards to exiting the lockdown, and this much could disappoint the GBP bulls," says Marinov.

The UK government has said explicitly that it will lift restrictions based on "data not dates", and therefore good news for Sterling rests with ministers reacting to good news in the data. 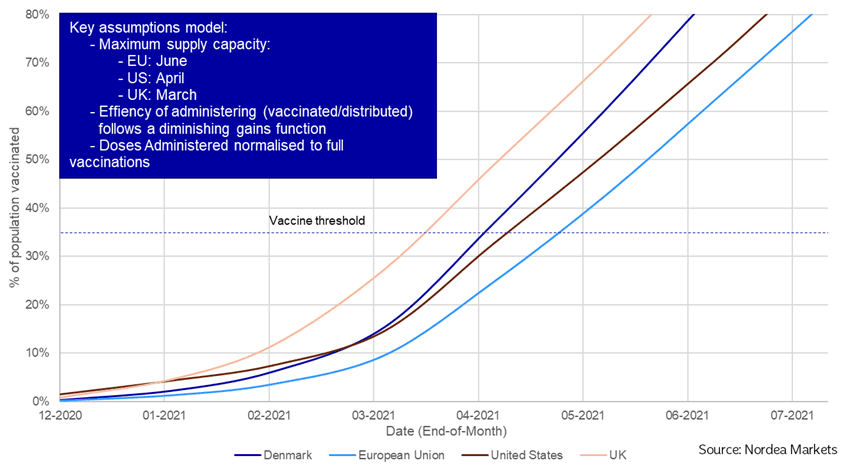 Above: The UK will reach the reopening vaccine threshold very soon, while efficient EU countries and US will be able to re-open a lot during early parts of April.

"The UK has opted to vaccinate as broad a part of the population as quickly as possible by delaying the second dose up to 12 weeks, and currently, the most recent studies recommend this approach," says Larsen.

Nordea cite a research report from Oxford University that suggests countries could essentially achieve substantial collective immunity towards the corona virus much faster, if the focus shifted to the UK's one-dose strategy.

Data shows a strong vaccine effect already away in England where the fall in Covid-29 deaths is running around three weeks ahead of modelling estimates: 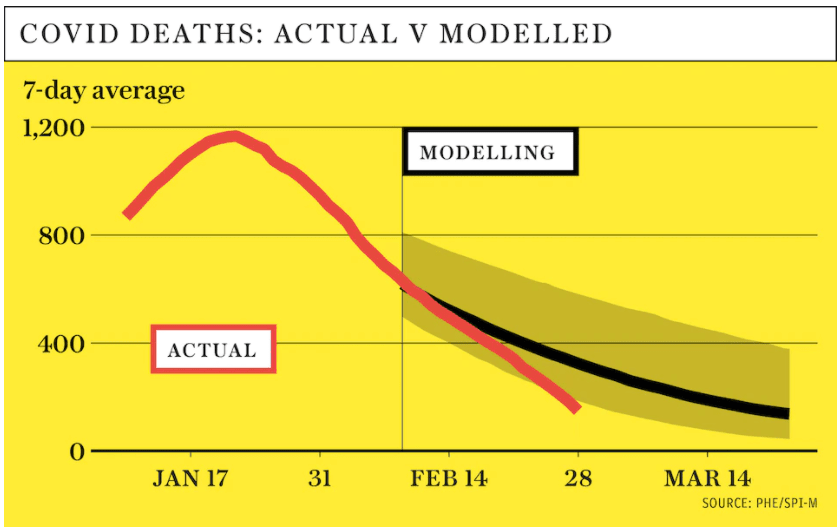 Image courtesy of The Telegraph

The most recent Scientific Pandemic Influenza Modelling group (SPI-M) projections were produced on February 10 and were pivotal in developing the Government's roadmap out of restrictions, according to The Telegraph.

The midpoint projections estimated that deaths in England would not fall below 200 a day until around mid-March, but that point was reached on February 25.

Mark Woolhouse, a professor of infectious disease epidemiology at the University of Edinburgh and a member of SPI-M, told the Telegraph: "The data are indeed looking better than the models were predicting and – to the best of my knowledge – better than anyone was expecting."