The Pound notched up further gains over all majors except high-yielding commodity currencies Friday as a solid week draws to a close, but earlier price action suggests that Sterling and the Euro may also now be positioned to act as something like safe-havens in bouts of bad weather for the markets.

Sterling ceded ground to the Australian, Canadian and New Zealand Dollars on Friday as global stock and commodity markets climbed following what has otherwise been a mixed week for risk assets, which has left many stock markets on course to end the period carrying losses despite last minute recovery rallies.

The S&P 500 and NASDAQ were on course to end the week lower and so too was Germany's DAX index and Switzerland's SMI, while the TSX in Canada and ASX in Australia were also both still underwater for the period. Meanwhile, the U.S. Dollar and precious metals like gold and silver were mixed too.

"The ongoing move higher in long-term US yields is offering little support for the USD which continues to underperform against commodity-related G10 FX and the GBP. Risk assets remain resilient so far to rising yields," says Derek Halpenny, head of research, global markets EMEA and international securities at MUFG and buyer of GBP/USD since 1.3725 in January. "GBP’s current strong bullish momentum suggests further near-term gains. A break above the 1.4000-level could open the door to a retest of the April 2018 high at 1.4377. The government’s plan to ease restrictions on Monday poses downside risks."

Sterling has taken the major currency space by storm this week with gains over all even after a strong rally to open the February month.

"The relatively subdued [EUR/GBP] price action on the topside is encouraging for medium-term GBP bulls, particularly in the face of weak retail spending data from the UK. Moreover, the pair experienced declines this week in spite of periods of general risk-off in equity markets. As such, there is blossoming evidence that the GBP's positive correlation with risk assets is breaking down somewhat (i.e. fundamentals are driving the GBP)," says Stephen Gallo, European head of FX strategy at BMO Capital Markets. "We target an eventual move into the 0.830s [GBP/EUR: 1.20+]."

Gallo says these and other factors are likely to lift Sterling to 1.20 against the Euro, which would put pre-referendum levels in sight and potentially within arm's reach. Britain's position in the vaccination race and an ebbing away of 'no deal' Brexit risk is often cited for Sterling's outperformance.

"With new Covid-19 cases and hospitalisations falling across a number of countries, attention is increasingly turning towards the easing of lockdown restrictions. That includes the UK, where PM Johnson is set to unveil an easing ‘roadmap’ for England on Monday. He has already said he intends to be “cautious and prudent and will be “data, rather than date” driven," says Rhys Herbert, a senior economist at Lloyds Commercial Banking. "That suggests the plan will be short on specific dates. Media reports say that after the reopening of schools on 8th March it will be suggested that further restrictions may be eased at four-weekly intervals with the intention of near normality by July." 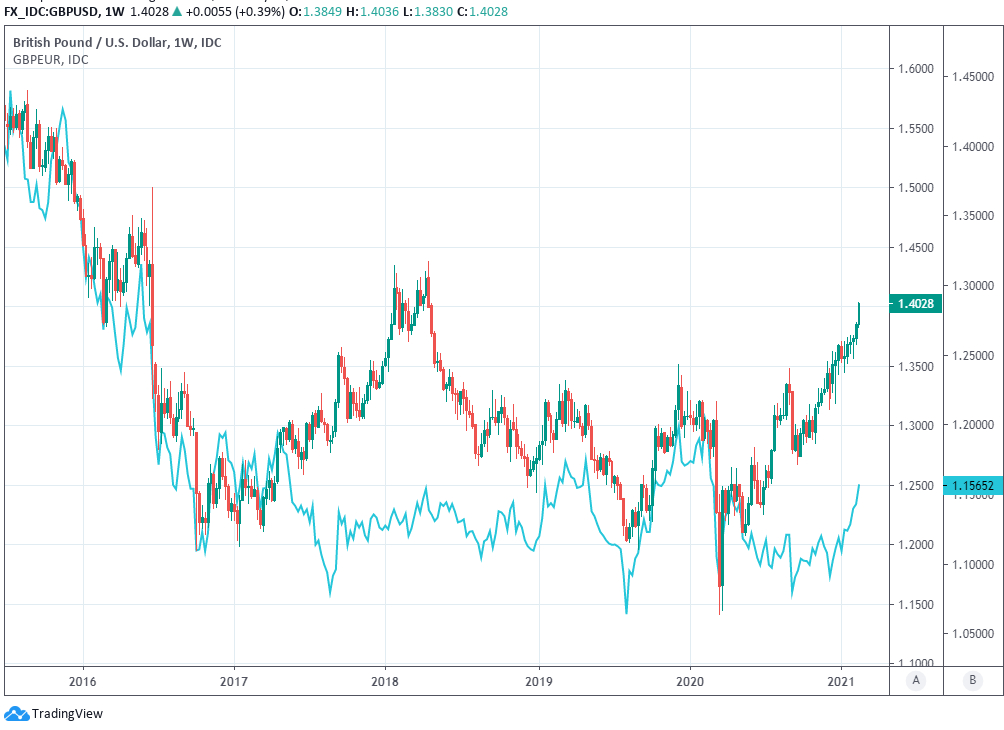 This may all be in focus for investors again next week when the government is set to unveil its plan for unlocking residents as well as the economy.

"The sharp fall in retail sales suggested that January’s lockdown hit the economy harder than November’s. But at least it doesn’t look like things deteriorated further in February. It’s only when the lockdown is eased, potentially from March, that the economy will really start to recover. A rapid economic recovery in the second half of the year should give gilt yields, sterling and the FTSE 100 a further push up," says Thomas Pugh at Capital Economics.

Investors' attraction to Sterling endured Friday despite a mixed bag of UK economic data, with the largest fall in retail sales since April 2021 coming just ahead of IHS Markit PMI surveys that painted a more upbeat picture.

January's -8.2% fall was the largest since the first full month of 'lockdown' last April but the services PMI rose from 39.5 to 49.7, further than the 42.1 expected, and the manufacturing PMI rose when consensus looked for a fall. 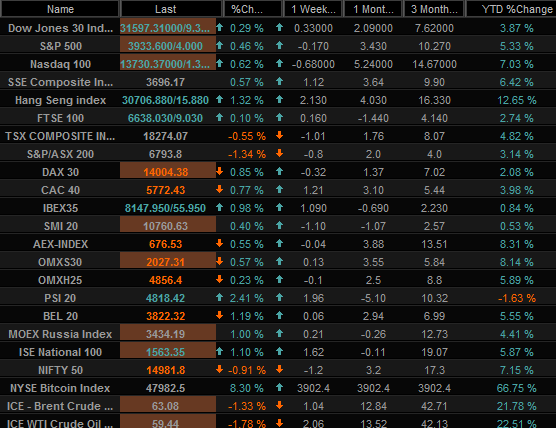 "During the last 5-year period, the GBP has not been a key beneficiary of the steady decline in the USD’s share of global FX reserves. There is scope for this to change, particularly if the USD’s share continues to drop, or if reserve managers reduce their allocations to ultra-low-rate currencies such as the JPY or the EUR," BMO's Gallo writes in a recent review of the bank's forecasts. "Over the last 5 years there has also been an evolution in the foreign official ownership of UK assets to the point where assets other than gilts (cash, equities, money market securities etc.) occupy a 75% share (right chart below)."

Increased accumulation and repositioning of FX reserves by central banks has also been a lesser cited and possibly underappreciated influence on Sterling, whose popularity here may also be connected to confidence among Bank of England (BoE) policymakers in their ability to reach the UK's inflation target.

The BoE came across as 'hawkish' in its assessment of the outlook on February 04 when markets had anticipated a 'dovish' statement and warning that subzero interest rates could be imminent. Meanwhile, many central banks are believed to have been either accumulating or simply repositioning some of their foreign exchange reserves of late, notably those in emerging markets where exchange rates rose strongly in the latter half of last year.

Threadneedle Street's stance on the UK recovery outlook and all it may mean for attainment of the inflation target is potentially salient because it means that inbound flows are not quite as impeding of policy objectives as they would be if directed elsewhere at present.

Central banks do after all target what are generally, and in the developed world at least, 2% levels of annual inflation over the medium-term. Rising exchange rates impede attainment of these objectives by cheapening the cost of imports. Frequent remarks made by the European Central Bank (ECB) since last September demonstrate well that although certain levels are not targeted by policymakers themselves; the trajectory and pace of movements in exchange rates do matter in the policymaking process.

"GBP FX and rates markets have been dominating over the past week, with Gilt yields dragging European yields higher and GBP probably providing support to EUR/USD. GBP/CHF is now above 1.25 and well on the way to the 1.30 we had highlighted in our 2021 FX outlook ‘Back on Track’. With equity investors still underweight UK equities, we see this rotation into the UK and GBP having further to run. Below 0.8670 support, EUR/GBP losses could extend further," says Petr Krpata, chief EMEA strategist for FX and interest rates at ING. "We had felt 1.2050 might be the EUR/USD low this week. So far it has been 1.2023, but with the US retail sales and FOMC minutes now out of the way and commodities markets bid/reflation theme still with us, let’s see if EUR/USD can now drift back to the 1.2150/70 area."

Krpata notes it's not necessarily a coincidence that since the Pound-Dollar rate lifted the Pound-Euro rate sharply, EUR/USD has also stabilised.

Meanwhile, this week's price action in GBP/USD and EUR/USD could be indicative of current as well as future potential to act as harbours of safety during bouts of bad weather in the stock and commodity markets.

This by implication indicates a lesser or simply waning propensity for the U.S. Dollar to also act as a so-called safe-haven. 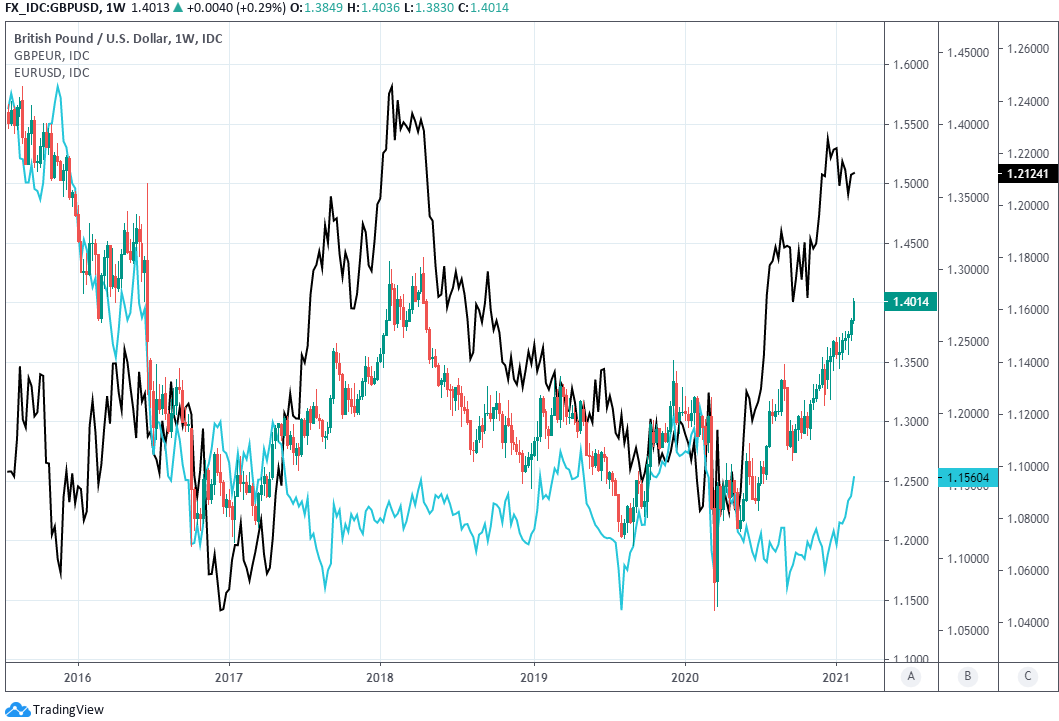