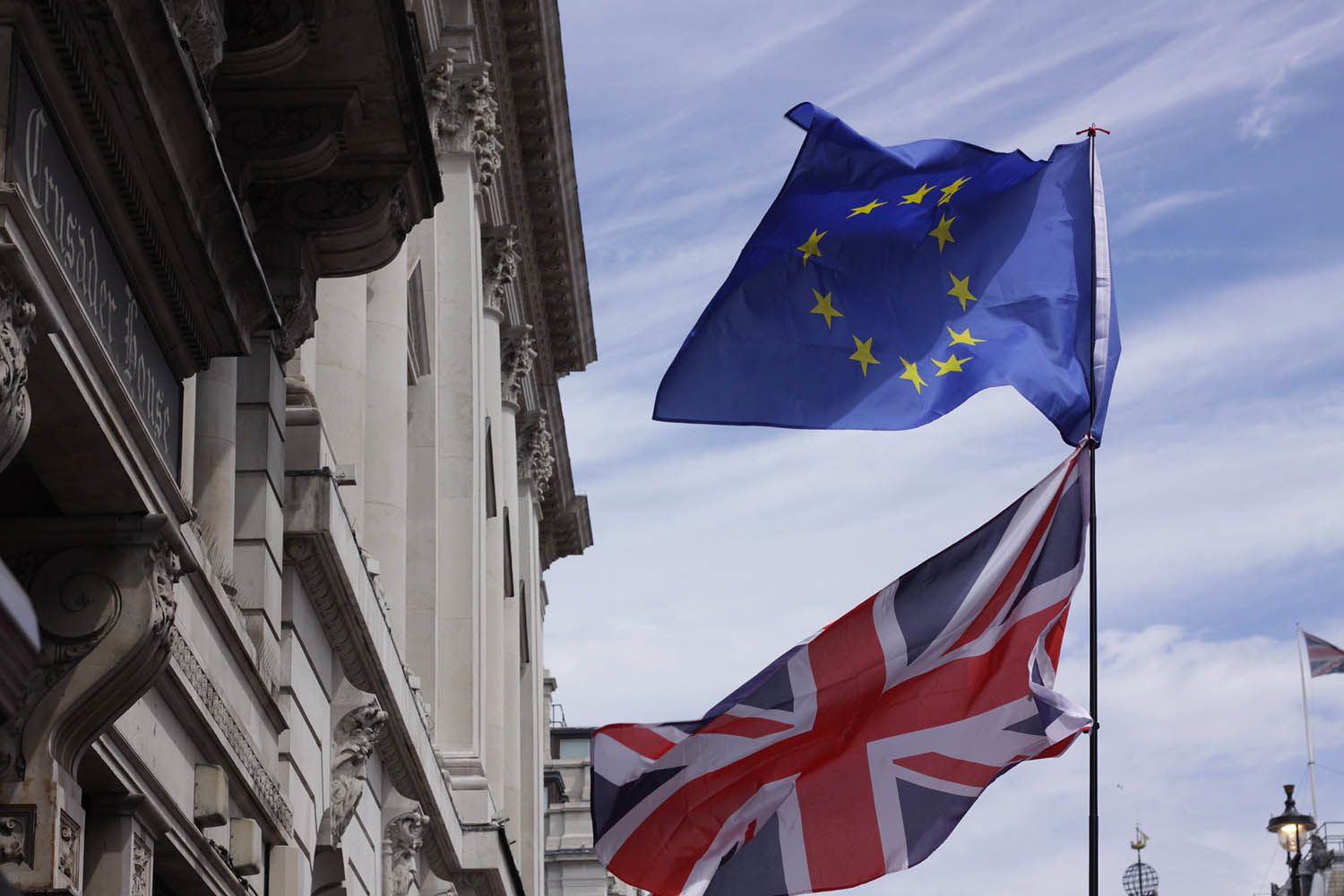 Volatile is the word of the day for the British Pound, which dropped sharply only to recovery in an equally sharpish fashion on a string of unofficial reports concerning this week's Brexit negotiations.

The currency rallied off its daily lows after a Financial Times report revealed negotiators are happy enough with the progress made in the final round of negotiations to enter what is known as a 'tunnel period', which is a final push conducted in secret where the outstanding details are overcome and a draft for leaders to assess is produced.

"Despite the EU launching legal proceedings against the UK over the internal market bill, officials in London are increasingly optimistic a Brexit deal," says Sebastian Payne, Whitehall reported at the Financial Times. Payne quotes an official as saying: "We’ve gone from about 30% chance of a deal to the other way around. I think it’s almost certain we’ll enter the tunnel."

"Officials with knowledge of the talks say a landing zone on state aid has been identified but “fishing is the last sticking point. We both have to jump together,” adds Payne.

He adds the mood in Whitehall is “cautiously optimistic” but says his sources warn "it’s going to go to the brink."

The story is just the latest in a string of unofficial briefings to various journalists on the state of talks, but these briefings are being closely watched by foreign exchange markets.

However, just to underpin how volatile the currency is, Sterling then reversed after a newswire carried a report that an EU official refuted the FT report, stating there is no sign of a landing zone with the UK of the issue of fisheries and level playing field.

The reaction of the market to this update is viewed in the below chart: 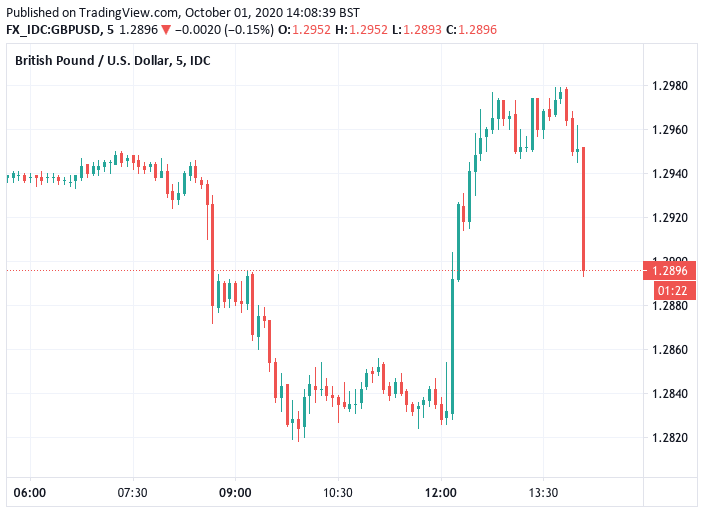 The British Pound was jolted lower against the Euro, Dollar and all its major peers earlier in the day after a bubble of optimism surrounding Brexit trade negotiations was burst by a report that suggest the EU will not sign a trade deal unless the UK withdraws the Internal Market Bill.

A Reuters report came out saying the UK and EU have failed to narrow differences on State Aid in trade talks and that "a final EU consent is contingent on the Internal Market Bill's withdrawal."

The Internal Market Bill (IMB) had looked to have become less of an issue over recent weeks with the EU accepting the UK's argument that it would only breach the Withdrawal Agreement in the event of no trade deal being reached, however the issue is back in play it would appear.

"Pound sells off hard on Brexit headlines suggesting the UK & EU fail to close differences on state aid & doubts on new trade deal in time. I suggest there is further downside ahead for Sterling on this news," says Neil Jones, who heads the institutional currency sales desk at Mizuho in London.

The European Commission has meanwhile sent a letter of formal notice to the U.K. government, stating it intends to take legal action against the UK for breaching its obligations under the Withdrawal Agreement by pursuing the IMB.

The EU Commission President Ursula von der Leyen has told a press conference in Brussels on Thursday that they are giving the UK a further month to amend the IMB and withdraw the controversial legislation.

"GBP is underperforming across the board. Reports of ongoing Brexit talk impasse and confirmation the European Commission is about to start legal proceeding against the UK for breaching the terms of its withdrawal agreement (via the controversial Internal Market Bill) are weighing on GBP," says Elias Haddad, Senior Currency Strategist at CBA. "In the meantime, this week’s round of Brexit negotiations between the UK and EU end later today. Any sign of a breakthrough in talks will lead to a broad-based relief rally in GBP."

Above: GBP performance on October 01. Is Brexit uncertainty hitting your international payment budget? Find out how you can protect your funds from currency fluctuation, here.

We reported last week that the UK has intentionally slowed the passage of the Bill through Parliament, and it won't make it to the Lords for weeks.

Therefore, it looks like the UK and the EU have all but deferred a final showdown on the matter until after the mid-October EU Council meeting, at which many still expect some sort of trade deal to be agreed.

"The EU has issued the UK a letter of formal notice, and has given the UK one month to respond. This move is largely symbolic. As long as a trade agreement can be reached, then the offensive portions of the Internal Market Bill are moot, and there won't be any reason to progress with the legal action. In any case, it kicks the can down the road by a few more weeks, while any actual legal proceedings would take months (at least) to unfold," says Ned Rumpeltin, European Head of FX Strategy at TD Securities.

The stakes are high, but based on the latest developments a deal is still more likely than not.

UK Prime Minister Boris Johnson has previously stated that the Internal Market Bill will not be withdrawn as it is a safeguard for the UK in the event that the EU and UK fail to seal a trade deal, which could in turn impact negatively on trade between the rest of the UK and Northern Ireland.

But in order for progress towards a final trade deal, "the internal Market Bill would have to be withdrawn," a senior EU diplomat told Reuters.

Why the IMB Matters

According to the Government, the Internal Market Bill is a "Bill introduced to protect trade and jobs across the UK by preventing new burdens on business when the Transition Period ends."

It contains a clause that would seek to guarantee the free flow of goods between the rest of the UK and Northern Ireland in the event that the EU exempts some goods for tariff-free access, or completely cut off access. The EU would have the ability to do such a thing under the current terms of the Withdrawal Agreement struck between the two sides in 2019.

Therefore, the IMB would supersede the Withdrawal Agreement, which has raised temperatures in Brussels who accuse the UK of breaking international law.

However, it is pointed out by commentators that the controversial aspects of the IMB would only be used in the event that the two sides fail to reach a free trade agreement. Indeed, international law is not broken by the passing of the IMB itself, but by the exercising of certain powers contained within it.

To placate the EU somewhat the UK has since moved to give Parliament a final say on the execution of the offending bits of the legislation, that would in effect break international law.