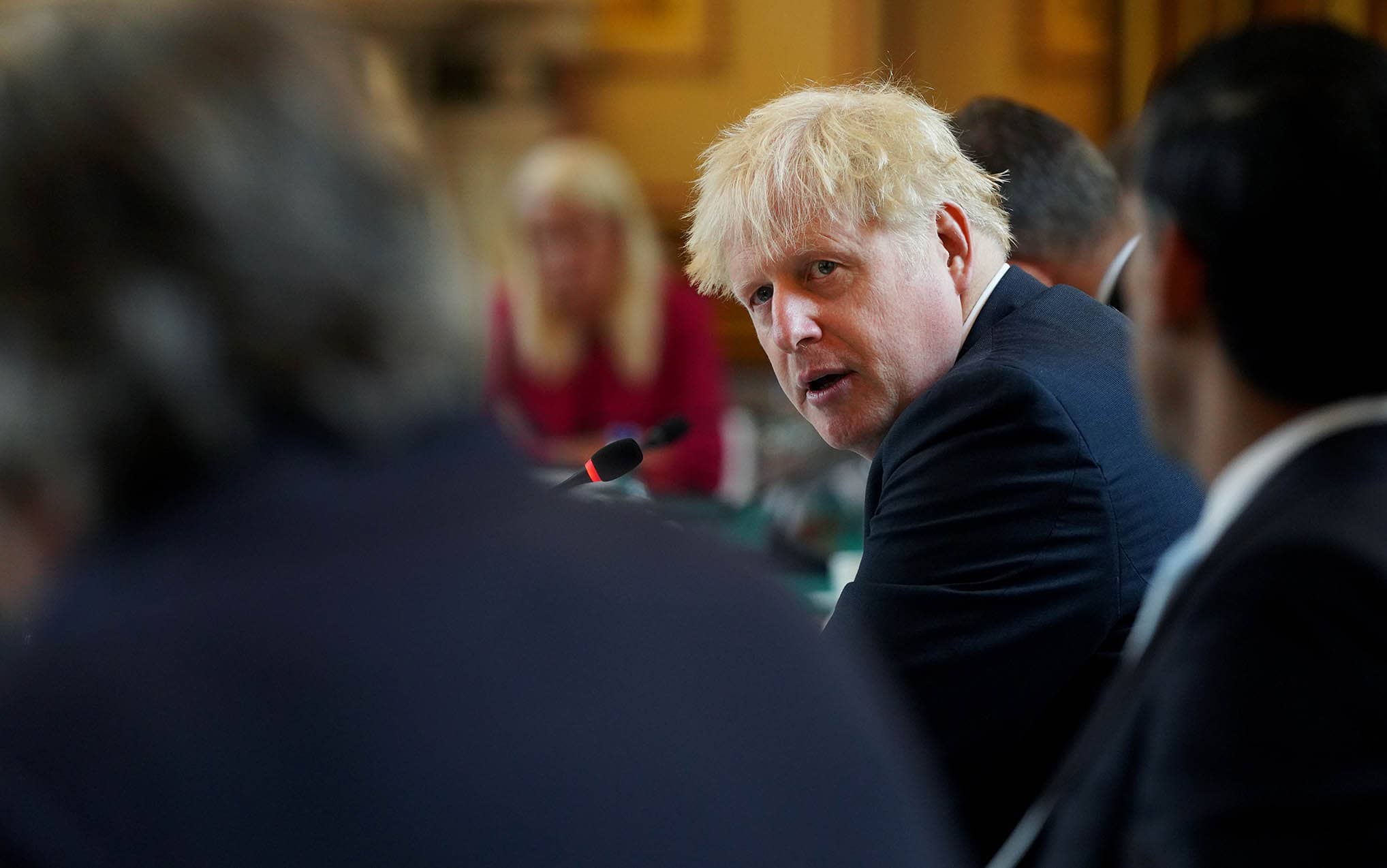 The British Pound's sell-off looks set to enter another day with the currency down against all its major peers in mid-week trade, with analysts citing a deterioration in relations between the EU and UK and a slump in global stock markets for the declines.

The UK and EU are unlikely to resolve the outstanding issues preventing a trade deal being reached before year-end, while an acrimonious dispute over the Withdrawal Agreement signed between the two sides last year looks to be stringing relations further.

"The Pound has continued to tumble," says Nikesh Sawjani, Economist at Lloyds Bank. "Rising fears of a no-deal Brexit have likely contributed to the decline."

The UK is set to bring forward legislation on Wednesday that will see some elements of domestic law override elements of the Withdrawal Agreement that relate to the Northern Ireland protocol in the event of a 'no deal' outcome to trade negotiations, which the UK says is necessary to provide clarification.

Critics say this would amount to the UK breaking an international treaty, an accusation all but confirmed by Northern Ireland Secretary Brandon Lewis in the House of Commons on Tuesday.

"The eighth round of formal negotiations between the EU and UK on a future trade deal enters its second day today. So far, discussions have been acrimonious leading the UK to announce its proposal for a UK Internal Market Bill which, if passed, would ensure that trade amongst all four home nations remained free from barriers after the Brexit transition periods ends on 31st December 2020," says Sawjani. 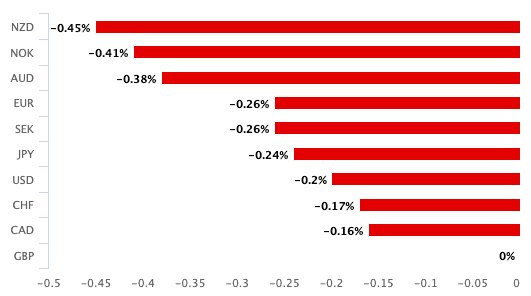 Above: GBP is falling against all its peers on Wednesday

A report from The Sun on Wednesday shows that the reason for the UK bringing forward this legislation is linked to threats made by the EU in current trade negotiations with regards to the export of food to Northern Ireland.

Reporters Nick Gutteridge and Harry Cole say the UK's attempt to "clarify" parts of the Withdrawal Agreement came after "what the UK saw as veiled threats from EU Chief Negotiator Michel Barnier's team that the EU could ultimately ban the export of food from the UK to Northern Ireland in the event of a 'no deal'".

Under the terms of the Withdrawal Agreement export of "products of animal origin" such as meat, fish, shellfish, eggs and dairy from the UK mainland over to Northern Ireland will become subject to EU oversight.

"The EU has a 'Third Country' list of approved third parties that can legally import agricultural goods into areas subject to their rules. The UK being put on that approved list was assumed to be a given and not subject to negotiation, but Brits were left seething after Michel Barnier’s team hinted the UK may not be given that legal status if talks collapse," says the report.

"In a No Deal scenario it left open the chance that the EU could declare food exports from Great Britain to Northern Ireland illegal. The perceived threat prompted ministers to demand a 'safety net' to address the problem with new domestic legislation," adds Gutteridge and Cole.

From a tactical point of view the UK's move to override aspects of the Withdrawal Treaty in the event of a 'no deal' appears to be a clear signal that the country is seriously preparing for a 'no deal', in line with Chief Negotiator David Frost's statement made over the weekend that "this time, we won't blink".

The intention is of course to push the EU to cede ground in the current deadlocked negotiations. The two sides will likely maintain this brinksmanship until October, when a crucial EU summit takes place that will ultimately decide whether a deal is struck.

If a deal is reached, the Pound should recover, however until then it appears any rebound will be limited. "Recent price action signals that the pound has put a near-term top in place," says Lee Hardman, Currency Analyst at MUFG. "Developments strongly suggest that there is an increasing risk that the state of Brexit negotiations could deteriorate first before any hope of a last minute compromise deal emerges. It poses downside risks for the Pound in the month ahead.

Selling pressures could ease should the market judge that on balance the prospect of a deal remains possible, after all it would not pay to head into October betting against Sterling only for a last ditch deal to be struck.

"GBP bears may be assuming little will come from this week’s trade talks, although as ever it seems with politics and Brexit, there is an expectation that even if this week’s talks fail, there might yet be an 11th hour positive result before the 15 October deadline," says Clyde Wardle, Senior EM FX Strategist at HSBC. 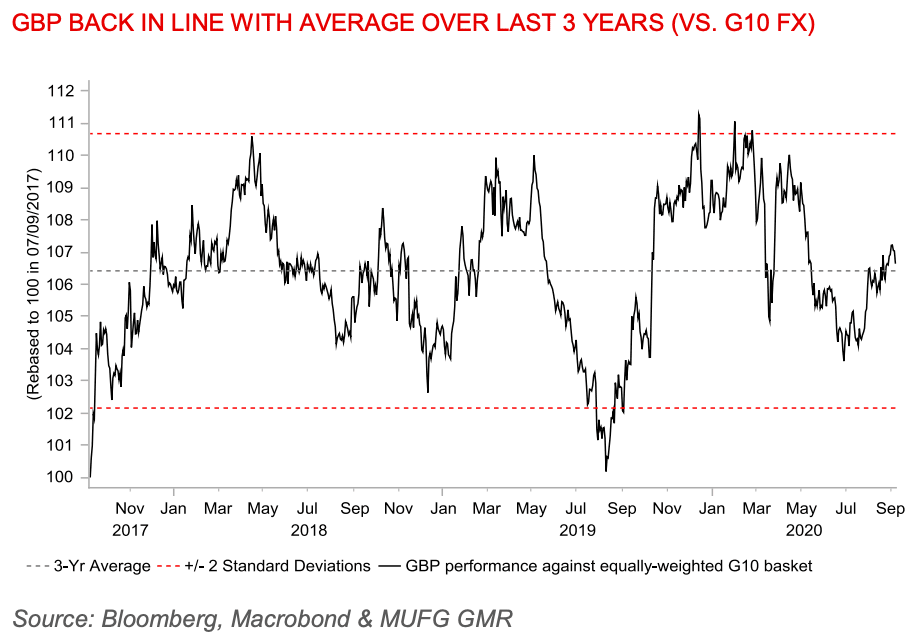 The British Pound has fallen sharply this week driven by the combination of a stock market sell-off and negative Brexit headlines, with the the UK currency falling by close to 2.0% this week and breaching key levels against both the Euro and U.S. Dollar.

Most publications cite Brexit as being the only driver of the decline, but overlooking the impact the falling stock market is having on the currency would be telling only half the story and Pound Sterling Live has since last week been covering the issue.

"A broad risk-off going hand in hand with escalating Brexit tensions accelerated Sterling selling," says Mathias Van der Jeugt, an analyst with KBC Markets. "The UK currency both suffers against the Euro and the Dollar."

The Pound is in 2020 considered a 'risk on' currency, i.e. one that rallies alongside rising stock markets and falls when equities are in decline. This phenomenon is widely linked to the UK's chronic current account deficit that sees the Pound rely on the inflows of foreign investor capital into the UK to find value, which in turn leaves Sterling highly susceptible to global investor sentiment.

The stock market rout of recent days has been lead by a sell-off in U.S. technology shares which have been looking overpriced for some time now. The air is now being let out of what was fast becoming a bubble, since last Wednesday’s record close, the NASDAQ is down -10.03%, losing c.$1.77tr of value, according to Deutsche Bank data.

"Of late, GBP also appears to be trading more in line with equities and acting as a pure risk-on/risk off currency," says Wardle.

How the Pound ends the week and trades over coming weeks could therefore depend on how equity markets behave.

Headlines out midweek are unsupportive on this front with news that the front-runner to produce a vaccine and potentially free the world of the chokehold of covid-19 has run into difficulties. Phase 3 trials of the Astrazeneca-Oxford University vaccine have been halted after a UK trial volunteer fell seriously ill, allowing independent researchers time to establish the cause of the illness and assess if it had anything to do with the vaccine.

"The key news overnight is that AstraZeneca has paused research on its coronavirus vaccine, which it has been working on with Oxford University, after a participant in its clinical trial became ill," says Jim Reid, a Strategist at Deutsche Bank. "Given that this was seen by many as the leader in the vaccine race, this is a blow."

At worst, the AstraZeneca candidate could be out, at best it is delayed; however it will be tainted by this headline which will likely fuel the anti-vaccine movement and potentially compromise its uptake.

With covid-19 cases surging in Europe again, more economic pain could be in store which could lead to underperforming equity prices which could in turn contribute to Sterling underperformance going forward.

Pascal Blanqué, Group Chief Investment Officer at Amundi, says the stellar performance of the summer months is unlikely to be repeated:

"The bullishness we have seen over the summer is unlikely to persist. All the elements that supported the risk asset rally are slowing down: the additional fiscal expansion is unlikely to be comparable to the first time, the same is true for monetary policy and the early signs of a recovery could be challenged."

But Duncan Toms, Fixed Income & Multi-Asset Strategist at HSBC in London says his team is not concerned about this wobble in markets, suggesting the declines might even be healthy.

"First, in the context of rally over the last two months, this simply resembles a blip. Second, put/call ratios in US equities have already jumped substantially, so we view this as a healthy correction," says Toms.

A recovery in stock markets would provide some level of protection for Sterling, however the deteriorating narrative surrounding Brexit trade negotiations might yet prove to be a force too hard for Sterling to resist.