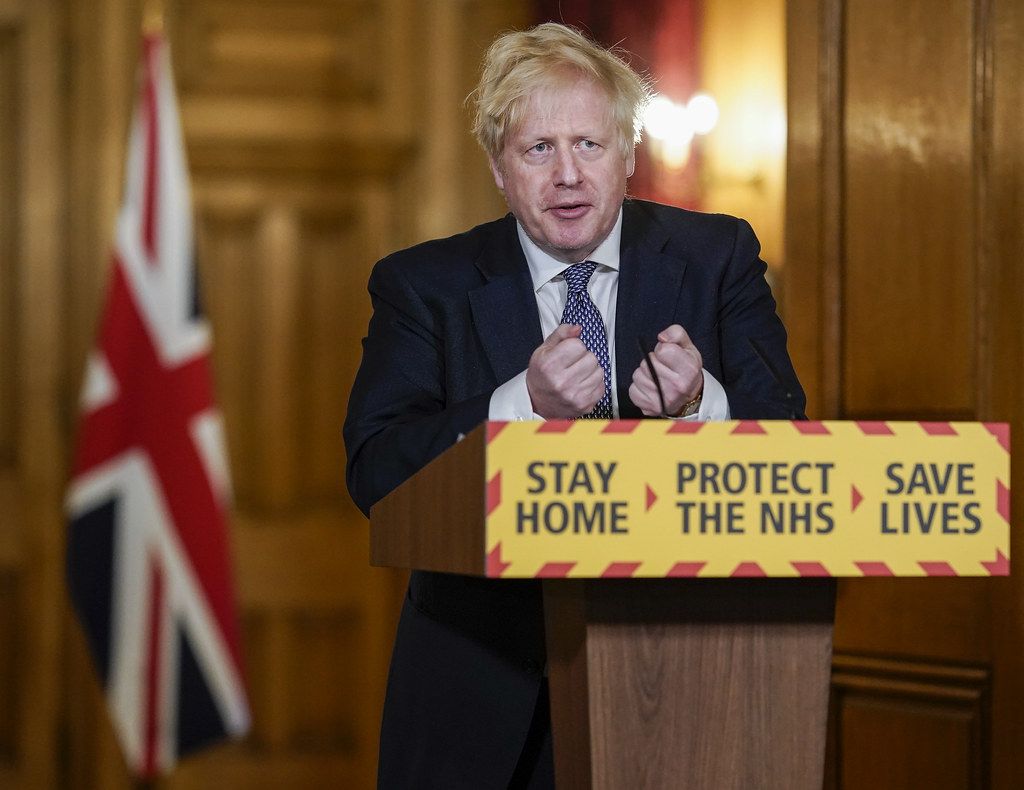 Pound Sterling shot higher right across the board on April 30 amidst a sizeable month-end flow that clearly turned out to be supportive of the UK currency which combined with domestic news that a roadmap out of lockdown would soon be announced, but the gains have ultimately been reversed at the start of the new month courtesy of a dramatic decline in global investor sentiment.

Markets were falling and commodity prices in retreat on May 01, with analysts saying a brewing confrontation between China and the U.S. is behind the negativity, after U.S. President Donald Trumpsaid he had received evidence that covid-19 originated from a lab in Wuhan, China.

Trump said he has a "high degree of confidence” that the coronavirus emanated from the Wuhan Institute of Virology. "We’re looking at exactly where it came from, who it came from, how it happened.”

Trump said evidence corroborating his statements will be released in the near future, and should it be credible we could see some notable geopolitical shifts as Western nations recast their relationship with China.

This matters for the Pound as it remains reactive to broader market trends ever since the covid-19 crisis took hold of market sentiment; we have seen Sterling tending to outperform the Euro and Dollar when markets are rising, but falling when stocks are being sold. 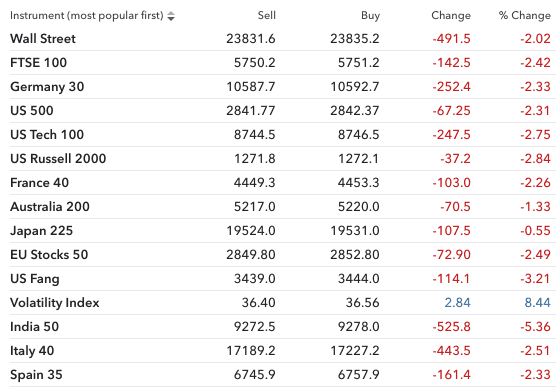 Above: Markets are a sea of red on May 01. Image courtesy of IG.

Media report Trump is considering an executive order to prevent an initial $50bn of government retirement savings funds flowing into China due to his growing belief a Chinese institution was responsible for the covid-19 outbreak.

Part of the U.S. government's retirement savings are held in the Thrift Savings Plan, which is now obliged to transfer $50bn into Chinese capital markets as per an increased in weighting for China in the MSCI All Country World Index.

"This is likely to put a serious dent in the head-scratching, math-defying risk-on rally we have seen for much of the week. Indeed, now month-end positioning is out of the way it has the potential to open up an entire new phase of USD buying," says Michael Every, Global Strategist at Rabobank's Hong Kong branch.

The Pound is therefore likely to see a volatile start to the new month amidst the upswell in geopolitical tensions.

Pound Sterling saw a strong bout of appreciation against the majority of its G10 peers at the turn of the month, with most analysts suggesting the spike in value was due to month-end flows while others saw an an announcement that the UK government will soon set out a covid-19 lockdown exit path as being supportive.

The Pound experienced some sharp moves, with a +1.0% gain agains the Dollar and a 0.5% gain against the Euro which are moves that would typically be associated with substantive news or data releases.

Yet, there was relatively little on the newswires for traders to grab onto, suggesting that month-end flows were behind the sizeable jumps.

"To start off May on Friday, traders have to cover, hedge or reverse all kinds of positions, if they didn’t already. Month-ends can be peculiar and we often let them come and go without comment," says Barbara Rockefeller at RTS Forex.

The GBP/EUR exchange rate lifted half a percent to go above 1.15 once more, confirming there is significant technical resistance in the 1.15 area. The GBP/USD exchange rate rallied by over a percent at one stage to reach a high of 1.2637, the Pound-to-Australian Dollar exchange rate meanwhile snapped a losing trend to register a rise back to 1.9455. 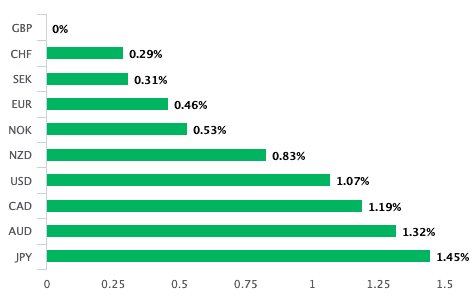 Above: The Pound saw strong gains at the turn of the month

But, suggesting the Pound's month-end gains were simply a result of magical month-end flows would mean some supportive fundamental drivers risk being overlooked.

"Pound strength Thursday had the U.K. currency on track for its first monthly win of the year. Pound buoyancy, while modest, is more a function of improved global risk appetite than a brightening in area fundamentals. Capping sterling gains is the view that the U.K. is likely to be among the last European nations to roll back lockdown measures which, while positive for battling the health crisis, puts its economy at a comparative disadvantage," says Joe Manimbo, foreign exchange analyst at Western Union.

The question of the UK's exit from the coronavirus lockdown was front-and-centre on Thursday when Prime Minister Boris Johnson held his first coronavirus press conference since his leave of absence due to coronavirus.

In his address, the Prime Minister said a detailed roadmap to exiting lockdown would be announced next week after stating the country had now pased the peak of the epidemic and was now on the “downward slope”.

A "comprehensive plan" would be released that will detail what measures would be implemented to get the economy moving again, how people could safely commute and work and how children could return to school.

The prime minister said that the government would recommend face-coverings, partly to give people confidence to go back to work. He also denied that he would seek to repair the damage to public finances with another dose of austerity.

For Sterling, exiting lockdown could potentially prove critical in a world where foreign exchange market focus shifts from the simple 'risk on' / 'risk off' response to broad coronavirus trends to focussing on individual countries and their respective strategies.

Those countries that exit lockdown fast but, crucially, in a well managed fashion that avoids a second spike in infections, could see their currencies outperform.

"Only a modest loosening of the lockdown looks sustainable," says Samuel Tombs, UK Economist at Pantheon Macroeconomics. "We expect PM Johnson to err on the side of caution and to reverse restrictions only tentatively."

Tombs cites findings by epidemiologists at Imperial College, who are advising the government, that estimate that the current replication rate of the virus is about 0.7, down from four in early March.

"That leaves little room for the lockdown to be loosened without pushing R0 back above one, which eventually would lead to an overwhelming second wave of cases," says Tombs. "Indeed, it's worrying for the economy's recovery prospects that the combination of a severe lockdown and a surprisingly compliant population has not suppressed the replication rate to an even lower level."

Expectations for a slow exit from lockdown in the UK lead Pantheon Macroeconomics to slash their economic growth forecasts for the UK. Previously Tombs and his colleagues suggested that GDP in the third quarter would reverse about two-thirds of its second quarter decline, but this is now assessed to have been too optimistic.

"As a result, we now expect a drop in GDP of about 15% quarter-on- quarter in Q2 to be followed by a increase of 7.5%, not 10%, in Q3. The economy will remain a shadow of its former self, at least until a vaccine is widely available," says Tombs.

We get the sense that the foreign exchange market is still yet to fully turn its guns on exit strategies and as such we would imagine it is hard to confidently how the Pound will react to a slow exit from lockdown from the UK economy.

On the upside, a slow and steady exit would greatly minimise the chance of a severe second-round of infections which would be potentially incredibly damaging to the UK economy. So on this count, the government's approach could be deemed as being Sterling positive.

On the downside, a slow exit from lockdown means the economy will stage a sluggish recovery which potentially allows other countries to outperform on an economic basis. Economic outperformance could in turn become a key currency market driver, obviously leaving the Pound at a disadvantage.

While Sterling is not powering higher at the current time it is nevertheless trading towards the top of its late-March/April range which suggests foreign exchange markets are not yet concerned about the UK's exit strategy.

"Attention has shifted towards easing the restrictions, but a premature move risks a big ‘second wave’ and a resurgence in fatalities. Unwinding the lockdown is therefore likely to be gradual, meaning a full return to normality may be some way off for the UK economy," says Philip Shaw, Chief Economist at Investec Bank plc. 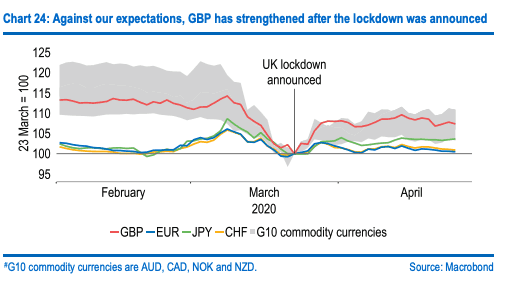 Shaw says the Pound does appear to be responding to issues concerning the country's response to covid-19, citing evidence that the fall in Sterling up until March 23 appears to have been due to concerns about the UK’s initial response to virus.

"Sterling has strengthened following the lockdown on 23 March to a greater extent than its G10 peers," says Shaw.