The Pound-Dollar rate was reaching for the stars late Thursday after the Federal Reserve (Fed) announced the surprise expansion of its Main Street Lending Program and technical analysts say it might have scope to rise further in the short-term, although many are also warning of fresh losses from May onward.

Pound Sterling rose 1.40% to trade as high as 1.2650 against the Dollar during the European session Thursday, taking the Pound-Dollar rate briefly through its 200-day moving-average of prices at 1.2648 after which it swiftly retreated. However, a daily close above that latter level would open the door for the British currency to take a run at the 78.6% Fibonacci retracement of the 2020 downtrend located up 1.2818, technical analysts say. 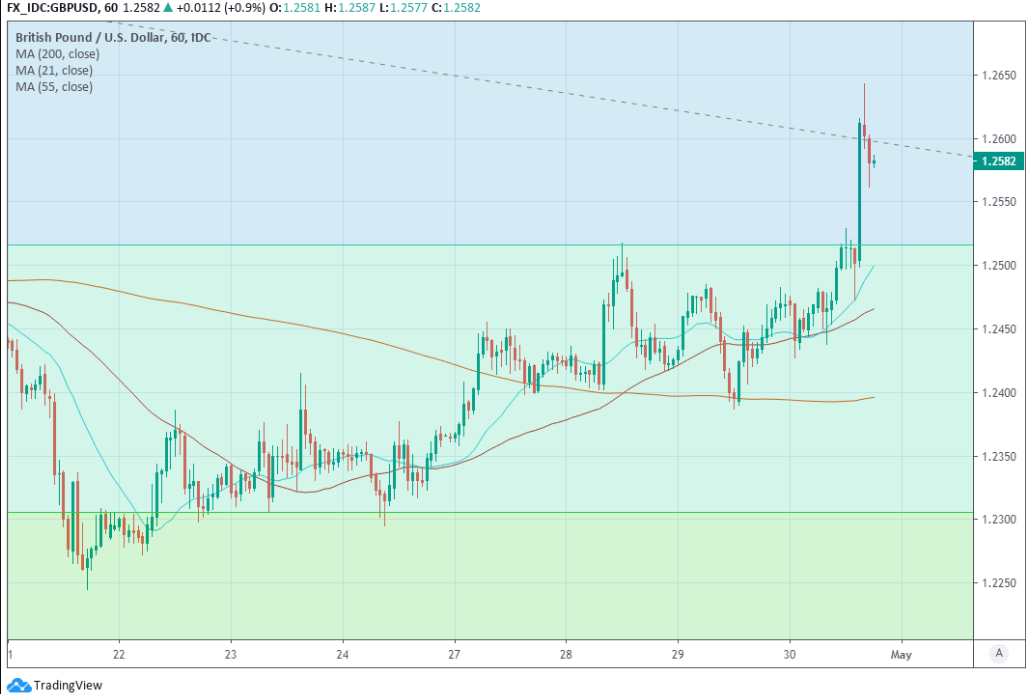 Above: Pound-Dollar rate shown at hourly intervals. Breaks through 61.8% Fibonacci retracement of 2020 downtrend.

Price action came after the Fed announced the surprise expansion of its Main Street Lending Program designed to help credit flow to small and medium-sized businesses in sound financial condition before the pandemic.

The programme directs the Federal Reserve Bank of Boston to buy through a specially created company between 85% and 95% slices of emergency credit to small and medium sized businesses that met set criteria before the pandemic. It's supported by $75bn of capital provided by the U.S. Treasury under the Coronavirus Aid, Relief, and Economic Security (CARES) Act.

Main Street Loans had to be a minimum of $1mn but that's now been reduced to $500k. Also applicants could originally have no more than 10k employees and turnover no larger than $2.5bn but the Fed now says it'll open the programme to those with up to 15k employees and turnovers of $5bn. Loans are for four year terms priced 3% above the London-Interbank-Offered-Rate (LIBOR) though interest and principal repayments can be deferred for one year.

The announcement came hours after the Department of Labor revealed that more than 30 million Americans have filed for unemployment insurance since the coronavirus began to close down the economy in late March. This will sideline around half of all working-age Americans in May, according to ING Group. That's after the Bureau of Economic Analysis said the economy shrank at an annualised pace of -4.8% in the first quarter, the largest contraction since 2008 but one that could give way to a fall of up to -40% in the second quarter. 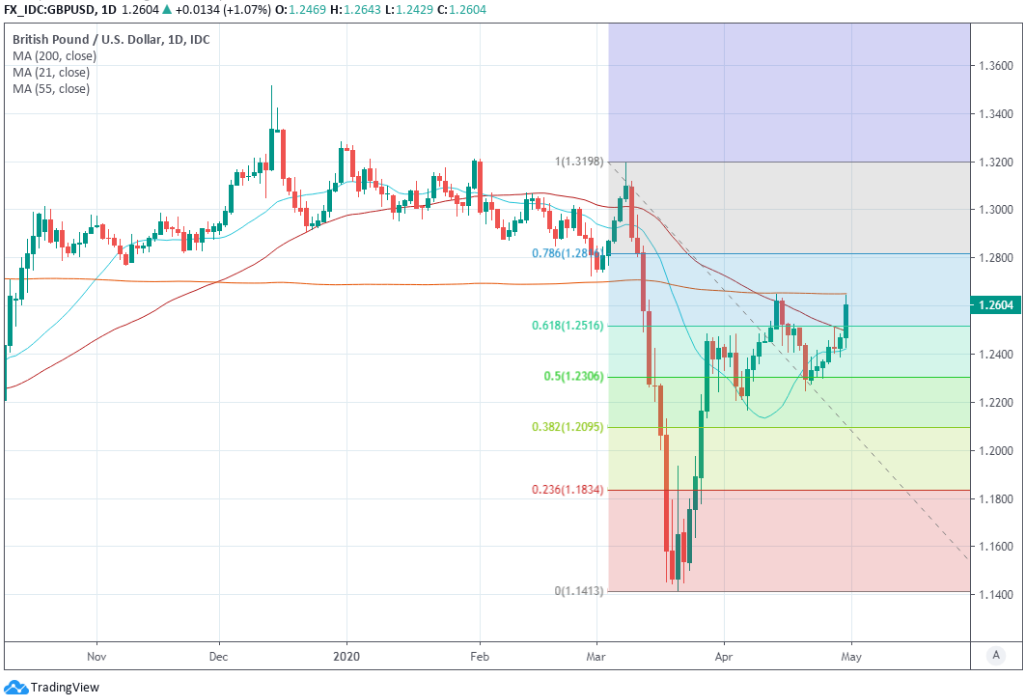 It also came less than 24 hours after Chairman Jerome Powell said "more likely needs to be done" to support the world's largest economy through the coronavirus crisis and that "now is not the time to be concerned about federal debt." This was after leaving the Fed Funds range at 0%-to-0.25% and reaffirming it will buy government bonds, corporate debt and securitised mortgages "in the amounts needed to support smooth market functioning."

"This headline was the only real takeaway from the meeting in our opinion, and explains the modest extension of positive risk sentiment and USD selling," says Eric Bregar, head of FX strategy at Exchange Bank of Canada. "The bearish head and shoulders pattern that we talked about early yesterday as a potentially bearish technical development for the daily GBPUSD chart never got confirmed by virtue of the market closing NY trade decisively back above 1.2440."

Bregar says a midnight close above 1.25 would be "technically positive" for the Pound and a signal that a concerted challenge of 1.2640 is in the pipeline. The Pound had been roadblocked for weeks by the 61.8% Fibonacci retracement of the 2020 downtrend around 1.2515 and also the 55-day moving average that's recently fallen to around 1.2495, although widespread Dollar weakness saw the Pound-Dollar rate charge past both Thursday.

The rub for Sterling is that Brexit headwinds are returning to haunt it and could increasingly weigh on the currency through May and June as the deadline for requesting an extension of the Brexit transition period draws closer. The government insists it won't ask for an extension and that if the EU requests one it will say no. This is despite only "limited progress" in talks about the future relationship, with just nine weeks to go before the deadline. 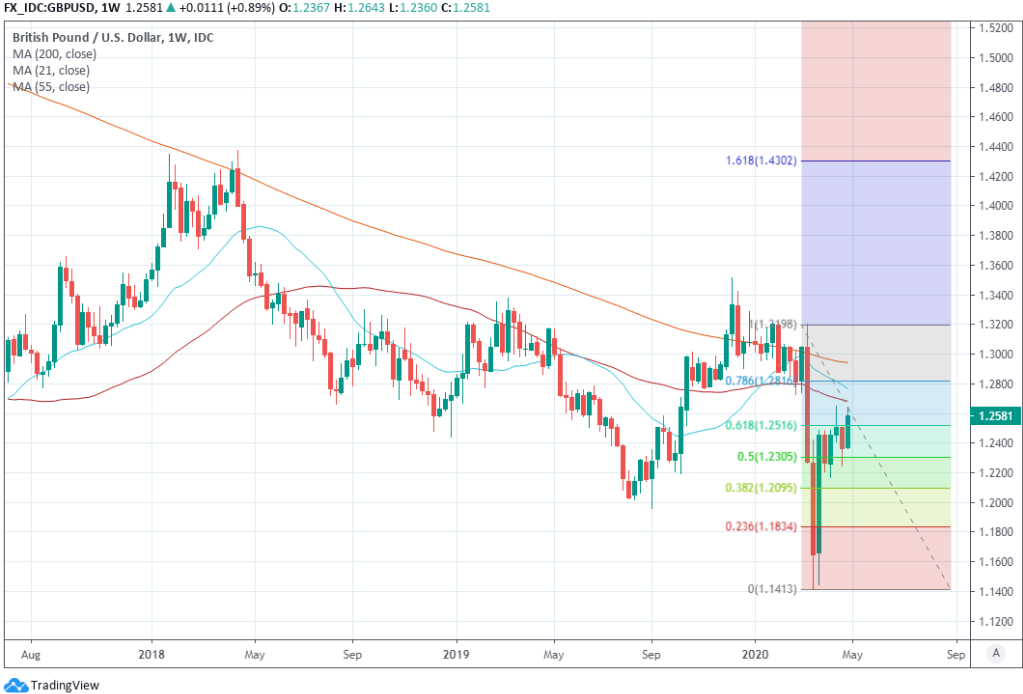 Above: Pound-Dollar rate at weekly intervals. Roadblocked for weeks by 61.8% Fibonacci retracement of 2020 downtrend.

Sterling also risks sticking out like a sore thumb among major currencies in May, especially through the early days, given plans for a lifting of the coronavirus 'lockdown' are still at least a week away. Prime Minister Boris Johnson said Thursday he will set out a comprehensive plan for lifting the lockdown, although that was previously supposed to come before the weekend. The UK also has a shortage of personal-protective-equipment for everybody including 'key workers' when countries like Germany, Austria, Czech Republic and Poland have made wearing some form of face mask essential when in some public spaces.

"April has historically been the most positive for GBP/USD with an average return of +1.8% since 2010. Month-to-date, GBP is already +0.68% versus USD. As it stands, the positive seasonality in April remains intact. However, as much as April is a positive month for GBP, driven in large part by the new UK tax year and corporate dividend repatriation of overseas income, May is a month where USD strength is the main driver for GBP/USD under-performance," warns Kamal Sharma, a strategist at BofA Global Research. "May is the worst month for GBP/USD with an average decline of 2.3% since 2010."

BofA forecasts a Dollar resurgence ahead of the second-half 2020 and prefers a 'buy-on-dips' approach toward the U.S. currency for the time being. The team says investors have been too optimistic about how soon economies may be able to return to normal, if they can at all, as well as on the likely pace of global economic recovery from the coronavirus-inspired downturn.

The bank looks for the Pound-Dollar rate to hit 1.15 by the end of June but to close 2020 at 1.21, while the Euro-Dollar rate is seen hitting 1.02 in June before recovering to only 1.05 by year-end. These indicate upside for the Dollar Index given Sterling and Euro account for two thirds of flows measured by it.