The British Pound was the top performing major currency ahead of the weekend, recording big-figure percentage gains against the Euro, Dollar, Yen, Franc and Dollar-bloc currencies amidst a decided improvement in investor sentiment.

"A 2.5% rally Friday helped sterling end a horrific week on a brighter note. The Bank of England helped to pencil in a line under the Pound after it delivered a second emergency interest rate cut in as many weeks. The BOE Thursday slashed its key rate to a record low of 0.1% from 0.25%. The Pound for now is taking its cue from the upside of the BOE’s action for growth than the downside from a diminished yield appeal," says Joe Manimbo, foreign exchange analyst at Western Union. 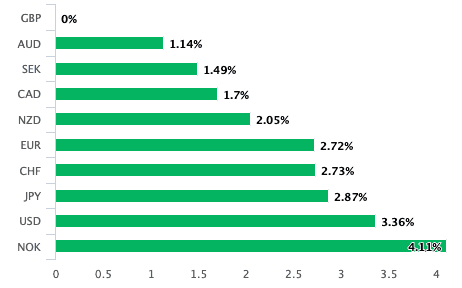 A surprise decision by the Bank of England to slash interest rates and boost its quantitative easing programme by £200BN to £645BN is judged by the market as a credible response to the negative economic impact of the coronavirus, and should ultimately stand the UK economy on a firm footing once the virus has passed.

Currencies tend to react to relative economic outperformance and any assumption that the UK economy can exit the crisis with greater a velocity than its rivals will assist Sterling upside.

Global conditions could however be more important when assessing Sterling's strong end to the week. We note that the investor panic that characterised the first half of the week has certainly faded somewhat, courtesy of a gargantuan effort by the world's central banks to stabilise the global financial system.

The Federal Reserve has on Friday announced it has engaged in a coordinated action with its peers to beef up the supply of dollars into the global economy via swap line arrangements, which should ease any further dollar shortages and ultimately lessen stresses on the system.

"The Bank of Canada, the Bank of England, the Bank of Japan, the European Central Bank, the Federal Reserve, and the Swiss National Bank are today announcing a coordinated action to further enhance the provision of liquidity via the standing U.S. dollar liquidity swap line arrangements," read a statement issued by the Bank of England in response to the action.

The Bank says that in order to improve the swap lines' effectiveness in providing U.S. Dollar funding, these central banks have agreed to increase the frequency of 7-day maturity operations from weekly to daily.

These daily operations will commence on Monday, March 23, 2020 and will continue at least through the end of April. The central banks will continue to hold weekly 84-day maturity operations.

The swap lines "serve as an important liquidity backstop to ease strains in global funding markets, thereby helping to mitigate the effects of such strains on the supply of credit to households and businesses, both domestically and abroad," said the Bank of England.

Eye-watering declines in stocks and commodities since late February progressively lead to a shortage of liquidity in the plumbing of the global financial system which is ultimately denominated in Dollars.

Sterling was left particularly exposed to the meltdown as foreign investors hold sizeable positions in UK-domiciled investment assets such as gilts and stocks. A liquidation of investments placed tremendous pressure on the Pound.

"GBP has been aggressively sold in the USD session, supportive of the view that this has been a funding led decline," says Kamal Sharma, a strategist at BofA Global Research. "Brexit is well and truly off the radar for now, but the elephant that is the current account deficit has entered the room."

The UK's current account deficit - a symptom of the country importing more than it exports - leaves Sterling reliant on the inflow of foreign investment capital. When that investment reverses the Pound can come under pressure, as we have seen of late.

But with global markets on the up, the Pound is finding its feet once more.

Substantial fiscal efforts by global governments to minimise the impact of the coronavirus outbreak have also aided a pick up in sentiment and the S&P 500 is headed for its first two-day advance since mid-February.

Can the trend last? It remains too early too tell and we will look for further follow-through upside price action early next week before we become more confident.

The financial market place has fallen in anticipation of a global recession, what remains to be seen is how deep and long-lasting the recession is.

The number of coronavirus infections in Western economies continues its steady climb higher and we believe the fundamental conditions for a strong rebound will only exist once the spread of the virus starts to ease and an exit from the crisis appears on the horizon.