- But anxiety over looming trade talks to dominate outlook

The British Pound starts the first full business week of 2020 on a strong footing, recording advances against the majority of the world's major currencies.

The rally comes following a better-than-expected economic data release that suggests the UK economy could pick up some momentum in the early stages of 2020. The Services PMI - which gives a snapshot of activity in the UK's dominant services sector - read at 50, which is better than the 49.1 markets were expecting.

Analysts at Danske Bank say the data is still weak, "but future business expectations have risen on the back of PM Johnson's big election victory."

Danske Bank note the Pound moved higher against the Euro on the back of the release.

"Business optimism recovered to its highest level since September, and firms returned to increasing their staffing levels, with the employment index rising to 51.1, from 50.1. Crucially, the vast majority—about 85%—of responses to Markit’s survey were received before the general election on December 12, implying that firms that submitted results too late for the flash reading were much more upbeat than the rest," says Samuel Tombs, Chief U.K. Economist at Pantheon Macroeconomics.

Looking ahead, Prime Minister Boris Johnson will this week look to kick-start the process of EU-UK trade negotiations during a meeting with the president of the European Commission.

Johnson will on Wednesday host Ursula von der Leyen in No 10 Downing Street, "for opening talks on Britain’s post-Brexit trade deal with the EU," reports the The Times.

The newspaper says Johnson is determined that the next phase of Brexit talks will be significantly smoother than the first, which were beset by infighting and hostile briefings on both sides. The outcome of the initial contact between the leaders could well determine how Sterling trades this week, with any progress coming out of the meeting likely to prove positive for Sterling.

The EU will however likely embrace a tough stance from the outset, and Shamik Dhar, Chief Economist at BNY Mellon Investment Management, says 'no deal' Brexit is a risk for the Pound in 2020 and "it's very real, because at the end of the day if we can't conclude a negotiation in that tight timeframe...the default is a 'no deal' exit."

As a result, Dhar says he expects sentiment towards the UK currency to remain subdued over coming months.

"Sterling traded much of 2019 as a Brexit currency and so long as the 'no deal' risks remains I think it will remain weak," says Dhar in an interview with Bloomberg TV.

Sterling ended 2019 with a 5.36% gain over the Euro and a 3.09% increase on the Dollar, with a notable move higher coming in the final quarter of the year. However, the rally has since paused and Sterling has struggled over recent weeks: 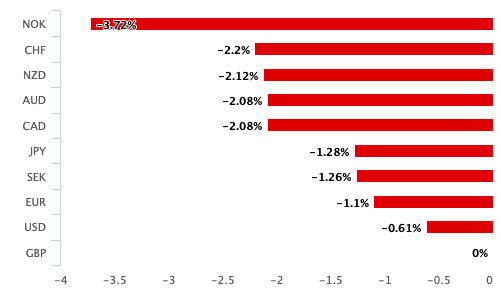 Above: GBP performance against the major currencies over the course of the past month.

Over recent years the Pound has been weak by historical standards, reflecting the market's anxiety over Brexit. While Brexit will take place on January 31 and the UK and EU will legally separate, the two sides will enter trade negotiations, which should be concluded by year-end.

What happens if no trade deal is agreed is uncertain at this point; but one popular opinion is that the UK and EU will default to World Trade Organisation settings which would create headwinds for the economy.

However, Dhar sees scope for a more gradual and staggered outcome to talks, with some elements of a trade deal being agreed thereby eliminating the prospect of a 'cliff edge'.

"To me it looks like the initial position, at least, will be heading for what you might call a skinny deal with the EU based on goods, and maybe certain sectors in particular," says Dhar.

If markets are sympathetic to this position we would see the talk of a 'cliff edge' fade away, and with it some anxiety over Sterling's outlook. This could allow Sterling to potentially extend the gains it made in 2019 over coming months.

On the question of regulatory alignment - which will be key to securing a trade deal - Dhar says the UK will not start off negotiations in a dramatic fashion and will aim to broadly stay aligned to the EU, but will ultimately drifty away over subsequent years.

* Time to move your money? | Get industry-leading exchange rates and maximise your currency transfer potential with Global Reach. Speaking to a currency specialist will also help you to capitalise on positive market shifts while protecting against risk. Find out more here. * Advertisement

Despite his expectation for Sterling to be weak in 2020, Dhar does remain relatively more bullish on the outlook for the economy in 2020 than many of his peers: "my own feeling is I have always been less pessimistic about the economic impact of that than most and therefore remain relatively positive about the UK economy this year."

Robert Howard, an options analyst at Thomson Reuters, sees scope for Sterling to push higher over coming weeks and says there is a probability that the GBP/USD exchange rate "will rise to 1.50 for the first time since the Brexit referendum day".

Such a move higher in Sterling would become likely if foreign demand for UK stocks grows this year says Howard; "UK equities have underperformed non-UK equities since Britain voted to leave the European Union. Some of that unease evaporated when PM Boris Johnson's Tories won an 80-seat majority in last month's general election, which unlocked the door to a Jan. 31 Brexit agreement with the EU."

"Uncertainty remains over trade talks between the EU and UK, which are expected to begin this quarter, but if the mood music is gentle UK equities and the pound should gain. GBP/USD has started 2020 trading on a 1.32 handle, after rallying sharply from 1.29 into the year's end," says Howard.

Despite Sterling's poor start to the year, the charts for the EUR/GBP exchange rate continues to advocate for further declines in the Euro and gains for Sterling.

“Our bias within these two limits is neutral but near term while capped by the 5 month downtrend we will err on the bearish side and allow for another failure and possible retest of the .8239 recent low,” says Karen Jones, head of technical analysis at Commerzbank. 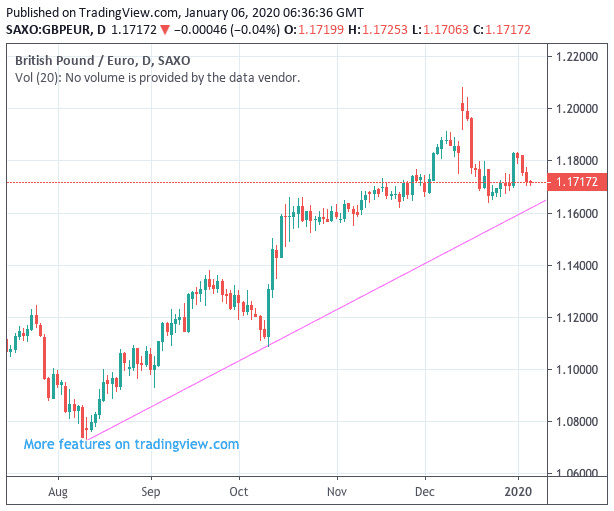 Above: GBP/EUR remains in an uptrend, despite the soft start to 2020. * Time to move your money? Get industry-leading exchange rates and maximise your currency transfer potential with Global Reach. Speaking to a currency specialist will also help you to capitalise on positive market shifts while protecting against risk. Find out more here. * Advertisement

A EUR/GBP rate of 0.8239 would mean a Pound-to-Euro exchange rate of 1.2137, which is above the recent peak around 1.2080 and would be the highest level seen by Sterling against the Euro since June 29, 2016 - barely more than a week after the Brexit referendum.

Jones says the EUR/GBP rate will remain offered below the 55-day moving-average of 0.8587, (which means the Pound-to-Euro rate is expected to retain an upside bias above 1.1645).

But she’s told clients to walk away from their bets on Sterling if the exchange rate happens to fall below 1.1627.