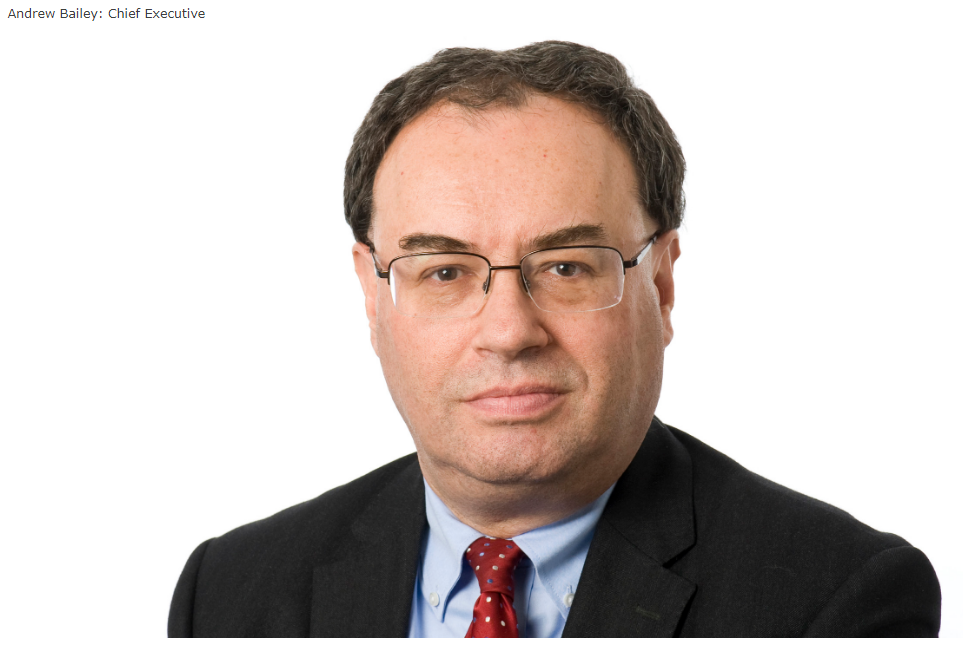 Above: Andrew Bailey as Chief Executive of the Financial Conduct Authority © FCA

- Andrew Bailey named next governor of Bank of England.

- Is a regulatory stalwart but markets in dark on policy views.

- As has never served on the BoE's rate setting committee.

- 2020 rate cut almost half priced, leaving GBP all to play for.

Pound Sterling remains fixated on the path toward a future trade relationship with the EU but will also now have to contend with heightened uncertainty about the outlook for interest rates in the months ahead after Andrew Bailey was announced Friday as the next governor of the Bank of England (BoE).

Andrew Bailey, a stalwart of monetary and financial officialdom, has never before served on the Monetary Policy Comittee of the BoE despite a decades-long career at the bank and other regulatory institutions. He will replace the current, outgoing and former Bank of Canada Governor Mark Carney.

Bailey was announced by HM Treasury Friday as the next Governor but Pound Sterling and its investors are in dark as to whether he's a so-called 'dove', 'hawk' or something else entirely when it comes to monetary policy. 'Dove' is a colloquialism used in markets to describe those who view the inflation outlook as inadequate and as result, tend to favour lower rates rather than unchanged or higher borrowing costs. A 'hawk' is the antithesis of a dove.

"Having previously worked at the Bank in various guises for over 30 years, Bailey can be considered an insider with outside experience. His previous role of Deputy Governor of Prudential Regulation and his most recent post as the CEO of the Financial Conduct Authority leave him well placed to cope with the increasingly onerous regulatory aspect of the role," says Paul Dales, chief UK economist at Capital Economics.

Bailey will lead the BoE, its MPC and be accountable in relation to all other responsibilities of the bank from March 16, although the outcome of his first outing as Chairman of the MPC will not be known until the March 26 interest rate decision is announced. Carney's terms is extended until March 16.

This means a change in the outlook for rates and a related shift in the fortune of Sterling cannot be ruled out for the months ahead, despite the BoE's Thursday statements, in part because two of the nine-strong MPC voted for a second time this week to immediately reduce Bank Rate from 0.75% to 0.50%.

Bailey's views on the current economy, inflation environment and outlooks for both are not yet known but if he is of the same disposition as 'dovish' dissenters Jonathan Haskell and Michael Saunders, he'd only need to persuade two other committee members to vote with him in order for interest rates to be lowered.

And Pound Sterling is not prepared for a rate cut any time soon. Pricing in the overnight-index-swap market implied on Friday a March 2020 Bank Rate of 0.65%, which is below the current 0.75% level but substantially above the 0.50% that would prevail following a standard 25 basis point reduction to the cash rate.

A 2020 cut was almost half baked into the price of Sterling and bonds on Friday but it wasn't until December 2020 the OIS market came close to fully 'pricing in' a cut, which is further grounds to expect the Pound will be whipped by changes in interest rate expectations over the coming months - one way or the other.

"Pricing has seen 7bps of cuts by November 2020 taken out, compared with Wednesday’s pricing which suggests that yesterday’s vote to hold the rate steady and comments have reinforced somewhat less dovish expectations. If this assessment does prove accurate then it would be marginally positive for the pound," says Fritz Louw, a currency analyst at MUFG.

Bailey's public engagements will now attract increased attention in the months ahead and slowly but surely, clarity on his views about the current economy and outlook will emerge, helping to further shape the market's ever-evolving expectations for interest rates and the Pound.

In amongst all of this Prime Minister Boris Johnson will be coveting a preferential trade agreement to replace membership of the EU, which is expected to continue almost in all but name after a January 31 technical exit and until the expiry of a standstill transition period that is at the moment intended to end concurrently with the 2020 year.

Bank Rate was held at 0.75% Thursday and the BoE reiterated that borrowing costs could go either up or down in the next change, subject to developments in the MPC's expectations for the economy and inflation.

The Office for National Statistics revised up its estimate of UK GDP growth in the third quarter on Friday from 0.3% to 0.4%, although it remains the case that growth will slow this year from the 1.4% seen in 2018 in the absence of a 0.5% increase in GDP during the final quarter.

The economy contracted by 0.1% in the second quarter after a 0.6% increase in the first three months of the year, although the BoE said Thursday that a revival of business investment might lift growth next year if the path toward new preferential trade arrangements with the EU becomes clearer.

"We expect Bailey to broadly follow in Carney's footsteps for now: a cautious MPC will need to navigate between a slower economy and prolonged Brexit uncertainty. We expect Deputy Governor Broadbent's influence on the MPC to rise," says James Rossiter head of global macro strategy at TD Securities.