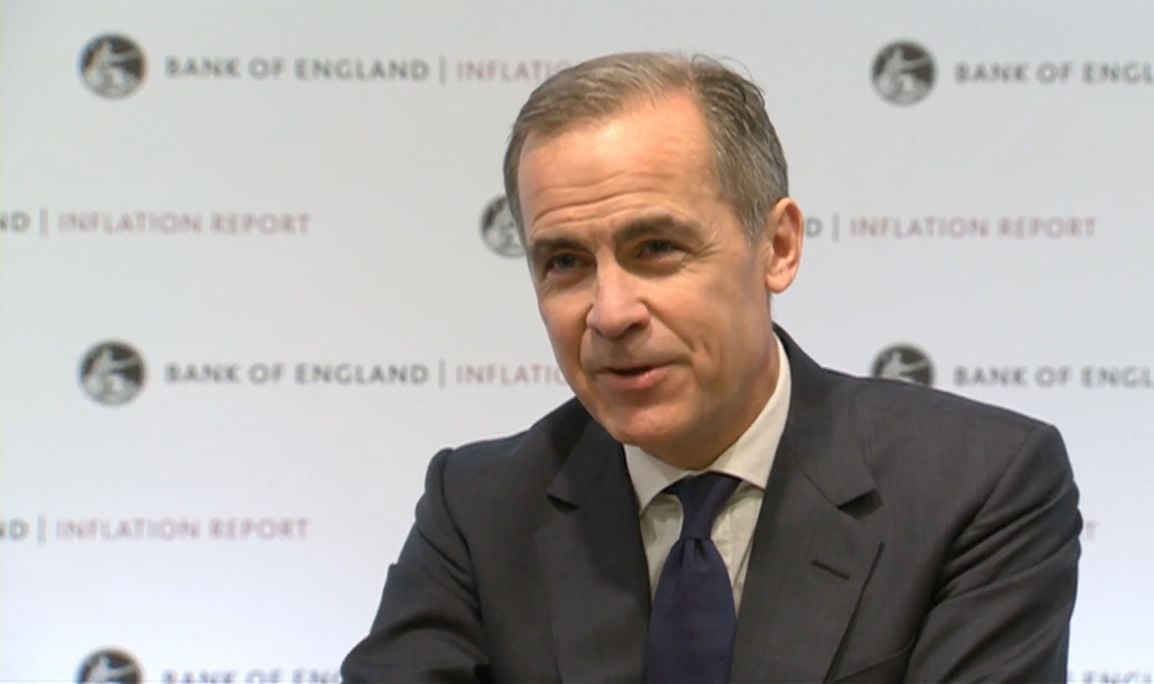 - GBP retreats from EUR and USD late in Thursday session.

- Sticks with line that rates could go either up or down next.

- Decision comes ahead of Brexit Bill vote in parliament.

The Pound handed earlier gains back to the Euro and Dollar late Thursday after the Bank of England (BoE) was unable to inspire a sustainable upward move with December's decision to retain its 'neutral' interest rate stance.

Thursday's policy decision and statement dispelled market concerns that the BoE might have been close to cutting rates but it wasn't enough to ensure the Pound retained the initiative it demonstrated earlier in the session.

Pound Sterling was down against all of its major rivals an hour out from the London close Thursday after having wracked up gains over the entire major currency basket during the morning and early noon hours.

"Sterling has been all over the place since 7amET; lower initially, then higher, and now lower," says Eric Bregar, head of FX strategy at Exchange Bank of Canada. "The market lost chart support in the 1.3110s yesterday and it failed three times since then to regain it; one attempt of which came after this morning’s BOE announcement. We think this negative technical development alone (what we call repeated buyer failure) is enough to explain why GBPUSD is now trading in the 1.3040s." 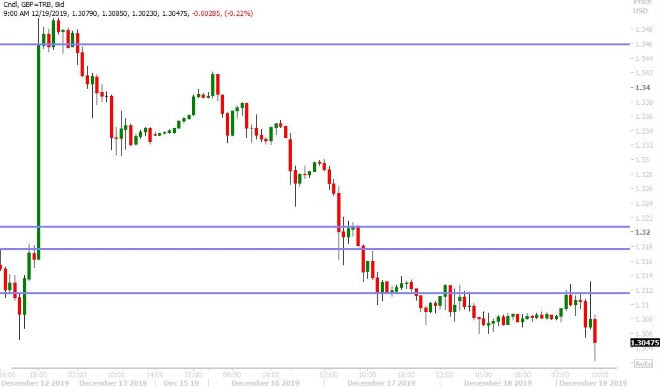 Above: Exchange Bank of Canada graph of Pound-to-Dollar rate.

"We believe the MPC deployed skillful efforts not the rock the boat so soon after the election and in the face of resilient Brexit uncertainties," says Fabrice Montagne, an economist at Barclays. "While we maintain our call of monetary status quo, we highlight a material risk of a cut particularly if November activity and January surveys fail to improve."

The BoE says UK growth has slowed because of "Brexit uncertainty" and "weaker global growth driven by trade protectionism" but noted that Prime Minister Boris Johnson's withdrawal agreement will, if ratified, reduce the risk of a 'no deal' Brexit and improve the odds of an orderly shift to a new preferential trading regime. It forecasts final quarter GDP growth of 0.1%.

BoE rate setters reckon the withdrawal agreement will lead to a rebound in business investment and economic growth next year.  The bank also alluded to the 'phase one deal' struck by President Donald Trump with China, appearing to suggest that it might lead to a stabilisation of global growth next year.

"If global growth fails to stabilise or if Brexit uncertainties remain entrenched, monetary policy may need to reinforce the expected recovery in UK GDP growth and inflation. Further ahead, provided these risks do not materialise and the economy recovers broadly in line with the MPC’s latest projections, some modest tightening of policy, at a gradual pace and to a limited extent, may be needed to maintain inflation sustainably at the target," the BoE says. 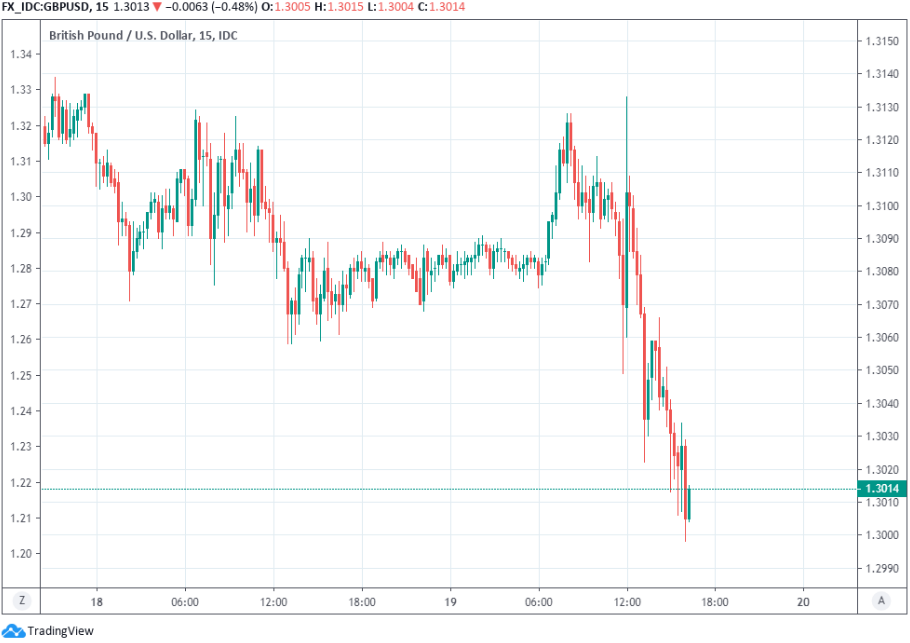 "While recent domestic data have slightly undershot the MPC's prior expectations—it has revised down its forecast for GDP growth in Q4 to 0.1%, from 0.2%—“tentative” signs of stabilisation in global growth and the initially favourable market reaction to the Conservatives’ election win has left it still expecting a material improvement in GDP growth early next year," says Samuel Tombs, chief UK economist at Pantheon Macroeconomics.

Pound Sterling found support on the charts earlier in the Thursday session after bringing a two-day run of punishing, Brexit-related losses to an end and has since begun to advance on both the Euro and Dollar as market concerns about the prospect of an imminent interest rate cut fade.

Two members of the MPC surprised markets in November by voting for an immediate rate cut to 0.50% and given the further signs of a slowdown in the economy that have materialised since then, some had been concerned that other members of the committee might vote to cut rates this month.

"The BoE needs a large rebound in PMIs to keep its forecasts on track and appears to be assuming a 'deeper' future UK-EU trading relationship than PM Johnson plans. We think the risks lie towards cuts to BoE growth forecasts in January," says Robert Wood, an economist at BofA Global Research, in a note to clients. "We expect two BoE rate cuts next year, the first one in May." 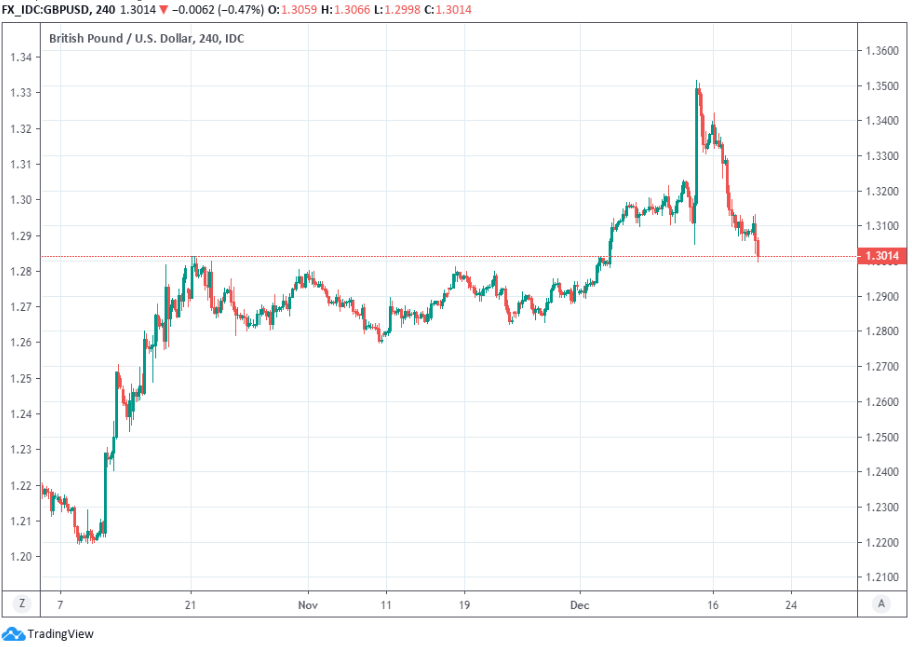 The economy is on track to miss the consensus for growth of only 1.3% for the year and IHS Markit PMI surveys are pointing to a final quarter contraction. November retail sales figures added to the downbeat mood Thursday when they revealed a surprise 0.6% fall in high street spending for last month.

Sterling is unprepared for a rate cut at any point in the next six months so any hints from BoE officials that one might be becoming likely would be sure to weigh on the British currency, which is currently being propped up by technical support levels on the charts.

"OIS pricing is pointing to around a 60% chance of a Bank rate cut by mid-year (Jun) and three-quarters by Nov. In the aftermath of the election, odds stood at 50% and 16%, respectively. Sterling has now erased all of its post-election gains, and then some," says Shaun Osborne, chief FX strategist at Scotiabank. "Further losses beyond this point may see the GBP crash through the ceiling of the 1.28 to 1.30 consolidation band which followed its mid-Oct rally and settle somewhere within this channel."

Osborne says the Pound-Dollar rate should find support around the 1.3058 level, which coincides with the 20-day moving-average of prices, but that it'll also meet resistance on any recovery to the 1.32 area. 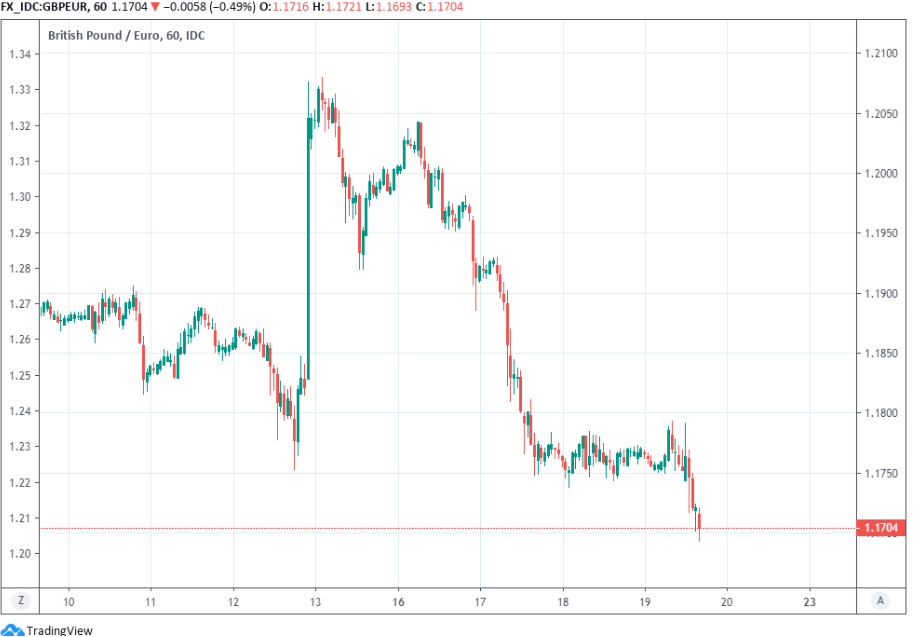 The Pound-to-Euro rate fell through support located around 1.1734 on the charts this Thursday but is said by technical analysts at Commerzbank to be at risk of another leg downward to the 1.1667 level.

"EUR/GBP swiftly bounced off its current December low at .8239 and is now flirting with the mid-November low at .8522. Above it the October low, November 22 high and 55 day moving average can be spotted at .8571/.8600. This area we expect to cap," says Axel Rudolph, a technical analyst at Commerzbank.

Rudolph says the 1.1627 level should provide enough support to the Pound-Euro rate for it to arrest any fresh declines but he also says a daily close below 1.1752 would "neutralise" the bank's bullish technical outlook for the Pound.

Markets will focus on Westminster Friday where Prime Minister Boris Johnson is expected to table amendments to the Withdrawal Agreement Bill. One will "legally prohibit" an extension of the Brexit transition period beyond the end of 2020 in a move the market sees as creating a new 'no deal' Brexit cliff edge.

That will begin a long process toward ratification of the pact struck between him and the EU in October, which is expected to be wrapped up just in time for the country to formally exit the EU on January 31.

James Forsyth, political editor of The Spectator, reported Wednesday the government intends to get the withdrawal agreement through the House of Commons by January 09. However, the European parliament will not vote on the pact until Wednesday, 29 January. A January exit will give way to another year-long period of negotiations but in the meantime, Sterling will be guided by technical factors on the charts and economic data.

"Our 12 month forecast of GBP/USD1.36 assumes a Brexit deal will be in place by the end of the year. However, we maintain the view that GBP/USD could drop towards 1.15 on a no deal Brexit," says Jane Foley, a strategist at Rabobank. 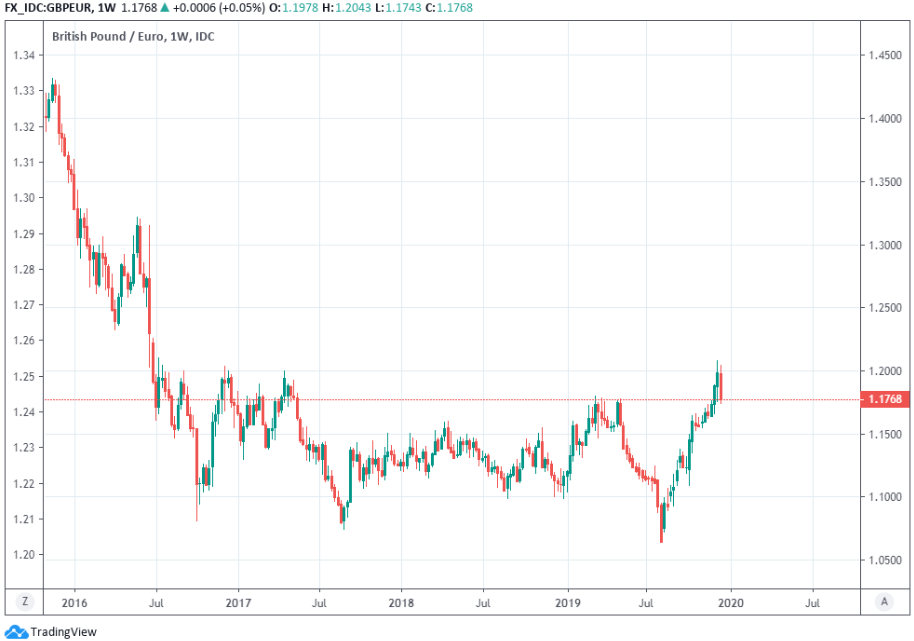