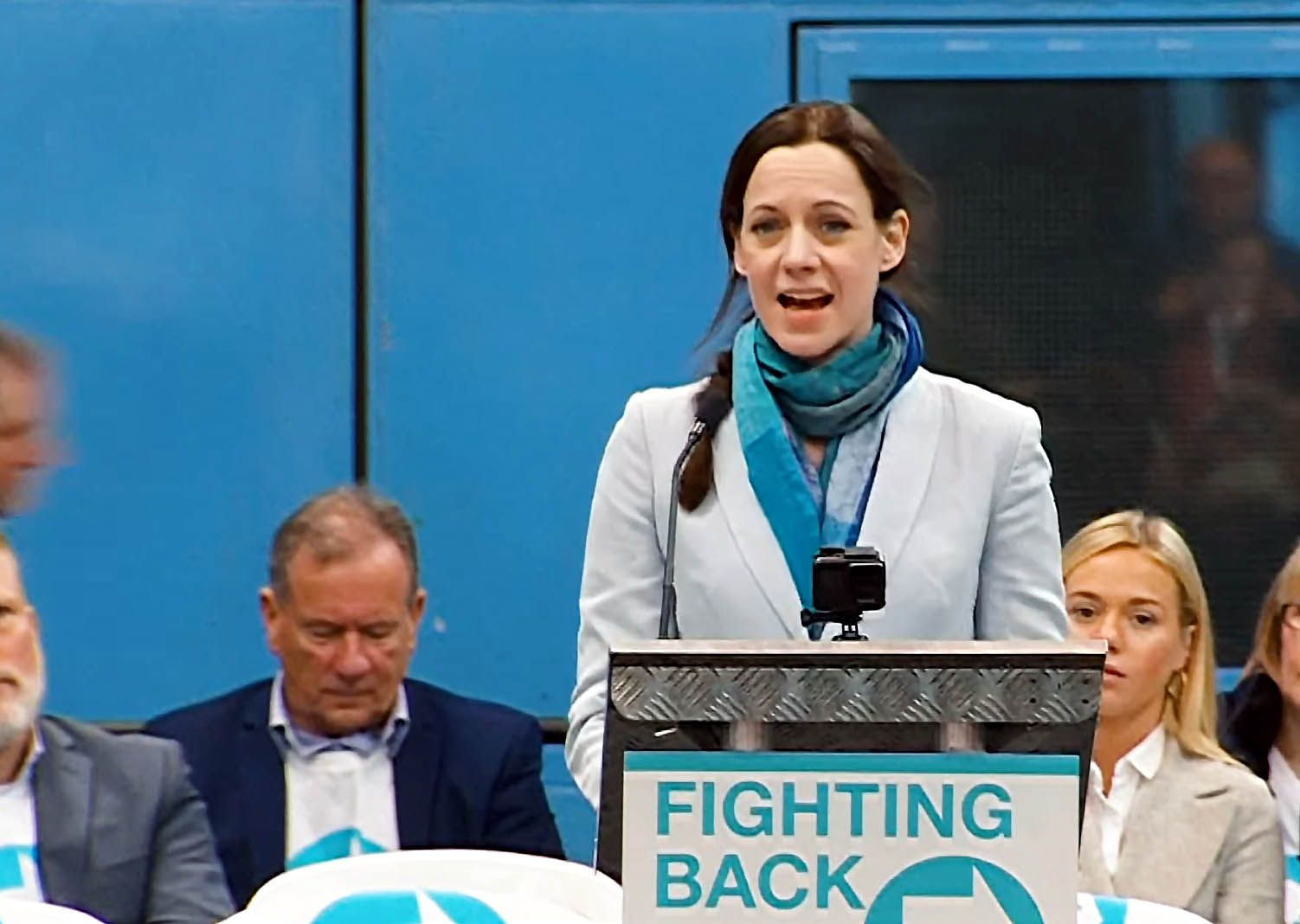 Above: File image of Annunziata Rees-Mogg, who resigned the Brexit Party on Thursday. Image: Copyright Pound Sterling Live. Still courtesy of The Telegraph.

- Odds of Cons. majority elevated ahead of weekend

- Immediate risk for Sterling is batch of weekend polls

The implied odds of a Conservative majority being achieved at next week's election rose above 70% for the first time over the course of the past 24 hours, a development that coincided with fresh multi-year highs in the British Pound.

The Pound-to-Euro exchange rate rallied to a two-year high at 1.1861 after the implied odds of a Conservative majority rose to 72% on the Betfair Exchange, the highest level recorded on the exchange since the election campaign began.

Sterling is firmly fixated on the election outcome, with the market rising alongside improving odds for an outright Conservative victory. The judgement by foreign exchange market participants is that a Conservative majority would allow for the swift passing of a Brexit deal: "With the Conservative Party leading the polls, GBP is likely to gain over the 1-2 months as we get more clarity on the Brexit path," says Petr Krpata, Chief EMEA FX and Rates Strategist at ING in London, who is forecasting Pound-Euro to rise to 1.2050 in 1-2 months.

The size of the majority could also matter for the Pound, as the passing of a subsequent trade deal with the EU would presumably pass through Parliament unhindered if Johnson has a sizeable majority, whereas a small majority leaves Johnson exposed to Eurosceptics in the ERG wing of the party who will want to see as much divergence as possible between the UK and EU rules.

This suggests that a big factor for the market would be the size of the majority: the larger the majority the less the chances of any trade deal being bogged down in the UK Parliament become, thereby erasing any fears for a 'no deal' on trading arrangements in 2020/2021. "We see it as highly unlikely for the UK to conclude such complex deals within such a relatively short period of time," says Krpata. "Hence, the extension of the transition period beyond 2020 (likely to 2022 as a starting point) will be necessary, in our view."

News of a number of defections from the Brexit Party through the course of Thursday might have boosted odds for a Conservative majority. Annunziata Rees-Mogg, Lance Forman and Lucy Harris announced they had resigned the party to back Prime Minister Boris Johnson’s push to “get Brexit done”.

Rees-Mogg said the Brexit Party was splitting the vote of leave supporters, and therefore putting Brexit itself at risk. Should the Conservatives pick up some additional leave voters in key marginals as a result of a swing away from the Brexit Party, then they could pick up a few more seats, particularly in the north of England.

Readers should be aware this weekend will see the release of a batch of fresh polls, that should shine further insights onto how next Thursday's vote might play out, and any negative news could set Sterling back on Monday.

The Pound has rallied amidst indications from two recent polls that suggested the rise in Labour's vote share has stalled, leaving a 9-10 point gap between them and the Conservatives; the rule-of-thumb is that a gap of 7 points and above should result in a majority. A new poll from ComRes cemented the view that the Conservatives are on track to record a majority showing the Conservatives polling on 42% against Labour's 32%. Seat projections based on a margin of 10 points show the Conservatives winning a comfortable majority. 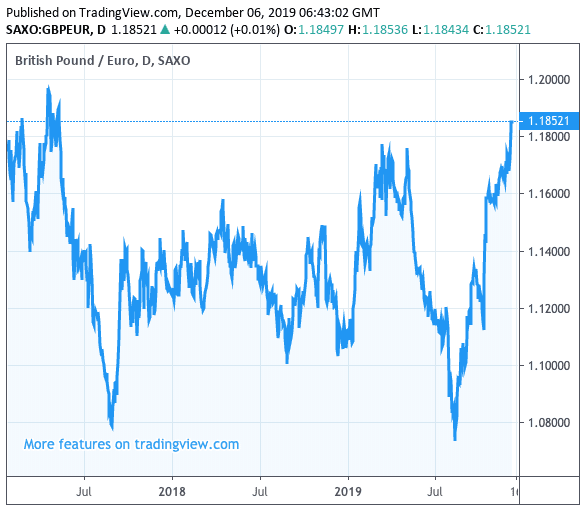 Above: GBP/EUR trades at a two-year best

This is the first time ComRes has shown survey respondents their own ballot paper and asked them to give a preference based on all the candidates standing in their particular constituency.

"Unlike in 2017, which ended in a hung parliament, Labour does not seem likely to close the gap with the Conservatives. If Johnson wins, expect medium-term UK economic growth to far exceed the European average for around 18 months," says Holger Schmieding, Chief Economist at Berenberg Bank.

But if the weekend polls suggest Labour's recent trend higher has in fact not stalled, then foreign exchange markets might judge that the Conservatives could struggle to gain a majority.

Sterling could then start the next week in the red as markets adjust in line with falling odds of a Conservative majority.

"There should be some degree of hesitancy when drawing parallels between the current polling and that seen prior to the 2017 election. For markets, anything other than a Conservative victory would be deemed as a negative, with a hung parliament leaving Johnson scrambling to form a government with parties which have rejected the deal Boris is pushing. There is uncertainty in every scenario, yet with Johnson’s deal providing the one clear pathway to progress on this Brexit pathway, the circa 10-point lead by Johnson certainly does ease fears of a last minute resurgence from Labour," says Joshua Mahony, Senior Market Analyst at IG in London.

"A Conservative majority is far from guaranteed. If Conservatives do not secure a majority, the Bank of England may cut rates as early as December amid uncertainty over next steps, which could involve a second referendum, although a “no-deal” Brexit is also still possible in this scenario," says Erik Nelson, Macro Strategist with Wells Fargo.

However, should the weekend polls confirm the gap between the two biggest parties is in fact consistent with a Conservative majority, Sterling could add to its gains.

We also sense that the Pound's current adjustment higher for a Conservative majority outcome might be close to running its course: in short, the outcome could well be in the price of the Pound already and upside impetus is at risk of fading.

"We like to “fade the optimism” around a strong Conservative election result. Buy the rumour, sell the fact," says Lund in a note to clients on Friday.

As mentioned, Sterling has been rising as market become more confident that the Conservatives will walk away with a majority next week. Therefore, the Pound is reacting now.

Therefore, when the result is actually released, and it is what markets were expecting, the Pound may not move at all. Indeed, what often happens in such scenarios is a currency can give back some of its losses.

However, the losses would be expected to be relatively shallow and of little consequence on a broader timeframe.

"The UK election on Thursday will also be crucial and we think that markets will generally cheer on a positive result for the Conservatives (Brexit Watch: Defining December decision). Clarity is all that matters on the Brexit narrative. Uncertainty will likely fester into 2020 no matter the result of the election as a lot of roadblocks are still ahead even with a Brexit deal. A new trade deal with the EU needs to be negotiated quickly," says Lund.

The Canadian Dollar Is Not Out of the BoC's Woods Yet, Despite Strong November R…