- But caution urged as vote still two weeks away

- Pound to remain a slave to polls

The Pound-to-Euro exchange rate rallied to its highest level since May on Thursday, in the wake of a new poll that suggested Boris Johnson was on course for a commanding win at the December 12 General Election.

The YouGov MRP for the Times showed the Conservatives are on track to win 359 seats, with Labour down to 211.

The market pays particularly close attention to the MRP model because it was this model that accurately predicted a hung parliament in 2017, and markets have therefore attached great weight to it. "We were looking forward to the results, as the model was the only one correctly predicting that Theresa May would lose her absolute majority in 2017. The model is different from traditional opinion polls/seat projections, as it makes its predictions based on a bottom-up approach rather than topdown," says Kristoffer Kjær Lomholt, Senior Analyst at Danske Bank. 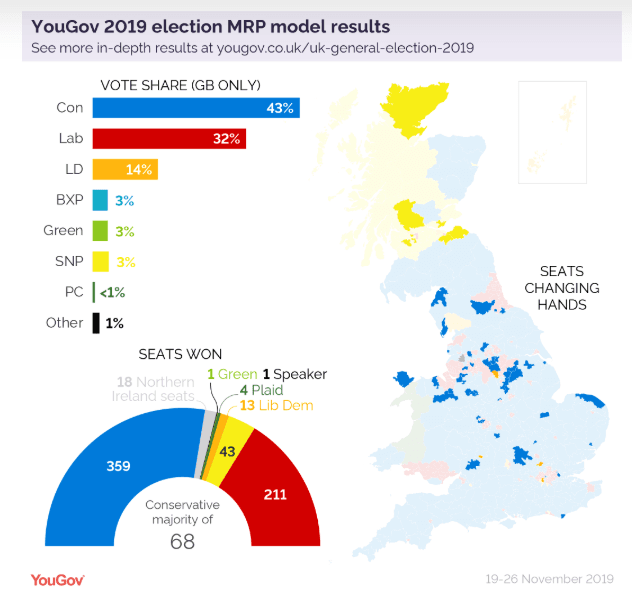 The Conservatives would win 359 seats, Labour 211, the SNP 43 and the Liberal Democrats 13 if the election were held today, according to the seat-by-seat analysis.

Sterling "blipped higher after the YouGov poll indicated that the Conservatives would be expected to garner a significant majority at the 12 December 2019 polls. Expect investors to continue to trade around ensuing headlines for the Pound," says Terence Wu, FX Strategist with OCBC Bank. 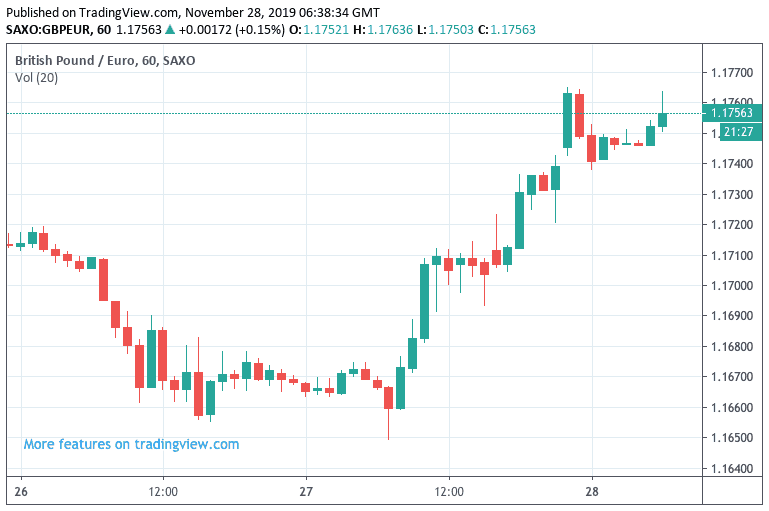 Above: Sterling against the Euro over the course of the past 24 hours.

We do urge readers to maintain a high degree of caution to Sterling when it comes to the polls. The key difference with the latest YouGov MRP poll vs. the infamous 2017 version is that the 2017 prediction was released 2 days prior to the election. This one is two weeks prior, so things could still change.

And, the trend is polling has been clear over recent days in that the Labour Party continues to close the gap on the Conservatives. The latest Savanta ComRes poll for the Daily Telegraph newspaper on Wednesday showed the Conservative's lead has slipped to just seven points.

According to the YouGov MRP model, anything below a 7% lead takes the country into hung parliament territory where no one party has a majority.

"If Conservatives win the general election, a clearer Brexit path will be paved," says Citibank in a briefing to clients of their Wealth Management unit. "If the general election result in hung parliament, nothing is resolved and Brexit remains in limbo."

Under a hung parliament Citibank say "we are back to square one, nothing is resolved and Brexit remains in limbo," say Citibank. GBP/USD is forecast to slip back into a 1.22-24 range.

Following a strong start to the week Sterling fell sharply on Tuesday after a poll by Kantar shows the Conservatives to be on 43% (-2), Labour 32% (+5), Liberal Democrats 14% (-2) and Brexit Party 3% (+1). This means the Conservative's lead on Labour has swung from 18 last week to 11 this week, suggesting momentum is now fully behind the Labour Party.

"A hung parliament would prolong the uncertainty and once again raise the tail risks of both “Remain” and “no deal.” We expect the heightened uncertainty would essentially reverse the recent inflows and push cable back to 1.25," says Michael Cahill, an analyst with Goldman Sachs.

In a sign of nerves amongst the Conservatives, Prime Minister Boris Johnson’s adviser Dominic Cummings has warned the upcoming election is likely to be “much tighter” than polls might suggest and urged them to persuade their friends to vote Conservative.

"You will see many polls in the coming days. Some will say Boris will win. Trust me, as someone who has worked on lots of campaigns, things are MUCH tighter than they seem and there is a very real possibility of a hung parliament," Cummings wrote on his personal blog on Wednesday.

Insiders appear worried that momentum is not currently with the Conservatives, and that the size of the majority will therefore likely be much lower in YouGov's next MRP poll.

If this is indeed the case, Sterling will likely reverse recent gains, and could even start trending lower.

"The headline prediction of a 68 seat Conservative majority is toward the higher end of expectations and GBP rallied accordingly. It is worth bearing in mind, however that the model’s forecast slips into hung parliament territory if the Conservative poll lead falls to 7pts from the 11pts in the survey that underlies the predication, which still appears to be the trend in conventional polls," says Adam Cole, a foreign exchange strategist with RBC Capital Markets.