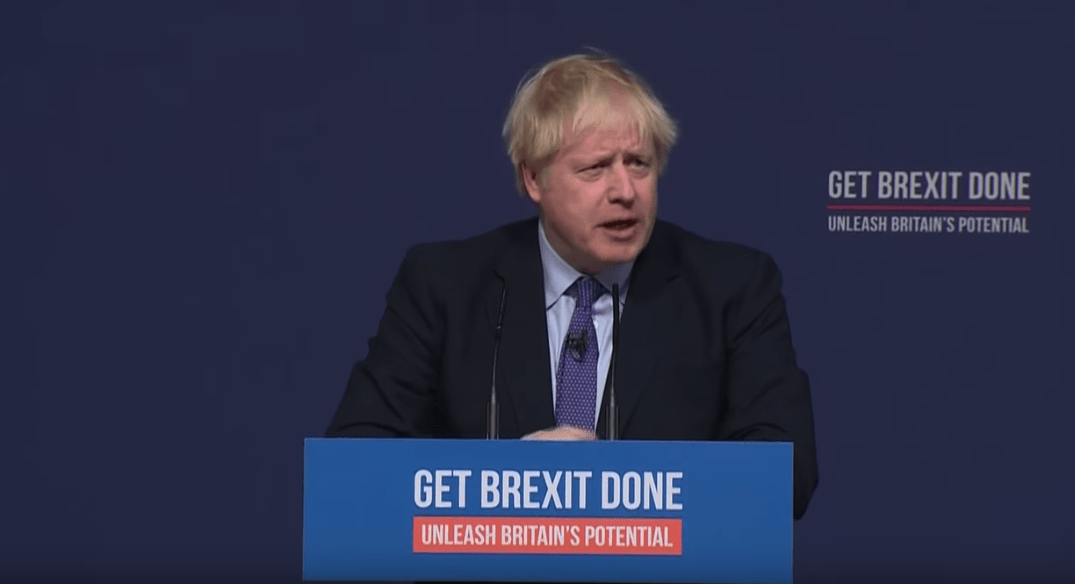 - Soft start to week for Sterling

- But losses expected to be limited

- Conservatives on course for majority in election

- Sterling to be contained by memories of 2017

The British Pound starts the new week on a firm footing, and foreign exchange analysts expect the currency to ultimately remain supported against its major rivals as polling data confirms the Conservative Party remains on course to secure a majority in the December 12 General Election.

The Pound is higher against all nine of the major G10 currencies on weekend news that the first election model that predicts seats based on polling data shows the Conservatives would win a 48 seat majority.

Datapraxis ran 270 000 YouGov interviews through their own predictive model to get an accurate feel of how polling numbers might translate into seats under the country's first-past-the-post system.

"At the mid-way point of this fateful election campaign, my firm Datapraxis is publishing what we believe to be the first really authoritative estimates of the state of the race," says Paul Hilder, CEO of Datapraxis. "If this outcome comes to pass, it would be a chest-thumping victory for Johnson and the hard Brexiteer strategems of Dominic Cummings. They would have their mandate to “get Brexit done,” and be liberated to pursue their whims and fantasies in the new Parliament - perhaps even taking the UK out of Europe without a trade deal by the end of next year."

"This is one poll that GBP markets will need to watch. 48 majority sufficient enough to be seen as a stable working government. But this could fall. Recall Theresa May was expected to get a 100+ majority, Anything below 15 and we’re back to counting MPs... all to play for GBP," says Viraj Patel, a foreign exchange strategist with Arkera.

Datapraxis have based their seat modelling on the MRP model (Multilevel Regression and Post-stratification) used at YouGov, who were the most accurate pollsters in the 2017 General Election. The result of YouGov's MRP model will be releaed at 10PM on Wednesday, and we expect this event to be one of the highlights of the week for Sterling.

Looking at the polling numbers, a poll-of-polls featured in The Telegraph this weekend suggests the Conservatives are on course for a 64 seat parliamentary majority: 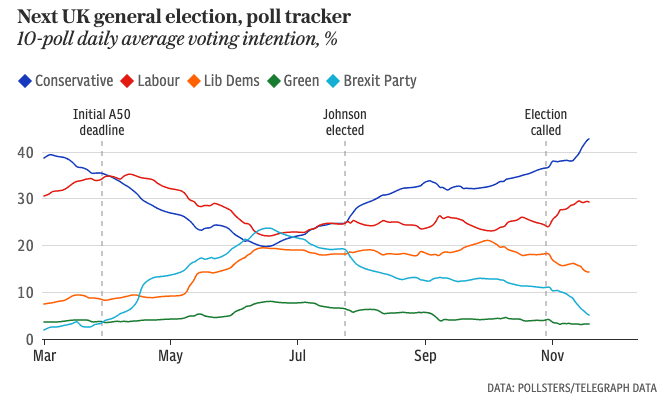 Image courtesy of The Telegraph

Foreign exchange markets are currently seeing a Conservative majority as being supportive for Sterling, with traders bidding the currency higher in anticipation of a swift resolution to Brexit should Boris Johnson achieve full control the House of Commons. The continuity they represent for the economy is also seen as attractive, particularly when contrasted to the huge tax-and-spend policies being proposed by the opposition Labour Party.

Another 'hung parliament' in which no party commands a majority is also seen as a negative outcome for Sterling as it would invite many more months of uncertainty that will likely hold business investment bank and lead to a further slow down in the economy, leading to potential Bank of England interest rate cuts in 2020. Currencies tend to fall when their issuing central bank embarks on a cycle of interest rate cuts, and we would therefore expect to see Sterling fall in 2020 if this were indeed the case.

Gains Capped by Lingering Fears of a Repeat of 2017

Despite increasing odds for a Conservative majority, it does appears Sterling is unwilling to go much higher, and we believe markets are still wary the Conservative lead will slip as was the case in 2017, and the final result will be a great deal tighter.

"It’s worth noting that it was only after the manifesto launched in 2017 that polling started to truly tighten up," says Jordan Rochester, a strategist at Nomura, the investment bank. "I would not recommend a fresh GBP long position here as it may only take a few polls showing a Labour party bounce or indeed another gaffe moment in UK politics from the Conservatives to put the market’s current base case in doubt and with it cause GBP’s recent grind higher to come undone."

While there is certainly a great deal of caution being reflected by market sentiment towards Sterling, it is worth recalling that the trajectory of the polling in 2019 is very different to that of 2017.

In 2017 May's Conservatives enjoyed a whopping lead over their Labour rivals at the start of the campaign, from here the lead declined in a steady trend. At the half way mark May's polling numbers were in free fall. 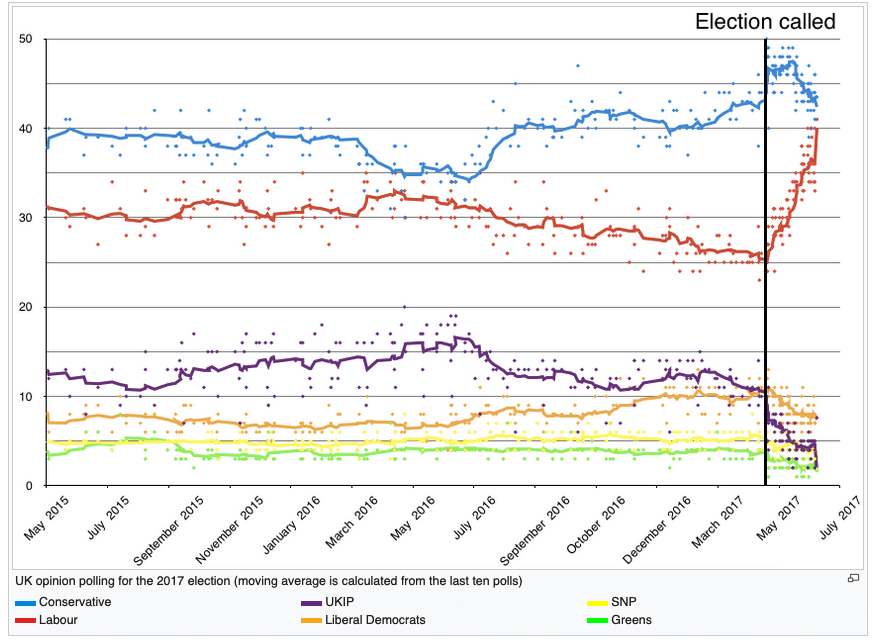 The opposite appears to be the case thus far in 2019: the Conservative lead has been steadily growing, and if this trend continues markets might become more comfortable in bidding Sterling higher in anticipation of a solid Conservative win as per the current market dynamics regarding Sterling and the polls.

A key moment in the 2017 campaign came following the release of the Conservative manifesto that can only be described as an 'omni shambles', with policies such as the so-called dementia tax and a proposed removal of the triple-lock on pensions attracting negative publicity.

Subsequent reversals on unpopular policies cast doubts on May's campaign message that she was the strong and stable candidate who would deliver Brexit, and the election ultimately resulted in the Conservatives winning the most seats, but not enough to command a majority.

Sunday saw Boris Johnson launch the Conservative manifesto, and it appears that the lessons of 2017 have been launched. The manifesto is devoid of any exciting new policies, instead the aim is to present something that does not detract from the campaign's central message, and that is to "get Brexit done."

The more pitfalls the Conservatives are able to avoid, the better their chance of securing a majority are.

Indeed, the Labour Party have done quite the opposite, by announcing a manifesto that certainly appears radical owing to promises to raise taxes and increase spending substantially.

Noting that the manifesto failed to deliver any meaningful upside traction, the party then announced an additional spending of £58BN on Sunday when they promised compensation to more than three million women who lost out on years of state pension payments when their retirement age was raised.

The fresh policy was not contained in the initial manifesto, and is therefore uncosted.

"The televised debate and the manifesto have not substantially improved the Labour Party's credibility, i.e. Jeremy Corbyn gives the impression of desperately trying to attract voters, which, however, is likely to fail due to the lack of realism. The UK Pound remains remarkably unaffected by the parties' respective election campaigns and might appreciate more significantly over the coming weeks as a solid majority for the Tories appears to be emerging," says Marc-André Fongern, G10 analyst at MAF Global Forex.